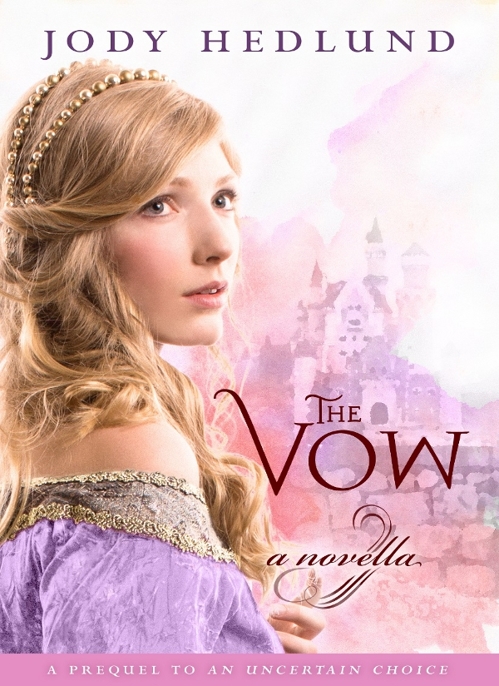 By payment of the required fees, you have been granted the non-exclusive, nontransferable right to access and read the text of this e-book on-screen. No part of this text may be reproduced, transmitted, downloaded, decompiled, reverse engineered, or stored in or introduced into any information storage and retrieval system, in any form or by any means, whether electronic or mechanical, now known or hereinafter invented, without the express written permission of Zondervan.

“He loves me.” I plucked a petal off a daisy.
“He loves me not.” I plucked off another and let it drift down the flank of my horse and to the trodden path.

“He loves me.” The delicate petal came loose just as Lord Caldwell glanced over his shoulder, looking back from his steed. The brown eyes that met mine were as dark and rich as the leather of his jerkin. He offered me a smile, one that softened the angular lines of his face.

My stomach flipped like an acrobat twirling head over heels, and somehow I managed to smile back.

“How do you fare, Lady Rosemarie?” he asked.

“I’ve never had a more delightful hunt.” My answer seemed to please him, for his smile widened before he resumed his forward position.

I released a slow sigh and reveled in the entirely new but wondrous sensations I’d experienced since the moment Lord Caldwell arrived in Ashby six days ago with his parents.

The noble couple rode ahead in the hunting party with my parents, their laughter and chatter rising above the hoof beats of our horses, the crunch of twigs, and the rattle of leaves in the breeze. The Baron of Caldwell’s estate and lands bordered Ashby’s to the south, and although visits were infrequent, the baron had always been on amicable terms with my father.

As a young child, I hadn’t thought much about their friendship or the tall, brown-haired boy who always accompanied the baron. But this visit, when Lord Caldwell’s gaze first landed upon me, those dark eyes had made me take notice — and showed that he’d been surprised by how grown up I’d become, and that he liked those changes.

At fourteen, I was no longer a child. I glanced down at my recently tailored riding habit, at the changing shape my bodice laces accentuated, at the new waves to my fair hair. Even I could see that over the past year I’d changed.

I pressed the bouquet of daisies to my nose and drew in the lingering fragrance, marveling that the kind, handsome man in front of me thought I was attractive. He’d done little during his visit but pay me attention.

I hid another smile in the sweet array, letting the feathery petals cool my flushed cheeks. I allowed myself to stare at his back again as I had the entire ride, at his straight shoulders and regal bearing. He didn’t appear to be a man of great physical power, but he held himself with confidence and strength.

After less than a week, it was too early to be thinking that he loved me. Even so, I couldn’t stop from considering the fact that he was a fine man, the kind of man who would make a good husband someday. Did my father and mother think the same thing?

Ahead, they rode side by side, close enough that they were holding hands. I glanced over mother’s elaborate gown, a burgundy damask in a pomegranate pattern and trimmed in velvet — a recent gift from my father. After many years of marriage, my father still lavished my mother with gifts, both large and small. Every day, he made a point of showing her just how much he adored her.

My mare dipped her head as the woodland around us gave way to a clearing alongside a brook. The canopy of leaves opened to the blue sky, and the warm summer sunshine spilled upon
me. The servants surged ahead, leading the hunting dogs to the trickling, clear waters.

Before one of the servants could assist my dismount, Lord Caldwell dropped from his saddle and was at my side. He held out his hand and smiled. “May I?”

At the affection in his eyes and the admiration in his expression, the whole world turned a hue brighter: the patches of moss covering the boulders were a stunning green, the roses growing in the cracks of stone a brilliant pink, and the wild lupine that bordered the woodland a vibrant purple.

I hesitated only a second before placing my gloved hand into his. His fingers closed firmly around mine, sending a heated ripple down my arm and straight to my heart. I’d never before touched a man, never before been in such close proximity.

As I took the offer of his help and slid out of my sidesaddle, his other hand came to my waist. The pressure there stole my breath. When my feet made contact with the rocky ground, he steadied me then removed his hold. Although his hands no longer held me, his touch lingered so that I could think of little else. I couldn’t move. And he didn’t step back either.

“My lady,” he said breathlessly.

“Yes, Lord Caldwell?” Was my presence having the same effect upon him that his was upon me?

I couldn’t. Could I? It was much too familiar. My mother only called my father by his Christian name when she thought they were alone. In fact, she rarely addressed him by anything but Lord Montfort. As earl of Monfort and all of Ashby, he was entitled to the highest respect. Surely Lord Caldwell deserved the same respect as the eldest son, making him the future baron and heir of all his father’s vast holdings.

I peeked sideway to where my mother had dismounted, and to my surprise I found her watching me, curiosity and pleasure
in her blue eyes that were so much like mine. I’d received not only my blue eyes from her, but also my golden hair.

Although my mother hadn’t brought up the topic of marriage yet, I knew it wasn’t too early to start considering a suitable partner. I was the only child and heir to a sizeable fortune. The responsibility of ruling Ashby would one day fall upon my shoulders. I not only needed a husband who could help me rule my people fairly and wisely, but I needed to have children of my own who could inherit Ashby after me. Without an heir, the high king would give the land to neighboring nobility, such as Lord Witherton, who’d gained notoriety for treating his people cruelly. I certainly couldn’t allow even the smallest portion of Ashby to fall into his hands.

My father stepped behind my mother and wrapped his arms around her. She melted into him, leaning back to receive a kiss. I quickly averted my gaze, embarrassed by their open display in front of Lord Caldwell, even though I was accustomed to it.

The truth was, aside from all the practical reasons I needed to find a husband, I wanted to have a marriage and love like the one my parents shared.

“You don’t have to call me Thomas,” Lord Caldwell said as though sensing my hesitancy with his request. “Only if you want to.”

I nodded, warmth pooling in my middle. “I shall consider it.”

His smile returned with dazzling brilliance.

My acquiescence was tantamount to admitting that I favored him.

He gathered the reins of my mare along with his steed’s, and we ambled toward the edge of the brook. “My father and mother must return home on the morrow.”

At his declaration, I almost stumbled. “So soon?” The words came out before I could stop them.

He gave the horses rein to lower their heads and drink before he replied. “Will you miss me, my lady?”

I rubbed my mare’s neck, and felt her muscles stretch taut. My mind raced for an appropriate answer, one that wouldn’t appear overly eager or naive — although I couldn’t deny that I felt both. “Would you miss me . . . Thomas?” His name came out as the barest of whispers, but his head snapped up as though I’d shouted it.

If I’d thought the brown of his eyes dark before, they were now the shade of a woodland at dusk. The intensity there spoke of a desire I didn’t yet understand. After all, Thomas was four years my senior, clearly a man who was ready for a serious relationship, and one not to be trifled with child’s play.

I dare not lead him on. I forced myself to hold his gaze, willing him to see the sincerity of my blossoming feelings for him. The silly acrobat in my stomach started doing flips once more.

“My lady,” Thomas whispered hoarsely as he stepped toward me. “I don’t know how I could let a day pass by without having the chance to be with you.”

I trembled under such a revelation.

He lifted a hand as though to brush my cheek. His fingers hovered so that I was tempted to lean into them, to feel them against my skin. But after a moment, he let his arm drop and took a quick step back, diverting his attention once again to the horses.

I released a slow breath.

He knelt next to the water’s edge, cupped his hands, and filled them to overflowing. “Perhaps I can speak with your father about extending my visit.”

He drank from his hands, and when he finished he filled them again and held them out for me. His eyes invited me to
drink, and by so doing admit my pleasure in his idea to stay longer.

I chanced another glance at my parents, and this time my father was watching my interaction with the young nobleman. With his fingers once again laced with my mother’s, his long robe flowed about him and the ostrich feathers in his felt cap fluttered in the breeze. As soon as he saw that I’d noticed his scrutiny, he looked away, almost as though he was choosing to ignore us and by so doing, giving me permission to engage with Thomas in whatever manner I saw fit.

Would he truly allow me to drink from Thomas’s outstretched hand, put my lips against his skin, without any censure?

I had only a moment to consider my father’s strange behavior before a loud crashing in the brush on the opposite side of the brook drew my attention.

Pleasantly Dead by Alguire, Judith
The Good, the Bad, and the Naughty by Jessica Frost
A Christmas Bride by Susan Mallery
Deep Down True by Juliette Fay
The Shadow of Albion by Andre Norton, Rosemary Edghill
Pahnyakin Rising by Elisha Forrester
vampires mage 02 - witch hunter by crawford, c n
Rivers: A Novel by Michael Farris Smith
Wild About The Bodyguard by Tabitha Robbins
Caught in the Crosshair by Han, Barb
Our partner