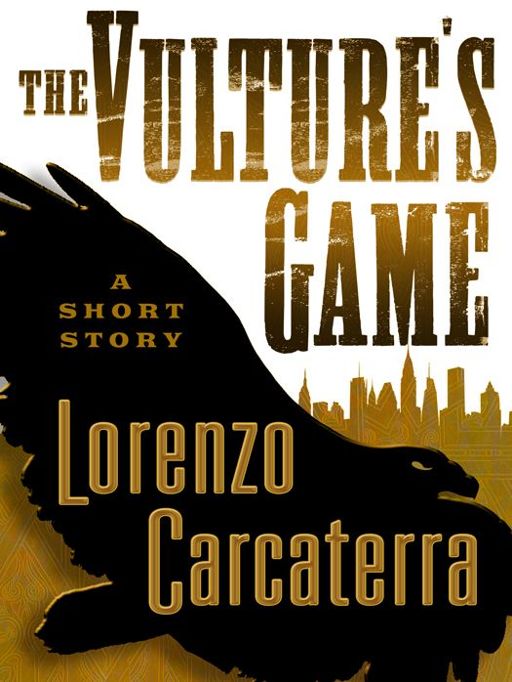 The Vulture’s Game
is a work of fiction. Names, characters, places, and incidents are the products of the author’s imagination or are used fictitiously. Any resemblance to actual events, locales, or persons, living or dead, is entirely coincidental.

B
ALLANTINE
and the H
OUSE
colophon are registered trademarks of Random House LLC.

This book contains an excerpt from the forthcoming book
The Wolf
by Lorenzo Carcaterra. This excerpt has been set for this edition only and may not reflect the final content of the forthcoming edition.

Excerpt from
The Wolf

The late-model sedan was parked under an overpass near the 96th Street exit of the West Side Highway. Headlights off, tinted windows rolled up, and eight-cylinder engine idling, white puffs of smoke rising from dual exhausts. Two men were in the front seat, one talking on a cell phone, the other resting his head against soft leather, eyes closed, looking to shake off the effects of too much wine and too little sleep. A light rain dotted the windshield and rear window.

The first man snapped the cell phone shut and tossed it on the dashboard. “I knew as much before I talked to him as I do now,” he said. “I mean, shit, is it too much to ask when the guy is supposed to show and what we’re supposed to do when he does?”

“I only heard your end of it,” the man behind the steering wheel said, eyes still closed. “Maybe it’s one of those situations where the less we know, the better off we are. You know, in case whatever is
supposed
to happen
doesn’t
and the whole thing heads sideways.”

“Maybe so, Jerry,” the other man said, “but it would be nice if we at least were told
something
.”

“You were on the call for at least ten minutes,” Jerry said, “and you didn’t say much from your end. Which means you must have gotten a heads-up on a few things.”

The second man took a few deep breaths, gazing out the passenger side window, his thin features highlighted by the glint of city lights. “Some guy is supposed to show up,” he said, “a capo from Marelli’s crew. He drops a leather satchel on the hood, then turns and walks away. We wait five minutes, then grab the satchel and toss it in the backseat. We head back to Queens, park the car on Jackson Avenue, leave the satchel where it is, and meet up back at the restaurant. That was the plan laid out the other night and that was the plan just retold to me on the call.”

“They give you a tease as to who the guy might be?” Jerry asked. “Or what the hell is in that satchel?”

“Not a clue either way,” the man said. “Here I am closing in on fifty and in this racket since I was old enough to crack a parking meter and I’m still no better than a damn messenger.”

He paused and turned to look over at Jerry, who was sitting up now, searching through his pockets for a pack of gum.

“You can’t sit there and tell me shit like this doesn’t burn your ass as well?”

Jerry shrugged. “Maybe I didn’t go into this expecting as much as you did. We’re muscle hire for a guy who made himself rich working real estate and construction swindles. We’re never going to be more than that, never going to be a part of his inner circle. We are who we are, Bobby, and we’re paid to do what we do. And maybe it’s time for you to begin to expect nothing more than that.”

“You mean like that job last month?” Bobby said. “We go out, torch some poor bastard’s house all because he wouldn’t give up air rights to our guy. That old man was no threat to anybody and he was as likely to sell air rights as you and me are to be sworn in as U.S. marshals. But his blood is on us. We’re the ones who set the fire that killed him. The guy that sent us? He was at some swank to-do on Park Avenue. With the mayor, no less. Read about it the next day in the papers. The old man we toasted got the front page, our guy gets Page Six, just the way he likes it.”

“Don’t bang yourself up over that,” Jerry said. “The old man was supposed to be on a golfing vacation in Florida, not in the living room watching a ball game.”

“But he
wasn’t
,” Bobby said. “And six will get you twelve our guy didn’t lose any sleep over the way it played out.”

“And neither should we,” Jerry said. “Look, if all this is eating at you as much as it sounds like it is, why don’t you walk away? You got some money put aside. Take it and find a place where none of this shit matters.”

The satchel landed with a soft thud in the center of the hood, startling both men. They each reached for guns jammed against their hips and tried to make out the figure standing on the left side of their car. The rain was coming down heavier now and their breathing had fogged up the windshield and side windows, limiting their visibility. They could barely make out the figure of the man as he disappeared further into the darkness.

“Hang on until we’re sure he’s gone,” Jerry said. “Then grab the bag so we can
get the hell out of here.”

“Why wait?” Bobby said, and snapped open the passenger door and stepped out of the car. He held a gun in his right hand and reached for the satchel resting on the center of the hood. He clutched it in his left hand, glancing around the empty street as he did.

“Looking for me?” I said. I was standing by the rear of the car, still covered by shadows, my hands resting comfortably by my side.

Bobby lifted the gun and pointed it in my direction.

“Don’t bother with that,” I told him. “First, I’m not armed. Second, there are three shooters focused on you and your partner, ready to drop you if they suspect you’ll pull. But there’s a third that’s even more important than those first two.”

“Lean in and ask your partner to get out of the car,” I said. “Get him out here before he tries anything stupid. He needs to hear what I have to say as well.”

Jerry got out from behind the wheel and stood on the other side of the car, both front doors open, the light from inside roughly illuminating their faces. I pointed to the satchel in Bobby’s hand. “Feels light, doesn’t it?” I asked.

“That’s because it’s empty,” I told him.

“And why’s that?” Jerry asked.

“Because you weren’t sent here to pick up a satchel,” I said. “You were sent here to be killed. By the three men with scopes on your chest. It was a deal worked out by your boss.”

Jerry shifted uncomfortably, foot to foot. “Why us?”

“Who the hell is Anthony …?” Jerry asked, struggling to remember the last name.

“Contorti,” I said. “That’s the old man you two killed in the house fire three weeks back.”

“Hey, look,” said Bobby, “we had no idea that old man was going to be in that house. We were told it was an empty torch.”

I nodded. “But your boss knew he would be there,” I said.

“So me and Bobby are going down for killing somebody we didn’t know we were killing?” Jerry asked. “Is that the bottom line on all this?”

“If I wanted you dead, I wouldn’t be standing here talking,” I said.

“And so he sends
you
to talk to
me
. Come in here, my
office
, my
building
, sit across the desk from me and pretend as if we’re on equal footing. Is that the full picture or am I missing some pieces, like maybe you’re hard-ass enough to bogart me into seeing things your way?”

I shrugged. “We’re not on an equal footing,” I said. “Far from it. You’re the player here, making up your own rules as you go along, changing them as you see fit. I was simply asked to meet with you to have a conversation. See if there’s a way for both sides to do business together.”

“And why would I want to do that?” he asked, sitting in a thick leather chair, both hands resting flat on the surface of a mahogany desk that had his initials embroidered in gold lettering on the front and sides. “Why would I
need
to do that?”

“Those are both good questions,” I said. “And you’re the only one who can answer them. And your answers will decide how all this will play out.”

He stood and pushed his chair back, hard enough for it to bounce against the wall behind the desk. He glared down at me, his cheeks flushed, his right hand balled into a tight fist. He was taller than I had imagined him to be, more physically imposing, a few pounds overweight but you had to look close to notice. His fingernails were shined bright enough to almost glow, and he had the whitest teeth I had ever seen on any man. “I want you to get up now,” he said, “and not say another word. Just stand, turn, and get the hell out of my office.”

“There anything you want me to pass on to my uncle?” I asked, my hands tucked inside the pockets of my slacks, doing my best to keep my manner casual.

In those days, I copied my uncle in both dress and style, adding a few touches of my own along the way. I was a few fingers shy of six feet tall, with dark hair I kept
trimmed short and had a runner’s body, clocking in my five miles each day, rain or shine. I had always been able to keep my emotions in check and doubted anything Frank Scanlon did or said to me on that day would change that. I think it’s just an outgrowth of being an only child and suffering heavy losses at such an early age. Or maybe I was more like my uncle than I thought I was.

He nodded. “Now that you mention it,” he said, “indeed there is. You tell that old fool he wants to hardball me he needs to come in with someone who gets my attention. Now, get your ass out the door. I’m late for a meeting.”

Scanlon couldn’t hide his look of surprise. He turned his back and gazed out the large window at the vast Manhattan skyline, his hands jammed into his pants pockets. “How do you know about that?” he asked. His voice was smoother now, devoid of anger, stripped of a layer of arrogance.

“Two of your construction projects are not only over budget, they’re behind schedule,” I said. “It would be a big help to you if the unions gave you a break on the overtime hours it’s going to take to get up to speed. The go-to guy that can make that happen is Garcetti.”

“And I’m going to go on a limb here by guessing you think you can help me with that?” he said.

“You just finished telling me you had no interest in doing business with me,” I said. “So I can only figure you wouldn’t want any kind of help from someone you want nothing to do with. Unless I misunderstood.”

He stayed silent for a long moment. “Get out of here,” he said. “Now.”