Read The Wangs vs. the World Online

The Wangs vs. the World 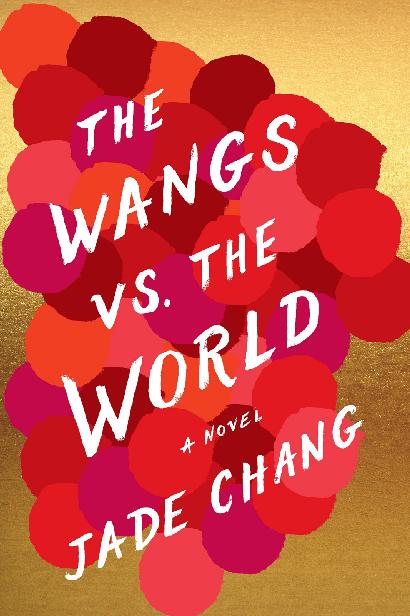 The Wangs vs. the World

A hilarious debut novel about a wealthy but fractured Chinese immigrant family that had it all, only to lose every last cent-and about the cross-country road trip that binds them back together.Charles Wang is mad at America. A brash, lovable immigrant businessman who built a cosmetics empire and made a fortune, he’s just been ruined by the financial crisis. Now all Charles wants is to get his kids safely stowed away so that he can go to China and attempt to reclaim his family’s ancestral lands-and his pride.Charles pulls Andrew, his aspiring comedian son, and Grace, his style-obsessed daughter, out of schools he can no longer afford. Together with their stepmother, Barbra, they embark on a cross-country road trip from their foreclosed Bel-Air home to the upstate New York hideout of the eldest daughter, disgraced art world it-girl Saina. But with his son waylaid by a temptress in New Orleans, his wife ready to defect for a set of 1,000-thread-count sheets, and the rest of them involved in an epic smash-up in North Carolina, Charles may have to choose between the old world and the new, between keeping his family intact and finally fulfilling his dream of starting anew in China.Outrageously funny and full of charm,The Wangs V. the Worldis an entirely fresh look at what it means to belong in America-and how going from glorious riches to (still name-brand) rags brings one family together in a way money never could. 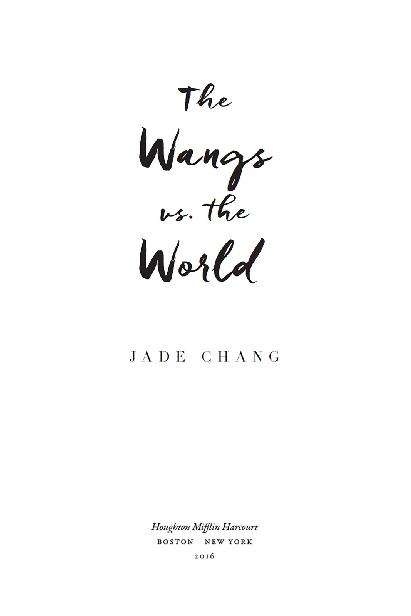 Title: The Wangs vs. the world / Jade Chang

For the Changs (all three of them)!

The future has an ancient heart.

To get rich is glorious.

CHARLES WANG was mad at America.

If the death-bent Japanese had never invaded China, if a million—a billion—misguided students and serfs had never idolized a balding academic who parroted Russian madmen and couldn’t pay for his promises, then Charles wouldn’t be standing here, staring out the window of his beloved Bel-Air home, holding an aspirin in his hand, waiting for those calculating assholes from the bank—the bank that had once gotten down on its Italianate-marble knees and kissed his ass—to come over and repossess his life.

Without history, he wouldn’t be here at all.

He’d be
there,
living out his unseen birthright on his family’s ancestral acres, a pampered prince in silk robes, writing naughty, brilliant poems, teasing servant girls, collecting tithes from his peasants, and making them thankful by leaving their tattered households with just enough grain to squeeze out more hungry babies.

Instead, the world that should have been his fell apart, and the great belly of Asia tumbled and roiled with a noxious foreign indigestion that spewed him out, bouncing him, hard, on the tropical joke of Taiwan and then, when he popped right back up, belching him all the way across the vast Pacific Ocean and smearing him onto
this,
this faceless green country full of grasping newcomers, right alongside his unclaimed countrymen: the poor, illiterate, ball-scratching half men from Canton and Fujian, whose highest dreams were a cook’s apron and a back-alley, backdoor fuck.

Oh, he shouldn’t have been vulgar.

Charles Wang shouldn’t even know about the things that happen on dirt-packed floors and under stained sheets. Centuries of illustrious ancestors, scholars and statesmen and gentlemen farmers all, had bred him for fragrant teas unfurling in fresh springwater, for calligraphy brushes of white wolf hair dipped in black deer-glue ink, for lighthearted games of chance played among true friends.

Not this. No, not this. Not for him bastardized Peking duck eaten next to a tableful of wannabe rappers and their short, chubby, colored-contact-wearing Filipino girlfriends at Mr. Chow. Not for him shoulder-to-shoulder art openings where he sweated through the collar of his paper-thin cashmere sweater and stared at some sawed-in-half animal floating in formaldehyde whose guts didn’t even have the courtesy to leak; not for him white women who wore silver chopsticks in their hair and smiled at him for approval. Nothing, nothing in his long lineage had prepared him for the Western worship of the Dalai Lama and pop stars wearing jade prayer beads and everyone drinking goddamn boba chai.

He shouldn’t be here at all. Never should have set a single unbound foot on the New World. There was no arguing it. History had started fucking Charles Wang, and America had finished the job.

America was the worst part of it because America, that fickle bitch, used to love Charles Wang.

She had given him this house, a beautiful Georgian estate once owned by a minor MGM starlet married to a studio lawyer who made his real money running guns for Mickey Cohen. At least that’s what Charles told his guests whenever he toured them around the place, pointing out the hidden crawl space in the wine cellar and the bullet hole in the living room’s diamond-pane window. “Italians don’t have nothing on gangster Jews!” he’d say, stroking the mezuzah that he’d left up on the doorway. “No hell in the Old Testament!”

Then he’d lead his guests outside, down the symmetrical rows of topiaries, and along the neat swirls of Madame Louis Lévêque roses until he could arrange the group in front of a bowing lawn jockey whose grinning black face had been tactfully painted over in a shiny pink. He’d gesture towards it, one eyebrow arched, as he told them that the man who designed this, this house destined to become the Wang family estate, had been Paul Williams, the first black architect in the city. The guy had built Frank Sinatra’s house, he’d built that ridiculous restaurant at LAX that looked like it came straight out of
The Jetsons
—stars and spaceships, and a castle for Charles Wang.

Martha Stewart had kvelled over this house. She’d called it a treasure and laid a pale, capable hand on the sleeve of Charles Wang’s navy summer-silk blazer with the burnished brass buttons, a blazer made by his tailor who kept a suite at the Peninsula Hong Kong and whose name was also Wang, though, thank god, no relation. Martha Stewart had clutched his jacket sleeve and looked at him with such sincerity in her eyes as she’d gushed, “It’s so
important,
Charles, so
essential,
that we keep the spirit of these houses whole.”

It was America, really, that had given him his three children, infinitely lovable even though they’d never learned to speak an unaccented word of Mandarin and lived under their own roofs, denying him even the bare dignity of being the head of a full house. His first wife had played some part in it, but
he
was the one who had journeyed to America and claimed her,
he
was the one who had fallen to his knees at the revelation of each pregnancy, the one who had crouched by the hospital bed urging on the birth of each perfect child who walked out into the world like a warrior.

Yes, America had loved him once. She’d given him the balls to turn his father’s grim little factory, a three-smokestack affair on the outskirts of Taipei that supplied urea to fertilizer manufacturers, into a cosmetics empire. Urea. His father dealt in piss! Not even real honest piss—artificial piss. Faux pee. A nitrogen-carrying ammonia substitute that could be made out of inert materials and given a public relations scrubbing and named carbamide, but that was really nothing more than the thing that made piss less terribly pissy.

The Haunter of the Threshold by Unknown
A Plain Jane Book One by Odette C. Bell
Under the Boardwalk by Barbara Cool Lee
One Night With the Billionaire: Book Three by Cassie Cross
A Glass of Blessings by Barbara Pym
Hitman's Secret Baby: A Bad Boy Romance by McKenzie Lewis
The Game of X: A Novel of Upmanship Espionage by Robert Sheckley
Fix You: Bash and Olivia, Book 2 of 3 (McDaniels Brothers) by Bell, Christine
The Hitwoman and the Neurotic Witness by Lynn, J. B.
你好，旧时光--三周年完美纪念版，套装全三册 by 八月长安
Our partner