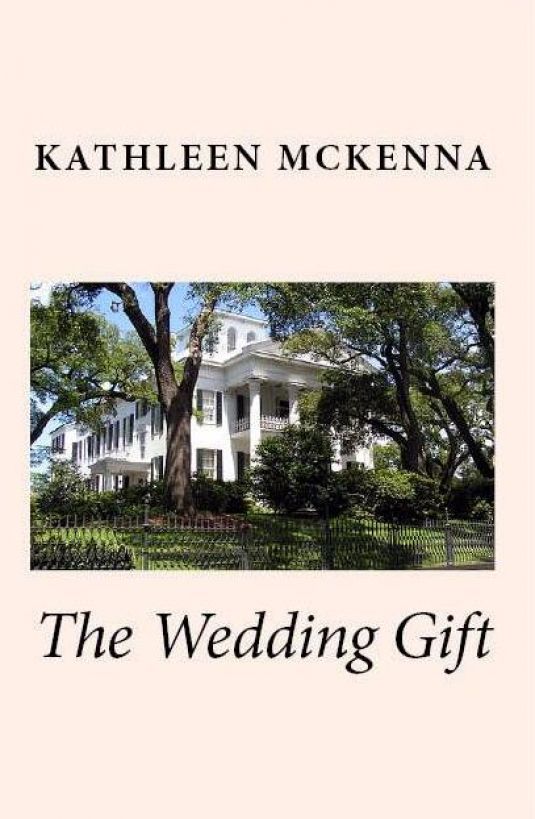 Thank you for downloading
this e-book. You are welcome to share it with your friends. This
book may be reproduced, copied and distributed for non-commercial
purposes, provided the book remains in its complete original
form.

All characters are
fictional, and any resemblance to anyone living or dead is
accidental.

To discover other books by
Kathleen McKenna, please go to
http://www.nightpublishing.com/id38.html.

Last evening, based on an
anonymous tip, authorities were called to the home of Roger Willets
in Dalton, Oklahoma.

Upon entering the mansion,
authorities discovered all seven members of the Roger Willets
family slain. The walls were covered in cryptic messages, possibly
written in the blood of the victims.
“It
was the most grisly overkill you could imagine,”
stated Deputy Riffler of the Dalton Sheriff'’s
office.

Deputy Riffler is a man not
easily rattled, having just returned to Dalton a decorated hero
from his second tour in Vietnam. However, it was obvious to this
writer that even this war hardened veteran was left shaken and
stunned by the carnage he had viewed. The police have no suspects
at this time, but state that they are following numerous
leads.

Authorities in the town of
Dalton, Oklahoma have released the following statement regarding
the recent slaying of the Roger Willets family:
“
New evidence has come to light showing
that the murders were committed by Robina Willets, wife of Roger,
age 35, and mother of Emily, age11, Dalton, age 10, Savannah, age
7, Ryder, age 5, and the infant George, age 4 months. Robina
Willets, age 29, after slaughtering her husband and children, then
took her own life. This is something we have never seen here in
Dalton, and do not expect to see in the next thousand years or so.
Roger Willets was a fine man and the largest employer here in these
parts. His wife was a gal from somewhere up north, and we don’t
know, and can never know, what made her do such a thing. Mrs.
Willets was a strange girl, and no one really knew her. We think
she might have become unhinged after her last baby, but it's no use
speculating any longer. The best thing to do is put this behind us
and let the town start to heal - most particularly the Willets
family, who has had a terrible shock and loss
,” stated Deputy Riffler of the Dalton Sheriff's
office.

The bodies will be released
for burial, as all autopsies have been completed. The burial is
planned for Saturday at 3 P.M. at Our Lady of Perpetual Sorrow in
Dalton. The remaining family members could not be reached for
comment.

Services are being held
Saturday, January 5th at Our Lady of Perpetual Sorrow in Dalton for
Roger Willets, age 35, his daughter Emily Willets, age 11, son
Dalton, age 10, daughter Savannah, age 7, son Ryder age 5, and son
George, age 4 months. Roger Willets was the owner/director of
Willets Petroleum Services, a fourth generation oil and drilling
operation founded in Dalton by George Willets in 1931. Roger is
survived by his brother George III and his sister-in-law Bethany.
The Willets family has asked that donations be made to the George
Willets Memorial Foundation in lieu of flowers.

Halloween high spirits take
a turn for danger in Dalton, OK. Dalton City, Oklahoma is a small,
bucolic town, located ninety-three miles east of Oklahoma City.
“
Nothing much happens in Dalton, and
that’s the way we like it,
” states Dalton
businesswoman, Orla Nashbone. But recently there have been a spate
of unexplained fires and two boys were injured at the former home
of Roger Willets. The Willets mansion is Dalton’s finest historical
property; it was built by George Willets in 1932 following his
takeover of the Chumley Brother’s oil claim, and the subsequent
start up of Willets Petroleum. The mansion is a stately white
colonial, boasting three stories and some fifty manicured acres.
The mansion, known locally as Willets House, has been empty since
the 1975 slaying of the Roger Willets family, and has become
something of a local target for children hunting for adventure.
Despite the posted warnings and high wrought iron fence around the
property, “
Kids will be kids, and they
dare each other to go on in and find a ghost
.” states Sheriff Riffler of the Dalton Sheriff's Department.
Two nights ago, such innocent mischief went badly when a passing
neighbor heard screams from the property and called the Sheriff's
office. “
I was walking Teddy, my keeshond,
by the Willets place, when all of a sudden I heard the most
horrible screaming, and then a crash. I was too afraid to look
myself but I ran right on home and called Sheriff Riffler. I hope I
never hear a sound like that again as long as I
live,
” stated local woman Darlene Riggits.
Upon arriving at the stately home, Sheriff Riffler and two deputies
found local residents Charlie Worthier and Donald Readle,
unconscious and badly injured at the bottom of the empty pool on
the property. “
The boys were up on the
third floor of the house. They had broken in and I suppose they
thought the fastest way out was climbing down the old oak on the
side, but the branches could not hold them and they both fell into
the pool. We’ll sure have some questions for them when they are
feeling better
,” stated Sheriff Riffler.
The Willets family has not responded to questions from this
reporter, but has issued the following statement through their
family attorney, Richard Channing of Dalton:

“
The Willets family is
distressed to hear of the injuries of these two young boys, but
states that they do not feel liable for said injuries as they
occurred during the commission of a crime - that of trespassing.
They send their prayers and thoughts to the families at this
difficult time
."

Services will be held on
Tuesday November 1st at John the Redeemer Baptist Church for
Charlie Worthier aged 14. Mr. Worthier was a lifetime resident of
Dalton City. He is survived by his parents Charlie and Elma
Worthier, his brother Randy, and sister Leeann. The family has
asked that in lieu of flowers, donations be made to the George
Willets Memorial Foundation.

Halloween Festival biggest
and best ever. Mayor Stoddard urges everyone to come on down
tonight to the Dalton City Fairgrounds for the forty-fifth annual
punkin' and pie dance celebrating Dalton's Halloween.
“
We will have music and food for everyone
and their uncle
.” This event is sponsored
by Willets Petroleum Services. Mrs. George Willets will be judging
the 45th annual costume contest, and states that this year’s prize
is a two night stay at the Oklahoma City Hilton, with a dinner for
two, so get your duds out folks, this one's going to be a barn
burner.

Mr. and Mrs. Charlie
Worthier of Dalton are proud to announce the engagement of their
daughter, Leeann, to George Willets, also of Dalton. The couple
will wed on June 15th of this year at Our Lady of Perpetual Sorrow
in Dalton, Oklahoma. They plan to honeymoon in Hawaii and then make
their permanent home right here in Dalton. Miss Worthier is a
graduate of Dalton High, and former Homecoming Queen as well as
Miss Corn Maiden for 2004. She enjoys riding horses and sewing
clothes. The groom to be is the only son of George and Bethany
Willets. George is a graduate of Dalton High and Oklahoma City
Junior College. He works in the family petroleum business and is
vice-president in charge of new development. Mrs. Willets, the
groom’s mother, chairs the Dalton Ladies Gardening Club; and is a
proud sponsor of the Dalton Cotillion and the Dalton Flower Show.
Mrs. Willets is also an active member of the Halloween dance
committee, and teaches Sunday school classes at Our Lady of
Perpetual Sorrow.In addition, she is the president and secretary of
the “Keep Dalton Pretty” committee, devoted to the historical
preservation of our town. Mrs. Willets will be hostessing a
luncheon at the Dalton City Country Club in honor of the bride on
Saturday May 15th. Mrs. Dalton states that she is
“
Thrilled to bits by the upcoming
nuptials, as I have never had a daughter, so had not believed I
would get to plan a wedding, but Leeann just begged me to take
over, so I am having the time of my life
."
Mrs. Willets will be wearing a cream chiffon suit at the luncheon
and a rose St. John ball gown at the upcoming wedding.

Well, if I didn’t want to
cry, I guess I would be laughing. I like that, don’t you? My
engagement announcement and I rated what … two lines? Meanwhile old
lady Willets had her whole boring life story told again and what
the hell? “
Leeann just begged me to take
over
.” Like hell I did.

I wanted no part of her
high-handed advice, and “
Oh Leeann, sugar,
if you would just let me do this, I think it will be so much
prettier, don’t you, Honey?
” Prettier my
high round ass! She meant better, nicer, not so low class, like
me.

Apparently every idea I had
was just not pretty. I had wanted to have my bridal shower at
Tully’s where I worked all last summer and where my best friend,
Jessie, is the hostess now.

I love Tully’s. They have
done the whole place up to look just like Hawaii, with a mural of
the ocean and leis hanging everywhere, and they got all these great
drinks, like “get lei’d” which is made from rum, pineapple and
coconut juice. When you drink it, it don’t taste like rum at all,
and if you drink three of ‘em in a row you get a plastic lei to
keep that says "I got lei’d at Tully’s".

But oh hell no, I was not
going to have me a party at Tully’s with my mama, and sister-in-law
throwing it, and my four best friends who had all been my
attendants when I was the Corn Princess. No, no, no, that wouldn’t
be pretty at all. What was pretty, I found out real quick, was a
luncheon at Miz Perfect Willets' perfect country club.I don’t like
that place one bit. That snooty old place wouldn’t even hire me
last summer, and I was already Homecoming Queen by then!

They said that they only
hired college girls - except that was a bold faced lie 'cause I
knew for a fact that the other two girls who was working there were
Missy Lane and Audrey Stepps, and they were most certainly not in
college. Both of ‘em were attending Dalton High, same as
me.

Of course their daddies
played golf there, and my daddy … well he had only used the
facilities there, so to speak, when he got pretty tight a few years
ago and went joyriding in one of their silly old golf carts. Daddy
drove it around the grounds for a while, just whooping and
hollering, and when he got bored a doing that, then he drove it
right on into the pool. He got out all dripping wet, and saluted
the golf club patrons by lowering his pants and showing them his
white ass.

Bullied by Patrick Connolly
The Hunter and the Trapped by Josephine Bell
Nine Lives: For the Love of Money by Empress Simone
Deadly Illusions (Hardy Brothers Security Book 3) by Hart, Lily Harper
All Hallows' Eve by Charles Williams
Doctor Who: War Games by Malcolm Hulke
Judith: Bride of Wyoming (American Mail-Order Bride 44) by Hildie McQueen
Vintage Ladybug Farm by Donna Ball
Into the Sea of Stars by William R. Forstchen
Fall to Pieces by Jami Alden
Our partner