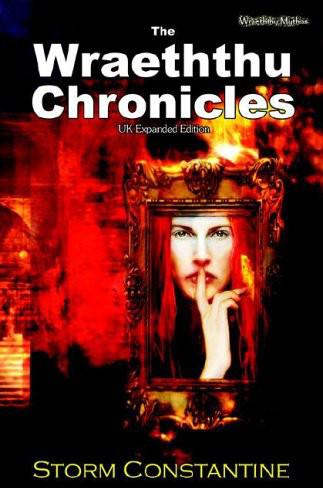 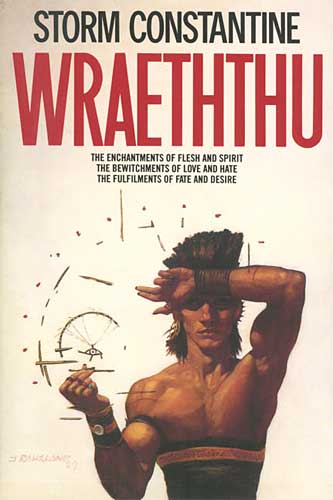 The Enchantments of Flesh and Spirit

The Bewitchments of Love and Hate

The Fulfilments of Fate and Desire

The History of the Twelve Tribes of Jaddayoth

The Twelve Tribes: A Traveler's Guide

The Enchantments of Flesh and Spirit

Today: a perfect day for thinking back. It must all be said, now, before time takes an axe to my memory. Outside, on the balcony the air begins to chill. The season changes. Curled leaves, brazen with death, scratch along the marble terrace and the clear, golden sunlight is rustling with ghosts. Remember: laughter; fear; delight; courage. I walked out to the balcony to write. It was difficult to begin. For some minutes I sat gazing at the distant mountains, smudged in a lilac haze. Someone has turned all the fountains off. Below me, the gardens are mostly silent.

They say to me: "What tales you could tell," and if I tell them; "again, more. There must be more." This may become a history book, but remember, it is only my history.

He faces northwest, the direction of the unknown

My name is Pellaz. I have no age. I have died and lived again. This is my testament.

At the age of fifteen, I lived in a dusty, scorched town at the edge of a desert. I was the son of a peasant, whose family for centuries had worked the cable crop for the Richards family. Our town was really just a farm, and to call it that lends it an undeserved glamor. Huts upon red dirt; there is little else to imagine. The cable crop, a hardy, stringy, tasteless vegetable, used for everything from bulk food to bed springs, straggled meanly over the parched ground. It did not grow high and its unattractive, pitted fruits burst with a sound like gunfire to release pale seeds in yellow jelly and fill the air with the odor of putrescence. The grand house of Sefton Richards, a stern, northern man, whose reclusiveness was supposed to shelter insanity, squatted against the horizon, far from our own humble dwellings. Every year, ten of us were summoned to the Great House and ordered to whitewash it. Through the windows, we could see that it had very little furniture inside.

We lived in a cruel, bitter, petty country and it was inevitable that we shared many of these characteristics. Only when I escaped did I learn to dislike it. Then, I existed in a mindless, innocent way, ignorant of the world outside our narrow territories and content to stretch and pound the cable fiber with the rest of my kind. I don't suppose I ever did really think about things. The closest I came to this was a dim appreciation of the setting sun dyeing all the world purple and rose, lending the land an ephemeral beauty. Even the eye of a true artist would have had difficulty in finding beauty in that place, but the sunsets were pleasantly deceptive.

We first heard of what were timidly termed "the upsets" by travelers passing hurriedly through our lands. Nobody liked to stay long in this part of the country, but my family were an affable, hospitable crowd; and their hospitality was difficult to evade. They loved visitors and entertained them lavishly, and it would have taken a hard brute indeed to resist their advances. The trouble had started in the north, some years ago. Nobody was exactly sure when it had begun. Different travelers opined different reasons for its cause. Some favored the specter of unemployment and its attendant poverty; others waved the flag of continuing moral decline; others claimed power plants were responsible by insinuating noxious fumes into the air that warped the mind. "The world we know is disappearing," they ranted. "Not the final, sudden death we all envisaged, but a slow sinking to nothing."

Squatting in the dirt, I felt none of this would ever touch me. I listened to their tales with the same ghoulish pleasure as I listened to my grand-mother's tales of werewolves in the desert.

It was said it had started as small groups of youths. Something had happened to them. Perhaps it was just one group. Perhaps, once, on a street corner of a damp, dimly-lit city suburb, an essence strange and huge had reached out from somewhere and touched them, that first group. A catalyst to touch their boredom and their bitterness transforming it to a breathing, half-visible sentience. Oh yes, they changed. They became something like the werewolves my grandmother remembered tales of. Spurning the society that had bred them, rebelling totally, haunting the towns with their gaunt and drug-poisoned bodies; all night-time streets became places of fear. They dressed in strange uniforms to signify their groups, spitting obscenities upon the sacred cows of men, living rough in all the shunned places. The final act of outrage became their fornication amongst themselves amid the debris they had created. The name that they took for themselves was Wraeththu. To distraught mothers and splintered communities, this spelt three things: death, rape and darkness. The Wraeththu hated mankind. They were different; on the inside and on the outside. Hungry, baleful fire smouldered in their skins, you could see it looking out at you. They drank blood and burned the sanctity, the security of society, infecting others like a plague. Some even died, it is said, at their touch. But those who survived and joined them were strong and proud. Werewolves really would walk the desert again.

Listening to all this no invisible wind prickled my skin. I never shivered and looked nervously out at the vast stillness of the desert, wondering. One man who came to us warned my father he should chain his sons to the hut at night. We all just laughed. Nettled, the man pointed out that others, families in villages farther north, did just that. No, no-one had actually been taken, but it was only a matter of time. I looked at my brother, Terez, and we rolled our eyes and giggled. The man turned on us swiftly. Death looked Mankind in the face, he cried, and we were too stupid to save ourselves. Would I laugh as the Wraeththu corrupted my body and destroyed my mind? Would I laugh as I watched my mother and sisters slaughtered? I turned away from him, stung by humiliation for a moment. No, not even then did I stop and feel Fate's breath on our necks. I took out my sharp knife, a cruel little thorn, and declared this was what any of these weird types would get from me, if by some mischance they should wander so far south, and I stabbed the air explicitly. My father smiled. He patted my arm but his eyes were troubled.

After our visitor had gone, my sister Mima asked our father what he thought of these tales. He told her he believed them to be wildly exaggerated. Rumors such as these have been circulating for many years: "Wraeththu they say! If the world sinks, it is not because of them!" Mima and I must have looked unconvinced, so my father smiled. "We are far from the northern cities here," he said, his voice gentle with logic. "A gang of unruly, discontented boys has grown into a pack of demons somewhere between the minds and tongues of travelers. They think us fools, easily fooled. No, the Wraeththu are the payment we receive for food and lodging. People on the road have little money, but they have plenty of imagination, that is all. We have nothing to fear. It is all too far from us."

Mima and I walked in the cable fields that evening. Everything was beautifully red and purple, Mima a stunning ravenhaired wraith in the half-light. We talked again of the Wraeththu.

"And I fell under their terrible spell?" I butted in with a laugh.

Mima did not laugh. "You are not quite a man, Pell. You act so young sometimes. I know you would be vulnerable."

I felt I ought to be annoyed with her. "Mima! 1 am nearly sixteen years old. I'm really not such a baby. Anyway, they will never come here."

"How do you know? You can't be sure." She squatted down among the cable stalks, her beautiful dark eyes almost wet with tears. Sometimes, she made me ache to look at her, yet I never really noticed girls. I was very backward in that respect.

"Mima, you're over-imaginative," I told her.

"I wish you'd believe me," she said, under her breath. But that was an end to the subject for quite a while.

The season had changed, and it was a gloomy day when Cal first came to our home. I was sitting in the doorway, sharpening my mother's knives. The silvery, grating noise I made suited well the warm, clammy air. Nothing could take the metallic taste from my mouth. The skies were overcast, the ground damp and steaming, insects sheltered miserably under the eaves of the hut. He rode in alone on a fine-looking pony. Later I learned it was stolen. I watched him come slowly down the muddy road toward me; past the other huts where other families looked out, past the lithe figure of Mima who was hurrying home through the stream. She stopped and looked at him, inquiry written all over her, but he never looked, just came straight on down to me. He wore a rust-colored poncho, that covered his knees and most of the pony's back. Suddenly a knife-like depression entered me. The world seemed to change before my eyes. All the huts looked empty and sad, the dampness stung like acid. I think I knew then, in that brief instant, that my destiny had been set. Already the land around me had acknowledged my farewell. Then it had gone, that lightening realization, and I looked up at the rider who had halted in front of me. As he leaned down from the saddle, I noticed he was deeply tanned, with wild, yellow hair flattened by the humid air, and blue, almost purple, eyes. He leaned down and held out his hand to me. I took it.

"I am Cal," he said and then I knew what he was. I could not hide my fear, my eyes were as wide as a kitten's.

"I'm Pellaz," I told him and added rather fatuously, "Are you a traveler?" His mirthless smile told me I did not fool him.

"Of sorts. I've been traveling across country for about a week, I think. Time's gone crazy. I have no money . . ."

This was familiar ground. At once I offered him the hospitality of our home.

Juanita la Larga by Juan Valera
BRAINRUSH 02 - The Enemy of My Enemy by Bard, Richard
Ana Seymour by Jeb Hunters Bride
Raging Passions by Amanda Sidhe
Frost Like Night by Sara Raasch
Medium in Paradise: A Humorous Paradise Romance by Moray, Tabby
Zoe in Wonderland by Brenda Woods
The Demon Catchers of Milan #2: The Halcyon Bird by Kat Beyer
The Ape's Wife and Other Stories by Kiernan, Caitlín R.
Leaving Las Vegas (Entangled Ignite) by Barley, Aleah
Our partner