Read The Years After Online 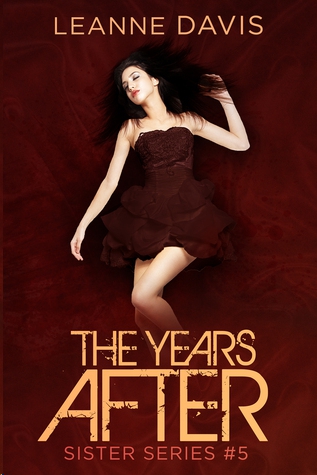 Other Titles by Leanne Davis

This is a work of fiction. Names, characters, places, and incidents are either the product of the author’s imagination or are used fictitiously, and any resemblance to actual events, locales, or persons, living or dead, is entirely coincidental.

All rights reserved. No part of this book may be used or reproduced in any manner whatsoever without written permission of the author except in the case of brief quotations embodied in critical articles or reviews.

Edited by Teri at The Editing Fairy ([email protected])

Acknowledgement: To Teri (editingfairy.com) for all your wonderful work with my novels, time after time.

Other Titles by Leanne Davis

FOR DEREK SALAZAR THERE was a defining line that separated the
before
, and the
after
of his life. There was one day that marked what his life would become and who he was to be. Unlike most people he knew down to the minute of the day the entire course of his life would be set upon. He remembered the day always, no matter what was happening or what he was doing. It was the day he killed his father. And after it
she
completely changed. She started needing her medicine and he had to start getting it for her. And it was the last time he’d heard Max speak with any kind of regularity.

Still knowing what caused all the
after
didn’t make living it any easier.

Derek heard the thumping. He heard the voices. He heard the scream. He heard the loud cursing. He heard the silence. He huddled closer to the wall, tucking himself between the door and the wall. If anyone entered maybe they’d forget to look behind the door. He nearly sat on his little brother, Max trying to keep him from making noise. But Max kept struggling. Luckily, his brother didn’t talk. Ever. He was mute. A freak. A shadow. Max had not said a word since that day that Derek had heard. And if he hadn’t heard him, then who could have?

No one had ever bothered to find out why he didn’t talk.
She
just ridiculed him. Called him names. Hit him out of frustration for him to just talk. Answer her. Say something. But Max merely remained silent. His big dark eyes never betraying what he thought or felt about her words. Her anger. Her violence. Derek was getting big enough he could finally step in and stop
her
from hitting him.

The room went silent. His breath started up again. His heart finally slowed down. He slowly stood to his thirteen year old feet. He stretched his legs and shook his numb feet. Max had fallen asleep. His eight year old body completely huddled in a knot. At least he was quiet now. He had learned years ago, when he was only a toddler to be quiet. To be unheard. As shadow-like as Max lived his entire life. When he made noise, then one of them might try to figure out what that noise was, and that was when Derek got
hurt
. He didn’t want to get
hurt
again. Never again. And he made sure Max didn’t know what
hurt
was. Not really, anyway. What she did, wasn’t really hurt. It was just kind of stinging. Derek opened the door. Years of practice he could do it without even a movement of air. The trick was to go slow. Really, really slow. He was good at disappearing anywhere. Luckily he was small and lithe and could tie his body up like a contortionist. He was ignored and easily looked over.

He stepped to the hall. He took the three steps to the opening of the living room. He stayed against the wall in case he was wrong and they were still there. But no. No they weren’t. He scanned the room thoroughly, sure now it was just his mother. He rushed to her and dropped to his knees. He felt her neck. There was a faint pulse. He leaned closer.

“Mom?” he asked softly. She didn’t stir. He leaned over her and grabbed the needle she’d dropped to the floor. Her arm was riddled with holes and scars like she’d been attacked with a pencil or something. He knew better. It was her medicine.

She used to tell him it was her medicine and she needed it to survive. He’d believed her. Just as Max still did. Until he got smart. Until he figured out why the men came here. And why they never had any money.

He stood up and walked the needle to the garbage. It was overflowing. He tucked it deep inside the can so Max wouldn’t get into it. He stood over his mother then. He brought a blanket to cover her naked body. She lay prone on her side, her black hair twisted around her dark, tanned skin. Drool fell in a line from her mouth. Other than the drool she looked like a corpse. Like what Derek had seen on those crime shows. Anyway it was kind of freaky to have your mother look dead on the floor so he covered her.

He went down the hall, through three flights of graffiti stairs, all with dust and hair swirling in the corner after he past. He entered the commons and crossed the square to where Quentrell lived. Or worked. He didn’t really know. He just knew what was expected of him. So far, he’d kept his head down, his mouth shut, and out of trouble. He got mom’s medicine in exchange for a few errands Quentrell wanted done.

He knew the streets of Marsale like a rat knows the sewer. He knew where to go at any moment, without anyone, cops or criminal alike knowing where he was. He had started young, Max’s age. Because mom and volunteered him in a desperate need of her medicine one day. And so he started working.

His only goal now, was that Max would not start working.

To do that he had to be the best worker ever so Quentrell respected him enough to respect his wishes to leave Max alone.

He knocked on the door and Quentrell’s guy opened the door. Recognizing Derek he let him enter with a lift of his hand in a complicated handshake. Derek did it. But he never for a second forget they were not his friends. No one was. And he would only survive to remember that. He would never have friends.

DEREK SALAZAR SLAPPED THE packet of pills in the young kids hand as he palmed the cash. He flashed a half smile to the nerdy looking kid, no more than sixteen who had pitted out his shirt in sweat. Poor kid looked like he was going to pass out. Smirking, Derek pocketed the cash and started to turn and head out of the park when a scream brought his head up and his hands out.

A girl on a pedal bike swerved around him and crashed into the tree he’d just stepped out from. The front wheel hit and the bike wobbled before it toppled over with the girl half on it. She landed awkwardly on the park grass with her things spreading around her. Her legs were half bent, and she was leaning on her elbow, as long, dark hair fell all around her, obscuring her face.

Her things included a music case of some kind. Most likely she had just started as a freshman at Peterson College for the Arts, the local prestigious private college that drew gifted artists and musicians from across the country and particularly the west coast. She had long black hair. It fell to her mid-back in a midnight curtain. It was straight as a ruler.

She was probably eighteen or nineteen. But the bike and matching bike helmet kind of made her seem like strawberry shortcake dressed up to play at the park. Kids’ voices could be heard behind him on the swing sets and play structures. He looked around. His deal had gone down without a hitch. No one else was looking their way. Just this mess before him.

She groaned slightly and unstrapped the bike helmet to yank it off, as she then pushed a hand at her hair, flipping it back off her face. He stepped back when her face lifted towards him. It was stunning. Perfect. A photo-shopped Madonna-like painting, but in the flesh. Porcelain-white skin that set off the palest, biggest most strange blue eyes he’d ever witnessed in person. They were intense, slightly tilted at the ends. Delicate black eyebrows framed her eyes, and big, red lips added a snow-white affect to her looks. She didn’t wear a stitch of make-up.

He dropped down to squat on his feet. “Are you all right?”

“No. The tree. You gave the tree a pretty good scare,” he said with a smile. He didn’t often feel the need to smile at strangers. But one this beautiful? Why not?

She glanced at the tree trunk as a deep blush covered her neck and cheeks. Thick, straight bangs framed her face. She turned fully towards him. She smiled with a soft, shy lift of her lips. They were big, red, puffy lips. Perfect for kissing. Or sucking. He thought either would be perfect. But instead he put a hand out towards her.

She lifted a thin, elegant hand and set it in his. Her fingers were long with the tips short and tinged in white. He tugged on his arm and she rose up with him, wiping at her pants. She was eye to eye with him. Not a great feat as he was way too short for a guy. He only measured in at five foot five. He’d suffered all the jokes his entire childhood. The thing was: all his short statue did for him was make it way easier to go unnoticed, a distinct advantage in his line of work. He’d never had the time to worry about being short. He was too busy making sure he didn’t get shot or thrown in jail. So not being noticeable? A great thing.

But this girl in her navy blue sneakers stared right into his eyes. She was skinny, bony actually. Her dude-like clothes hung off her. She had on baggy to her jeans and a sloppy sweatshirt. It was navy blue colored and without even an interesting logo on it. Her hair was mostly thrown back in a pony tail that was thick and long, but half it fell forward. Most girls would be smoothing their hair in their embarrassment over nearly running him over and hitting a tree. Not this one. She shook her head and put her hand out.

Shake hands? He tried to keep the odd look to himself. She was kind of different, he’d give her that. “Uh, I’m Derek.”