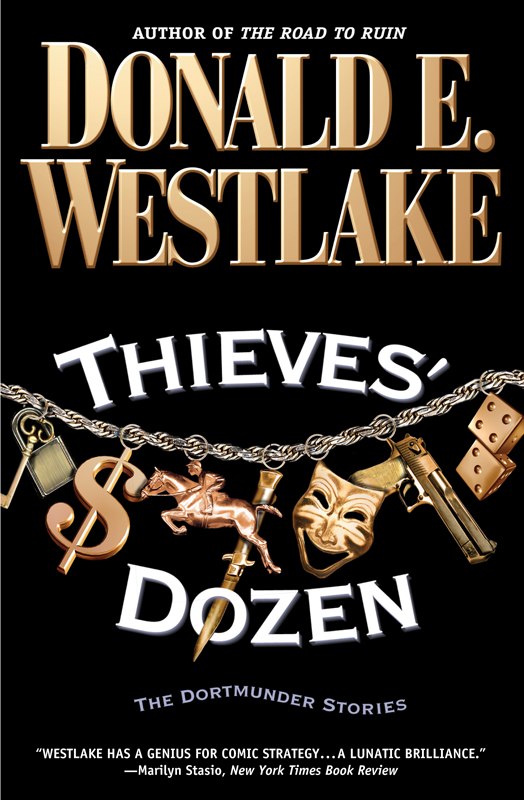 The Mysterious Press name and logo are registered trademarks of Warner Books.

So Many Heists, So Little Time

Dortmunder and Me, in Short

Give Till It Hurts

SO MANY HEISTS, SO LITTLE TIME . . .
THIEVES’ DOZEN

Horse Laugh:
Dortmunder always avoids thefts that involve four-legged creatures. Then why is he somewhere out in New Jersey, listening to sirens wailing in the distance, holding on for dear life to a runaway racehorse’s rear end?

Too Many Crooks:
Dortmunder plans for everything. But when he started digging a tunnel under a bank, the one thing he didn’t think of was coming out a hero . . .

Party Animal:
Desperate? On the run? Chased by the police with a handful of loot? For every emergency, Dortmunder has an answer. This time it’s slipping into a party and helping a comely caterer serve anchovy logs— until the cops come in . . .

Now What?:
There’s a guy riding the New York subway with a ham sandwich in a paper bag. The guy’s name is Dortmunder and the sandwich has a $300,000 brooch inside. It all started at a celebrity wedding party in Manhattan . . .

Art and Craft:
Nothing good had ever come from dealing with a crook named Three Finger Gillie. Now that Gillie has turned into a downtown artist, it’s even worse. He wants Dortmunder to steal his own paintings—and Dortmunder just knows that something’s wrong . . .

Money for Nothing • Put a Lid on It • The Hook • The Ax Humans • Sacred Monster • A Likely Story • Kahawa Brothers Keepers • I Gave at the Office • Adios, Scheherazade Up Your Banners

Smoke • Baby, Would I Lie? • Trust Me on This • High Adventure Castle in the Air • Enough • Dancing Aztecs • Two Much
Help
I Am Being Held Prisoner • Cops and Robbers Somebody Owes Me Money • Who Stole Sassi Manoon? God Save the Mark • The Spy in the Ointment • The Busy Body The Fugitive Pigeon

Under an English Heaven

Once Against the Law (coedited with William Tenn)

PRAISE FOR DONALD E. WESTLAKE AND THE DORTMUNDER NOVELS

“Is any mystery writer more adept at turning murder into mirth or conjuring up more hilarious hokum than Westlake in his Dortmunder series? I doubt it.”

“Westlake is a versatile thriller master.”

“Westlake is equally at home with comedy ranging from slapstick to satire, and with melodrama that runs the gamut from chiller to thriller.”

“Westlake has a special genius.”

W
HEN
J
OHN
D
ORTMUNDER AND
I
FIRST TEAMED UP, IN
1967, neither of us had any idea what we were letting ourselves in for. In fact, at first, it didn’t look as though the partnership would get off the ground.

It all began when my regular guy stood me up. I have been, intermittently, a writer known as Richard Stark, who chronicles the incidents in the life of a character called only Parker. In 1967, Parker refused the role I’d planned for him in what was supposed to have been his next book; he thought it was beneath his dignity. So that’s when I first turned, just as a substitute, a temp, a one-time hire, to John Archibald Dortmunder. And all I asked him to do was steal the same emerald six times—piece of cake.

John was willing at first, but after three heists he turned surly and wouldn’t play any more, so I put that failed project away and turned to something else, thinking Dortmunder and I were merely a blind date that hadn’t panned out. Then, two years later, I came across the partial manuscript in a closet, found Dortmunder in a more accommodating frame of mind now that he’d spent two years in the dark, and together we finished the book. It was called
The Hot Rock
, and it was published in 1970.

After
The Hot Rock
and its ensuing movie, in which I was astonished to learn that Dortmunder was Robert Redford, I thought we were quit of each other. I’m sure neither of us ever expected to cross paths again, or to collaborate on what has become as of this writing a total of eleven novels, and we
certainly
never expected to find ourselves mixed up with short stories.

I’m not quite sure how that latter development came about. Ten years had gone by since I’d finished that first Dortmunder novel, with three more added along the way, when into my head came fragments of an elusive conversation between “an elegant man” and John. It didn’t seem to be part of a novel, but then, what was it?

Ask a silly question. No, I mean “Ask a Silly Question,” the first John Dortmunder short story, containing the elegant man and his class-ridden attitudes, which
Playboy
published in February 1981. Unlike in the novels, Dortmunder worked single-o in the short story, except for a phone-in from his friend Andy Kelp.

Anyway, it looked to me like a one-off. I wasn’t writing short stories that decade, or at least hardly ever, and Dortmunder was clearly more comfortable in a setting where he could have his gang around him. So that was it.

Except. Except it kept happening, one way and another. For instance, I was thinking one day about things John might purloin, and I thought of a horse, and I got a picture in my mind of John Dortmunder and a horse gazing deep into each other’s eyes, and I loved it. But I couldn’t do it. I haven’t met enough horses to be able to write an entire novel about a horse. But, come to think of it, I could write a short story. And did.

More time went by, and then, as occasionally happens (my one link to Joan of Arc), another fragment of conversation wafted through my brain one day in 1988—“What’s that noise?” “Maybe it’s the wind.” “What wind? We’re in a tunnel.”—and that became “Too Many Crooks,” mainly because I wanted to know what those two were doing in a tunnel.

A year later, I myself had occasion to wonder what I was doing in Italy, where, in fact, I was on vacation. The trouble is, I don’t know
how
to go on vacation. From what? I don’t have a job, I don’t have a boss, and if I have a schedule, it’s self-imposed and mostly ignored. So there we were, my wife Abby and I, in a rented house in Tuscany for the month of August, and I didn’t quite know what to do with myself.

When at a loss, write. The only writing materials around were pen and paper—pen and postcard to begin with, but we upgraded—and so I wound up doing, in longhand, “A Midsummer Daydream,” in which John Dortmunder finds himself at loose ends outside New York City, not knowing what to do in this strange locale. I typed it when I got home, since my handwriting looks like a ball of string a kitten has played with, and
Playboy
took that one, too, like the others.

Then there came an anomaly. The Sunday edition of the
New York Times
doesn’t weigh enough all by itself to satisfy its editors, so they add special sections now and again, and sometimes this special section is a Health supplement to the
Magazine
. An editor from there phoned me, one day in 1989, wondering if John Dortmunder had any thoughts about health, and I had to admit I didn’t know but I’d ask. I did, and when “The Dortmunder Workout” was published, in the Health supplement to the
New York Times Magazine
, in the spring of 1990, John was the only guy in the issue without a sweatband around his brow. The editor told me afterward that the staffers who already knew Dortmunder thought it was a nice piece, but those who hadn’t previously met my boy were baffled. Well, that seems fair.

After “The Dortmunder Workout” and its preceding four short stories during the ’80s, I expected the two of us would
really
be content from now on to stay forever in the land of long-form, but no. A thought came to me, in the early ’90s, that a person being chased, wanting to hide, coming across a party, might hide in that milieu not by pretending to be a partygoer— won’t the other partygoers realize they don’t know him?—but by becoming a member of the caterer’s crew, moving among the revelers with little trays of finger food. The other waiters, being temps themselves, won’t be surprised to see an unfamiliar face within their group, so maybe the pursued person could blend into this party tapestry until the baying of hounds has receded into the distance. For John and me, it seemed worth the try.

“Party Animal,” for thus it came to be called, did not begin life as a Christmas story, but merely as a party story. However,
Playboy
had a hole in its holiday issue that year, and what better thing do these people have to celebrate than Christmas? So there we have it.

But then, just to complicate things, the next story John and I embarked on was supposed from the very beginning to be about Christmas. I, who can go years without writing a word about Christmas, and John Dortmunder, who dislikes all holidays indiscriminately because everybody’s home, combined to make two Christmas stories in a row.

What happened, I got a call from Otto Penzler, founder of Mysterious Press and owner-operator of the Mysterious Bookshop in Manhattan. He explained that his store had a large mail-order business, that the Christmas season was a potent part of that business, and that he’d thought it would be a nice thing to give his regular customers a bonus, a Christmas present of a short story just for them, once every year, each time out with a different writer they might have heard of. Would I like to write the first one?

I consulted with John, and it turned out he’d always wanted to attend the occasional poker game in which Otto and I and a few others are regulars (it’s the game itself, sans scheduled time slot or location, that’s irregular), and which is sometimes played in the library behind Otto’s shop. So John dropped in, played the hand he was dealt, and “Give Till It Hurts” was the result.

Until this point, all these briefer travails had involved John either by himself or in company with Andy Kelp, but no one else from his extended unfamily had ever shown up. But there was one particular character who’d appeared in a few of the novels— a fence with a heart of tin, a sourpuss named Arnie Albright— and in thinking about him one day I saw a little something
he
could do that didn’t lend itself to novel treatment, but which could certainly be the basis for a short story.

It was, but it wasn’t right for
Playboy
. I thought, however, it might be right for
The Armchair Detective
, a very good magazine devoted to the mystery genre, and to my delight they thought so, too, so that’s where “Jumble Sale” was published.

The Reconstruction of Carla Millhouse by Candy Caine
The Bride Tamer by Ann Major
The Duke In His Castle by Vera Nazarian
Unwrapping Holly: by Lisa Renee Jones
Under the Lights by Mari Carr
The Terra-Cotta Dog by Andrea Camilleri
Hat Trick! by Brett Lee
The Company of Darkness by Lisa Olsen
Stormy Night by Jade Stratton
Lipstick 'n Lead by Petrova, Em
Our partner