Read This Way Out Online 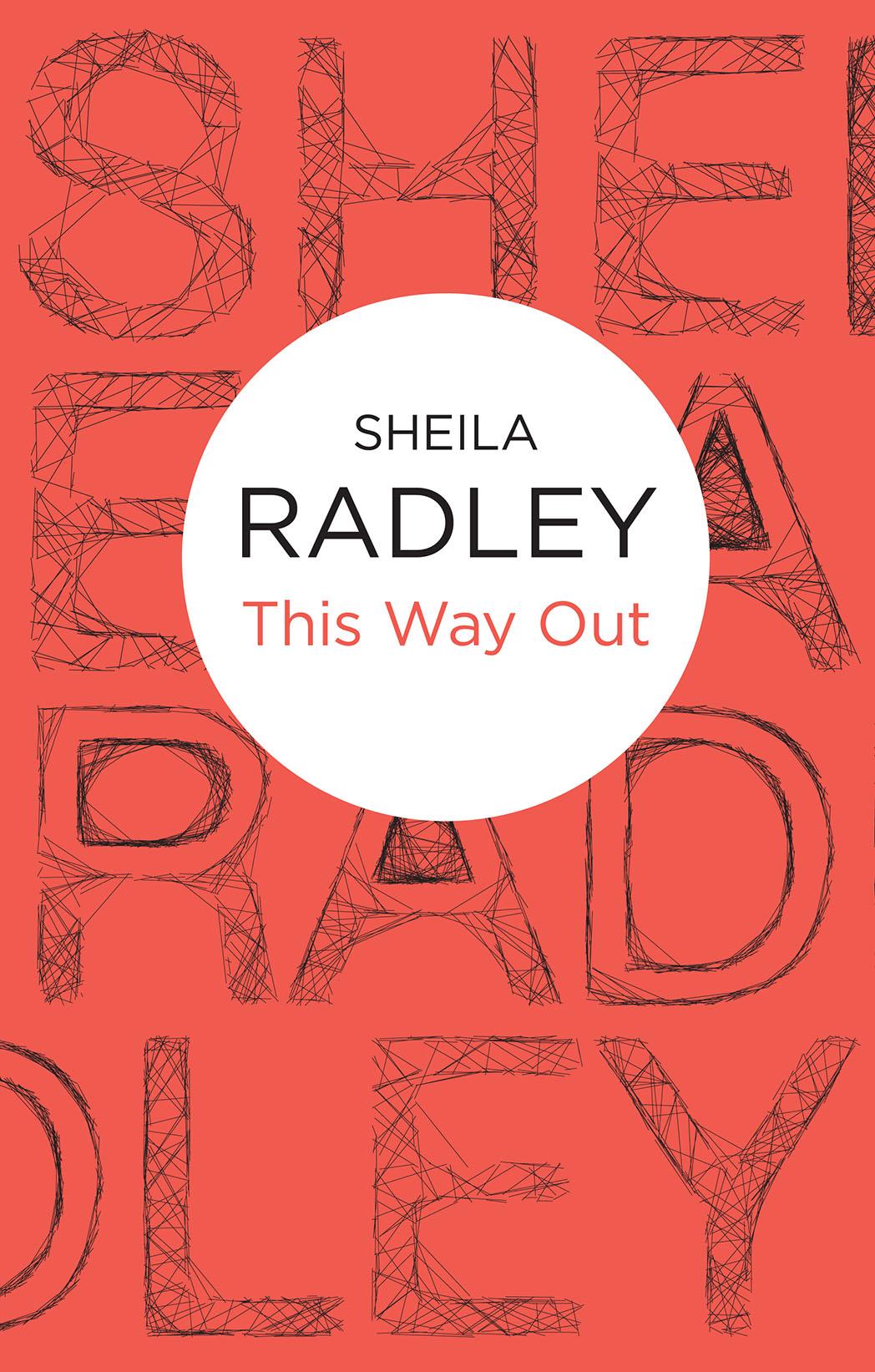 Contents
Sheila Radley
This Way Out

Sheila Radley was born and brought up in rural Northamptonshire, one of the fortunate means-tested generation whose further education was free. She went from her village school via high school to London University, where she read history.

She served for nine years as an education officer in the Women's Royal Air Force, then worked variously as a teacher, a clerk in a shoe factory, a civil servant and in advertising. In the 1960s she opted out of conventional work and joined her partner in running a Norfolk village store and post office, where she began writing fiction in her spare time. Her first books, written as Hester Rowan, were three romantic novels; she then took to crime, and wrote ten crime novels as Sheila Radley.

Derek Cartwright had always considered himself to be a decent, honourable man. The thought of doing away with his mother-in-law would never have entered his head, if he had not begun to suffer from bad dreams.

What shamed him most, as he recollected what was to prove only the first of several similar nightmares, was that he had no personal reason for wanting to strangle Christine's mother. Far from hating Enid Long, he rather liked her. It certainly wasn't some festering antagonism that had opened the window on his unconscious, bringing him out of his sleep in a cold sweat to stare with horror in the dark at his rigidly trembling imagined-murderer's hands.

Derek and his mother-in-law had always got on perfectly well together. There was no friction between them, open or concealed. She didn't even irritate him much. He bore no grudge against her, wished for no revenge, had no sordid financial motive for wanting her dead. As he flopped back on his pillow, panting after waking from his third dream-struggle to squeeze the breath out of her, he forced himself at last to analyse their relationship. The conclusion he arrived at, with guilt and further shame, was that he longed to get rid of his mother-in-law simply because she was
there
.

Enid Long was there, living at the Brickyard, the Cartwrights' comfortable Edwardian house in the Suffolk village of Wyveling, entirely by accident.

Until she wrote off her little Fiat by failing to take the 90 degree bend at Wolsey Bridge on the Southwold to Blythburgh road â no other vehicle was involved, but it was a warm summer afternoon and she admitted to a lunch-time gin and tonic and a possible subsequent lapse in concentration â she had been a vigorous and independent widow. Miraculously, considering that the car had landed on its roof in the grazing marshes, her injuries were relatively minor. But she had lain in the wreckage for over an hour before a passing lorry driver saw and rescued her, and she was badly shaken. The accident damaged her body rather less than her confidence.

It was Derek who had suggested to Christine that they ought to ask her mother to come to Wyveling to recuperate after she left hospital, instead of returning immediately to her Southwold flat. He did so primarily in his wife's interests, wanting to save Christine from an indefinite continuation of the long round trips she was making each day to visit her mother. To that extent, he acknowledged, he had only himself to blame for the fact that Enid was still there nearly a year later. But he had never for a moment imagined that Enid would
want
to live with them permanently.

Enid Long was not a sentimental woman. Her relationship with her only daughter had always been one of distant affection. She and her husband Percy (the junior partner in both marriage and business) had owned the guest house â the Glenalmond private hotel â on the North Parade at Southwold where Derek had stayed with his parents for a decade of summers when he was a boy. When he returned, alone, in his late teens for the specific purpose of seeing Christine, Enid had encouraged their friendship and had put no obstacles in the way of their eventual early marriage. And although the couple had never lived more than an hour and a half's drive from Southwold, Enid had made it clear from the start that she was too busy with her own affairs to take more than a detached (though generous) interest in theirs.

Even after Enid was widowed (Percy having departed with a minimum of inconvenience to her, as a junior partner should) she had continued to live her own life. She kept the Glenalmond until she was in her late sixties, then sold it and bought a flat. There she spent each summer, involving herself busily in the life of Southwold; and each winter she took herself off for three or four months to an apartment she had bought as an investment in Majorca, where between summer lets she could warm her own bones in the Mediterranean sun.

The only time she had ever previously stayed with Christine and Derek was in the November before her accident. She had taken them by surprise by inviting herself to Wyveling, at short notice, a few weeks after Laurie's death.

Laurie, the Cartwrights'fourth child, loving and very much loved, was handicapped by Down's syndrome. A happy, boisterously affectionate girl who needed almost constant supervision, she had died suddenly at the age of fifteen from an undiagnosed heart defect, leaving her familyâher mother in particularâbereft.

While Laurie was alive, Christine had spent much of her time ferrying her daughter to and from a special day school for the mentally handicapped, thirty miles away in Yarchester. Laurie's death had deprived Christine not only of her youngest child but of occupation and purpose.

Derek, at forty-three the regional marketing manager for a highly rated mutual life assurance society, was out on the road a great deal. Their older children, Tim and Richard and Lyn, were all working or studying away from home. With no one now but the dog for company at the Brickyard, the property they had bought because it was ideal for a large family, Christine had begun to slip into the downward spiral of reactive depression.

Enid's telephone call announcing that she intended to stay with them for a few days had come as a great relief to Derek. Worried about his wife, and coping as best he could with his own grief, he had seen his mother-in-law's impending visit as a sure way of taking Christine's mind off her sorrow. The following day, a cold, dark-clouded Saturday morning in November, he had hurried out with enthusiasm when he saw the Fiat negotiating the open gateway that led from the village street to his long gravelled front yard.

âIt's very good of you to offer to come, Enid,' he had said as he lifted her suitcase from the boot of her car. The lowest of the dark clouds had just begun to spit out a shower of hail, and they lingered under the car port â formerly a cart shed, set just inside the gateway and at a right-angle to it â until the precipitation stopped.

âIt's not “good of me” at all,' his mother-in-law had retorted briskly. âSheer self-interest, Derek, I can assure you. I want to get away to Majorca, but I can't enjoy my holiday if I know that Christine's moping about here on her own all day. She can't go on grieving for ever. She needs to find herself a job, and as soon as possible.'

Enid Long was then seventy-five, but she looked ten years younger. Her dark eyes were clear, her cheeks healthily firm. The only indication of her true age was her drooping throat, and she always wore a smartly tied chiffon or silk scarf to retain it.

She was a little overweight, but she had style. Her lower legs were the elegant shape of inverted champagne bottles, her silver hair was bouffant, her discreet make-up was expertly applied. She was accustomed to buy expensive clothes, which she chose in becoming colour combinations of moss-green, cyclamen, grey and violet. Derek had always admired the care his mother-in-law took over her appearance, confident that Christine, who had inherited her mother's dress sense as well as her good features and slim ankles (though fortunately not her bottle calves) would when the time came progress just as smoothly to an ageless old age.

âI could tell from her voice on the telephone,' Enid went on, âthat Christine's making no effort at all to pull herself together. She needs something to galvanize her â and there'll be nothing like having
me
under her feet all day to do that!'

And Derek had laughed, almost for the first time since Laurie's death. His mother-in-law's attitude, as sharply invigorating as the shower of hail, was doing him a power of good already.

âAs soon as I've got Christine going again,' Enid had continued vigorously, âI shall be off. You won't want me hanging about here, especially now you've got your freedom. Because let's face it, Derekâhowever much you loved Laurie, she was an encumbrance.'

That had stung him, and he answered her with a rare anger: âShe most certainly was not! We
never
thought of her as that.'

âNever?' Enid's eyes were shrewd â a good deal harder than Christine's â but her voice was not unsympathetic.

âYou wouldn't be human if you hadn't thought it sometimes, Derek,' she had said. âIf Laurie had been a child of mine, she would have had to go into residential care â but then, I had the Glenalmond to run. Christine's like her father, soft-hearted; but I've always respected you for supporting her. You did what you both thought right, and Laurie turned out to be a lovable girl in spite of everything.