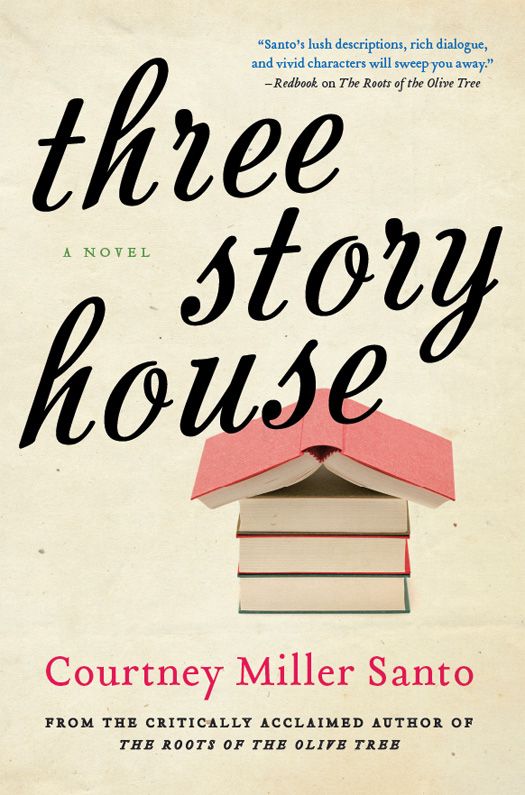 For my twenty-nine cousins who somehow manage
to be the least alike and most alike of any group of people I know.
Thank you for teaching me that chaos can be beautiful
and that it isn’t a holiday unless two dozen people show up
and eat every last scoop of mashed potatoes.

A
s the only child of an only child, Lizzie Linwood had never given much thought to cousins. Before her first summer in Massachusetts, cousins had been an abstraction, like Turkish Delight, which, after having read about it earlier that year, she’d decided must be the sort of candy that the children of royals ate. From the backseat, she grabbed a few grapes out of the container her mother had wedged between the two front seats. According to her mother’s new husband, she now had dozens of first cousins and too many second cousins to count. She looked at Jim, who’d driven the overnight leg of the trip and was sleeping with his head on the window glass and his knees wedged against the dashboard. At rest he looked different, less pinched around the eyes and mouth.

“Not too many,” her mother said. “Jim’s family is planning on a clam bake right after we get there.”

Lizzie ignored her mother and ate several more grapes. “How much longer?”

“Stop asking.” Her mother readjusted her grip on the steering wheel. The car was fairly new, chosen because of its gas mileage, but it rattled on the inside so that much of what they’d said since leaving Memphis the day before had been yelled over the hum of the road.

“Is it more than an hour?” Lizzie worked her fingernail under the skin of the last of the grapes and peeled it.

“What do you think they’ll be like?” Of all the new relatives Jim had listed off, Lizzie had been most interested in the two cousins born improbably the same month and year as herself.

“Who?” Her mother leaned closer to the steering wheel, squinting at a road sign.

“The two,” Lizzie didn’t want to finish. It felt unlucky to ask about them.

“Elyse and Isobel? Everyone will be nice, like Jim.”

Lizzie sighed. After almost twenty hours in the car, the backseat had begun to feel small to Lizzie. She picked up the third book of the Narnia chronicles and stretched out, putting her socked feet on the window and using her soccer ball as a pillow to get just the right reading angle. The introduction of Eustace bothered her. She’d wanted all of the books to be mostly about Lucy, but instead there were pages and pages about their priggish cousin. Letting the book fall against her chest, she looked at Jim. Those first hours in the car, he’d tried to explain his family by naming his brothers, their wives, the aunts and uncles, and the cousins, who were all connected by blood back to a woman who was too old to be alive who lived thousands of miles away in the middle of an olive grove. She didn’t trust her mother’s opinion about the cousins and wanted to wake Jim and ask him again about the cousins, but she couldn’t quite form the right question.

It was, after all, too much, too fast. Jim had shown up after Christmas, and by the time Lizzie had finished second grade, he’d gotten married to her mother and moved them out of her grandmother’s house, where they’d always lived, into a sprawling ranch house that was so new it still smelled like paint and sawdust when they moved in. It wasn’t that she didn’t like him. She did, but she worried that Jim would act different with family. So far, being around him made her feel like that time her class went on a field trip to see how guitars were made and her teacher kept yelling at them to keep their hands in their pockets and not touch anything. Her stepfather kept his hands in his pockets around her.

The car slowed as they left the highway. Jim cleared his throat and sat up. Lizzie closed her eyes and pretended to be asleep. She felt him looking at her and then watched under her lashes as he took her mother’s hand. “It’ll be wonderful,” he said.

“It’s been just us for so long,” her mother said. “And before that it was just me and my mother.”

Her stepfather kept talking, but in an adult voice kept low and indistinct. She let her eyes close on their own, the lids like weights against her eyes. In the darkness, Lizzie’s mind conjured the instashark Jim had given her for her birthday a few months earlier. It had started out the size of her hand, but after three days in a plastic pool in their new backyard, the creature had grown nearly as large as Lizzie.
Instafamily.
Her eyes flew open as the car slowed for a turn and moved from the smooth asphalt of the road to a gravel driveway. Falling asleep was like time travel. An instant earlier she’d had an hour to prepare to meet them, and now she had just seconds.

“They’re all out front,” her mother said, tapping on the brakes to slow the car even more. “There are so many of them.”

“That’s not even everyone,” Jim said, rolling down his window and leaning out to wave at the group of people gathered in front of the large house.

“It’s enough.” Her mother pulled into the driveway in front of the house and turned off the engine. Lizzie watched them get out of the car. Jim slid his arm around her mother’s shoulders, and before he could introduce her, she was swallowed up by hugs and kisses from the half dozen adults who’d been waiting out front for their arrival.

Putting on her tennis shoes, Lizzie looked around at the children. Some of them were too young to walk on their own and were being held by their parents. She cracked open the far door, the one away from the chaos, and stepped out. She searched the swarm of bodies, looking for anyone who could be close to her age, worrying that being the same age wouldn’t be enough to be liked by her new cousins. Jim had promised that they were excited to meet her, but Lizzie knew how adults were with children: they never understood that kids, like adults, didn’t always get along. She tried to catch her mother’s eye without calling out for her, and just as she closed the door, she felt a hand slide into hers.

“Come on. If we leave now, we’ll get out of helping to carry stuff down to the beach.”

The hand was clammy, and as she grasped it, Lizzie felt the short, jagged fingernails and the torn skin around the cuticles. A second girl wrapped her arm around Lizzie’s waist.

“Stay low until we’re in the clear.”

As the three of them crept behind the car and then dashed for a clutch of bushes that lined the property, Lizzie tried to figure out who was who. The first girl, the one with the clammy hands, held herself with a confidence that was beyond her years. She wore red-framed glasses that kept sliding down her nose because of the heavy lenses. The other girl was rounder and softer with wide eyes and skin as perfect as a doll’s.

“Run,” said the girl with the glasses.

The three of them took off, and Lizzie, who’d always been fast, kept herself right at their heels. After a few moments, they slowed, looking back over their shoulders. The shorter girl, with bangs so long they fell into her eyes, offered Lizzie a sticky gumball from the pocket of her sundress and then introduced herself as Elyse. “You like gum?”

“Everyone likes gum,” said the other girl, who Lizzie decided must be Isobel.

“I should have told my mom we were going,” Lizzie said.

“Your mom won’t care,” Elyse adjusted her dress and smoothed her hair. “You’re eight, right? That’s how old you have to be to go to the beach without an adult.”

Lizzie reached for the gumball—it tasted like marshmallows. Back home, she wasn’t allowed to chew gum. She blew a large bubble and when it popped, she nodded in agreement, marveling that neither of her new cousins wore shoes. During the four- or five-block walk to the beach, Elyse and Isobel talked back and forth, finishing each other’s sentences and occasionally breaking out into a rhythmic snap, clap, stomp motion and then calling out “whoomp there it is.” They tried to teach Lizzie the pattern as they walked. Being with them felt familiar and gave her shivers of anticipation, like when her mother started a story with “a long time ago.”

“That’s the Robinsons’ place. They don’t like kids,” Elyse said as they passed the stone façade of a house.

“Last year they called the police on my brother,” Isobel said. “For shortcutting their yard.”

Where the asphalt turned to gravel, they stopped and did three rounds of the there-it-is dance, which Lizzie had figured out by then, and finished by hopping around on one foot three times in a circle before calling out “whoomp.” For no reason, Lizzie giggled.

“You have to tell the guard you’re local,” Isobel said, waving at the man sitting on a slowly turning stool in the small gatehouse at the edge of the parking lot.

“Your mom is wicked pretty,” Elyse said, drawing her long, wild hair over her face, reminding Lizzie of the crepe myrtles in Memphis and the way their bark peeled off in long dark curled strands.

“Wicked,” she said under her breath, trying out the slang.

“Don’t be a chucklehead.” Elyse flicked Isobel on the arm. “Mom also said you like soccer.”

Lizzie shrugged. She loved soccer but wasn’t sure how to explain that to her new cousins.

“We’ll all be good at different things then,” Isobel said. “I like to sing and Elyse likes to draw. You can be good at sports. We all like the color blue. That’s what we have in common—oh and our birthdays and the pact we made to never cut our hair.”

Elyse reached out and ran her fingers through Lizzie’s tangled blond strands. “Uncle Jim says now we’re like Charlie’s angels. He used to call us double trouble. But he’ll probably give us a new nickname now that there are three of us.”

“You’ll like Uncle Jim,” Isobel said, picking at a scab on her elbow until it started to bleed. She put the scab itself in the pocket of her overalls. “He makes pancakes and digs moats. Everyone thinks he should move back here, but Dad says you go where the jobs are.”

Lizzie listened to them but couldn’t find voice enough to add to the conversation. They seemed older than her friends in Memphis. More like fourth graders. The beach, with its beauty and vastness, made her want to cry out. She felt her heart constrict and then explode in an expression of joy at the sight of the white sand in a curving crescent shape and the marine blue of the bay. A creek bordered by a rock wall divided the beach in half. Visible about ten yards from the beach was a sandbar where dozens of people in brightly colored swimsuits played.

“We’re on this side,” Isobel called, when Lizzie started walking the wrong way.

“They divided it so that residents get one side and out-of-towners the other.” Elyse pointed: “No point in making friends with the kids on that side of the jetty. You have to be here, on the beach where everyone belongs.”