BOOK: Three Wise Cats
11.1Mb size Format: txt, pdf, ePub
Read Book Download Book
ads
“First watch?” Abishag asked.
“I intend to make this trip into a soldier's campaign. And soldiers stand watches.”
“Why?”
“To make sure enemies don't slip up on us.”
“Are you speaking of fierce dogs?”
Ira grinned in the dim light from the setting moon. “Dogs, owls, snakes, humans with brooms . . .”
“Will you two please quit talking so I can get some sleep!” Kezia hissed.
“Yes, ma'am.” Ira winked at Abishag and slipped behind the haystack. He climbed to the top of it, curled his long tail about himself, and settled in to watch. 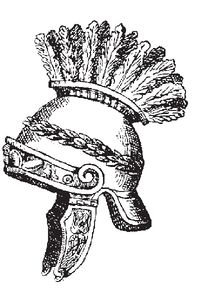 Three hours later, he leaped to his feet when something touched him on his back.
“Who's there!” he demanded and heard his foster sister laugh.
“Just me, Abishag.” She giggled and climbed up beside him. “Go get some sleep, Ira the Soldier. I think this sentry plan is a good idea. I'll watch until dawn for you.”
“But that's two watches,” Ira objected.
“Well, we'll have to stay hidden tomorrow once we're in the town anyway, so I may as well sleep then,” Abishag said practically. “And Kezia is truly tired, so let her sleep tonight. She'll take her turn, too, once she realizes it's the best way for us to be safe.”
“Well, then, good night.” Ira climbed back down the haystack and curled up a few inches from Kezia; he was sound asleep almost before he completed a quick bath.
Abishag stared up at the stars, frowning, until she located the North Star as Ptolemy had taught her to do.
So I keep my nose pointed to that and we'll find Lepcis Magna
.
I do wish Ptolemy had decided to come along with us. I miss him already, and we've only been gone a day. I hope the old astronomer doesn't die before we return. No one will look after Ptolemy at all then.
Dawn came, and Abishag stretched several times and licked a few stray hairs into place before picking her way down the haystack to where the other two still slept. Resisting the impulse to leap upon them and startle them awake, she patted Kezia with a paw.
“Wake up, Kezia; it's morning and we need to get hunting.”
The tabby stretched and yawned, then nudged Ira.
“Wake up, lazy one. We need to begin traveling again.”
After a quick breakfast of several foolishly inquisitive quail, they washed up and set out once more. 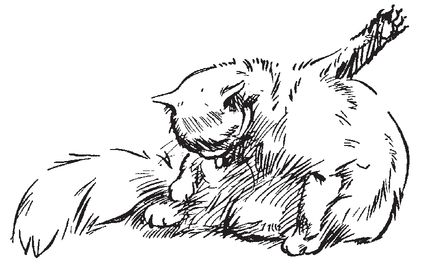 “My paws are sore,” Kezia said, worried. “I thought they would get tougher as we walked farther and farther.”
“Try resting them by walking alongside the road, in the grass,” Ira suggested. “And once we're in the village, we'll slip into someone's barn and see if we can't beg some cream to put on all our paws.”
Kezia brightened at the thought and kept trudging on, veering into the grassy places as she found them.
Off to the side of the road and running in a ditch worn by a small trickle of water, Asmodeus kept pace with the cats, grumbling to himself.
Tsk, tsk. I should never have set out on this journey. What was I thinking of, to join this foolishness? Did I not have sufficient provisions to steal and enjoy back at the tower? Oh, my poor feetâthey are throbbing and swelling so. It's all their fault, dratted cats
.
If they hadn't enticed me with
their dreams of glory and descriptions of feasts so real it made my mouth water, I wouldn't be here now.

The next days passed fairly uneventfully; the resourceful cats managed several times to put fresh cream on their paws, and then as they kept walking, gradually the pads became tougher. The three grew used to being outside and to relying upon each other. They were together now, for ill or for good, a small band of comrades set out upon a grand adventure.
4
T
HEY OVERHEARD PEOPLE talking as they lay resting underneath a small bridge the sixth morning of their first week's travel.
“We near Lepcis Magna,” said a woman's voice. “I hope to earn our bread there by baking it.” The cats heard only a grunt in reply and peeked out to see a man yanking the bridle of a heavily laden donkey. 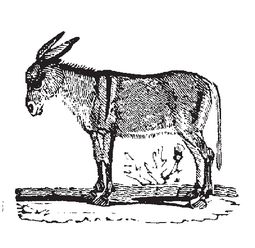 “Move, you filthy beast!” He slapped the animal on its hindquarters, but it refused to move.
Two extremely dirty little girls caught sight of the cats and made a squealing, excited dash straight for them. Kezia raced toward a rabbit's burrow; Abishag scurried under a tree root; and Ira leaped behind the stone bridge support. The girls scrambled about on the dry creek's banks and stones, driving Ira from his first hiding place and under some thorny bushes. Their mother screamed at them, threatening dire punishments if they didn't rejoin their parents promptly. Finally the girls, arms and faces scratched from the bushes, gave up trying to catch the black male cat. They had turned back to the road, reluctantly following their parents, when the youngest shrieked:
“Oooh, a rat, a disgusting rat!”
“See, Mater? That's why we need a cat for our new home,” the oldest daughter whined.
“We need no cat,” their father groused. “Leave it. And hasten yourselves, for this stupid donkey has decided to trot once again, and I will not halt it.”
Once the family was out of sight, the three cats crept out from their hiding places and met on the now-empty road. They touched noses. “That was a close call,” Kezia said. “And what was that about a rat?”
Ira was sniffing the air. “I think we may have company. That stink is too familiar.”
“What's that noise?” Abishag turned quickly and looked down the road. “I've never heard anything like that before.”
An odd thumping, a jingle, and other sounds they couldn't identify were moving toward them.
“I think we'd better hide again,” Kezia said, and she fled back to the rabbit's burrow she'd found so fortuitously.
Abishag raced up the same tree whose root had sheltered her and sat on a branch close to the trunk, her black fur seeming to be part of the rough bark.
Ira, fascinated by all the many noises, still sat in the road, turning his head, his upper lip flehmening.
“Get out of the road!” Abishag hissed at him.
Just then, a creature bigger than any of them had ever seen in their lives appeared. Whatever it was, it had fur and four legsâbut it was far too huge to be any sort of a cat, or even the largest of dogs. It dragged some contrivance behind it that glittered in the sunâwith a human standing inside. Ira stared until his ears hurt because his eyes were open so wide.
A sudden rustling sound behind him, and Asmodeus streaked across the roadway and right under the nose of the creature. First it snorted and then it screamed. It suddenly stood on its hind legs, making odd moaning noises and striking out with its front paws. The human cursed and pulled at some ropes the creature had tied to its fur, while the thing it dragged tilted and nearly fell. Frightened, Ira lost his wits for a moment and cowered as the huge beast staggered closer and closer to him. Abishag began scrambling back down the tree.
Kezia ran out from the burrow just in time to see the huge creature standing and trembling with all four paws back on the road's surfaceâand Ira lying in the dirt. With a cry, she ran to the black cat's body. Abishag joined her and they began calling their foster brother's name, frantically pawing at him and licking his face.
“What kind of a warhorse are you, you fool?” Lavines Gracus shouted at the creature. “The gods would not have you for a pack animal! You enter battles bravely enough and yet nearly kill me because of an outsized mouse!” He called to his servant, Citus, who had scrambled from the chariot when it first began to sway. “Take the reins!”
He stepped down from the chariot and took off his helmet, running a hand through the thick hair beneath it. He glanced at his
centuria
, his company of soldiers who had halted, still in formation, when they saw their commander's horse panic.
Kezia and Abishag were too worried to notice anything going on around them, still trying to determine if Ira lived.
Ira finally roused himself, protesting, “Stop it, girls, you're going to lick off my eyebrows.” Then he moaned softly. “Ow, that hurts. I feel sick . . .”
“What's wrong? Where are you hurt?” Abishag stopped licking his face and stepped back to get a good look at him. His left front leg was at an odd angle.
Just then, the Roman centurion turned and saw the three cats beside the road. His face paled.
“By Mars's shield,” he said breathlessly. “My dreamâit must be an omen from the gods.” He pointed to the group of cats with one hand and motioned his servant over with the other. “I dreamed about these three just last night. Two black cats and one striped tabby.” He frowned. “But none of them were injured. I hope I have not offended any of the gods, so that they take their favor from me.” 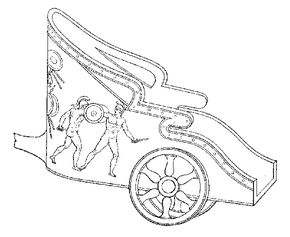