To Crown a Caesar (The Praetorian Series: Book II) 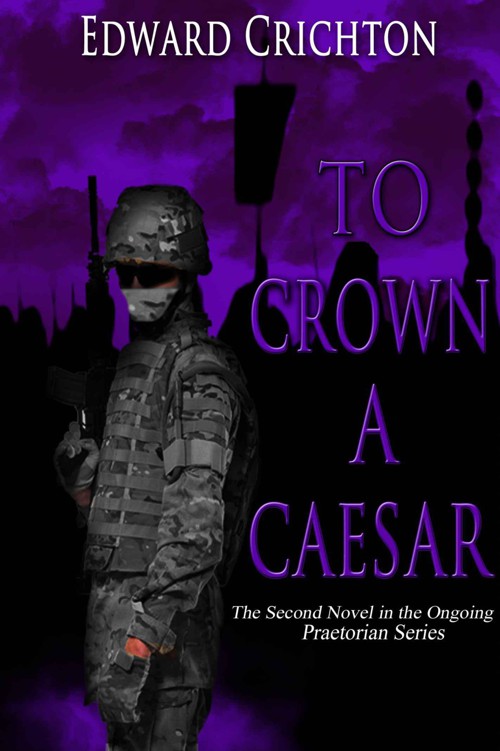 To Crown a Caesar

Book Two in the Ongoing

This ebook is
licensed for your enjoyment only and is not to be reproduced, resold, or altered in any way.  The author thanks you for respecting his intellectual property.

Once again, I’d like to thank the usual suspects: Alex, Amanda, Anita, George, Michelle, and Taras.  Each of you offered one piece of advice or another on how to make this story better than what it was before, and I can’t thank you enough for it.  Let’s just be a little quicker about it next time.

The Last Roman (B
ook I)

To Crown a Caesar (Book II)

A Hunter and His Legion (Book III)

If you’re reading this, and not in the military, you should know that those of us who are perform something called after action reports.  If you are in the military, skip to the next paragraph and pick up there.  After Action Reports, or AARs, are done after the completion of a military action or mission.  Whether successful or not, these AARs serve as evidence of what occurred in the field and a way to identify missteps or mistakes made from which to learn from.

By now, you’ve probably already become familiar with my previous journals, the ones that have chronicled the last few years of my life.  Those were silly, informal affairs meant to keep my own mind from slipping into delirium as my friends and I fought our way towards the present.  What is to follow from here will be a more precise accounting of our actions and decisions, but I’ll try to keep it interesting in case it isn’t some hardass military officer with a stick up his ass that finds
these things.  Believe me, things are about to get far more interesting than what you may or may not have already read to date.

So.  Where to begin?

I guess the beginning would be as good a place as any.

If you’re not already wondering, and you really should be by now, especially if my other journals haven’t been recovered, there’s a reason why the words in this notebook are written in blue pen, in English, and with poor syntax and grammar.  Manuscripts dating back to the 1st century generally aren’t, but I implore you to keep an open mind if I say something that contradicts what you think you already know.

My name is Jacob Hunter and here’s my sit-rep.

That’s “situation report” for you non-military type folk.  A
… summary update, if you will.

The world I once called home had been engulfed by a global war, the third of its kind.  It began early in the 21st
century, but by 2021, the world had been on the brink of destruction.  I had spent most of my short adult life in the U.S. Navy fighting in that war, but for reasons I had been quickly regretting and it wasn’t long after my own brush with death that my life – my war – found meaning once again.

Approached by a representative from the
Vatican, I accepted a job that took me from the U.S. military and into the service of the Pope.  I had become a Papal Praetorian, a modern day equivalent of the ancient bodyguards who protected Rome’s emperors two thousand years prior.  I, along with six other individuals, created the second of such teams, tasked with the elimination of threats against the Pope.

Two Brits, a former Swiss Guardsman, a Frenchman, another American, and a female German made up the team, each as diverse as the next, but joined by a common cause.  Our commander, Major Dillon McDougal, was killed in action on our very first mission, an accident that was mostly my fault.  James Wang, small and deadly, was our team medic.  Vincent (I never did learn the rest of his name) was a priest, at least that’s what he started as before he admitted to being nothing but a fraud.  His reasoning for the subterfuge had been sound, but I still never completely forgave him f
rom keeping the truth from us.

He served as our defacto commander after McDougal’s death.

Jeanne Bordeaux was our heavy gunner and demo man.  John Santino had been a very close friend of mine before we had independently joined with the Pope.  He was a fucking asshole, with an annoying talent for cracking horrible jokes at inopportune times, but even though his personality could grate on even the most stalwart, he was a good soldier, and I wouldn’t trade him in for anyone.  Except Helena van Strauss, of course.  She was our team’s sniper and became something far more special to me along the way.

With the team assembled, on our very first mission, after very nearly botching it completely, we were accidentally transported through time and space to ancient Rome, during the reign of Caligula.

Let me give you a second to let that sink in.

I’m not going into the theoretical science behind it because it’s so confusing, I don’t even understand it anymore – and I thought most of it up!  All we know is that upon our arrival in Rome, we were met by real Praetorians and taken before the emperor.  Caligula was nothing like he was supposed to be, at least, as he was supposed to be a few months from when we showed up.  I’m something of a history buff, and know quite a bit about the time period we found ourselves in, but while it was initially useful in understanding what was about to happen, we quickly found that the more we got involved, the less a benefit our hindsight became.

As for Caligula, he immediately took a liking to us, and made the decision to use us for his own purposes.  As ominous as that sounds, he wasn’t crazy, and despite my reservations about interacting with the timeline, I felt we could have ac
tually done some good for him.

Others w
ere not so sure.

Caligula’s uncle, Claudius, was also nothing like he was supposed to be.  You won’t know this, but Claudius was supposed to be an intelligent and soft spoken man disguised as a bumbling fool.  I don’t really know what you know about him, but that’s what I knew,
even if he was everything but: tall, good looking, athletic and devious to the core, he was no friend of his nephew or us.

Anyway, when Caligula became very ill, an event some considered a possible reason for why he originally went insane, Claudius took advantage.  With the help of disloyal Praetorians, he attacked the House of Augustus.  Luckily for Caligula, if not the timeline, we were there to nurse him back to health, changing history in the process.  Then, with the help of a few loyal Praetorians, we escaped Rome and made our way north, hooking up with a legion in training that was camped for winter.

And then Agrippina showed up.

Sister of Caligula, mother of Nero, master conniver, slut, and traitor to Rome.

She
brought with her a story about how her son had been kidnapped by Claudius and that it was imperative we rescue him.  In order to secure my participation in the rescue mission, she tried to seduce me, which I, of course, refused, but I agreed to help anyway.  With the aid of Santino, we set off to rescue her son.  Once in Rome, we were betrayed, captured and crucified (obviously we survived that one), but only I suspected Agrippina’s involvement.

I suppose now w
ould be a good time to mention the time traveling blue ball.  No, it’s not a sexual problem, but in fact the object responsible for our temporal journey.  A time machine.  How does it work you ask?  Good question.  No idea.  All I know is that past events can be altered, unlike some theories that state that whatever is done in the past by a so called “time traveler” was somehow already done by him in some kind of circular existential existence.  Like for instance a guy that was sent back in time to father the child that would, in turn, send him back to knock up his mom to ensure that the robot rebellions would…

To make matters worse, Claudius thought I was the key to working it, but I was
little more than a hapless victim.  He tried to extract information out of me, but his plan was foiled by Vincent and company when they infiltrated Rome under the cover of Galba’s besieging army.  Santino and I were pretty messed up, and it took us weeks to fully recover, but we had plenty of time to burn before the climactic battle scene at the end of the movie.

But
I won’t go into the details concerning that.  They’re still too painful to recall, but it ended in a return to the status quo.  More or less.  And only temporarily.

After the battle, things could not have seemed more perfect.  While Wang, Bordeaux, and Vincent moved on to other endeavors away from Rome, Santino, Helena, and I stayed on as honorary bodyguards for Caligula.  It was the cushiest job of my life.  But it
wouldn’t last.

When the three of us attended a dinner party thrown by Agrippina, still innocent in
the eyes of Roman high-society, Caligula used the opportunity to announce his decision to name Nero as his successor.  The boy had been at the party, and even though he was only a few months old, I could already see the monster he would become.

Again, I have no idea what you know about history but try and keep up.

No more than two minutes after the announcement, Caligula was assassinated by poisonous mushrooms.

Except o
nly I knew who did it.

In my timeline, which by now you
may have determined is far different from your own (Again, I have no way to predict either way), Agrippina was married to Claudius and many thought she later murdered her uncle-husband with poisoned mushrooms.  The look she gave me as Caligula convulsed on the floor all but confirmed it, and I knew our lives were in danger as well.  Santino, Helena and I fled Rome that night, and haven’t been back since.

Th
at was three years, eight months and nineteen days ago.

At the time, I knew of only one man who could take on the job as emperor of Rome.  Someone who could take it back from the clutches of someone like Agrippina and lead it back to prosperity.  I knew he could do it because he had already done it in my history books.

So, armed with a vague outline of a plan and the idealistic fantasies of childlike optimism, the three of us set out to make sure the reign of Nero never arrived.  It would be bad enough with Agrippina in charge, ruling in regency until her son was old enough to take over.

We’d gone north and waited, spending
years helping those who couldn’t help themselves, every act of kindness leading us to the here and now.  Please see my other journals for further information – a series of wonderfully fun and whimsical short stories – but, to be honest, if you’re reading this, you may already know more than I do about what happens than I do.  Then again, you might not, but I’m glad if you do because the suspense is killing me.  Hopefully, things turned out all right, but if they didn’t, at least this log will be a record of what happened.

Okay.  Got to go.  Things are about
to start getting interesting.

If this shit ever gets turned into a movie, I want my name on it.  Jacob Hunter.  And for crying out loud… have some respect for the source material.