To Love a Wicked Scoundrel 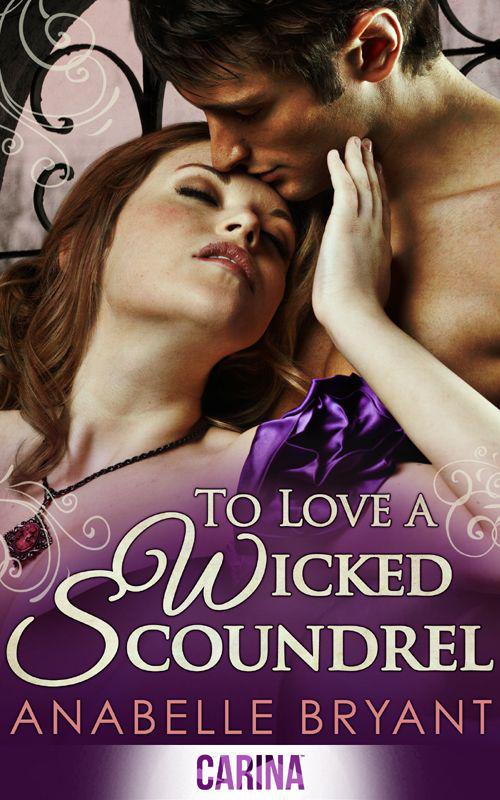 Is there a Lady in the land that can resist this scoundrel’s charms…?

At her step-mother’s command, Isabelle – and her irrepressible step-sister Lily – are leaving the pleasantries of the English countryside behind them, and heading straight to the bustling heart of a London season. Isabelle couldn’t care less about fashionable society, and is even less interested in the name on the lips of every ballroom gossip - Lord Constantine Highborough, reputedly a scoundrel of the highest order! But once he sets eyes on the stunningly beautiful Isabelle, London’s most notorious rake knows exactly where to direct his devilishly bewitching smile.

And everybody knows that Constantine
always
gets what he wants, usually leaving a trail of broken hearts behind him…

To Love A Wicked Scoundrel

Anabelle Bryant began reading at the age of three and never stopped. Her passion for reading soon turned into a passion for writing and an author was born. Happy to grab her suitcase if it ensures a new adventure, Anabelle finds endless inspiration in travel; especially imaginary jaunts into romantic Regency England, a far cry from her home in New Jersey. Instead, her clever characters live out her daydreams because really, who wouldn’t want to dance with a handsome duke or kiss a wicked earl?

Though teaching keeps her grounded, photography, running, and writing counterbalance her wanderlust. Often found with her nose in a book, Anabelle has earned her Master’s Degree and is pursuing her Doctorate Degree in Education. She proudly owns her addiction to French fries and stationery supplies, as well as her frightening ineptitude with technology.

A firm believer in romance, Anabelle knows sometimes life doesn’t provide a happily ever after, but her novels always do.

She enjoys talking with her fans. Visit her website at
AnabelleBryant.com
.

A first book is a dream come true and a goal hard won. It’s been a long journey and I owe thanks to many cherished people in my life. To my parents and sister, thank you for believing in me when I gave up on myself. I value your confidence in my ability above all else.

To BB and KB, the most loyal friends on the planet, my sincere gratitude. You always listened, knowing the right things to say and not to say; a most valuable gift indeed. Thank you for replenishing my spirit and reminding me first I had to climb the mountain before I could enjoy the view.

To my Facebook friends, you span the globe and I love you all. You make every day brighter and prove the world is filled with glorious, generous people. I know you in my heart no matter the distance.

Lastly, I’d like to thank Eloisa James. You inspired me first with your writing and then with your heartfelt advice to never compromise my dream. Your words made all the difference. Thank you for taking the time.

This book is dedicated to the loved ones in my life – David, Nicholas, my family and friends – for their endless encouragement and support. Thank you with all my heart.

Isabelle pushed the trowel into the soft earth and uprooted the offensive weed that dared sprout between her prized yellow wood violets. A smile curled her lips as she viewed the twin petal blooms with their dainty heart-shaped leaves. A gloomy spring had caused her worry the delicate plants would not survive, but now, seeing the results of her attentive ministrations, she delighted in the cheerful addition they made to her modest garden. She glanced to the narrow plot of flowers, rich in variety but limited in number. How lovely it would be to have a larger landscape to tend and a greenhouse to protect her most precious blooms.

At times, she indulged in daydreams and envisioned herself the mistress of an elaborate estate where extensive lawns brimmed with exotic flowers of every colour imaginable. Usually a firm shake of the head dismissed these thoughts as fanciful. As a twenty-six-year-old genteel lady, Isabelle Rossmore took pride in her sensibility and often chided herself she was too old and too logical to permit far-fetched illusions to waste her precious time. Refusing to allow temptation to woo her, she removed her gardening gloves and stroked the velvety petals of the violet before her.

The introspective moment did not last and a squeal of delight pealed through the afternoon solitude. Isabelle smiled as her sister Lily – stepsister, if one strove for exactitude – scurried down the garden path and flitted towards her as sharply as a bluebottle. Her nursemaid was nowhere in sight, left behind again, no doubt. She stood as Lily approached and tucked away the wayward curls that always escaped her braid.

The six-year-old never failed to cheer her with an enthusiastic welcome. Lily was the offspring of her father’s second marriage to Lady Meredith, and Isabelle and Lily held a great affinity for each other’s company.

‘Do be careful or you will tumble straight into the violet bed.’ Her affectionate tone removed any threat of admonishment and she brushed free the small bits of earth that clung to her skirts before she pressed a kiss to Lily’s head. ‘Your mother will not be pleased if she discovers I insisted the gardener occupy himself with other tasks so that I complete the weeding.’

Fortunately her stepmother rarely ventured into the garden as most flowering plants caused her to sneeze, and in this way the inconvenience of having an aversion for all things botanical saved Isabelle from Meredith’s vociferous chatter. She enjoyed the serenity found among her plants, except of course, if Lily chose to join her.

Isabelle reached forward and plucked a forgotten leaf from her gown. She cast it aside before she gathered Lily’s hands in hers, the child’s eyes bright with excitement.

‘We are going to London!’ Lily tilted her head and her dark curls tumbled in disarray as she bobbed with impatience.

Isabelle’s brows rose with curiosity, the exuberance of Lily’s announcement unsettling. ‘Whatever are you talking about? We are not going to the city, of that I am sure.’

London was the last place Isabelle wished to visit. She preferred her comfortable life, tucked away in her childhood home in Wiltshire, a clear one hundred miles from the bustling clamour. No reason existed for her not to continue doing so. Theirs was a county family and Rossmore House the only home she’d ever known. Modest by most opinions, the house was composed of titian-coloured brick with few mullioned windows and an overgrown chestnut tree. Yet the entrance boasted a charming trellis of wisteria and clematis intertwined. Isabelle glanced towards the house and her heart warmed.

Releasing one of her sister’s hands, she bent to retrieve her gloves and the metal trowel, before placing both in the wooden box under the bench near the dog rose bushes. Then the two strolled the flagstone path towards the house as Lily’s maid arrived just in time to turn around.

‘It is true. We are going straightaway. Mother said she doesn’t want to wear black bobzine any more.’

‘Bombazine. It is called bombazine.’ With a wry smile at the mispronunciation, Isabelle considered the news. It
was
time for Meredith to come out of mourning. She had stopped wearing mourning gowns a few months prior. Certainly she could not dispute whether her stepmother was tired of the horrid black frocks. At thirty years, a mere four years older than she, Meredith was too young to be confined to widowhood. One did not always have the luxury of planning the path of life. No one expected her father to wake up on that particular Thursday, eat a vigorous breakfast and then clutch his heart, expel a few ragged breaths, and fall forward onto the damask tablecloth. Much to her dismay, life was full of unexpected experiences. Isabelle preferred predictability.

‘I think London will be grand.’

Isabelle eyed her stepsister’s enthralled expression and bit back an immediate retort as she fought hard against the leap of fear in her chest. London was crowded and busy and terribly noisy at the height of the season. Perhaps Meredith merely wished to shop for a new wardrobe. They could well afford it, her father having provided for them handsomely. But if it were just a matter of a new wardrobe, why would they all need to journey to the city?

Her thoughts raced as they entered the main house. Lily pranced to the centre stairs, her never-ending energy a challenge to any adult, even one accustomed to the child’s enthusiastic nature.

They found Meredith in her bedchamber, tossing gowns into a large traveling trunk as she hummed a cheerful melody. Two maids appeared equally busy in the adjoining dressing room. Lily climbed upon the four-poster bed and fell back onto the overstuffed pillows in delight as Isabelle swept her eyes across the room. Her gaze settled on the open trunk already halfway filled.

‘What is this about?’ Trepidation snuck into her voice.

‘I am so tired of these widow’s weeds. I need to embrace the life I hoped for before I married your father. And do not tell me I am not making sense.’ Meredith threw a glare in Isabelle’s direction as if to abbreviate any ready rebuttal; she paused, distracted by a tangle of stockings.

For once Meredith did not voice her true sentiments, but Isabelle knew well her stepmother’s opinions:
My marriage to your father was a business deal more than a love match and I did my best to make him happy and give him the son he desired.

It was no secret in the household. Lord Rossmore wanted an heir above all else and viewed Isabelle, and later Lily, as disappointments. Isabelle suffered the worse for it and learned at an early age how to disguise her melancholy and accept her father’s disapproval under layers of practical rationalisations. When he remarried, her father selected his second bride for her youth and presumably fertile lineage partial to male offspring. How Isabelle hoped things would change and her father would come to love her once Meredith bore him a son, but that day never came. Unlike Isabelle, Lily was too young to experience the hollow ache of knowing she’d given her father nothing aside from unending displeasure by being born female.

Busy deciding between two pairs of shoes, Meredith offered no kind glance to soften the mention of the painful memory and prattled on, shoving the discarded brown boots to the side much like the former subject.

‘Surely you cannot expect me to live out the remainder of my days hidden away in the countryside without social interaction. Without male interaction.’

‘Meredith!’ Isabelle’s eyes flared as she nodded towards the bed where Lily remained preoccupied with piling ruffled pillows into a lopsided tower. Nary a word passed those tiny ears undetected.

‘Oh posh. You are for ever the worrier. This is an opportunity to live, truly live. Lily is excited to go and I will be taking her with me, so you need to make a decision. Do you stay here in the middle of nowhere tending your flowers or do you embark on a grand adventure with the two of us?’ Meredith paused and pinned her with a stare, expecting a prompt response.

The matter of Lily’s welfare weighed upon Isabelle’s conscience and the decision as to whether or not she would spend the season in London. They were inseparable, and Isabelle embraced the role of older sister, frequent mother and constant companion.

WHO KILLED EMMALINE? by Dani Matthews
Kolia by Perrine Leblanc
All Hallows Heartbreaker by Delilah Devlin
Unknown by Unknown
SPOTLIGHT by Dora Dresden
Dust by Hugh Howey
Tommy Gabrini: The Grace Factor by Mallory Monroe
The Viscount's Christmas Temptation by Erica Ridley
The Testimony of the Hanged Man (Lizzie Martin 5) by Granger, Ann
Star-Crossed by Jo Cotterill
Our partner