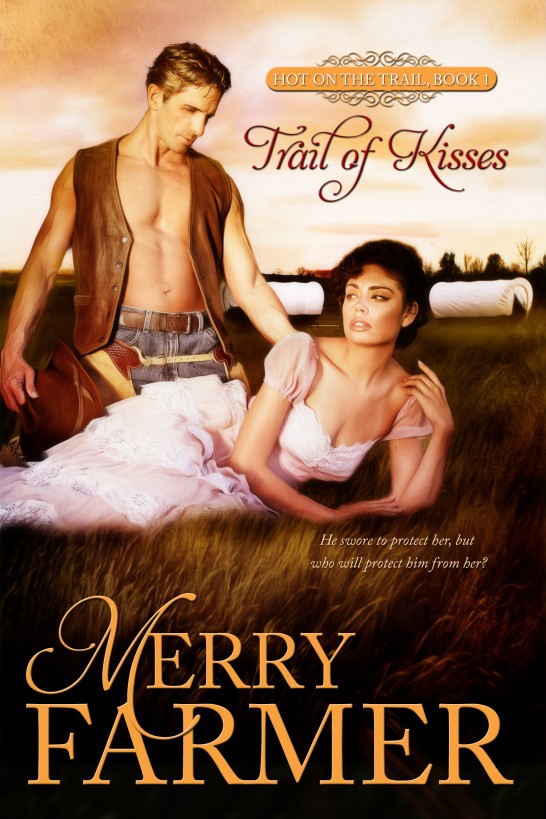 For the entire Pioneer Hearts
gang

I truly did write this one for
you

The first glimpse Lynne Tremaine had of the
mass of wagons that would take her west was enough to sink her
heart. As far as she could see, big, bulky “prairie schooners” with
covered beds, driven by teams of dull-eyed oxen cluttered the
starting-off point at the end of town. The oxen lowed, anxious to
get moving. Hawkers shouted about their wares in a last-minute
attempt to sell supplies to plainly dressed pioneers. Wagons
creaked as they inched toward the line their trail boss was trying
to make to impose order. Horses clopped and children shrieked as
they vented their excitement. The smell of animals and dirt was
everywhere. It was almost more than Lynne could bear.

“
Please, Papa.” She clutched her
father’s arm as he escorted her through the chaos. A pair of
children being chased by a dog cut in front of them. “Please don’t
make me go. I want to stay with you, my papa.”

Judge Thomas Tremaine, tall, distinguished,
and out of place in the bustle of pioneers, patted his daughter’s
hand, eyes sad and shoulders stooped. “Now, Lynne, we’ve discussed
this. It’s safer for you to accept your Uncle George and Aunt
Marion’s invitation to move to Denver City.”

“
We did not discuss this and it
isn’t safer,” Lynne argued. She was too old to pout, but her heart
broke at the thought of leaving her family, her home. “We don’t
know who any of these people are. How is it safer to send me off to
the middle of nowhere with a mob of strangers?”

Judge Tremaine stopped and turned to her,
leaning closer. “My dear heart, threats have been made against us,
against you, of a serious nature. The Briscoe Boys are not some
mischievous ruffians out to pull pranks. They are a vicious,
organized gang. They’ve killed men, they’ve burned farms,
they’ve….” He shook his head, as if the rest was too horrible to
speak aloud. “Sentencing two of them to death this winter was just
and right,” he went on, “but if I had known they would see justice
as a call to threaten my family, to threaten you? Well, I would
have still passed the sentence, but I would have made sure you were
protected from threats before the verdict instead of after. Violet
and Marie write that they’re settling quite nicely in Lexington
with your Aunt Philomena. It’s time you sought your own safety as
well.”

“
And leave you alone?” Lynne
protested.

“
I would rather be alone for a
time than continue to see you lock yourself in the house, only
going out under guard, like a prisoner. If accusers become
prisoners in their own homes for fear of reprisal from gangs, then
nothing I do as a judge means anything.”

Her father smiled, pride beaming from him.
“Yes, I don’t doubt it. My brave girl.”

Lynne’s heart swelled, in spite of the fact
that he was still calling her a girl when she was twenty-two. She
loved him so.

“
The Briscoe Boys won’t come
anywhere near me, you’ll see,” she said.

Her father sighed and took her arm, starting
forward through the rows of wagons once more. “If only it were that
easy. When explicit threats are made to slit the throats of all my
children, I can’t pretend the threat means nothing. George and
Marion have established themselves well in Denver City. They own a
mining company and have done quite well for themselves. You’ll be
happy there.”

They dodged around a group of running,
laughing children and past a wagon full of rough, wiry men who
watched them with curiosity.

“
How can you say that, Papa? I’ll
be hundreds of miles away from you, from Robert and Graham, from
Violet and Marie,” Lynne said.

“
Robert and Graham are off
fighting for the Union,” her father said and shook his head.
“Violet and Marie are happy where they are. They are prolific
writers, and with the speed of the mail these days, it should only
take a few weeks for you to get their letters.”

“
We would all be better off
together, as a family,” Lynne insisted. “If I have to go, then we
should all go as one.”

They stopped in front of a wagon that looked
like every other wagon in the sea of eager pioneers spreading out
around them. It was long and sturdy, with large, metal-rimmed
wheels and a thick canvas cover over tall loops. Through the
opening in the back, Lynne could see the trunks she’d been forced
to pack in the last week. All of her clothes that could fit were
folded into a large black trunk while anything else she had wanted
to take, from books to linens to sewing supplies, were crammed into
a wooden hope chest. The wagon was stuffed with other boxes as
well, crates and barrels of supplies for the journey and a few
boxes that her father was sending to Uncle George. The sight of it
all made Lynne’s shoulders sag in defeat.

“
Do I have to go as part of a
wagon train, Papa?” She tried one last defense. “Why not send me to
Denver City on a stagecoach? It’s much faster.”

Her father smiled. “My dearest, if you think a
wagon train is cramped and uncomfortable, then you wouldn’t want
anything to do with a stagecoach.”

Lynne crossed her arms and turned her sad
frown from him to the back of her wagon, reluctant to admit that he
was right.

“
Besides,” he went on, “I’ve heard
far too many tales of stagecoaches being robbed by highwaymen or
attacked by Indians since the war started. Too many of the soldiers
that used to man way stations along the trail have been called back
East to join the war. There is safety in numbers, and so you will
go to your uncle and aunt this way.”

“
No, my dearest, no more
arguments. It has been decided.”

Lynne let out a breath, dropping her arms to
ball her fists at her sides. She was not used to losing arguments,
particularly when the stakes were so high.

“
Now, let me introduce you to the
men who will be watching out for you on the journey,” her father
said.

Lynne’s brow flew up at the unexpected
comment. “Men? Watching out for me?”

Her father led her to the front of the wagon.
A boy who couldn’t have been older than fifteen sat on the wagon’s
seat, whip already in hand. He had dirty brown hair and the barest
hint of scruff on his chin and upper lip. He took one look at Lynne
and fumbled to stand in the wagon, scraping his shin on the
buckboard. A broad grin spread from ear to ear across his blushing
face. He had freckles peppering his cheeks under the scruffy
growth.

“
This is Benjamin,” her father
explained. “He’ll be your driver. He came highly recommended by the
man who sold the wagon to me.”

“
How do you do, Benjamin?” Lynne
held up a hand to him with a polite smile.

Benjamin blushed brighter and took her hand,
pumping it up and down. “Right well, ma’am.”

Lynne was charmed in spite of herself. She
just hoped the boy knew which end of the oxen should point
forward.

“
And this is Cade Lawson,” her
father went on. “Your uncle hired him to be your
escort.”

Lynne turned to see another man striding
toward her, leading two horses. One was her own mount, Clover. Cade
Lawson was a sight to behold. Tall, with broad shoulders and a
narrow waist, he walked as if he owned the wagon train. Sunlight
caught golden highlights in his hair and teased tiny lines around
his blue eyes. He smiled with a confidence that bordered on
arrogance. It was the kind of smile that could send a girl’s heart
fluttering. It was also the kind of smile that screamed trouble.
Lynne felt her cheeks warm in spite of the wariness that
too-charming smile brought her.

“
Mr. Lawson, I’d like to introduce
you to my daughter, Miss Lynne Tremaine.” Her father took a half
step back to present her with a proud smile.

“
Miss Tremaine.” Cade nodded, eyes
flashing. He didn’t extend his hand to her. It was as rude of him
as it was challenging.

“
Mr. Lawson,” she replied,
accepting the challenge. She folded her hands demurely in front of
her. If he wasn’t going to be a gentleman, then she wasn’t going to
go out of her way to teach him manners. She turned to her father.
“What do you mean, Uncle George has hired him to be my
escort
?”

“
I mean just that,” her father
replied. “Mr. Lawson has been charged with accompanying you on your
journey and seeing you safe to Denver City.”

Lynne took another look at Mr. Lawson. He was
solid and strong, like trouble in reasonably well-kept clothes.
He’d been send to mind her, like a nanny minds a child. It didn’t
matter how tempting he was, Lynne bristled.

“
Thank you, Mr. Lawson,” she said,
tilting her head up, “but I won’t be needing an escort to Denver
City. I am brave enough to make the journey on my own.”

“
Now Lynne.” Her father hooked his
thumbs into his vest pockets. “This matter isn’t up for discussion.
It is far too dangerous for a woman to travel in a wagon train
alone. Far too dangerous and far too scandalous.”

“
Is it any less scandalous for me
to be traveling in the company of a man I don’t know?” she asked.
“
There’s
the scandal, if you ask me.”

Her father frowned. “I have informed the trail
boss, Mr. Evans, of the purpose of Mr. Lawson’s presence. He has
assured me that he will make certain no untoward rumors are
circulated amongst your fellow travelers.”

Circus of the Grand Design by Wexler, Robert Freeman
Rae of Hope (The Chronicles of Kerrigan) by May, W.J.
Dial M for Meat Loaf by Ellen Hart
In the Paint by Jeff Rud
Galleon by Dudley Pope
The Mating Season: A Paranormal Shifter Romance by Jade White
Guardian Awakening (The Guardians Series) by Rhua, Michaela
Wolfblade by Jennifer Fallon
That Takes Ovaries! by Rivka Solomon
The Sixth Labyrinth (The Child of the Erinyes Book 4) by Rebecca Lochlann
Our partner