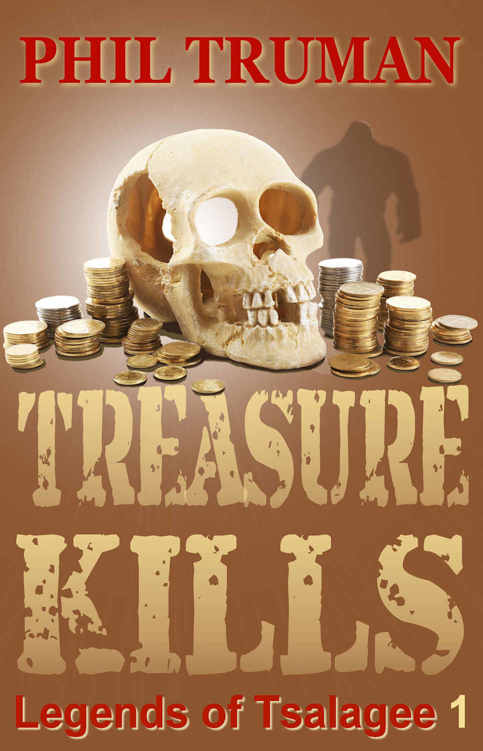 “Each character’s personality came to life. I almost felt like I was there. I would definitely go see this if it was made into a movie… the characters are what kept me intrigued, laughing, curious and sympathetic…I’m definitely going to be looking for [Phil Truman’s] other books and his future work. Kudos to Mr. Truman!”

“I actually started this book by accident, meaning to read another first, but after the first chapter I couldn't put this one down, I was hooked! L
egends of Tsalagee
is THAT good!”

“I read the last third of
Legends
in a hot summer afternoon in a hammock and enjoyed it greatly. Nice to see how all the legends in the story came together --the Belle Starr treasure, the Hill Man, and the old coots Hayward and Soc. I'd love to see a movie of this story… I commend Mr. Truman for writing it.”

“The ending was absolutely great… I laughed so hard in some places. I think you will really enjoy it, it is a hoot.”

“A great combination of a treasure hunt, murder, a little romance and some great laugh out loud situations… Phil did an outstanding job bringing this story together in an interesting, fun and easy to read fashion.”

“I loved this book. It had me hooked from page one, it has everything I love in a book, good storyline, great characters, mystery and humor. I would recommend this book to my family, and friend's, and of course to complete strangers. A must read!!”

“This book is extremely well written with a unique concept. I was left wanting more! The characters are well developed and they tie into each other nicely. I enjoyed this book! I will definitely look for more from this author!”

A Fight for Freedom...

The second story in the West of the Dead Line series is yours for FREE -
just tell me where to send it
.

Early in the American Civil War, when the young slave, Bass Reeves, is captured by a Union spy in Arkansas he unwittingly begins the journey toward his destiny.

Escaping the spy, young Bass finds his way into the encampment of the 2nd Cherokee Mounted Rifles of the Confederate Army. There he joins the fight which history will call the Battle of Pea Ridge, and must decide whether to stay safe in his old ways, or escape to freedom.

Sign up for the no-spam newsletter and get SEVEN full-length ebooks, one each from seven of our imprints;
Deadly Niche Press,
Roots & Branches
,
Buoy Up Press
,
Devoted Books
,
AWOC Westerns
,
AWOC Teens
,
and
AWOC.COM Publishing,
all for free. Details can be found at the end of this ebook.

(Previously published as
Legends of Tsalagee
)

An imprint of AWOC.COM Publishing

No part of this publication may be reproduced, stored in a retrieval system, or transmitted in any form or by any means, electronic, mechanical, recording or otherwise, without written permission, except in the case of brief quotations embodied in critical articles and reviews.

To Bob Lawson, who insisted I write this book.

The circumstances of Buck Buchanan’s death in the spring of 2004 puzzled everyone... that is, everyone except his killer.

Nobody disliked Buck and it didn’t appear he’d been robbed, which is why almost everyone, including the sheriff, thought his demise probably resulted from an accident. Still, Buck had worked around farm machinery for most of his seventy-six years, and, since age ten—after having seen his older teenage brother eaten by a silage cutter—he’d treated all of it with the utmost respect. And the tractor pulling the disking implement, which apparently had run over Buck, stood stopped with the motor switched off not ten yards past the mangled body of Buck. The coroner found a depressed skull fracture on the right side of Buck’s head, and an underlying epidural hematoma, which he determined to be the cause of death, and not the mincing of the tractor implement. But no one could come up with a motive, much less a suspect.

“They killed him,” Lorene insisted. In fact, that’s all Lorene ever said on the subject. When the sheriff or anyone asked her if she knew the killers, did she see them, Lorene’s face would cloud with concern and she would ask, “Killed who? Did someone die?”

“Why yes, Miz Buchanan, Buck died. Remember, we talked about it,” the sheriff said with compassion. He looked quickly over at Jo Lynn Roundstep; then down at his big hands holding his gray Stetson; then back into Lorene’s confused and frightened eyes. He swallowed and asked softly, “Do you know who kilt Buck?”

The day Buck died, Jo Lynn had come out to the Buchanan place to look in on Lorene; her habit most weekdays. Lorene, whom Jo Lynn had known for years, had been a sounding board and crying shoulder to Jo Lynn through her trials, marriages, and divorces; and because of it, Jo Lynn had developed a great affection for Lorene. When Alzheimer’s began to take Lorene’s mind, Jo Lynn didn’t let the disease take their friendship.

Jo Lynn let herself in through the front door that day, and saw Lorene sitting in her oak rocking chair looking out the west side window of the living room toward the fields. Lorene was a tall, angular woman, and although large, never considered fat. Most, when describing her, referred to her as “big boned.”

“They killed him,” Lorene said flatly, and continued to stare out the window, rocking slowly.

Jo Lynn unloosened the large bulging leather handbag from her shoulder, and plopped it onto the sofa. She’d gotten used to wispy phrases coming out of Lorene’s mouth, and took them with a grain of salt.

“Killed who, Sugar?” she asked. She looked at the TV thinking Lorene’s current vision came from a soap opera, half-hoping maybe she could catch the last half of today’s
Young and Restless
. But the TV screen appeared black.

She looked out the window to where Lorene continued to solemnly stare. Across the yard and fence, out into the plowed field a hundred yards away, she saw Buck’s tractor sitting stopped with no one on board.

“Where’s Buck?” she asked, giving several nervous chomps on her stick of Doublemint, and craning to look back through the kitchen entry toward the back porch. A bit of uneasiness started to creep into her chest as she stepped closer to the window. She squinted to look out at the lone, parked tractor. A large lump lay on the ground behind the tractor’s implement, which didn’t seem natural for the surroundings. As her mind pushed through the veils of disbelief into the harsh light of comprehension, that bit of uneasiness flew into full-blown horror. Her hand flew to her opened mouth as she said, “Oh, my God!”

“They killed him,” Lorene said.

That’d been some four or so hours ago. The red sun sat half concealed by the top of the barn roof, as the county medical examiner’s black SUV led the silent ambulance down the gravel drive, and out onto the crumbling asphalt road in front of the Buchanan’s place.

Lorene looked back at Sheriff Bluehorse with disparagement. “Oh, Artie Lancaster, don’t be silly,” she said. “Buck’s not dead. He’s out working the fields where you oughta be. He just had breakfast not ten minutes ago. Land sakes.”

Sheriff Bluehorse, still dangling his Stetson in his hands, sighed and rose from the chair opposite the sofa where Jo Lynn sat next to Lorene. Artie Lancaster was Buck’s and Lorene’s nephew and sometimes hired hand; the sometimes being when he wasn’t on a toot or in jail, as was currently the case. Artie was Buck’s deceased sister’s only child. Buck had kept Artie on as a farm hand during those intervals when the county didn’t have the Iraqi War veteran picking up trash along the highway.

Jo Lynn held Lorene’s hand and looked at her friend with pity. Lorene had turned her head to look out the west window again, remaining silent.

“Well, Miz Roundstep,” Sheriff Bluehorse said with resignation. “If she says anything else about this, you know where to reach me. I ain’t got much to go on. I think Buck’s death was likely an accident.”

“Of course, Sheriff,” Jo Lynn said. She put her arm around Lorene’s shoulders and patted her gently as the sheriff headed for the front door.

“You know, they killed him,” Lorene called to the sheriff as she watched him leave.

So after a few years, like Buck’s fields, the case lay fallow, then overgrown with the weeds of time, and eventually almost forgotten.

As the steel door slammed behind him, Stanley “Goat” Griggs surveyed the two-lane asphalt road at the bottom of the small hill upon which he, and the prison walls behind him, stood. The road stretched two miles in either direction before it disappeared over a rise in one direction, and curved behind some trees in the other. In the hot morning sun, heat shimmered off the black road, but there were no vehicles. It didn’t appear anyone had come to give Goat a ride, not that he expected one.

Goat didn’t really think Squeaky would wait around for his release. This time she’d gotten out of prison two years ahead of him. Still, Goat thought it would’ve been kind of nice to see old Squeak, considering nothing conjugal had occurred between them during the eight years of his latest incarceration. Their first stretch, for farming five acres of marijuana in southeast Oklahoma, had landed each of them ten to fifteen years, of which they both only served ten. The second conviction they’d garnered after the authorities discovered a failed meth-making business after their mobile home lab blew up.

The trailer was located in an isolated rural area, and the pair had been returning with ingredients to make their product, when the explosion occurred. Fortunately for the couple, a Highway Patrol trooper stopped Goat for a broken headlight not more than three miles from their lab about five minutes before it exploded. The contents of their Walmart shopping bags, and the disposition of their residence, all proved to be pretty incriminating evidence. That, combined with their prior convictions, resulted in Goat getting sent up for another twenty years. Squeaky, however, received six to eight years after she cut a deal with the prosecutor.

The Angel and the Outlaw by Madeline Baker
Killer Plan by Leigh Russell
Maestra by L. S. Hilton
Beyond the Quiet Hills by Aaron McCarver
Getting Familiar with Your Demon: That Old Black Magic, Book 4 by Redford, Jodi
Ruthless Game (A Captivating Suspense Novel) by Danielle Girard
The Affair by Debra Kent
The Closer by Alan Mindell
When Breath Becomes Air by Paul Kalanithi
Spellbound Falls by Janet Chapman
Our partner