Read True to the Law Online

True to the Law 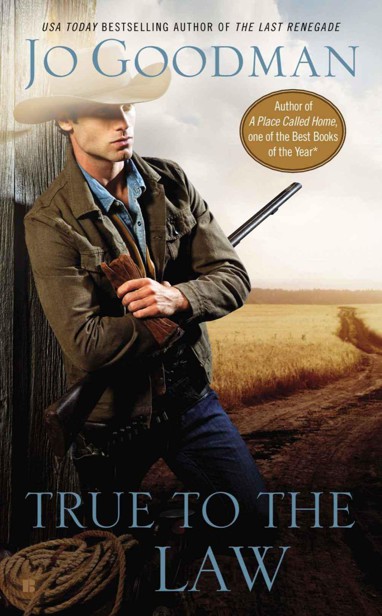 “Fans of Western romance will be thrilled with this delightful addition to Goodman’s strong list.”

“Humor and drama . . . A complicated, fast-paced, and deliciously believable story of love, sex, and secrets.”

“Exceptional across the board, a sheer delight.”

“Jo Goodman is a master storyteller and one of the reasons I love historical romance so much. . . .
The Last Renegade
is an outstanding historical Western.”

“A perfect read for fans of West Coast Old West . . . A romance to savor. Nicely done!”

“The cast of likable, articulate characters—including the complicated, independent, and altogether impressive heroine—makes this an entertaining and sizzling offering for lovers of Gilded Age pageantry.”

“Jo Goodman’s books are one of the main reasons why I love historical romance so much.”

“Business, money, lies, betrayal, and love are a dynamic recipe . . . Jo Goodman is a master at historical romance.
Kissing
Comfort
is charming, humorous, all-consuming, and a blast to read.”

“A wonderfully intense romance that entertained me from beginning to end . . . A captivating read.”

“Jo Goodman is one of my favorite authors and is one of the few historical romance writers that still sets her books in America . . . I absolutely adored her latest book,
Kissing Comfort
, where she has spun a gripping tale that absorbed me to the very end.”

PRAISE FOR THE NOVELS OF JO GOODMAN

“Exquisitely written. Rich in detail, the characters are passionately drawn . . . An excellent read.”

“Jo Goodman is a master of her craft, and it’s easy to see why she is a bestseller. She has the rare talent to put you in the hearts and minds of her characters . . . If you see her name on a book, it’s a guaranteed good read!”

“For the pure joy of reading a romance, this book comes close to being some kind of perfection.”

“Delightful and exciting . . . Goodman holds the suspense as well as the surprises and never lets up on the passion.”

“Goodman is a thoughtful and intelligent writer who can make her characters live and breathe on the page.”

TRUE TO THE LAW

True to the Law

TRUE TO THE LAW

Excerpt from
Nat Church and the Runaway Bride
by Jo Goodman

Berkley Sensation Books are published by The Berkley Publishing Group.

Special Excerpt from NAT CHURCH AND THE RUNAWAY BRIDE

In memory of my mother, whose gift was believing in her children, and in honor of my sister, a teacher, who believes in every one of hers.

Cobb Bridger gave no indication that he was inclined to accept or dismiss the job. Most men in his position would have taken this opportunity to ask a question, perhaps several questions. Cobb remained silent. In his experience, silence was a powerful motivator, and he judged that it would be a useful tool now.

Andrew Charles Mackey III stopped turning over the envelope in his hand and set it on the desk blotter. He laid his palm over it. “Is it the money? I was given to understand that what I’m offering is well in excess of your usual retainer. I’m aware there will be other expenses. We will settle those when you find her.”

Cobb said nothing. He tilted his head slightly to one side. His eyes narrowed a fraction. The look was a calculating one, thoughtful in the way one was when taking the full measure of a man. In Cobb’s case, it was also a sham. He was bone weary. Worse, he was bored. No amount of money was an incentive when he was bored. Besides that, he had taken Mackey’s measure at their introduction and distilled all the details to a single salient point: Here was a man with no expectation that he would be, or should be, challenged.

“I was told you would not ask questions,” said Mackey.

The hand over the envelope curled slightly. Mackey began to drum it lightly with his fingertips. “Then you’ll do it.”

“I don’t believe I’ve said I will.” Cobb’s eyes never left Mackey’s face. He heard rather than saw the drumming fingers miss several beats. After a brief pause, they resumed their tattoo. That’s when Cobb knew Andrew Mackey had made his decision.

“Miss Morrow has something that belongs to me. I want it back.”

Cobb detected a hesitation; something in Mackey’s speech suggested he was choosing his words carefully. Although he did not rouse himself to attention, Cobb Bridger was marginally less bored than he had been moments earlier.

“It is not just for me,” Mackey said after another hesitation. “The family also has an interest in recovering what she has stolen.”

Not
my
family, Cobb noted.
The
family. Cobb wondered if Mackey were aware that a distinction had been made. Probably not. One of the reasons Cobb had a reputation for asking so few questions was that he knew the answers to many of them before he scheduled the first meeting.

Andrew Charles Mackey III was still a bachelor at thirty. As Cobb himself was only one year younger and also unmarried, Mackey’s single state was not by itself very interesting. The fact that Mackey had been engaged three times and all of them ended abruptly, was. As far as Cobb was able to determine, Mackey had no bastards. An only child, his parents had died within months of each other when he was still at Princeton. More recently, in fact just two months ago, his only remaining grandparent, his paternal grandmother, passed away. The death of Charlotte Mackey left a not insignificant hole for the society pages to fill; yet that hole was nothing compared with the one left in the business pages.

The Mackey empire was in want of an . . . emperor? Empress?

Andrew Mackey’s failure to marry and produce any offspring, and the death of his parents and now the Mackey matriarch, did not, however, mean that he was without family. Cobb counted one uncle on the Mackey side and half a dozen Mackey cousins. Charlotte Mackey’s death meant there was a vacancy at the head of the family and an opportunity for someone to fill it.

It seemed that Andrew Mackey was speaking for the family. Cobb was uncertain if he had appointed himself to this front-and-center position or if he had been thrust there by the Mackey collective, and neither was he sure that it mattered. What piqued his curiosity was the missing item. What had Gertrude Morrow taken with her when she disappeared? What was important enough to Andrew Mackey, and ostensibly to the rest of the family, that hiring a private detective was a reasonable solution?

“This
something
that you allege Miss Morrow stole . . . is it bigger than my fist?”

Now Andrew Mackey frowned. “Miss Morrow took it. That is what is important. The size is of no consequence.”

Cobb wondered how that was possible. Mackey had given him a useful description of Miss Morrow, discussed at length her former position in the house and the access she had to every part of it, but especially the access she had to his grandmother, and finally, albeit without fanfare, shared the classified section of the newspaper he recently discovered in Miss Morrow’s former room—with seven advertisements for employment neatly removed from the pages. The newspaper, which he described as having been secreted away by Miss Morrow, had been found in a stack of similar papers bundled for removal. In Mackey’s mind this was further proof of Miss Morrow’s clever and concealing nature.

Cobb did not point out that a more clever and concealing woman would have burnt the paper, not left its discovery to chance. Mackey had a great deal to say about Miss Gertrude Morrow and nothing at all to say about what she took.

“The size,” said Cobb, “has some bearing on finding what’s been taken . . . and returning it to you.”

Andrew Mackey picked up the envelope and tapped one corner of it against the blotter. Before he spoke, his mouth thinned briefly. “You mistake the assignment, Mr. Bridger. I am not hiring you to find and return what’s been stolen. I don’t believe I ever said as much. For the matter of the theft to be resolved, you only have to find Miss Morrow. She is, you will note from my description, bigger than your fist.”

Cobb thought he probably deserved Mackey’s condescension. It did not make it more palatable, but it did stay the aforementioned fist from mashing Mackey’s patrician nose. “And when I find her?”

“You will inform me. I expect you will observe her until I can arrange a meeting. It is a precaution, nothing more, in the event she decides to disappear again. At all costs, you should prevent that.”

On the face of it, the job was straightforward. Cobb doubted that was the case. The point of hiring someone with his particular skills generally meant that the face of it was a façade.

All the better, else where was the challenge?

“Very well,” said Cobb, rising to his feet and extending his hand across the desk.

Mackey also stood. He offered Cobb the envelope, not his hand.

Cobb thought he correctly read the intent of the exchange in Mackey’s taut expression. No gentleman’s agreement here. This was business.

Cobb Bridger was fine with that.

Christmas Cookie Murder #6 by Meier, Leslie
Counted With the Stars by Connilyn Cossette
No-One Ever Has Sex on a Tuesday by Tracy Bloom
Surrender the Night by Tyndall, MaryLu
Finally a Bride by Lisa Childs
Heretic by Bernard Cornwell
Masters of Deception: The Gang That Ruled Cyberspace by Michele Slatalla, Michele Slatalla
El cromosoma Calcuta by Amitav Ghosh
La Familia 2 by Paradise Gomez
The Best Medicine by Elizabeth Hayley
Our partner