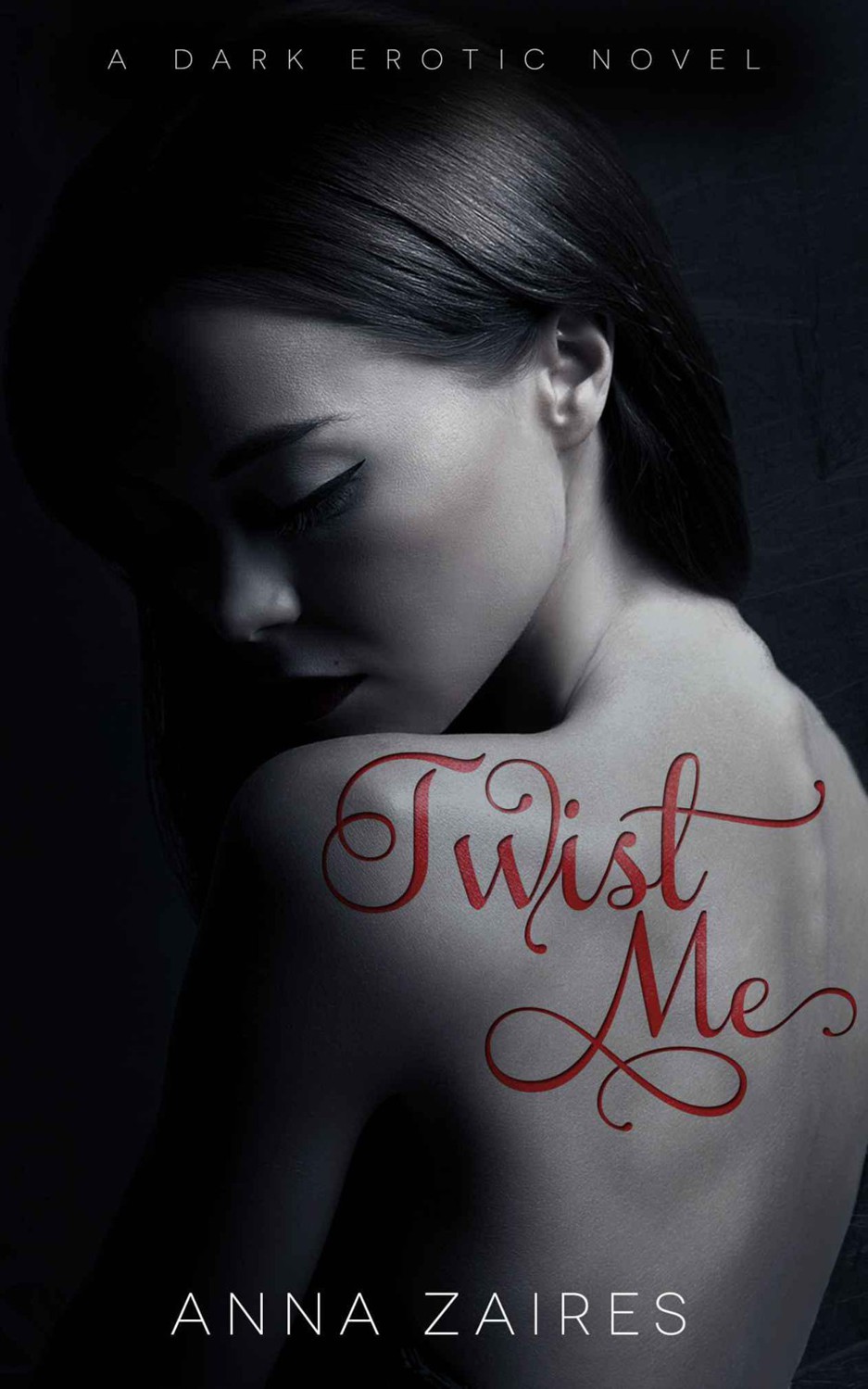 This is a work of fiction. Names, characters, places, and incidents are either the product of the author’s imagination or are used fictitiously, and any resemblance to actual persons, living or dead, business establishments, events, or locales is purely coincidental.

Except for use in a review, no part of this book may be reproduced, scanned, or distributed in any printed or electronic form without permission.

Published by Mozaika Publications, an imprint of Mozaika LLC.

Kidnapped. Taken to a private island.

I never thought this could happen to me. I never imagined one chance meeting on the eve of my eighteenth birthday could change my life so completely.

Now I belong to
him
. To Julian. To a man who is as ruthless as he is beautiful—a man whose touch makes me burn. A man whose tenderness I find more devastating than his cruelty.

My captor is an enigma. I don’t know who he is or why he took me. There is a darkness inside him—a darkness that scares me even as it draws me in.

My name is Nora Leston, and this is my story.

Warning
: This is NOT a traditional romance. It contains disturbing subject matter, including themes of questionable consent and Stockholm Syndrome, as well as graphic sexual content. This is a work of fiction intended for a mature, 18+ audience only. The author neither endorses nor condones this type of behavior.

It’s everywhere. The pool of dark red liquid on the floor is spreading, multiplying. It’s on my feet, my skin, my hair . . . I can taste it, smell it, feel it covering me. I’m drowning in blood, suffocating in it.

I want to scream, but I can’t draw in enough air. I want to move, but I’m restrained, tied in place, the ropes cutting into my skin as I struggle against them.

I can hear
her
screams, though. Inhuman shrieks of pain and agony that slice me open, leaving my mind as raw and mangled as her flesh.

He lifts the knife one last time, and the pool of blood turns into an ocean, the rip current sucking me in—

I wake up screaming his name, my sheets soaked through with cold sweat.

He will never come for me again.

I’m seventeen years old when I first meet him.

Seventeen and crazy about Jake.

“Nora, come on, this is boring,” Leah says as we sit on the bleachers watching the game. Football. Something I know nothing about, but pretend I love because that’s where I see him. Out there on that field, practicing every day.

I’m not the only girl watching Jake, of course. He’s the quarterback and the hottest guy on the planet—or at least in the Chicago suburb of Oak Lawn, Illinois.

Leah rolls her eyes. “Yeah, yeah. Just go talk to him already. You’re not shy. Why don’t you just make him notice you?”

I shrug. Jake and I don’t run in the same circles. He’s got cheerleaders climbing all over him, and I’ve been watching him long enough to know that he goes for tall blond girls, not short brunettes.

Besides, for now it’s kind of fun to just enjoy the attraction. And I know that’s what this feeling is. Lust. Hormones, pure and simple. I have no idea if I’ll like Jake as a person, but I certainly love how he looks without his shirt. Whenever he walks by, I feel my heart beating faster from excitement. I feel warm inside, and I want to squirm in my seat.

I also dream about him. Sexy dreams, sensual dreams, where he holds my hand, touches my face, kisses me. Our bodies touch, rub against each other. Our clothes come off.

I try to imagine what sex with Jake would be like.

Last year, when I was dating Rob, we nearly went all the way, but then I found out he slept with another girl at a party while drunk. He groveled profusely when I confronted him about it, but I couldn’t trust him again and we broke up. Now I’m much more careful about the guys I date, although I know not all of them are like Rob.

Jake might be, though. He’s just too popular not to be a player. Still, if there’s anybody I’d want to have my first time with, it’s definitely Jake.

“Let’s go out tonight,” Leah says. “Just us girls. We can go to Chicago, celebrate your birthday.”

“My birthday is not for another week,” I remind her, even though I know she’s got the date marked on her calendar.

I grin. She’s always so eager to party. “I don’t know. What if they throw us out again? Those IDs are just not that good—”

“We’ll go to another place. It doesn’t have to be Aristotle.”

Aristotle is by far the coolest club in the city. But Leah was right—there were others.

She’s dressed for clubbing—dark skinny jeans, a sparkly black tube-top, and over-the-knee high-heeled boots. Her blond hair is perfectly smooth and straight, falling down her back like a highlighted waterfall.

In contrast, I’m still wearing my sneakers. My clubbing shoes I hide in the backpack that I intend to leave in Leah’s car. A thick sweater hides the sexy top I’m wearing. No makeup and my long brown hair in a ponytail.

I leave the house like that to avoid any suspicion. I tell my parents I’m going to hang out with Leah at a friend’s house. My mom smiles and tells me to have fun.

Now that I’m almost eighteen, I don’t have a curfew anymore. Well, I probably do, but it’s not a formal one. As long as I come home before my parents start freaking out—or at least if I let them know where I am—it’s all good.

Once I get into Leah’s car, I begin my transformation.

Off goes the thick sweater, revealing the slinky tank-top I have on underneath. I wore a push-up bra to maximize my somewhat-undersized assets. The bra straps are cleverly designed to look cute, so I’m not embarrassed to have them show. I don’t have cool boots like Leah’s, but I did manage to sneak out my nicest pair of black heels. They add about four inches to my height. I need every single one of those inches, so I put on the shoes.

Next, I pull out my makeup bag and pull down the windshield visor, so I can get access to the mirror.

Familiar features stare back at me. Large brown eyes and clearly defined black eyebrows dominate my small face. Rob once told me that I look exotic, and I can kind of see that. Even though I’m only a quarter Latino, my skin always looks lightly tanned and my eyelashes are unusually long. Fake lashes, Leah calls them, but they’re entirely real.

I don’t have a problem with my looks, although I often wish I were taller. It’s those Mexican genes of mine. My abuela was petite and so am I, even though both of my parents are of average height. I wouldn’t care, except Jake likes tall girls. I don’t think he even sees me in the hallway; I’m literally below his eye level.

Sighing, I put on lip gloss and some eye shadow. I don’t go crazy with makeup because simple works best on me.

Leah cranks up the radio, and the latest pop songs fill the car. I grin and start singing along with Rihanna. Leah joins me, and now we’re both belting out S&M lyrics.

Before I know it, we arrive at the club.

We walk in like we own the place. Leah gives the bouncer a big smile, and we flash our IDs. They let us through, no problem.

We’ve never been to this club before. It’s in an older, slightly rundown part of downtown Chicago.

“How did you find this place?” I yell at Leah, shouting to be heard above the music.

“Ralph told me about it,” she yells back, and I roll my eyes.

Ralph is Leah’s ex-boyfriend. They broke up when he started acting weird, but they still talk for some reason. I think he’s into drugs or something these days. I’m not sure, and Leah won’t tell me out of some misplaced loyalty to him. He’s the king of shady, and the fact that we’re here on his recommendation is not super-comforting.

But whatever. Sure, the area outside is not the best, but the music is good and the crowd is a nice mix of people.

We’re here to party, and that’s exactly what we do for the next hour. Leah gets a couple of guys to buy us shots. We don’t have more than one drink each. Leah—because she has to drive us home. And me—because I don’t metabolize alcohol well. We may be young, but we’re not stupid.

After the shots, we dance. The two guys who bought us drinks dance with us, but we gradually migrate away from them. They’re not that cute. Leah finds a group of college-age hotties, and we sidle up to them. She strikes up a conversation with one of them, and I smile, watching her in action. She’s good at this flirting business.

In the meantime, my bladder tells me I need to visit the ladies’ room. So I leave them and go.

On my way back, I ask the bartender for a glass of water. I am thirsty after all the dancing.

He gives it to me, and I greedily gulp it down. When I’m done, I put down the glass and look up.

Straight into a pair of piercing blue eyes.

He’s sitting on the other side of the bar, about ten feet away. And he’s staring at me.

I stare back. I can’t help it. He’s probably the most handsome man I’ve ever seen.

His hair is dark and curls slightly. His face is hard and masculine, each feature perfectly symmetrical. Straight dark eyebrows over those strikingly pale eyes. A mouth that could belong to a fallen angel.

I suddenly feel warm as I imagine that mouth touching my skin, my lips. If I were prone to blushing, I would’ve been beet-red.

He gets up and walks toward me, still holding me with his gaze. He walks leisurely. Calmly. He’s completely sure of himself. And why not? He’s gorgeous, and he knows it.

As he approaches, I realize that he’s a large man. Tall and well built. I don’t know how old he is, but I’m guessing he’s closer to thirty than twenty. A man, not a boy.

He stands next to me, and I have to remember to breathe.

“What’s your name?” he asks softly. His voice somehow carries above the music, its deeper notes audible even in this noisy environment.

“Nora,” I say quietly, looking up at him. I am absolutely mesmerized, and I’m pretty sure he knows it.

He smiles. His sensuous lips part, revealing even white teeth. “Nora. I like that.”

He doesn’t introduce himself, so I gather my courage and ask, “What’s your name?”

“You can call me Julian,” he says, and I watch his lips moving. I’ve never been so fascinated by a man’s mouth before.

His expression darkens. “Don’t lie to me.”

“Almost eighteen,” I admit reluctantly. I hope he doesn’t tell the bartender and get me kicked out of here.

He nods, like I confirmed his suspicions. And then he raises his hand and touches my face. Lightly, gently. His thumb rubs against my lower lip, as though he’s curious about its texture.