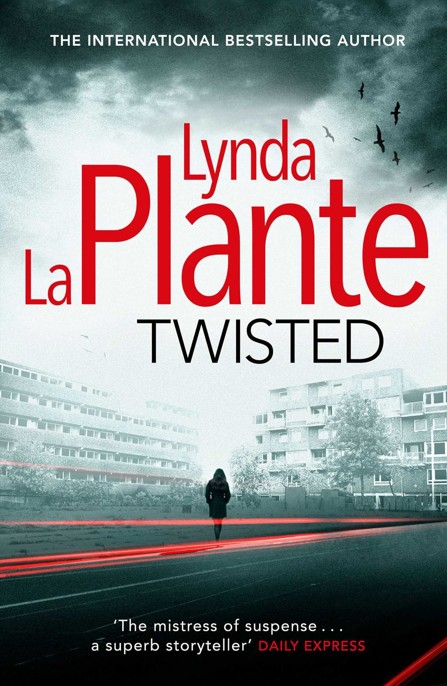 The right of Lynda La Plante to be identified as author of this work has been asserted in accordance with sections 77 and 78 of the Copyright, Designs and Patents Act, 1988.

This novel is for a caring, dedicated doctor, a wonderful husband and father. His three sons and five grandchildren will always remember his generous, loving spirit and wonderful humour.

My last memory is seeing him surrounded by his beloved family in his new panama hat. My proud, brave brother, Michael Reid Titchmarsh, may you rest in peace.

Twisted
was a difficult journey and one that required in-depth research from psychologists, who guided me through the various medical issues. My thanks and respect to the doctors and specialists who gave me their time and expertise. To Gillian Gordon for lending me volumes of medical journals and for giving me great insight into the specific medical conditions depicted in the novel. I would also like to express my sincere thanks to Callum Sutherland for his constant support and research, both in the police procedures and the editing. He is such a dedicated man with a genuine, thorough patience and an ability to ensure that I get the facts correct. I have been fortunate to have Susan Opie again to do the final edit, and as always I thank her for her enthusiasm and brilliant notes and suggestions.

I have a terrific team at Simon & Schuster, and would like to thank in particular Suzanne Baboneau and Ian Chapman; James Horobin and his amazing sales team; Dawn Burnett and Jamie Groves for marketing; Simon & Schuster International sales team, all my friends at S&S Australia; Jonathan Ball in South Africa; Simon and Gill Hess in Ireland – I look forward to seeing you all soon. My gratitude to all other departments, who work so hard to design my book jackets and produce the finished books.

Thank you to my dear literary agent, Gill Coleridge, who has guided and advised my career for so many years, and to Cara Jones of RCW; and to Stephen Ross, Dan Ross and Andrew Bennet-Smith at Ross, Bennet-Smith for their support and financial guidance.

I also want to express my sincere thanks to Nigel Stoneman, who has guided all the publicity and promotions for my novels for many years. Nigel’s constant support, enthusiasm and generous spirit makes life on the road a pleasure. Also, thanks to Tory Macdonald who is my personal assistant and a jewel I am fortunate to have beside me.

I
t was the first dinner party Lena Fulford had agreed to attend since the separation from her husband. She was eager to show off her new image, although she couldn’t help a shiver of trepidation at being on her own. She had chosen to wear a new, and very expensive, figure-hugging Ralph Lauren white cocktail dress. Her thick blonde shoulder-length hair was loose and she’d made sure her makeup was perfect by going to the beauty salon that afternoon. She had decided to take herself to the dinner party, and she felt more in control by doing so. However, she began to doubt her decision as there was not a parking space to be found on Richmond Hill. After having to go past her host’s house twice, in frustration she decided to leave her car in the guests’ area at the Richmond Hill Hotel. From there she walked to the Berkoffs’ house, which was midway up the hill. Nervously she clutched her small white bag and flushed with embarrassment when the hostess opened the front door and shrieked.

‘Oh my goodness, JUST look at you!’ Maria Berkoff was her usual theatrical self.

She was a large overweight woman, which was accentuated by her tight red evening dress. But her hair was well-coiffed, and she wore chandelier drop earrings along with a multitude of pearl necklaces.

‘Lena, you look absolutely stunning, darling, and you seem taller than I remember. I might need a divorce so I can get to slim down and look so good – you must have lost pounds.’

‘Marcus and I are not divorced quite yet, and I think the weight loss is down to all the stress.’ Lena gave a small smile.

‘Oh how awful, but I thought it was all very amicable?’

‘It is, but I have been so busy organizing a new children’s themed party business, designing toys and—’

‘Really,’ an uninterested Maria said as she turned away.

‘I’ve called it Kiddy Winks. It’s been exhausting having to deal with all the hire of new staff and—’

‘The Middletons have had the most fantastic success running just the same sort of thing, so I’m certain yours will be strong competition. Now come and have a glass of champagne and let me introduce you to everyone. I think you have met most of them before at some time or other.’

Lena followed Maria into a large glass conservatory, where numerous well-heeled guests were gathered. Maria’s portly and effusive husband Sasha hurried to hand her a drink.

‘How lovely to see you, Lena! We do miss old Marcus, he was always the life and soul of our little events. How is the old chap doing?’

‘He was very well the last time I spoke with him,’ Lena assured him.

‘Good, and what about that daughter of yours – Angie, is it?’

‘Jolly good, now let me introduce you to a very dear friend – he used to play squash with your husband, thrashed him regularly.’

Lena found it all completely excruciating, even more so as everyone was eager to know how Marcus was doing and repeatedly told her how much he was missed. Although she had met most of the Berkoffs’ guests before she had always been accompanied by her husband on such occasions. Now she had to endure being the focus of everyone’s attention simply because she was single. At dinner Lena found herself seated next to a much younger man and had to put up with Maria, always delighted with an excuse to gossip, giggling that perhaps her glamorous looks were down to her finding a ‘toy boy’.

Lena was infuriated and said curtly that she had no interest in forming any new relationship.

‘My latest business is my priority right now,’ she added.

‘Just teasing, darling, you are such a clever lady and very successful,’ Maria said as dinner was served.

For Lena it was three courses of substandard tasteless offerings, made worse by having to listen to one guest after another recalling previous evenings when Marcus had held court. He was a great storyteller, often with self-deprecating anecdotes about himself and his failed business ventures. The fact that Lena had invariably financed his thwarted attempts at success was never acknowledged. Being attractive, and somewhat vain, Marcus always relished the attention, and would have enjoyed listening to everyone repeating how much he was missed.

‘So will you be staying on in that gorgeous house?’ Maria asked.

‘I’m not sure, we haven’t discussed or finalized anything as yet.’

‘So where is that ex of yours living?’ Sasha asked, pouring himself some wine, and then proffering the bottle to Lena for a refill.

‘He has rented a flat in Mayfair from a friend who is abroad,’ she said and placed her hand politely over her wine glass. ‘I’m driving so I will just stick to water thank you, Sasha.’

‘Mayfair! Well do pass on our warmest regards, and email us his address. He never answers his mobile or the messages I leave him, and Maria and I would love to see him.’

‘I think he has a new number, and I’ll remind him to call you,’ Lena managed to promise politely.

At the earliest opportunity after coffee and mints, she excused herself, saying that she had a business meeting scheduled for early the next morning.

‘What, on a Sunday?’ Maria demanded loudly.

Lena flushed and explained that due to the success of Kiddy Winks she needed every spare moment to deal with the ever growing sales and orders for more stock. The by now rather drunk Sasha guided her to the front door, his sweating hand clasping her elbow and moving to her waist as his flushed face came too close.

‘Perhaps we could have dinner one evening,’ he suggested, leering. ‘You know Maria and I have a sort of open thing and I’d like to get to know you on a more personal level.’

She moved away from him, and reached to open the door herself, but he was persistent.

‘How are you fixed for next week? There’s a new restaurant opened in Chiswick. I think Maria saw Marcus there one night.’

She gave him an icy stare, refusing to even contemplate answering. He opened the front door wider as she edged past him without saying a word. As she walked down the short path and headed back to where she had parked, she was horribly aware that he was standing there watching her. It had been a really hideous evening and one she would not consider repeating. She had been separated from Marcus for two years, yet tonight for some reason it felt as if it had only just happened. She had refused many other invitations to parties and dinners, but badgered by Maria she felt forced to attend this one, even though she knew full well the Berkoffs were really Marcus’s friends, as were most of the people seated round the dinner table.

It took a while for her to ease the car out of the parking space, moving backwards and forwards and becoming even more agitated as the hotel car park was by now full for a big function. Why had she agreed to go? She’d known what it was going to be like. By the time she had succeeded in manoeuvring out of the tight space she had answered herself. She had wanted to prove that she could do it. She also wanted to tell everyone about how successful Kiddy Winks was becoming. This latest business venture had been a major part in getting her life back in order, and then deciding that if she could make the business work then she could also do something about herself. The marriage had been very strained for some time before the separation, and she had allowed herself to overeat and had spent days in an old tracksuit. She had not bothered with hair or makeup, her skin had erupted in patches, and the depression that had dominated her life was only relieved by her determination to make a success of Kiddy Winks. But now she’d lost the extra weight and was back to size twelve.