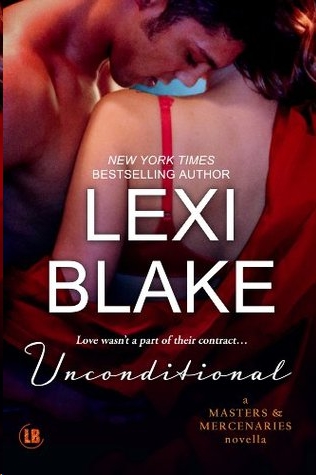 Unconditional: A Masters and Mercenaries Novella

Unconditional: A Masters and Mercenaries Novella

An excerpt from Dungeon Royale by Lexi Blake

Ashley Paxon took the seat the big bad Dom offered her and wondered if she was about to get fired. Or maybe murdered. She wouldn’t put anything past Ian Taggart. Oh, her sister said the massive hunk of man was really just a teddy bear on the inside, but Ashley wasn’t buying it. This particular teddy bear had claws and fangs. The owner of Sanctum was gorgeous and—if rumors were true—deadly.

God, she wished Ryan and her sister weren’t on their honeymoon.

“Are you trying to win the quiet game?” Ian asked, a quizzical look on his face.

Jeez. How long had she been sitting there staring at him? Sometimes she lost track of time. And she’d been known to fall asleep with her eyes wide open on occasion. It just happened. Her daughter was cutting a molar and she didn’t have a husband to share the load, so sleep was sometimes a hard-fought battle. “I…I…no.”

Taggart’s blue eyes were like lasers pinning her to her chair. “Because if you are, you just lost.”

She wanted to look around for the cameras. Maybe this was one of those surreal TV shows. Or maybe the guy was toying with her the same way a lion batted around a little mouse before he crunched down and made a light snack of it. “Are you going to fire me?”

If he was, she would rather just get it over with. She’d taken the job waitressing in the bar at Sanctum because it paid well and only required her to work three nights a week. On Thursdays, Fridays, and Saturdays, her baby girl, Emily, stayed with her brother-in-law’s mother at Ryan and Jill’s new house. It was the perfect setup because Ashley lived in their guesthouse, so it was easy. Helen Church had become her baby girl’s grandma. It was a damn good thing because Ashley’s own mother was dead and Emily’s dad was so not in the picture.

“Why would I fire you?” Ian’s blue eyes narrowed and he leaned forward, a menacing look on his face. “Have you been doing something wrong?”

She felt like he was looking through her, like there was no skin to hide behind and he could see down to the depths of her soul. Suddenly she believed all the rumors about this man. He had very likely worked for the CIA, and she was certain he’d been damn good at his job. He probably wasn’t into the Geneva Convention protocols for dealing with prisoners, either. “No. I mean, not really. I was ten minutes late last Friday. I’m so sorry. I got caught in traffic on 75. It was a complete mess. I also ate three…no, five. I ate five maraschino cherries. I’m a little addicted to them. I can pay for them. You could just take the whole jar out of my pay.”

She knew she shouldn’t sneak them, but they were so tempting.

“What are you doing?” The door behind her opened and a tall, well-built woman with strawberry blonde hair entered, her eyes on Ian Taggart. “Are you trying to scare the crap out of the subs again?”

Charlotte Taggart gave her husband a stare that would peel paint off a wall, but he just smiled her way, a slow, sexy curling of his lips.

“She’s so easy to scare, baby. I couldn’t resist. Come.” He moved his big chair back, patting his legs.

Charlotte rolled her eyes but placed herself squarely on his lap, her arms going around her husband’s neck as she kissed him lightly. “You’re mean.”

She wasn’t sexy. She didn’t even really believe that sex was all it was cracked up to be. She’d had exactly one serious boyfriend and he’d knocked her up and then promptly disappeared, leaving her alone until her daughter had been born.

Sex was just a biological function. The whole orgasm thing was mostly a myth. Or maybe she just wasn’t that type of girl.

But damn, her heart skipped a beat when she saw the way the Doms of Sanctum treated their subs.

Charlotte finished kissing her husband, but she didn’t move out of his lap. As far as Ashley could tell, if those two were in a room together, they were connected. They were holding hands or he pulled her into his lap. When they sat in the bar, Charlotte usually lounged on one of the oversized, luxurious pillows on the floor, her head in Ian’s lap as he talked with his friends.

Yeah, she might not want to hop back into the sexual pool, but she damn sure missed affection.

Although how could she miss something she’d never really had?

“So, Mr. Evil is going to stop torturing you and tell you about our plan,” Charlotte explained.

Dear god, that scared her even more. “There’s a plan?”

Ian’s lips quirked up. “It’s more a favor I’m going to ask of you. Would you do a favor for me, Ashley? In exchange for a whole jar of maraschino cherries.”

It was kind of, sort of phrased as a question, but there was an underlying meaning behind those words. Sanctum was his club. She was his employee. He wasn’t the polite type to ask kindly. She was pretty sure that if his wife hadn’t walked in, he would have just told her what to do. “I suppose I could try. Do you need me to work an extra shift?”

“No, but I do need you to take on an extra duty. You know I’ve got a couple of new Doms applying for Master rights here.”

Everyone was talking about the new guys. A big gorgeous Brit had shown up about three weeks before. He’d been walking the dungeon at night, leaning heavily on a cane, obviously recovering from some sort of injury. Jesse Murdoch had been studying, trying to pass the courses Taggart insisted every Dom in his club passed.

“Yes, I’ve talked to Jesse a couple of times, and the other one seems nice enough.”

Ian snorted. “Are you talking about Damon? Nice? Sweetheart, Damon is a raving, raging murder machine right now, and you should stay far away from him.”

She should probably stay away from everyone because she had terrible taste in men. Her last boyfriend had merely been a douchebag with both commitment and mommy issues. She wasn’t ready to move on to murder machine, though she’d been voted “Girl Most Likely to Pick up a Serial Killer” by some goofballs in high school. She’d lost “Girl Most Likely to Get Knocked Up” to Britney Kraig. Britney was still single and had a belly she could bounce a quarter off of, so she’d shown them. “All right. I’ll watch out for him. Should I mace him if I get the chance?”

“I’d pay to see that,” Ian said. “Seriously, I’ll pay you. It would be so worthwhile to see the look on his face.”

Charlotte sighed. “Damon got shot by his bestie. He’s not handling it well. He’s not going to tear up the club.”

“Unless Baz shows up. Then all bets are off,” Ian countered. “And I’m not talking about Jesse, either. I’m fairly comfortable with him. I’m talking about your brother-in-law’s friend.”

“Keith?” She’d met Keith a couple of times. He’d been at Ryan and Jill’s wedding. He’d been the best man and she’d been the maid of honor. She could still remember how he’d offered her his arm before they walked down the aisle. Keith was a tall, broadly built man with golden brown hair and a smile that transformed his naturally sober face into something beautiful.

He’d escorted her down the aisle and then utterly ignored her. He was some sort of ridiculously wealthy investor guy. She was a girl who cheered when her bank account had more than a hundred bucks in it.

“Yes. Keith has moved back to Dallas and he wants to come to Sanctum. I know Ryan says he’s a well-trained Dominant, but I don’t give out Master rights like candy. I need to see it, which means he needs a sub.”

She shook her head because there was some kind of mistake. She wondered if Jill had told them a lie to get her the job. “I’m not a sub.”

Both Charlotte and Ian snickered a little.

Ashley immediately looked away.
Damn it.
That didn’t mean a thing. It just meant Ian Taggart was a scary guy. She forced her eyes to meet his. “I’m not a submissive. I hope that doesn’t mean I can’t work here anymore, but the truth of the matter is I’m just here for the job. I don’t…I don’t do the sex stuff.”

Taggart snorted a little. Somehow he made it sound regal. “You don’t do the sex stuff? Don’t you have a kid?”

He had a point. “Fine. I don’t do that kind of thing anymore.”

“You don’t fuck anymore?” Taggart asked. “Look, just the fact that you called it ‘sex stuff’ makes me want to help you out.”

Ian stared at his wife. “You’re never having babies.”

Charlotte frowned Ashley’s way. “Don’t talk like that in front of him. He’s scared of tiny humans.”

“You ran away from Carys last night.”

“That’s because I’m scared of poop, not tiny humans. Although tiny humans make an enormous amount of shit. And then they play in it. It’s horrifying. If we have a kid, it can’t poop.”

“I’m going to work on that, babe.” She turned back to Ashley. “This isn’t about sex. D/s doesn’t have to be about sex. It can be about figuring out who you are, and if you honestly believe you aren’t submissive, then maybe you should be talking to Eve and not Ian.”

“I don’t see how you think I’m a sub.” Eve was the resident shrink. Ashley didn’t think she really needed a professional.

Charlotte hopped off her husband’s lap and walked around the desk. She leaned on it, looking down at Ashley. “Honey, you do everything anyone asks of you. Just the other day Adam asked for Dos Equis and the bar didn’t have it, and you went out on your own and found it.”

She didn’t like to disappoint people. “It didn’t take me too long.”

She’d had to drive three miles in terrible traffic and it took two stops to find the correct beer. But that was her job, right? It wasn’t like she just always did what people asked of her. She had a sarcastic sense of humor. That meant she was all independent and sassy. A sub couldn’t be those things.

“You should have told him no. Adam is a pussy. He’ll take anything you give him,” Ian replied. “But Charlie is right. Tell me how many times in a day you give up the things you want and need because someone asked you for something. It doesn’t even have to be something important. You never want to say no. You never want to let anyone down. You struggle to even say no to people you don’t like.”