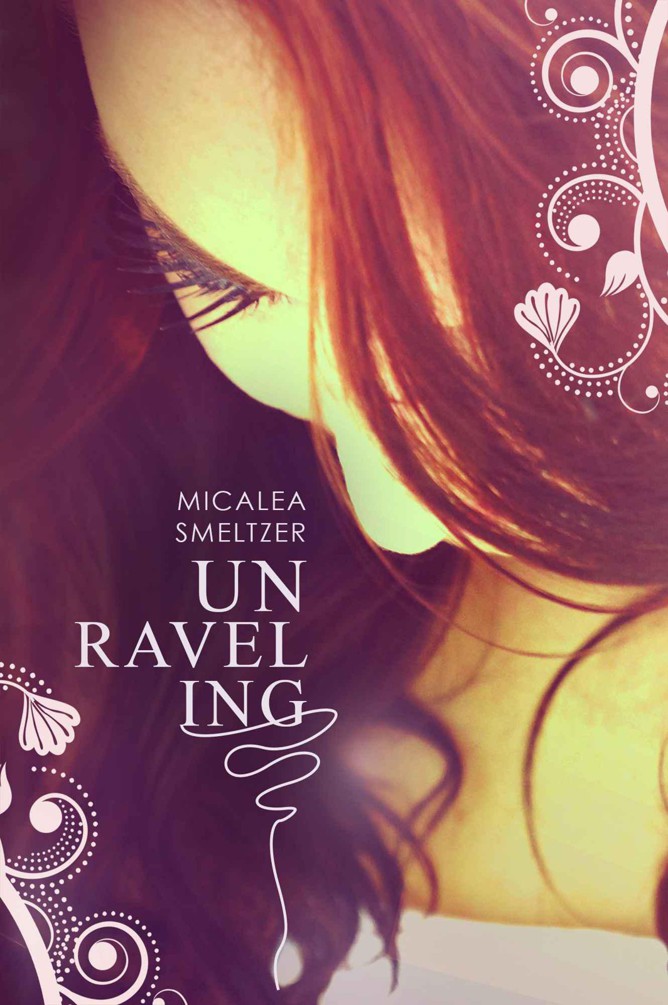 To free from complication or difficulty; make plain or clear; solve

Cover Art designed by Regina
Wamba of Mae I Design

The club pulsed around me,
the music soaking into my bones and vibrating my muscles. I closed my eyes and shimmied my body to the beat of the music. It felt so good to just… let go and be free for one night.

Sweat dampened my skin
, but I didn’t mind. It reminded me that I was alive. It had been a long time since I just let loose. Sometimes, I forgot to be a normal nineteen year old.

Large hands slid around my waist and squeezed.
I leaned back, expecting to encounter a slightly pudgy body, but instead I felt like I was resting against a brick wall.

My heart rate spiked and my eyes darted open as the guy grinded behind me.

I jerked myself away and turned around.

The guy behind me was definitely not my best friend, Rollo.

He smirked at me, not at all ashamed of his actions. He was average height but wide with
big hulking muscles. Basically, he was built like a tank.

“What’s wrong
, baby girl?” he waggled his eyebrows. “I was just dancin’ witu.” His voice slurred from alcohol and his eyes were clouded.

“Don’t touch me,” I said
, with as much conviction as I could muster, but my voice still wavered.

My eyes darted around the packed club looking for Rollo. I felt cornered. My therapist said it was very important to remove myself from situations where I felt that way.

The guy reached out and grabbed my arm. “I just wanna dance.”

“Let me go,” I tried to pull away but he was too strong.

It was too much like that night two years ago.

“Just one dance, purdy gurl,” he slurred and pulled me to him.

My heart thundered in my chest. Rollo. Where was Rollo?

“Let her go,” commanded a new voice. One that I knew was not Rollo.

“Back off buddy, she’s mine,” said the guy that was gripping me. He was squeezing my arm
, hard enough to bruise. I could feel a full-blown panic attack coming on, and it wouldn’t be pretty when it hit.

I turned as far as his gr
ip would allow, and saw my savior.

He was tall, six foot two maybe, with short dark hair. With the pulsating lights of the club I couldn’t decide if it was black or brown.
And his body? Oh, it was sinful, especially with the slight sheen of sweat covering him. His shirt clung to his muscled chest and his jaw twitched with tension. I couldn’t make out his eye color but I was sure it was just as beautiful as the rest of him. His perfectly sculpted lips were turned down in a frown, but I was sure they could perform all kinds of deliciously wicked things. His fists clenched and unclenched at his sides.

I wanted to slap myself.
Deliciously wicked things? Had I completely forgotten what had happened to me? Had my common sense taken a hike?

“Or what?” the guy holding me sneered.

Before I knew what was happening my savior struck out, his tanned arm flying right past me, to strike the guy’s nose. Blood spurted on
me and the floor. Finally, the guy released me.

“You broke my nose!” he cried in a thick voice. “What the fuck’s
your problem?”

“My problem is sicko’s like you,” the
guy that rescued me sneered venomously, as he pointed an elegant finger at the bleeding man. He turned to me. “Are you okay?”

“Yeah,” I breathed and rubbed my arm where the guy had gripped me.
Yep, definitely going to bruise.

“Do you need a ride home?” he asked. His voice was deep and seductive
, its cadence vibrating through my body.

“My friend is supposed to be around here somewhere?” I said
, but it came out as a question instead.

“I’ll help you find her,” he took my hand gently so we didn’t get separated in the crowd. His
hand was large and warm, but covered in callouses.

I resisted the urge to pull away. All I had ever done since
‘that night’ was pull away, but my hand still twitched in his, a jerky motion of escape. He squeezed it in a reassuring manner; he probably thought that it was shock making me so jumpy.

“No, no, just my friend. He’s gay,” I added like I needed an explanation. I scanned the writhing bodies for his curly blonde Afro. If anyone thought white kids couldn’t have Afros they were wrong. Striving for anything to say I asked, “Is your hand hurt?”

“No,” he smiled. “It’s going to take a lot more than some loser’s nose to hurt my hand.”

“Oh,” I said. My hand twitched again as it tried to escape the confines of his larger one.

My sexy savior led me around the perimeter of the club. My hand
began to tingle where he held it and I finally stopped trying to pull away. After two years of running from every male except Rollo, the sensation was strange. I couldn’t decide if it was good or bad and whether or not I liked it.

Maybe, after two years, I was finally coming out of the funk I’d been incased in.

“What does your friend look like?” he had to bend down to my ear to ask, in order to be heard over the music.

The closeness of his face to mine startled me; making me
jump. I was like a frightened bird, always ready to take flight and flee at a moment’s notice.

“Short with a curly blond
e afro,” I yelled.

My savior
quirked his lips. “Can’t be hard to miss then?”

We were on our second lap of the club when Rollo came running up to me.

“Ohmigawd! Katy! Did you hear? Some guy just punched this other guy because he was groping on some girl! Apparently he broke his nose!” Noticing my sheepish glance at the guy beside me Rollo’s mouth popped open. “Oh gawd, it was you, wasn’t it?”

“She told him to stop.” He let go of my hand and crossed his arms over his lean chest. “He didn’t listen.”

I missed the feel of his hand in mine
, which was strange. Ever since that night, I didn’t like to be touched by anyone. I must be in some alternate universe. Either that, or aliens had taken over my body. I never even talked to strangers, let alone let them hold my hand.

“
Ohmigawd! Katy, are you okay? I should’ve been there! I know you haven’t been the same since-”

I waved my hand in an effort to shut him up.
My sexy rescuer didn’t need to know my business. No one did. Everyone already thought I was weird and a freak, I’d prefer to keep my savior in the dark.

“Come on
, I’ll take you home baby cakes,” Rollo slung his arm over my shoulders.

I turned back to
my savior. “Thanks for… rescuing me… I guess.”

His lips quirked in a quick smile.
“You guess?”

“No problem,” he melted back into the crowd.

“I didn’t even get his name,” I sulked as we reached the street.

Now, I was sulking? Since when did I care what a guy’s name was? Had Rollo slipped something into my drink, turning me into a hormonal mess?

Rollo led me down the street and to my
silver Cadillac CTS Coupe. It was a beautiful car but way too much in my opinion. I would’ve been happy with a Hyundai or a Kia but my mom wouldn’t hear of it. At least, she let me pick the color. I unlocked it and he climbed in the passenger side.

I turned the car on and headed towards campus to drop off Rollo. My mother had insisted that I have an off campus condo, that was something I’d been happy to let her do. Sleeping in a dorm room, with a stranger, definitely wouldn’t have been good for me, and my state of my mind.

I shrugged. “It’s not like he’d be interested in me. A guy like that needs a model on his arm.
Besides, you know me,” I sighed. “I can’t get close to anyone.”

Rollo sighed
, which meant a lengthy speech was headed my way.

“Katy you are a gorgeous girl. I know that after what happened to you, you don’t see yourself that way
, but you are. You’re beautiful and you deserve to be happy just as much as the next person. You have got to stop being so negative on yourself. Live a little,” he poked my arm.

“I don’t know if I can,” I said softly, my voice barely above a whisper.

“You can! You just get out there! Say hi to the cute guy behind you in the grocery store! Go out for a night of fun!”

I stopped him right there. “I did go out for a night of fun, tonight, and it ended up with me being groped. You know how I feel about being touched,” I snapped. “And where were you! You left me alone!”

I left out the part where I actually enjoyed being touched by my savior. Rollo would have had a field day with that news.

Rollo gaped like a fish. “I found a guy and we were having a drink. Besides, you were holding that guy’s hand. So much for your no touching policy.” He waggled his finger at me.

“This is why I don’t go out, Rollo. You deserve to have fun and meet a guy. You shouldn’t have to hang out with me all night
, just in case some guy gets too cozy. And as for my no touching rule-” I fumbled for an excuse but came up with nothing.

Just because I felt safe with the stranger
didn’t mean I was going to just suddenly let my past go and act like a carefree college student. I wouldn’t. No, I couldn’t.

Rollo looked at me and sadness filled his
blue eyes. He shook his head. “I should’ve been with you. After all, you finally agreed to come out clubbing with me.”

“Let’s just call a truce
.” I hated arguing with Rollo. He was the only person in my life that mattered. The only one I had left.

He smiled. “Deal,” he said
, just as I parked in the student parking lot. “I’m sorry I snapped at you for holding that guy’s hand. I shouldn’t have done that. You haven’t even looked at a guy since-”

I held up my hand to cut him off. “I really don’t know what got into me.”

“Girlie,” Rollo took my hand, “you’ve got to move on sometime and live your life. You can’t let him win. You just can’t.”

I felt like,
I know
and,
I’m fine
, were my answers to everything.

“Bes
ides, that dude was total deliciousness. Think I can convert him to my team?”

“I doubt it,” I laughed. Rollo was the only person that could make me
laugh anymore. I used to be fun and carefree, now I was shy and scared of my own shadow.