Read Upon A Pale Horse Online

Upon A Pale Horse 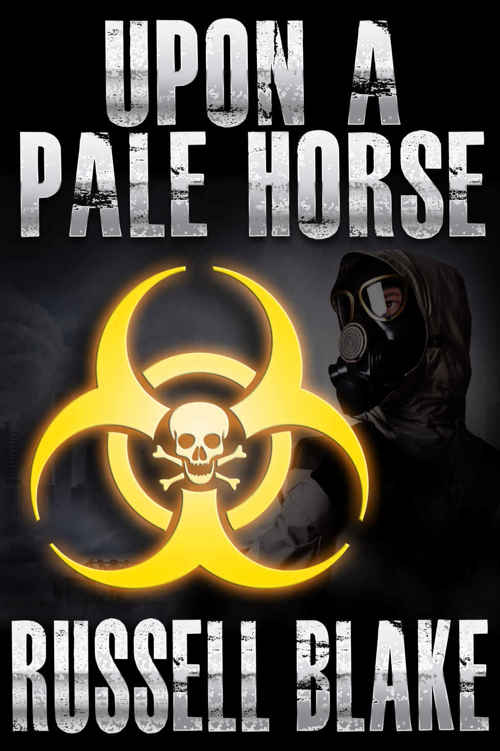 Upon a Pale Horse

Copyright 2013 by Russell Blake. All rights reserved. No part of this book may be used, reproduced or transmitted in any form or by any means, electronic or mechanical, including photocopying, recording, or by any information storage or retrieval system, without the written permission of the publisher, except where permitted by law, or in the case of brief quotations embodied in critical articles and reviews. For information, contact:

THE EYE OF HEAVEN

UPON A PALE HORSE

NIGHT OF THE ASSASSIN

RETURN OF THE ASSASSIN

REVENGE OF THE ASSASSIN

BLOOD OF THE ASSASSIN

REQUIEM FOR THE ASSASSIN

BLACK IS THE NEW BLACK

AN ANGEL WITH FUR

HOW TO SELL A GAZILLION EBOOKS

(while drunk, high or incarcerated)

Non-fiction includes the international bestseller
An Angel With Fur
(animal biography) and
How To Sell A Gazillion eBooks In No Time
(even if drunk, high or incarcerated), a parody of all things writing-related.

Blake is co-author of
The Eye of Heaven
and
The Solomon Curse
, with legendary author Clive Cussler. Blake’s novel
King of Swords
has been translated into German by Amazon Crossing,
The Voynich Cypher
into Bulgarian, and his JET novels into Spanish, German, and Czech.

Blake writes under the moniker R.E. Blake in the NA/YA/Contemporary Romance genres. Novels include
Less Than Nothing
,
More Than Anything
, and
Best Of Everything
.

Having resided in Mexico for a dozen years, Blake enjoys his dogs, fishing, boating, tequila and writing, while battling world domination by clowns. His thoughts, such as they are, can be found at his blog:
RussellBlake.com 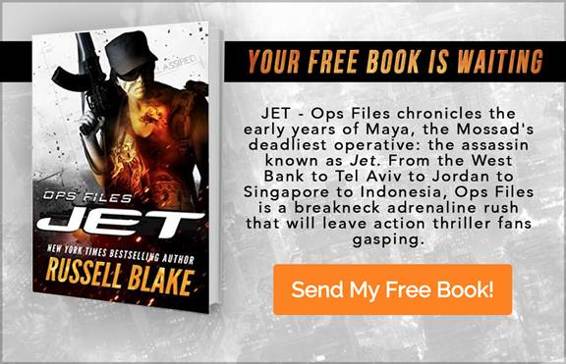 To get your free copy,

When he opened the fourth seal, I heard the voice of the fourth living creature say, “Come!” And I looked, and behold, a pale horse! And its rider’s name was Death, and Hades followed him. And they were given authority over a fourth of the earth, to kill with sword and with famine and with pestilence and by wild beasts of the earth.

Keith stood in line with his fellow passengers, a procession of humanity that shuffled forward with the torpor of a giant multi-legged organism. At the head of the beast, two women checked boarding passes, studiously ignoring any hint of friendly contact as they scanned bar codes with company-issued courtesy smiles.

JFK airport was packed to capacity, in its usual state of chaotic frenzy in the early evening as travelers sought to escape New York, some finishing up their business days and flying back home, others just beginning their journeys. If Keith belonged anywhere in the scheme, it was in the latter group. He was tall, with a leonine head atop broad shoulders, brown hair with flecks of gray just beginning to appear at the temples. His piercing blue eyes scanned the backs of the boarding crowd as the jet that would take them to Rome was fueled and readied. If his fellow travelers had cared enough to evaluate Keith, they would have guessed him to be a tired businessman embarking on yet another trip to cut a deal.

He shifted his weight from foot to foot, clutching his eel-skin briefcase in one hand as he adjusted the shoulder strap of his carry-on bag with the other, regarding the boarding area with casual precision, scanning the faces of the few seated stragglers for any hint of suspicion. His eyes swept the area, but as far as he could tell, nobody was paying the slightest attention to him. He was anonymous, just another in the throng, unremarkable. Just as he’d hoped he would be. He’d gotten away clean.

The icy gray deluge continued from the sullen clouds roiling over the city, occasional gusts of wind slamming sheets against the heavy glass of the terminal. The ground crew wore slickers, loading baggage into the bowels of the plane as they hurried to finish their task and get back under shelter. The squall had blown in unexpectedly – yesterday had been sunny and crisp, as springtime in Manhattan could be. But overnight everything had changed, mirroring Keith’s mood, the turbulent front a fitting metaphor for the storm taking place in his brain.

“Good evening sir. Welcome aboard,” the gate attendant chirped at him with the sincerity of a well-trained parrot.

Keith didn’t reply. Instead, he nodded and hurried forward – only to be stalled by another line at the end of the jetway as passengers waited to board. Hurry up and wait, he mused, but then his thoughts turned to other, less mundane matters.

The flight had been booked online with a one-time use debit card drawn on a bank in Bermuda – an operational account he’d kept off the books from a trip five years ago. He’d been negotiating with a financier who’d been instrumental in laundering funds for the Agency, defining the terms of his disappearance just ahead of federal prosecution for bilking his investors out of billions in a Ponzi scheme that had ensnared the wealthy across the U.S. He’d had an oily charm to him, an ease to his manner and a labile fluidity with veracity that was sociopathic, if highly effective. But as much as he’d been useful for financial errands that couldn’t fly by Congress, his flamboyant lifestyle and lavish expenditures had finally caught up with him, and increasing numbers of his trusting investors had been demanding their money back. Keith’s job had been to figure out how to make him vanish, and to evaluate whether he could keep his mouth shut and find a new life in Malaysia, or become another notch on a wet team’s belt.