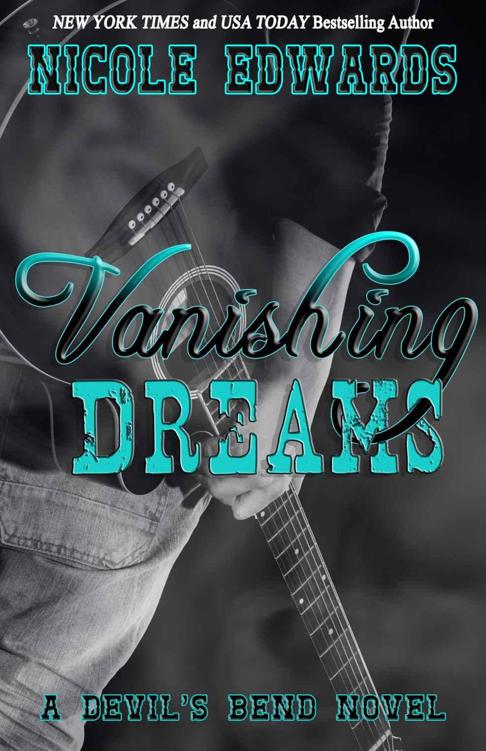 Holidays
with the Walker Brothers

This is a self-published title.

Without limiting the rights under
copyright reserved above, no part of this publication may be reproduced, stored
in or introduced into a retrieval system, or transmitted, in any form, or by
any means (electronic, mechanical, photocopying, recording, or otherwise),
without the prior written permission of both the copyright owner and the above
publisher of this book.

Vanishing Dreams
: A Devil’s Bend Novel
is a work of fiction. Names,
characters, businesses, places, events and incidents are either the products of
the author’s imagination or used in a fictitious manner. Any resemblance to
actual persons, living or dead, or actual events is purely coincidental.

This one is for you.

Sitting
on Cooper Krenshaw’s back porch, his girl by his side, Dalton Calhoun wasn’t
sure anything could knock him from his perch on top of the world. This beat the
best nights up on that stage that he loved so much. And that was saying
something.

Not
that he would call Katie
his girl
to her face. Knowing her, she’d
adamantly deny anything between them.

Dalton
would argue right back, but that was a moot point.

“Topless,
I’m not kiddin’,” Eric said with a chuckle.

“Are
you serious? What’d Tessa do?” Dalton asked The Rusty Nail’s bartender, who had
befriended him in recent weeks.

“Oh,
you know Tessa,” Eric said facetiously. “She was a good sport.”

Izzy’s
sweet, full-belly laugh echoed out into the twilight. “Right. Tessa. Good
sport. Yeah, if you consider throwing an apron at the woman before hustling her
out of the bar a good sport.”

“Where
was Jack?” Dalton asked, referring to Tessa’s younger brother who helped manage
The Rusty Nail, the small-town bar in Devil’s Bend that was owned by Tessa
herself.

“He
pretended not to notice,” Eric added, grinning. “But yeah, Tessa tossed the
woman out of the bar and told her not to come back.”

“All
because of Coop, huh?” Dalton glanced over at his good friend. The man who’d
wandered from Tennessee to Texas on a whim and found himself caught up in the
middle of what appeared to be a rocky little love fest.

“Don’t
act like you don’t have women tossin’ their panties at you on a nightly basis,”
Izzy accused Dalton directly.

The
small group erupted in a fit of laughter.

There
was no telling what would come flying at him on the nights he took the stage.
He’d pretty much seen it all.

When
Dalton’s good buddy, Coop, a fellow country musician, had mentioned they’d be
having an impromptu cookout at his house in the small town he’d recently moved
to, Dalton hadn’t been all that surprised. Even back in Nashville, Cooper was
always putting together spur-of-the-moment meals just so he could get his
friends together. And it looked like Coop had acquired a close little group of
friends in the short time he’d been in town.

Since
Dalton was staying in Coop’s guest room, he had inquired as to whether he could
bring someone, namely the woman sitting beside him — Katie Clarren, a waitress
at The Rusty Nail, who, from what Dalton could tell, Tessa considered a friend.
As it would seem, Cooper wasn’t the only one who was a little smitten over a
woman. However, Dalton wasn’t looking to announce that to anyone at the moment.
Despite his lack of interest in a serious relationship, he’d found himself a
little hung up on the black-haired beauty who’d caught his eye almost
instantly.

Luckily
for him, Katie had agreed to join him at tonight’s little soiree with
relatively minimal coaxing. These days, it was somewhat iffy as to whether she
was going to want to hang out. The woman seemed to be busy all the time, or at
least that was the excuse she gave him whenever he tried to get her to go out
with him.

Tonight
they were sitting on Cooper’s back porch, watching Tessa’s huskies, Havoc and
Harmony, chase one another around the yard, yapping and growling as they fought
over a tennis ball. The sun had recently settled beyond the horizon, and a
string of white lights hanging haphazardly from one edge of the patio cover
offered enough light to see by but not too much to attract the bugs. At least
not yet.

Not
that Dalton would’ve noticed. He was too busy trying to keep from staring at
Katie in that little white sundress that accentuated all of her luscious curves
along with the golden gleam of her tan skin. The woman stole his breath without
even trying, and it took a tremendous amount of self-control to keep from
making his intense interest known.

Dinner
was finished and partially cleaned up, and now the beer was flowing, as was the
conversation. Along with his notorious bar stories, Eric Lancaster, one of
Tessa’s friends since childhood, was telling them about growing up in the small
town of Devil’s Bend, Texas.

Every
now and then, Katie would chime in with stories of where she grew up; her soft,
reserved voice slid right along Dalton’s much too sensitive skin, making his
hair prickle with awareness. Much to his dismay, Katie wasn’t speaking nearly
as much as Dalton would’ve preferred. But damn, he loved to listen to her talk.
Although she seemed engrossed in the conversation, she wasn’t making a lot of
reference to herself, which was something Dalton had grown accustomed to since
the very first time she’d agreed to go out with him. He was incredibly curious
about what made the woman tick, yet he never seemed to get much out of her.

His
attention turned to Tessa, who was sitting on one of the steps that led down to
the yard while everyone else sat up on the porch behind her. She seemed a
little introspective at the moment, and Dalton wondered what she was thinking
about. Whatever it was, she clearly felt as though she needed to keep her
distance because of it.

Cooper,
on the other hand, was brimming with pride, not to mention slightly oblivious
to Tessa’s distance-keeping maneuver. Regardless, it was good to see the man so
damned happy these days. What with all the shit he’d endured recently with his
crazy fuck of a manager, Marcus Evergreen, Dalton was hoping the guy would get
a moment’s peace. Took running off to Texas to find it, but from the looks of
it, Cooper had found it.

Dalton
thought Texas looked good on Cooper. So much so that he was personally thinking
about making the move as well. When Cooper had presented his plan of opening up
an equestrian center in the backwoods town, Dalton had been on board almost
from the beginning. Now that he was here, he couldn’t see any reason not to
follow through with it.

It
wasn’t that his music career wasn’t in full swing, but this was the sort of
peace he had been searching for, one he couldn’t seem to find in the bright
lights of the stage. The sweet smell of the country was the yin to the country
music yang, something that would balance him and offer him a little downtime
from all the chaos.

Speaking
of chaos, there were three news vans sitting out front, probably full of
reporters chomping at the bit to figure out just what Cooper was doing down
here. Dalton knew it hadn’t helped when he’d stepped into the picture, drawing
even more attention to the situation, and because of that, he’d kept his mouth
shut. They damn sure weren’t getting any juicy details from him. What Cooper
did with his life was his own business. On a good day, Dalton avoided them like
the plague, and in the event he was cornered by one of them, he merely graced
them with a smile and a nod. No comment, no sir.

This
was the life; that was for damned sure.

“How
long have you two been married?” Dalton asked Eric and Izzy when there was a
lag in Eric’s latest story.

“Almost
six years,” Eric answered easily. “We got married a few months after Tessa and…
Oomph!”

Izzy’s
well-placed elbow to Eric’s ribs effectively shut the man up, but Dalton wanted
to know just where he had been going with that statement. Before he could
inquire or Izzy could offer an apology, Tessa spoke up.

“It’s
okay, Izzy,” Tessa called out, her focus still on the two dogs trampling across
the yard.

Tessa
waved him off before she said, “Eric and Izzy got married two months after
Richie and I did. The only reason they waited was because high maintenance over
there insisted on this huge wedding.”

Dalton
laughed, looking over at Izzy, who was blushing profusely.
Richie?
As he
watched the pretty young woman turn beet-red, he attempted to tie the pieces of
Tessa’s statement together. It took him a second, but then he remembered. Katie
had mentioned Richie, Tessa’s late husband. The guy had been killed in the line
of duty, from what he recalled.

“So
not true,” Izzy stated a little defensively, her wide eyes turning to her
husband. “He’s the one who wanted a big wedding.”

“Okay,
so that was mostly true,” Tessa added with a laugh.

“Do
you guys have kids?” Dalton asked, watching the two of them as they sat side by
side, their arms and knees touching, almost as though they couldn’t stand to be
too far away from one another. Clearly in love.

Dalton
admired the pair. At thirty-one, he’d hit a point in his life when he wished he
could find what they had, although he truly wasn’t quite to that permanent,
happily-ever-after place just yet. But he was getting there. The thought had
him glancing sideways at Katie. She was smiling, but she didn’t seem all that
engaged in the conversation.

“No
kids. Not yet. We’ve been talking about it, though.”

Dalton
saw Tessa flinch, and the way she jerked her head back, looking up at Izzy, had
probably hurt. Her mouth opened, then closed, and if he wasn’t mistaken, the
maneuver had effectively cut off something she had wanted to say before she
settled with, “It’s about time. I’ve wondered if you two would ever get with
the program.”

That
clearly didn’t sound like what she’d originally intended to say, at least not
based on her facial expression.

Dalton
continued to watch the interaction, noticing the way Izzy’s face fell. There
was a story there; even he could figure that out. “Do you want to try to have
kids again?” Dalton asked, the inquiry directed at Tessa this time.

A
slight elbow from Katie was a subtle hint that he’d gone and done it now. Aww,
hell. That clearly wasn’t the right question to ask, and Dalton felt as though
he’d been punched in the gut the moment Tessa pushed to her feet and took off
around the side of the house, disappearing from sight.

“Shit,
man, I’m…” He was sorry, but right then, the man he was trying to apologize to
obviously wasn’t interested in hearing it, because Cooper was on his feet and flying
down the stairs in quick pursuit of Tessa.