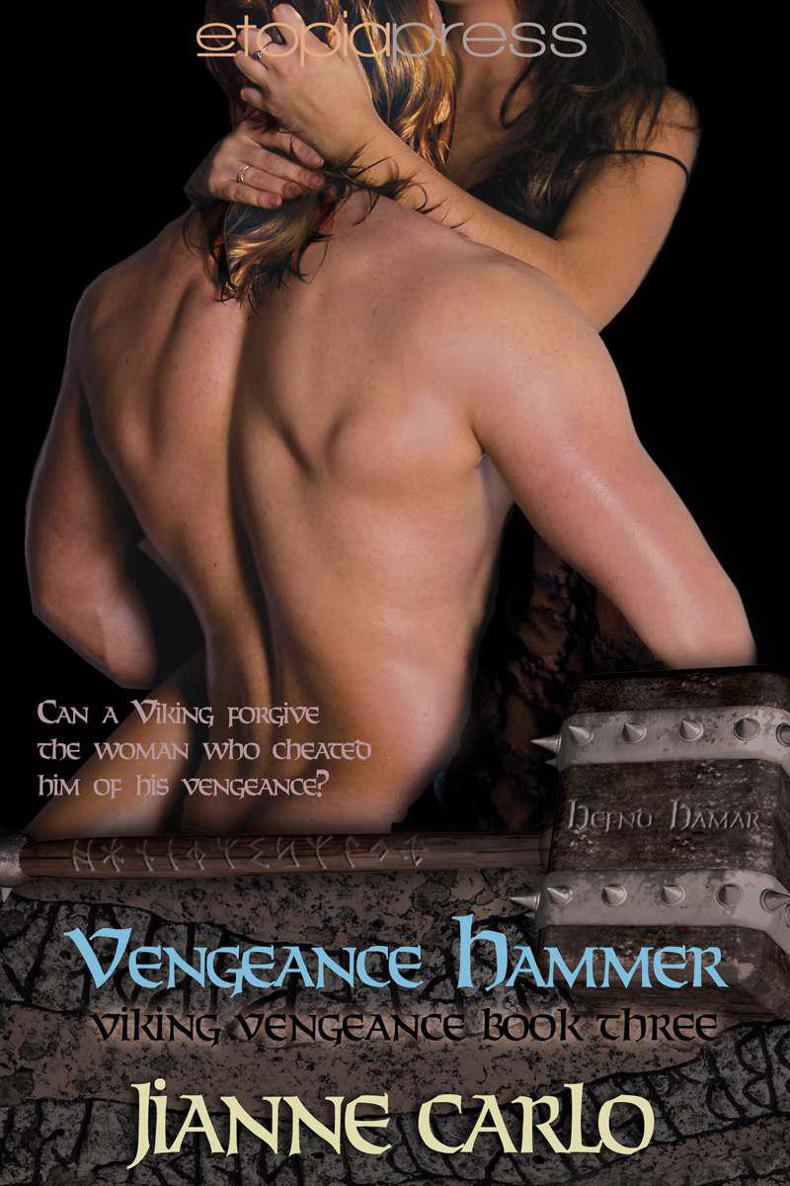 ~ Look for these titles from Jianne Carlo ~

The Bear and the Bride

“…another outstanding job by Jianne Carlo… If you appreciate a historical romance that transports you into the pages, then this is a story you must pick up today.”

~ Look for these titles from Jianne Carlo ~

Book One: The Bear and the Bride

Fate had cheated him. Dráddør fingered the runes carved into his weapon, the enormous steel mallet he’d named Hefnd Hamarr
,
Vengeance Hammer, in anticipation of the day he would fulfill the oath made to his dying father. Disgust, crippling and oppressive, banded his chest as he surveyed the smoke-infused, empty great hall.

“’Twas an easy victory.” His friend and ally, Tighe, Earl of Dalriada, heaved a long sigh. “Not a fitting one, mayhap…”

“Arnfinn died by his wife’s hand. Not by mine.” Dráddør snorted. “I cannot fulfill my vow of vengeance.”

“Nay, I beg to differ. You have in your hand the ultimate revenge. Once you wed and bed his daughter, the title is yours, all that he ever owned is yours, and his line is erased. Think you, Arnfinn, Earl of Caithness, will rest easy knowing that your blood prevails? That his daughter will sire your son?”

Tighe rested a booted foot on the fireplace’s lintel and prodded the half-charred mound of logs with a metal rod. Bright orange sparks sprayed in a wide arc and the fitful flames blossomed into long plumes.

Tighe shrugged. “One prick and you are Earl of Caithness. Shite man, you have gained a region as vast as Dalriada with no effort. The castle is intact and the keep secured. Take your nose out of your arse and do what must be done.”

Since his third and tenth summer, Dráddør had dreamed of killing the man who’d murdered his father and pictured the sweet vengeance of watching the life drain from Arnfinn’s eyes. But he knew better than to hold on to regret and self-directed rage. Too many of his friends had died because they’d lost focus on the ultimate goal—victory. He shook his head and shot Tighe a rueful grin. “Enough. I am done brooding. ’Tis time to take what is due me. Though ’tis not the pristine treasure the king boasted of.”

“I but hope the state of this hall does not extend to the rest of the castle. E’en the women of the barbarians see fit to pass a mop on occasion. I vow I have seen cleaner pig styes.” Tighe jabbed the poker into a half-full slop bucket. Steam hissed tight gray spirals. The putrid aroma of stale vomit penetrated that of burning pine.

Dráddør scanned the great hall and grimaced. “I have ne’er set eyes on a chamber in such a state. The floors are ankle-deep in discarded meat bones, dung, and rat droppings. Every table and bench is broken or scarred. The destruction we see here was wanton and deliberate.”

“Aye. You have an enemy, mayhap more than one at Lathairn Castle. The stench is powerful.” Tighe pinched his nose. “’Twill take much work to make this hall fit for living in, my friend. I, for one, will not sleep within these walls this eve.”

“Agreed. We will camp in the bailey. Mayhap the ocean breezes will mitigate the hall’s stink.”

“What of those who reside within the keep?” Tighe used a linen square hanging from his belt to wipe a smudge from the gleaming blade of his sword.

“I ordered Egron to gather all of Lathairn’s people at the bailey. Before the sun sets, each and every man, woman, and child swears fealty to me or they take their leave. But, first I will meet with the woman who cheated me of my revenge.” Dráddør glanced at the stone stairs carved into the left corner of the hall.

“Hear Lady Jennie’s tale first. Do not condemn her out of hand.” Tighe re-sheathed his sword.

“Lady Jennie poisoned her own husband, the father of her daughter.”

“The woman may have had good reason for what she did. Forget not that she also drank the brew and lies dying above stairs.” Tighe squeezed Dráddør’s shoulder.

“What would cause a woman to forfeit her own life in order to kill her husband?”

“Lady Jennie must have been desperate, Dráddør. Methinks she must have committed the deed because her daughter was threatened. Think on Skatha and how protective she is of her bairn. She would die for her son in an instant. Mayhap ’twas the only choice Lady Jennie had to save her daughter. Remember Lady Jennie was forced to wed the man who’d killed her family to gain her lands and the title.”

Tighe argued well in Lady Jennie’s favor. Skatha, his brother’s wife, would not hesitate to kill any who tried to harm her child. As would he when he had his own sons and daughters. In truth, he could not comprehend how a woman could live with the man who’d murdered her father. But poison? And to drink the brew? Who then would protect the daughter?

“I will listen and then make my judgment. ’Twill not take long. See you to the unloading of the langskips?”

“Aye. I will await you in the bailey.” Tighe spun around, cursing when a scrawny rat jumped down from a bench to the floor. He kicked the rodent out of his way, and stalked to the castle’s open doors.

Dráddør took a deep breath, marched to the stairs, and climbed them two at a time. He wanted this meeting over and done with and had already decided to banish Arnfinn’s wife, the Lady Jennie, to a distant abbey, if she lived. By King Kenneth’s and King Harald’s command, he must wed Arnfinn’s daughter to claim Lathairn Castle, its vast lands, and half-dozen villages, but that did not mean he had to suffer her mother’s presence.

Could Tighe have the right of it? Did Lady Jennie kill Arnfinn to protect her daughter? No matter. His path was clear and he would not hesitate. Before the sun set, the vows would be said, the consummation done, and the stained sheets hung as proof. But he would have answers first.

All the doors to the chambers of the castle stood open on his orders. Dark shadows filled the wide hallway on the fourth level, though the sun shone in a cloudless sky outside the keep’s walls. A stiff wind whistled through an open window at the far end of the passageway. He skirted a heap of broken porcelain and paused when a female speaking burr-accented Gaelic rushed out of a doorway to his left.

The little sprite could not have seen more than nine summers. She froze as if turned to stone at the sight of him, her mouth hanging open, eyes wider than saucers, thin arms stiff at her sides.

“Where is the lady of Lathairn Castle?”

The girl’s pinched features paled. Her throat worked. Raising her hand, her fingers trembling, she pointed to the room she had just vacated.

Dráddør nodded, then, sorry for the obvious death-fear he engendered, said, his voice low, his tone gentle, “I intend no injury to you or your mistress. Go to the bailey.”

She bunched up her grubby skirts, edged to the opposite side of the hallway, gave him one last glance over her shoulder, and raced past him. For a moment she reminded Dráddør of his sister, Hjørdis.

He waited until the girl disappeared around the bend leading to the stairs, hardened his resolve, and strode into the chamber. Bright sunlight streamed through two open windows on the far wall. He blinked the room into focus and frowned for ’twas the chamber of a servant and not that of the lady of the castle.

Wooden shutters clung to windowsills. Smoke rose in weak curls from a hearth in the north corner of the narrow, but long room. To the right of the struggling flames lay a straw-stuffed pallet.

The room smelled of pending death, a foul aroma that spoke of internal organs rotting, a scent all too familiar to a warrior. He stifled a grimace and shallowed his breathing. Sporadic gusts rattled the shutters, but did naught to alleviate the finality of death’s heralding stench.