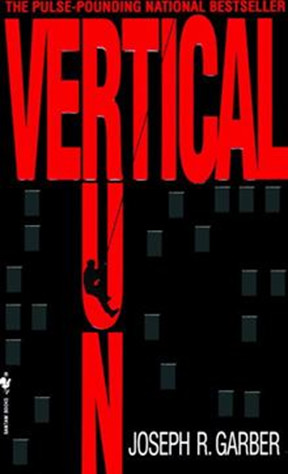 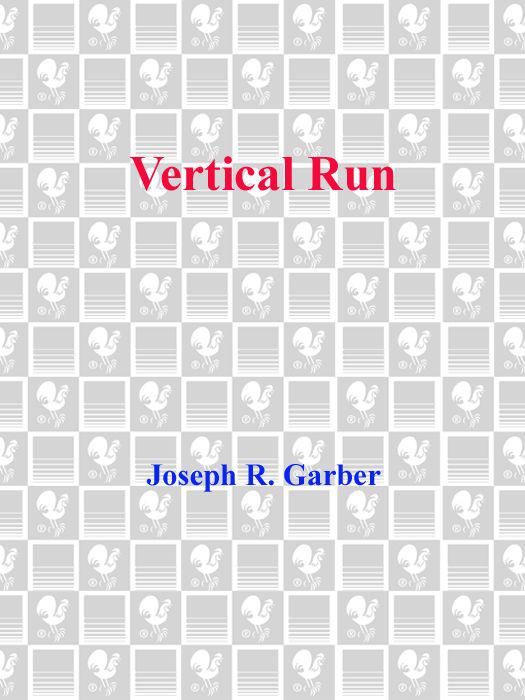 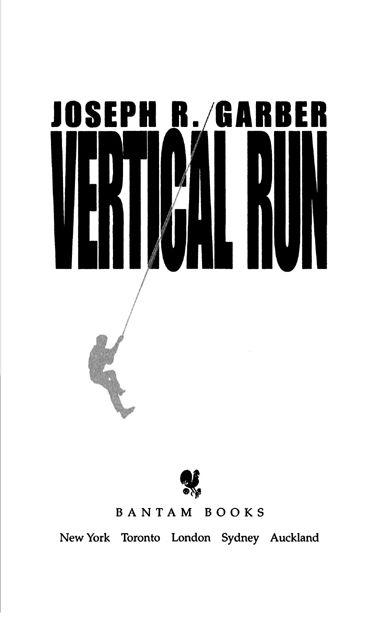 This is a work of fiction. References to real people, events, organizations, and locales are intended only to give the novel a sense of authenticity. All of the major and minor characters, events, and incidents in this novel are wholly the product of the author’s imagination, as are the companies with which they’re affiliated, and any resemblance to actual persons or real businesses or organizations, whether a similarity of name or description, is entirely coincidental.
This edition contains the complete text
of the original hardcover edition.
NOT ONE WORD HAS BEEN OMITTED.

All rights reserved.
Copyright © 1995 by Joseph R. Garber.
Library of Congress Catalog Card Number: 95–14084.
No part of this book may be reproduced or transmitted in any form or by any means, electronic or mechanical, including photocopying, recording, or by any information storage and retrieval system, without permission in writing from the publisher. For information address: Bantam Books.

Bantam Books are published by Bantam Books, a division of Bantam Doubleday Dell Publishing Group, Inc. Its trademark, consisting of the words “Bantam Books” and the portrayal of a rooster, is Registered in U.S. Patent and Trademark Office and in other countries. Marca Registrada. Bantam Books, 1540 Broadway, New York, New York 10036.

For Steve Oresman, known as Magpie,
a better sort of bird than those found herein.

Part 1. A Bad Day at the Office

Chapter 1: How Dave Lost His Job

Chapter 3: In Onion not for Eating

Chapter 4: All in the Mind

Chapter 6: Dave Goes for a Ride

Chapter 8: One of Our Own

—Vaughan’s
Almanacke and Prognostication for 1559

Man, biologically considered, and whatever else he may be into the bargain, is simply the most formidable of all the beasts of prey …

Then we began to ride. My soul
Smoothed itself out, a long-cramped scroll
Freshening and fluttering in the wind.

—Robert Browning, “The Last Ride Together”

The taller, David Elliot, is lank and dark and long of limb. His brown eyes are solemn, but he wears a subtle smile. The shorter, Taffy Weiler, is squat as a bulldog; his wiry hair is as startlingly red as the tie-dyed T-shirt he wears, and his blue eyes sparkle with no small deviltry.

Dave comes from Indiana. Taffy is a New Yorker born and bred. They met in San Francisco, which, this summer, is the only place to be. Now they are fast friends.

In September Taffy will start to work for a medium-sized electronics company near San Jose, an outfit called Hewlett-Packard; not many people at NYU have heard of it. Dave, having passed through Indiana State’s R.O.T.C. program, is entering the Army; he will report for duty the third week of August. It is certain that he will be sent to Vietnam.

This ride is their last journey together. Adulthood awaits them at summer’s end.

Today they are in the high Sierras, more than two hundred miles east of San Francisco. They crossed the mountain divide yesterday, picked up their horses and pack mule from a leathered-looking man who was waiting for them in a pickup truck, and began riding west into the mountain fastness.

Here, on a cobbled slope well above nine thousand feet, their horses have become short of breath. There is no trail; the mountainside is steep. The ground is granite, grey shot with streaks of black. Small white quartzes tumble beneath the animals’ hooves, and are so bright with afternoon sun that they cannot be looked at.

From time to time, Dave brushes a hand across the extravagant moustache he has grown this summer. He’s proud of it, thinking that it makes him look older. It does not.

“The moustache goes. I’ll be a crewcut, clean-shaven, all-American boy.”

“Oh man, yourself, and pass me a brew. Arguing with you makes me sooooo thirsty.”

Taffy pulls a lukewarm can of Ballantine from his saddlebag. He passes it to Dave together with a churchkey. Dave opens the beer and swiftly lifts it to his mouth, catching the foam on his tongue. Then he lifts the brim of his floppy straw hat, using a handkerchief, one of the six that his mother made him pack, to wipe away a line of sweat. “How much further?” he asks.

Taffy shoots him a lopsided grin. “According to my sources, we should have already been there. Of course my sources were stoned at the time.”

The two ride on.

It is nearly sunset when they arrive, a holy hour in which the heavens glow, and upon which a sacred mountain silence falls. They breast a small rise, and look down. Dave catches his breath. The loveliness is heart-stopping.

“It’s perfect,” Taffy whispers. “Just like they said, the perfect place. Am I right, or am I right?”

Dave doesn’t answer. He is rapt at what he sees, a small valley, five, perhaps six times larger than the stadium at Indiana State. It is nearly a perfect circle,
bounded by steep white cliffs on three sides, a towering stand of conifers at its farthest reach, a small green lake, emerald green, greener than a green bottle, in its center. Soft evening shadows lie across it. Nothing moves. The air is wine. Dave feels something that he has never felt before, and does not expect to feel again. He is uplifted; he is whole.

With a sudden rush, the sound of a feathered arrow through the air, a red-tailed hawk explodes from the sky. Its talons snatch a small grey animal. The hawk screeches in triumph as it flashes out of sight. All in a matter of seconds, here and gone, with only a burnished pinion floating in the air to mark its passage. Dave’s horse backs up nervously. Dave pats its neck.

“We camp by the lake, right, compadre?”

“Fine by me,” Dave answers. He is not really paying attention. Rather, he is cloaked in wonder, lost in dreams. Shangri-la, Bali Hai, Avalon, Armenia-in-the-Sky, Oz, Wonderland, Barsoom—everyone has a private place of dreams. This valley is his. The beauty of the place has seized him, and made him its own. He knows that he’ll never forget this valley, knows that for the rest of his life, no matter what troubles may come, the remembrance of this moment and this spot will comfort him and bring him peace.

This one moment has been the finest in his life, the finest he shall ever experience, and down all his days he will remember it with longing. He knows this, and the knowledge makes him sad.

Though fraud in all other actions be odious, yet in matters of war it is laudable and glorious, and he who overcomes his enemies by stratagem, is as much to be praised as he who overcomes them by force.

CHAPTER 1
HOW DAVE LOST HIS JOB
1.

On the morning of the day he disappeared, David Elliot awoke, as he did every weekday, at precisely 5:45
A.M
. Twenty-five years earlier in a hot, green place, he’d learned the trick of waking whenever he wanted. Now it was just another habit.

Dave slid his legs out from beneath Pratesi sheets. He glanced neutrally at where his wife, Helen, lay curled into a small, tight ball, on the right-hand side of the bed. The Panasonic clock radio on her nightstand was set for 8:20. By the time she awoke to her more cultured business day, he’d be in his midtown office, hard at work.

He stepped into the closet and swept his Nikes, sweatsuit, socks, and headband off a shelf. Then, padding over to the long, low, far-too-modern bureau—the most recent fruit of Helen’s obsessive redecorating—he fumbled a fanny pack out of a drawer, dropping a rolled-up change of underwear and his wallet, keys, and gold Rolex President watch into it.

After visiting the guest bathroom to relieve himself and brush his teeth, he went to the kitchen. The Toshiba coffee maker’s brew light glowed green. The timer’s digital display read 5:48. He decanted the pot into a large
enameled mug decorated with a picture of the 47 Ronin, the souvenir of a visit to the Sengakuji Temple during a business trip to Tokyo. He emptied the grounds from the brewer basket, filled the machine’s reservoir, and reset the timer for 8:15. Helen needed her morning coffee just as much as he did. Or maybe more so—Helen was far from sociable upon rising, and it was not until she opened the doors of her Lexington Avenue gallery that she put on her best behavior.

Something soft brushed his pajama leg. Dave reached down to tickle the cat’s chin.
“Bon matin, ma belle,”
he said, knowing that all cats speak French of preference. The cat, who was named Apache, arched her neck, stretched, and purred.

Helen loathed Apache’s name. She had insisted more than once that Dave change it. Second marriages produce more compromises than first marriages. Dave knew that, and knew that he should accede to his wife’s request. But a cat’s name is a cat’s name; it has nothing to do with its owner’s wishes. And so after five years of marriage Dave still called the animal “Apache,” while Helen (who, being blonde, was used to having her way) icily referred to it as “that cat.”