Viola Grace - Mask of the Overlord 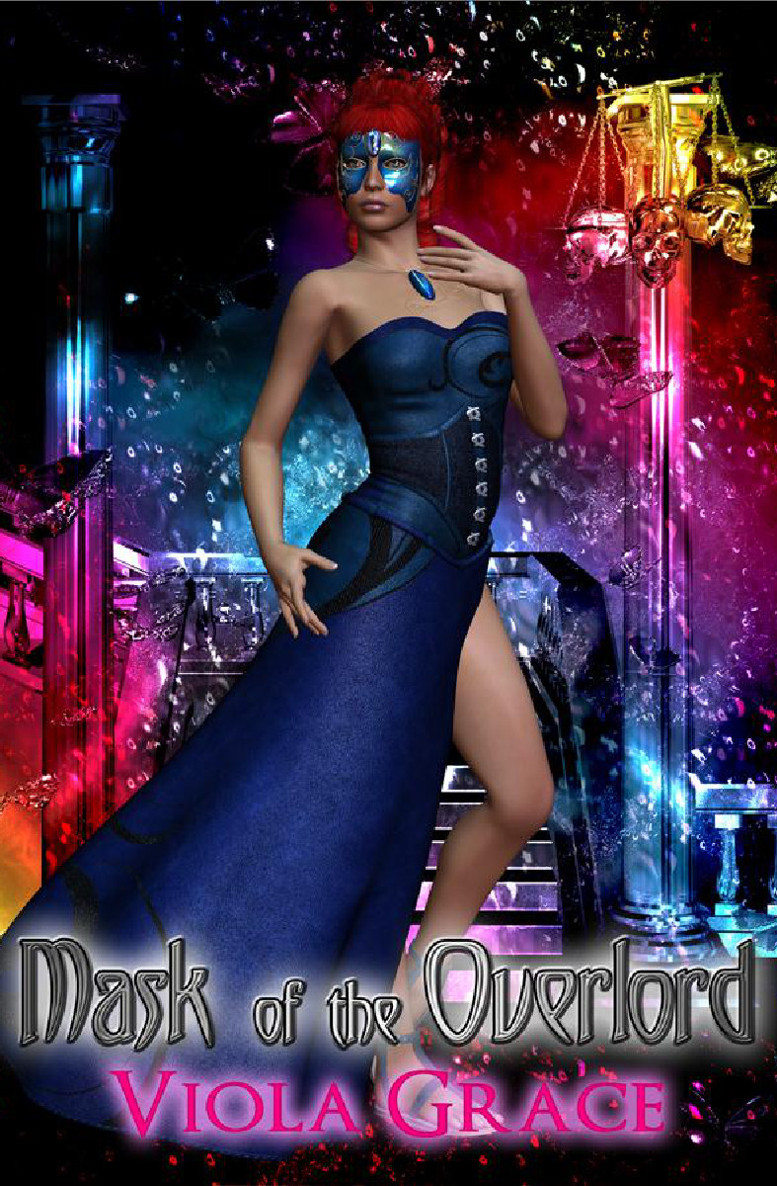 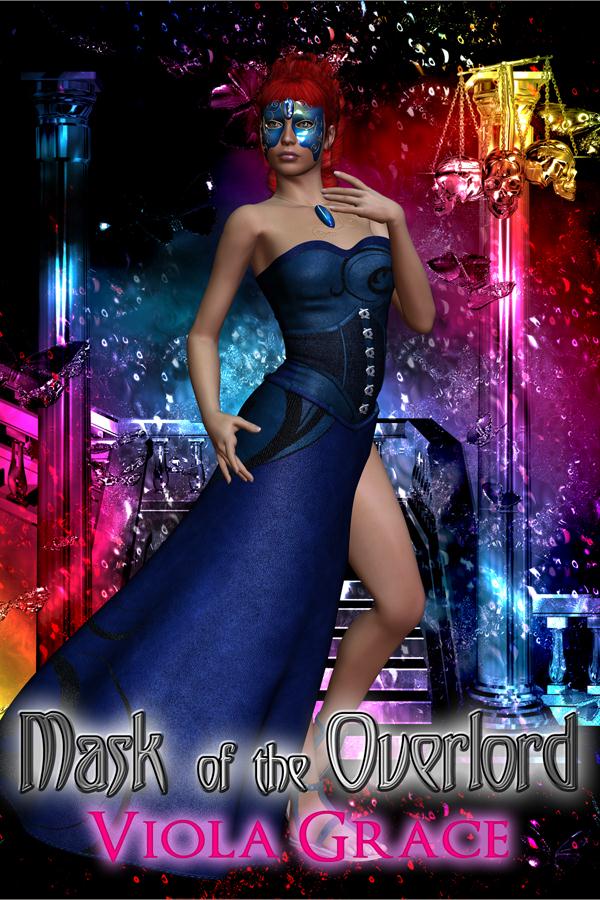 When her ship’s AI forces a landing on Priznik, Hellara knows that everything around her is about to change, possibly with devastating results. She is pampered, primped and produced in a ballroom with two dozen other women, waiting for a dance with the Overlord of Priznik. Three days of balls and events will occur before he makes his selection of a consort, but what Hellara sees in his eyes makes up her mind on him on day one. She sees behind the Mask of the Overlord in an instant, and now wants to see even more.

The unauthorized reproduction or distribution of this
copyrighted work is illegal. Criminal copyright
infringement, including infringement without
monetary gain, is investigated by the FBI and is
punishable by up to 5 years in federal prison and a
fine of $250,000.

Please purchase only authorized electronic editions,
and do not participate in or encourage the electronic
piracy of copyrighted materials. Your support of the
author’s rights is appreciated.

Mask of the Overlord

All rights reserved. Except for use in any review, the reproduction or utilization of this work in whole or in part in any form by any electronic, mechanical or other means, now known or hereafter invented, is forbidden without the written permission of the publisher.

Mask of the Overlord

f you give me time to boost the thrusters I can

“I get us past Priznik. Don’t land, Mother, I am begging you.” Hellara was almost crying at the terror that filled her with the name of the planet emblazoned on the screen.

Her father, Alfred Neering, was grey with nerves as well.

“Isn’t there a way around the planet, Mother?” Their AI was usually more flexible than this.

“No. The Overlord has commanded that all unwed women within the ages of twenty and thirty be brought to him for this day. I will do as my Overlord commands.” The feminine voice came through clearly and chilled everyone on board.

The captain scowled at the control centre.

“What is wrong with you, Mother? You know that Hellara can’t land on Priznik. You have the Oracle’s words in your system.”

“I am aware of that, Captain, but this ship is going to Priznik. Hellara Neering will attend the ball.”

Hellara stood shaking and looked to her father and brothers. They looked back helplessly and returned to their stations. Mother controlled 1

everything on the
Dust Up
. If she thought it would be best for Hellara to be delivered unconscious and dangling upside down, they would help her do it.

She bit her lip and returned to her work, sliding under the console and working on the air lines.

Her hands shook as she handled the spanner.

Tears tracked down her face as she tried to do her job, but with every passing second they were getting closer to Priznik and the doom of the universe.

Hellara had been five when the Dust Up landed on Miska. She had wandered around until she found a woman, lying in a bed with wires and tubes running along her skin. The pleasant voice had greeted the little girl and asked her if she had a question.

Little Hellara followed instructions and placed her hand on the query stone just in time for her father to hear,
“When Hellara goes to Priznik, the
world as they know it will come to an end.”
It was years before her father told her what that had to have meant, and the Oracle was never wrong.

Terror of the very name of Priznik had been instilled within her and it hadn’t eased up over the years.

Breathing to control her racing heart, she looked at the toxic lines and debated ending it all. After all, one couldn’t be doomed if one were dead. She shook her head and gritted her teeth as she 2

repaired the connection. What ever happened to her on the planet, she would face it with as much grace and style as a woman born and trained in star ship repair could manage.

She fiddled nervously with her jumpsuit, not quite sure what she should be wearing. Her
brothers
stood as an honour guard, their regenerated flesh in perfect shape, each body in ideal condition for a salvaged form.

Hellara’s talent for repairing any kind of computer or flesh had gotten them dozens of commissions, but her penchant for picking up battered and wounded
Regens
was a hobby that her father had never gotten used to. Warriors, built, damaged and left for dead were now the crew of the Dust Up. She called them her brothers, and that was how they treated her, as a little sister.

Mother was the only one who outranked her in their eyes.

She waited for customs to check the ship.

Locking the crew in a main room was traditional during customs sweeps, but Hellara had the feeling that they were looking for more than just rogue imports.

Her father was with the officers, working on the manifests and detailing their ship’s thruster damage. She was left with her brothers and waiting for whatever was going to happen next.

The door opened with a hiss and eight officers 3

of the Priznik palace stood in the opening. “Lady, you will come with us. You have a ball to attend.” Hellara stood and walked into their grouping.

They surrounded her and she marched forward to her doom and the doom of all those on the planet, including her father and brothers.

The spaceport was empty of all females, only male staff were visible and they did not look happy.

The guards surrounding her did not look at her at all, aside from assisting her into a vehicle that allowed them all to stand as a group while it whisked them into the most elaborate city that Hellara had ever seen.

The guards walked down empty halls and waited while sombre staff members dressed her in a gown, slippers and affixed a mask to her.

She finally found her voice. “What is the mask for?”

The dresser jumped in surprise. “The balls will take place over three nights. The Overlord will choose his mate from all the women assembled by compatibility alone. While your red hair is unmistakable, we have provided a few decoys to distract him. You won’t know who he is and he won’t know who you are.”

The dresser looked as if he would continue, but a gong sounded and their brief time was up.

He gathered his equipment and was almost to the door when he turned. “It is a good thing you 4

arrived today. Tomorrow would have been too late.”

She looked at the elegant lithe figure in the mirror and looked back at him. “Lucky me.” The guards arrived in moments and they formed around her again. This time she was not the only woman in the halls. Clusters of guards and young females were all moving toward a huge set of doors.

Each woman was wearing a mask and most looked terrified, though a few looked very pleased with themselves.

All of the women were elegantly dressed, no two were precisely outfitted in the same manner.

As they entered the ballroom Hellara’s guard dispersed and left her standing at the back of the crowd of women.

A line of men, each identical to the other were on the other side of the ballroom. As music began, servants manned the buffet tables and wine was poured into glasses for those attending the party.

Hellara had never seen this amount of women together in one space. The smirking women surged toward the approaching men. Masks were everywhere.

She skirted the crowd and moved behind a pillar. She would be safe here while she figured out what was going on.

Peering around a decorative drape, she watched the way the men moved. Each step was familiar to 5

her and the gait and posture rippled in her mind.

The men all had long black hair threaded with tiny gold bands, a gilt mask that framed black eyes and let the full curve of his lips catch the eye of the women facing him. Hellara couldn’t stare long at the face before the impressive structure of the body got her attention and she was drawn to the elegant vest barely containing a massive chest, arrowing her gaze down to the wide belt and the bulge visible in his snug trousers beneath it. His boots were tight, black and had a high polish. Each and every male was dressed precisely the same.

From her vantage point, she counted one male for every two females. She hid behind the post and watched each male take a female to the dance floor, he danced with her twice and then returned her to the group, taking another female in his arms.

It was surreal to watch the same man dancing with different women at the same time, but that was what she was seeing.

Her stomach rumbled, but she didn’t want to expose herself to the attentions of the men. She couldn’t sit in the dress she had been given, so she leaned against the pillar and tried to not think of the food that was just out of her reach.

After two hours of watching the dancers she decided that the path was safe. When the men were all dancing with partners for a fresh round, Hellara darted out and daintily snagged a few tidbits from the table as well as a glass of wine 6

before returning to her hiding place.

The servants manning the table had seemed friendly, so she did not think that they would tell on her.

She was just licking her fingers clean when a shadow fell across her hand. Swallowing nervously, she looked up into the eyes of one of the males. “The Overlord, I presume?” He held out his hand and she finished licking her right hand, giving him her left. His gaze had fixated on her tongue as she removed the last of the cream. She watched him visibly shudder and jerk as he got control over himself.

As he led her to the floor, she whispered, “I don’t know how to dance.”

“Leave it to me.” His voice was low and amused. The full lips quirked and he stood on the side of the dance floor, holding her tightly against every inch she had been admiring from a distance.

It was quite a few inches if her guess was any estimation.

He shifted forward and she jumped back in reflex, but with his hand on her waist and the other holding her right hand, she had no choice but to stay plastered to him. He moved again and she got out of his way and after a few more of those moves, she realized that they were dancing.

He spun her around and around, each step letting the heat from his body soak into hers.

“Aren’t we supposed to talk or something?” She 7

bit her lip as the second song began and he led her in a different pattern.

“What do you wish to talk about?”

Twin Cities by Louisa Bacio
In the Beginning Was the Sea by Tomás Gonzáles
3037 by Peggy Holloway
Justice by Jeffrey Salane
Fasten Your Seatbelts: A Flight Attendant's Adventures 36,000 Feet and Below by Christine Churchill
The Dalai Lama's Cat and the Power of Meow by David Michie
Hushabye by Celina Grace
50 Ways to Hex Your Lover by Linda Wisdom
Thrill! by Jackie Collins
At the Heart of the Universe by Samuel Shem, Samuel Shem
Our partner