Virtue and Vanity: Continuing Story of Desire and Duty 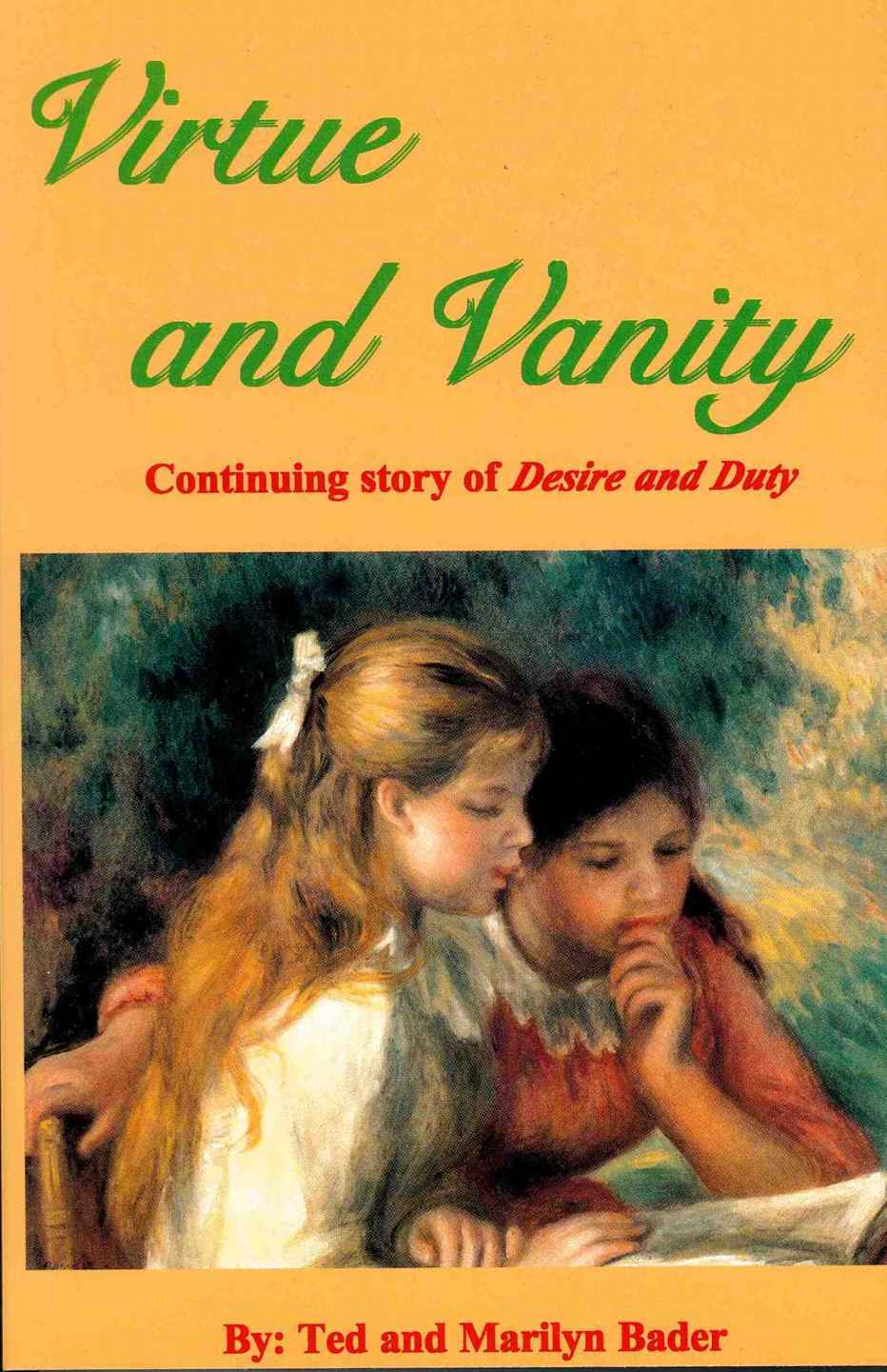 No part of this book may be
reproduced ,
stored in a retrieval system, or transmitted, in any form or means, electronic, mechanical, photocopying, microfilming, recording or otherwise, without written permission from the publisher.

Dr. Ted Bader specialized in liver and digestive disease. His medical textbook on viral hepatitis has entered its third edition. His wife, Marilyn, is a freelance writer and computer consultant. They are both members of the Jane Austen Society of North America.

“La lecture” by Pierre
Auguste
Renoir. This nineteenth century painting is on display at the Louvre, Paris, France. The picture suggests the Bingley sisters, Laura on the left and Sarah on the right.

Virtue and Vanity is written as a self-contained story. However, readers may also enjoy its predecessor, Desire and Duty which tells an earlier story about the main characters.

We have attempted to present historical possibilities. Readers of our last book enjoyed historical notes and we have appended another set at the end of this volume.

We endeavor to answer all comments about this book. Please write to us in care of the publisher.

Related books of interest by Revive Publishing are listed on the last page.

Georgiana grasped her husband’s arm more tightly than usual as they slowly descended the quiet staircase of the British embassy in Paris. Thomas paused for a moment and placed his hand over hers, “What can I do to make this reception easier for you?” he asked with
concern.

She looked up at her beloved, the newly appointed British ambassador. “Since I became comfortable welcoming visitors to Staley Hall, I hoped I had out grown my fears.” She drew in a deep breath, “We talked about this before you accepted the position of ambassador and I still feel this is what we were meant to do. Just knowing that you understand my shyness is a comfort.” With a shaky breath she raised her chin a bit, “I shall be fine, dear husband.”

“I am so proud to have you as my wife. I pray that you will soon feel as secure and confident here as you did at home in Derbyshire.” He leaned to whisper in her ear, “If you feel the need to escape the crowd, just signal me and I will escort you to the garden.”

Georgiana smiled. “I believe I shall always feel secure if you are nearby.”

Thomas kissed her briefly and they continued their descent.

“Thomas, dear, I hope the Algerian matter has not strained your relationship with General
D’Arbley
.”

“I do not know. The French are obstinate about making Algiers into a colony after punishing the pirates and releasing the Christian slaves. . . .
This despite their initial promise to evacuate after achieving their goals.”

A
t the bottom of the stairs, they moved to the front of the reception line. Soon others joined them to form the reception line. As Georgiana greeted guests, she became more concerned about making them feel welcome than what they would think of her.

“Lady Staley, it is good to finally meet you,” said a portly, yet elegantly dressed French woman as Georgiana greeted her. “Your husband told us so much about you when he lived here as a young man. It is a delight to see he did not exaggerate your beauty.”

Georgiana felt her cheeks blush, but kept her voice steady, “Thank you Madame Duval. I am afraid Thomas has said little about his prior stay in France.”

“
Psshaw
, why should he think of his friends here when he has such a lovely wife.
Most of his friends were soldiers or old folks like
myself
.” Her eyes darted to the front entry where Madame
Lamballe
was being announced. Arching her eyebrows she whispered, “I am surprised to see she was invited. You are indeed gracious to include her after the coquetry she used on Sir Thomas.”

Seeing a quick flash of confusion on Georgiana’s face, Madame Duval rushed on, “Oh my, I see you did not know about that either.” Patting Georgiana’s shoulder sympathetically, she whispered, “I will tell you all about the affair later.”

“Indeed, I look forward to getting acquainted with all of our guests,” Georgiana carefully replied as she turned to direct the matron through the reception line. “Madame Duval, this is my niece, Miss Sarah Bingley. She is staying with us at the embassy.”

Sarah curtsied. After a few words of advice about the highlights of Paris, Madame Duval moved on.

Turning toward her aunt, Sarah saw Madame
Lamballe
progressing down the line to Georgiana. With a worried look, Georgiana squeezed Sarah’s arm and whispered, “Such beauty. I wonder why Sir Thomas never mentioned
her?
”

Sarah thought it best to feign a smile, to imitate her aunt’s expression, as Madame
Lamballe
neared.

Madame
Lamballe
curtsied to Lady Staley and said, “It is easy to see your attractive charm which I have heard so much about. My defeat can now be accepted gracefully.”

Lady Staley curtsied and tried to act as though she knew what her Parisian visitor was referring to.

Sarah’s attention was interrupted by General
D’arbley
, the Minister of Foreign Affairs for France, who moved to the head of line next to Sir Thomas and Lady Staley.

General
D’arbley
leaned over and whispered in Sir Thomas’ ear for an extended time. The English ambassador looked chagrined and said out loud, “I am glad the escapade can finally be
revealed .”

Sarah intervened to greet the next guest as Georgiana’s attention was abruptly turned to Sir Thomas. This was the first time she had seen her aunt lose composure. It was difficult for Sarah to imagine Georgiana as extremely shy; but, her mother, Jane
Bennet
-Bingley told her it had been so in years past.

Sarah doubted that any unfavorable exposé would ever happen to the
Staleys
since they were so devoted to each other. Nonetheless, her aunt’s curiosity was beginning to affect
herself
.

The grand room was filled with elegant ladies and gentlemen. A sharply dressed British soldier moved to end of the line and announced that dinner was ready. The two dozen guests filed into the ornate embassy dining room and stood before their chairs at the long rectangular table. General
D’arbley
stood at one end and Sir Thomas at the other with Georgiana and Sarah next to the English ambassador. The party was seated.

Sarah could rarely make it through the seven courses offered. Early on, she watched her aunt take small portions so as to stay involved with each course. The pheasant, the cake, the dessert (research) was impressive to her palate.

Finally, the wine was brought and General
D’arbley
stood and spoke in excellent English, “Tonight, I wish to toast not only the English ambassador, but my good friend, Sir Thomas Staley. This dedication may be long, so hold your glasses, but it can now be told of his service to me.”

“Eleven years ago, during his exile in France, Sir Thomas volunteered to travel through the territory of our political enemies with documents for our comrades in Normandy.”

“Unfortunately, he was discovered and arrested. A--how do you say--kangaroo court sentenced him to the guillotine. For reasons still unclear to me, he was released and allowed to return to Lyon. For such gallantry I shall always be indebted. I tell you this story so you can all understand why I hold him in such high esteem.”

The assembled group toasted Sir Thomas and clapped their hands while some raised their voices and cried “speech”.

As Sir Thomas stood, Sarah saw her aunt gaze at her husband with glistening eyes. He then spoke in perfect French, which would be interpreted as
,  “
Our admiration is mutual. General
D’arbley
has done much to restore Anglo-French relations since the last war.” Sir Thomas paused for a moment and continued, “
the
only part about my capture that greatly concerned me, besides the guillotine, was the detection of my disguise. I asked my captors how my French had given me away and they assured me it had nothing to do with my use of the language. Rather, I suffered discovery because one of the partisans recognized me from the time of my convalescence in the local hospital.”

Finishing his response, Sir Thomas moved to pull Lady Staley’s seat away from the table. He took her hand and announced, “Now, it is time for the ball.”

The
Staleys
moved to form the head of the line as several other couples moved to join them in the smooth, rhythmic dance. Sarah stood and moved towards the ballroom. Madame Duval brought her heavy set frame over to Sarah and smiled, “I see no unattached men here to dance with a pretty girl such as you.”

“I suppose it is impolite, but an old busybody such as myself is
curious.
. . why is it that you brush your hair so far forward on the left side of your face? Are you trying to start a new fashion trend?”

“Not at all, Sarah paused and studied the older woman for a moment. “If you will keep this to yourself. . . .”

Sarah was not sure the lady would be able to keep any kind of
secret.
. . but, it mattered little. Keeping her voice steady, trying to sound as if it were of no real consequence to her, Sarah answered, “It is merely to cover the scar on my left temple from a childhood illness.”

“I daresay that makes perfect sense.” Smiling and patting Sarah’s hand she continued, “I find you most unaffected. We must become better acquainted. Please visit me in my lodgings sometime. If there is anything I can do while you are in Paris, let me know.” Glancing beyond Sarah’s shoulder, she added, “Here
comes
your aunt.” She curtsied, “Lady Staley.”

Quickly glancing about, she rushed on, “Let me now tell you both now what I so clumsily mentioned earlier.” She lowered her voice, “Do you see Madame
Lamballe
sitting across the way?”

Georgiana and Sarah glanced in the direction.

“She was, and perhaps still is, one of the most beautiful women in Southern France. Eleven years ago she set her sights on Mr. Thomas Staley. She tried every type of refined coquetry known to Parisian debutantes,” chuckling, she added, “without an inch of success in fixing Mr. Staley upon her. Rumor had it his heart was centered on a beautiful woman in England. Now that I have met you, it is easy to understand his loyalty.”

Sarah observed her aunt’s face blush slightly and soften as she finished looking at her formerly unknown rival and turned her attention to Sir Thomas talking with a group of men.

She said softly, “He never told me his faithfulness to me was so sorely tried.”

Sarah left the ball early and retired upstairs to the Staley’s private quarters. She sat reading in the small anteroom off the parlor. She heard Sir Thomas and Lady Staley come into the parlor and dismiss their servants. After a quiet moment, she heard them kiss.

Then Georgiana softly said, “I never knew you were so tempted in your loyalty while my family slandered you.”

“You forget, I knew I was innocent and, therefore, had hope of one day returning to claim you. Besides, I have always loved only you.”