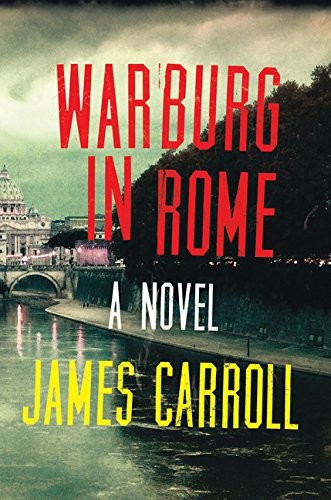 The Library of Congress has cataloged the print edition as follows:
Carroll, James, date.
Warburg in Rome / James Carroll.

Hear this, all ye people;

give ear all ye inhabitants of the world.

D
AVID WARBURG HAD
received the notice the evening before, an order to appear, setting this early appointment. He’d come downtown just as the sun was turning the dark city pink. From the window of his office on the third floor of the second most stately building on Pennsylvania Avenue, he’d watched the morning ease fully into its own. The Washington Monument took the light, a garment. At five minutes before the hour, he set out.

The broad, polished corridors would be bustling soon with Treasury Department functionaries, but not yet. He strode to the central marble staircase, a gleaming gyre below the soaring translucent dome. One hand in his trouser pocket, his jacket back, one hand riding the railing, he skipped down two steps at a time, coming to the grand second floor, which was dominated by the diplomatic reception room and, adjoining that, the secretary of the treasury’s suite of offices. Cool it, he told himself. Swinging left toward the ornate double door, he slowed his pace.

Last night, Janet had been certain that this meeting with the secretary himself promised something, as she put it, “really good.” But Warburg was wary. It had irritated her that he’d declined to match her high spirits at the news of this summons. In the past, pointer in hand, he’d briefed Mr. Morgenthau on debt security legislation and congressional vote counts, but he’d never been formally introduced to him. This summons had come without explanation, which was enough to spark Janet’s wishfulness—another steppingstone toward the day they would get married.

Warburg couldn’t acknowledge it to her, or to anyone, but he was appalled to find himself a seat-of-government paper pusher as the war built toward an inevitably savage climax. The latest report was that German troops were marshaling on Hungary’s border, Budapest another morsel soon to be devoured in a Nazi rampage that was not impeded by the Red Army offensive on the Dnieper. Warburg was that rare, able-bodied man of twenty-eight not in uniform. Dancing at midnight on the Shoreham terrace thrilled Janet, but it embarrassed him to be seen there, even with such a beauty. She was happy just to rest her cheek against the lapel of his suit coat, as they softly swayed to the orchestra’s mellow rhythm. He felt tenderly toward her, but tenderness was a flimsy bridge across the yawning gulf that had opened between them, whether she knew of it or not.

On his office wall, where Janet did not see it, Warburg had posted a floor-to-ceiling map of Europe, with yellow pins denoting General Mark Clark’s stymied army in southern Italy, still the only Anglo-American force on the continent. There were also pins to the north and east, red ones, marking the Soviet offensive lines. Green pins, concentrated between the Danube and Vistula Rivers, marked places reported or rumored to be the Germans’ forced labor, transit, and prison camps. Warburg had been tracking the Nazi killing sites for months, though it had nothing to do with his official work.

The war, darling
, he’d say as they were dancing,
by the time it’s over, Europe will be a charnel house. Did you hear me?
No, of course she didn’t, because he’d said it to himself. It was not Janet’s fault that he’d become obsessed with the slaughter lands to the east, nor was it her fault that he found it impossible to speak with her of his obsession. And, later, the face powder on his lapel would not come out.

Right out of law school, Warburg had been conscripted like most men, though the draft, in his case, was not into the Army. When, in the spring of ’42, the law school dean, a former New Dealer named Harold Gardner, had taken the job of general counsel at the Treasury Department, he had taken a handful of newly minted lawyers with him, including Warburg. “Don’t be ridiculous,” the dean had said to Warburg, swatting away his initial demurral. Warburg had already filed enlistment papers, effective at the term’s end, itching to join the fight. But Gardner was insistent: “Washington is where your country needs you, David.” Warburg still refused, but Gardner chided him: as a lawyer in uniform, Warburg would never see service overseas in any case. He’d be a JAG mandarin, bringing acne-faced AWOLs to court-martial, at Fort McClellan in Alabama or someplace worse. In fact, Gardner had promised to see to it.

And so Warburg had joined the fray in Washington, becoming one of the samurai bureaucrats in the thick of the vast legislative reinvention of federal finances made necessary by the explosion of war spending. The rolling congressional authorizations for the war bond program was Warburg’s particular portfolio. As it turned out, he’d already been central to the raising of more than half a billion dollars in war funding, which helped keep inflation down and the war economy booming. Not bad service, that. But alas, judging by the markers on Warburg’s wall map, Hitler wasn’t as yet much hindered.

At the treasury secretary’s reception area, a primly dressed woman promptly showed Warburg into the ornate inner office. Harold Gardner was there, sitting with Morgenthau in matched leather wing chairs in an alcove where one large Palladian window overlooked the White House. There was a clear view of the President’s mansion because only the faintest pale lime of early buds tempered the stark black-and-white branches of the late-winter trees. A third man was seated on an adjacent sofa.

The three men came to their feet at Warburg’s arrival. Henry Morgenthau Jr., a slim figure whose tanned baldness struck an elegant fashion note, was nearly as tall as Warburg. Yet Gardner was the first to stretch out his hand, putting his responsibility for this meeting on display. He let his affection for Warburg show, saying as he turned to Morgenthau, “David was the best we had in New Haven.” But before the secretary could reply, or even grasp Warburg’s hand, his desk buzzer sounded, and he went to the telephone.

“Friendly greetings to you, Felix,” Morgenthau said grandly into the mouthpiece. Gardner and the other man resumed their seats, but Warburg remained standing, as if holding a hat.

“Thanks for calling back,” Morgenthau said. “Too early? Of course not. I’ve been at my desk for an hour. Same as you.” Morgenthau listened, then laughed. “How is Frieda?” He paused, then added, “Give her our love.” There would be a performance aspect to this conversation. “The reason I called—I have one of your young relations here with me right now.” Pause. “That’s right. I’m about to brief him on the job I’m giving him. A very important job, and I wanted you to be the first to know. Yes. In Rome, once liberation comes . . .”

Listening, Warburg thought, Whoa, what’s this? He exchanged a quick glance with Gardner, catching his all but imperceptible nod. Rome? Gardner had insisted more than once that Warburg was indispensable on Pennsylvania Avenue, with three new bills a month coming off his desk. “The Appropriations Committee,” Gardner had barked repeatedly, “is clay on your potter’s wheel. Can’t do without you.”

“. . . the War Refugee Board,” Morgenthau was saying. “
My
War Refugee Board. Once Mark Clark captures it, Rome will be the nerve center and the escape hatch both. And your young man will run things.”

Warburg took this in with apparent calm, but it was shocking news. The absolute opposite, he realized at once, of what Janet was hoping for.

War refugees. Everyone in Treasury was aware of Morgenthau’s having badgered Roosevelt into long-overdue action on refugee relief, such as it was. “Refugee” was a generic euphemism, since those in the know—certainly including Warburg, whose gaze drifted to his wall map dozens of times a day—understood full well that the urgency applied to Hitler’s particular target. Jews.

For months, Morgenthau had been sounding death camp alarms inside the government, finally forcing Roosevelt’s hand by threatening to go public with the still secret cables coming in from Geneva. Elsewhere in Washington, and even in certain hallways at Treasury, the War Refugee Board was seen as the product of a Jew’s special pleading for Jews.

In Warburg’s own shuttling between Treasury and Capitol Hill, the WRB was not much discussed, and overseas operations of every kind were beyond his purview. Hell, overseas operations were beyond Morgenthau’s purview, but that had not stopped him. Picking up on the secretary’s spirit, Warburg had made a point to get his name added to the special cable circulation list, the weekly Geneva reports with their growing drumbeat of transfers, deportations, and disappearances. Green pins, to Warburg. Jewish pins.

And now what was he hearing? He himself to be appointed to the work? Rome? Warburg could not—

“David,” Morgenthau said abruptly, but into the phone. “David Warburg,” in answer to the other party’s question. Morgenthau’s tanned face had gone white, the skin at his mouth so taut it barely moved when he repeated, “Yes, David.”

All at once Warburg realized with whom Morgenthau was speaking—
Felix!
—and what was happening. A feeling of alarm made him momentarily lightheaded. He had to stifle the impulse to interrupt, to explain. It was an old feeling. Glancing again at Gardner, he saw the pleased expression on his mentor’s face begin slowly to darken as he, too, realized from the change in Morgenthau’s demeanor and voice that something was wrong.

Warburg knew how important it was to meet Morgenthau’s gaze, to return it steadily. He said, “I’ve heard of him, of course.”

“‘David is not one of our names,’ he said.” Morgenthau looked at the man on the sofa. “Do we do that, Rabbi? Establish a roster from which family names are taken? Jacob? Moses? Moritz?”

Morgenthau looked back at Warburg. “I approved your appointment thinking you were of the Warburgs.”

“I am, Sir.” He smiled pleasantly. An old trick. The way to be at ease is to be at ease. “But the Burlington Warburgs,” he said, “not the New York Warburgs. My father was a butcher. Not a banker.” A line Warburg had used before. In fact, he’d used it with Janet’s parents.

“Did you know this, Harold?” Morgenthau asked Gardner.

“No, Sir. I just assumed . . .” Gardner met Warburg’s eyes, and his expression said, You
let
me assume.

“How’d you get to Yale Law School?”

“Middlebury College. Basketball scholarship. It wasn’t until I got to New Haven that I even knew about the New York Warburgs.” Quite pointedly, Warburg refused to meet Gardner’s eyes. Was the imagined elite family connection why the law school dean had made him his favorite? Of course. Nor had Warburg been so naive as to have been ignorant of that. Warburg, like Oppenheim or Lehman or Loeb—the exception Jews. Rich. But David Warburg had not established those rules. “I never pretended to be what I am not,” he said. Again Warburg’s easy smile, a stance that cloaked what his seniors might take as rebuke.