Read We Were Here: A New Adult Romance Prequel to Geoducks Are for Lovers (Modern Love Stories Book 1) Online

Tags: #We Were Here

We Were Here: A New Adult Romance Prequel to Geoducks Are for Lovers (Modern Love Stories Book 1) 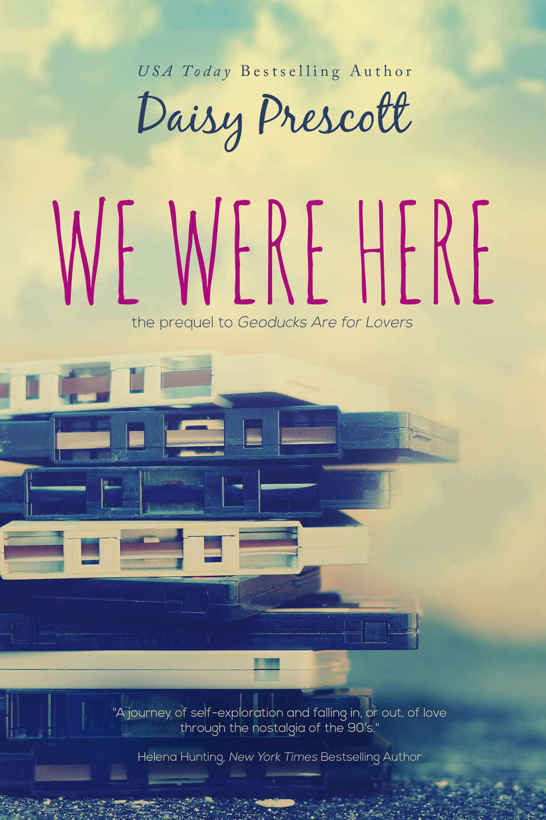 Praise for
We Were Here

“
Daisy Prescott’s
We Were Here
is a brilliant, nostalgic, emotional journey that takes you back to a time when all the firsts in life meant something—and set the course for journeys unknown. You’ll have a ‘book hangover’ long after reading this funny, poignant story.”
—
New York Times
and
USA Today
bestselling author Julia Kent

“This story has it all! Just like a mix tape; we get a dose of steamy romance, angsty ballads and sweet love songs woven together in a compelling, heartwarming and sometimes heart-wrenching journey of self-exploration.”—
New York Times
and
USA Today
bestselling author Helena Hunting

“
We Were Here
takes the characters we met in
Geoducks
and gives us their individual backstories in such a clever, engaging, emotional way. Set in the early 90’s, Prescott shares with us the tender, driven, hilarious, heart filled and hard college experiences.”—
Erika, Goodreads Reviewer

No part of this book may be reproduced or transmitted in any form without written permission from the publisher, except by a reviewer who may quote brief passages for review purposes.

This book is a work of fiction. Names, characters, businesses, organizations, places, events, and incidents are the product of the author’s imagination or are used fictitiously. Any resemblance to actual persons, living or dead, is entirely coincidental.

Melissa Ringsted,
There for You Editing

Interior Design and Formatting by:

Geoducks Are for Lovers

Confessions of a Reformed Tom Cat

A Note from Daisy Prescott

texting involved paper and a pen . . .

Sex was dangerous, music was raw, and falling in love felt nostalgic.

We were friends and lovers.

We thought we knew everything.

Set in the early 1990s, a time before the internet, social media, and smart phones,
We Were Here
is the prequel to
Geoducks Are For Lovers.
This book can be read as a standalone.

Thanks for all the memories.

“The past is never dead. It’s not even past.” William Faulkner

“Don’t You Forget About Me” ~ Simple Minds

“DID OWEN INVITE
you to the screening?” Quinn drops his backpack next to Maggie’s chair.

We’re sitting around our table in the dining hall in Evergreen’s student union, aka the college activities building everyone simply calls the CAB. Thursdays are the only day our schedules align for lunch this quarter. Typically, we take advantage of the time to catch up and plan for the weekend.

Before I can protest, Quinn steals half of my sandwich and has most of it stuffed in his mouth in a single bite.

“He did. I think he got us all.” Maggie swats his hand away from her Diet Coke.

“Are we going?” Jo leans in front of Ben to see the rest of the group, but he barely notices because his head’s stuck in a finance book. He’s studying for business school non-stop these days even though he’s already been accepted to Harvard.

“Do we have to? I’m not sure I’m ready to see my freshman self again. It’s too soon.” Selah’s hair has changed more than anything else over the past four years. Currently, it’s in a shaggy, punk rock pixie cut.

“We promised when we signed up we’d see it through to the bitter, bitter end.” Quinn grins at her scowl.

“We were freshmen when we agreed to be filmed every year for his documentary. I was barely eighteen and hadn’t voted in a presidential election yet. I believe that means I wasn’t an adult, and therefore incapable of giving consent.” Maggie picks at her salad.

“Come on, guys, think of how fun this will be. Our lives and friendships captured on VHS for eternity. Owen could become the next Spielberg and we’ll all end up in the Smithsonian.” Quinn’s blue eyes dance with dreams of fame and notoriety.

“What’s going to be fun?” Gil sits down at the far end of the table. Maggie’s glance flicks over to him for a second, then returns to her salad plate.

“The one we started as freshmen?” Gil shakes his head. “No way. Lived it. Don’t need to watch it.”

“Really?” Maggie focuses her attention on him.

“Don’t you remember my glasses?” He draws large circles around his eyes.