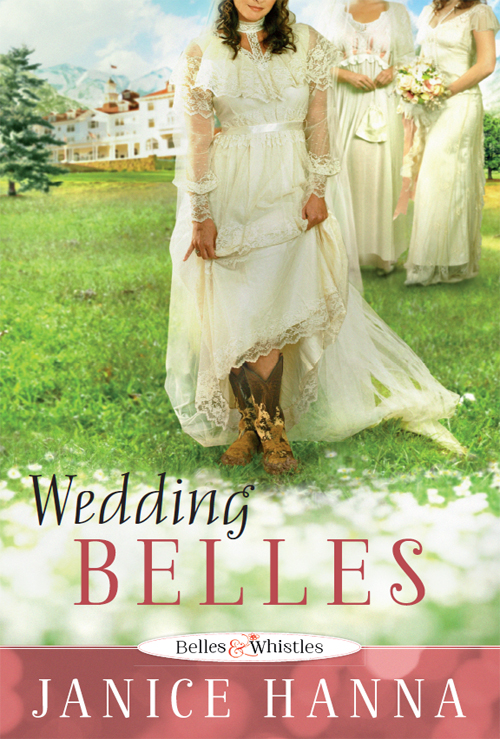 All rights reserved. No part of this book may be reproduced in any form, except for brief quotations in printed reviews, without permission in writing from the publisher.

The author is represented by MacGregor Literary Inc., Hillsboro, Oregon.

Summerside Press™ is an inspirational publisher offering fresh, irresistible books to uplift the heart and engage the mind.

To the wonderful folks at the Estes Park Museum. Thank you for your kindness and your book recommendations. You made my visit to Estes Park even more enjoyable! And to my “Dream Team.” You will never know what a blessing you’ve been in my life. My heart and prayers are with you all.

I’m pressing on the upward way
,

I want to scale the utmost height

And catch a gleam of glory bright;

“Lord, lead me on to higher ground.”

Lord, lift me up and let me stand

By faith on heaven’s tableland;

A higher plane than I have found,

Estes Park, prepare to be razzle-dazzled! Parker Lodge, located on the beautiful Fall River, continues to offer the best entertainment in town. This month’s event is certainly no exception. Join us this coming Friday evening, April 26, for a rousing performance by local musician Jeb Otis, who will play several well-known ballads and folk tunes on his saw. Otis, who hails from the Estes Valley region, will be appearing at the lodge for one night only, performing before a packed house. C’mon out and share in an evening of fine food, rousing entertainment, and heartfelt fellowship. Front-row seating for the first ten guests to arrive.
—Your friends at Parker Lodge

“J
EB
O
TIS SAYS
he’s going to jump off Longs Peak and end it all.”

“What?” Lottie Sanders looked up from the rippling waters of Fall River into her boss’s worried eyes. “He’s going to end it all? Why-ever would he do that?”

“Oh, you know how he is.” Gilbert Parker plopped down next to her and sighed. “Melodramatic. Always wanting attention. Just like the other men in this town. He’s frustrated because the Widow Baker won’t give him the time of day, so I guess this is how he plans to remedy the problem.”

“He’s going to remedy the problem by taking his life?” Lottie swallowed hard. “Won’t that defeat the purpose?”

“Who knows?” Gilbert offered a little shrug, and a hint of a smile turned up the edges of his lips. “But if it’s any consolation, I reminded him that he’s got a concert coming up this Friday evening, so maybe he’ll wait till after that to do himself in.”

“One can hope.” Lottie thought about the many times Jeb and the other fellas who frequented the lodge had posed such ludicrous threats. How weary she’d grown of their antics. “What’s it going to take to convince Jeb that he and Althea Baker are as different as night from day, anyway?” she asked. “They would make a terrible match. I’m surprised he can’t see that for himself.”

“True.” Gilbert released a sigh. “But I guess it’s true what they say—love is blind.”

Lottie dipped her toes into the cool water and gazed up at the majestic Rockies still capped with snow, even this late into the spring. They provided just the right distraction from the handsome young man to her left, though she would much rather stare into Gilbert’s beautiful blue eyes any day of the week. Not that she would ever come out and say so, of course.

“I know Jeb is just blowing off steam.” Gilbert smirked. “Otherwise I’d be plenty worried. But we both know he’s had his heart set on marrying for years now and is starting to feel…”

“Desperate?” Lottie turned her attention to Gilbert’s handsome face, her heart rate skipping to double time. If anyone understood desperation, she did. Hadn’t she waited a lifetime for Gilbert Parker to notice she was alive? Still, no one saw her jumping off a mountain peak, now, did they? No, sir. She would remain his faithful employee, calm and composed, no matter how badly her heart longed for more.

“Yep.” He nodded. “Guess so. Seems like a lot of the fellas round here are losing heart.”

They’re not the only ones.

“Just sayin’ we’ve got a lot of men bordering on grumpy because they haven’t found wives. Wish I could think of some way to help ’em out. You know what I mean?”

“Wait…” Lottie startled to attention as she realized what he was getting at. “Are you talking about finding brides for them? Is that what this is all about?”

“It wouldn’t hurt to see them happily matched,” he responded. “And Estes Park could certainly use more women. How is the lodge ever going to sustain itself if we don’t get more people coming through?”

Worry lines appeared on Gil’s forehead. “You know how concerned I’ve been about keeping the lodge open since Pa died. If we don’t come up with a plan soon, I’ll have to close up the place for good. Mama will be devastated if that happens, and she’s already going through so much. This lodge is my pa’s dream, and she wants to keep it alive.” Gil raked his fingers through that thick blond hair of his, leaving it in a disheveled state. “I’ve got to admit, these days, the dream is looking more like a nightmare.”

Lottie did her best not to sigh aloud as she pulled her feet from the water. In the three months since Gilbert’s father had passed away, their spirits were lower than ever. She’d tried everything imaginable to bring in customers, hoping to turn things around, but so far to no avail. “I’ve given you all my best ideas—oyster suppers, Saturday night dances, pie-eating contests, horseback-riding expeditions, talent extravaganzas, flower shows…. We’ve tried everything to bring in visitors to the lodge.”

She’d grown weary with it all, especially the dances, where more often than not she spent her evenings kicking up her heels with the wallflowers. Oh, how she wished that, just once, Gilbert would sweep her into his arms and waltz her across the room. Wouldn’t that be lovely? Perhaps her thoughts would be freed up to think of other ideas to save the lodge, if only he would tease her with a dance.

A silence grew between them. Lottie squinted as ribbons of sunlight filtered through the trees, grateful for the distraction.

“I still say the problem is the lack of women,” Gilbert said after a moment.

She gazed at his messy hair, wanting to reach out and fix it but not having the courage. “We’ve got plenty of women in town,” she argued. “What about the Estes Park Women’s League?”

“Most of those ladies are already married. I’m talking about new women. Fresh women.” His cheeks turned red and he looked a bit flustered. “Well, not
fresh
, exactly. You know what I mean.”

“I do.” She bit back the laughter that threatened to erupt. “Just wait until the summer, Gil. We’ll have quite a few new ladies come through. You’ll see.”

“Yes, the tourists stay for the season, but then they always leave again and go back to wherever they really live. They won’t stay. We need women with staying power.”

She felt her concern growing. If a passel of beautiful women came through, one of them would surely steal Gilbert away. Not that Lottie had any chance of winning his heart, regardless. He never seemed to think of her in that light.

Perhaps this would be the perfect time to drop a few hints. “
I’ve
stayed,” she whispered.

“Yes, you have.” Relief swept over his face. “And have I mentioned how grateful I am for that? When your sister moved away to Denver, I felt sure you would…” His words trailed off.

Ah. So
that’s
what this was all about. He was still pining away for her older sister. Well, so be it. Let him mourn. At Mama’s nudging, Winifred was happily courting a business tycoon from Denver now and couldn’t be bothered with the likes of Gilbert Parker. Not that she’d ever paid him any mind. No, she’d been content to flirt and tease and then break his heart in the end.

“Anyway, I felt sure you would eventually go away too,” Gilbert said, his eyes now riveting into hers. “Promise me you won’t ever leave.”

A wave of compassion swept over Lottie as she took in the sadness in his expression. “I can’t imagine leaving Estes Park. I’ve spent my whole life here. I don’t care where that silly sister of mine ventures off to or how much money her potential husbands might have. I love it here. Always have. I love every single thing about it, Gilbert. Every. Single. Thing.”

There. Surely he would take the hint. She batted her eyelashes, just in case he missed the point.

Gilbert shrugged but didn’t respond. Instead, he turned toward the river and sighed. Lottie forced her gaze back to the mountain, determined not to let him see the disappointment on her face. “Anyway,” she managed, “I don’t think Jeb and Althea are a good match, but who am I to talk of love and romance? I know nothing of such things. Maybe if Jeb would stop beatin’ that devil around the stump and ask Althea to marry him, she might just say yes. Then he could lay his miseries to rest once and for all.”

“He’s tried a thousand different ways to propose, but she’s not bitin’. You know that.”

“So he’s jumping off Longs Peak?” Lottie spoke the words matter-of-factly, as if men jumped off Longs Peak every day, just for the fun of it. “That’s his answer to the problem?”

Finding Alice (Alice Clark Series) by DiGiglio, Andrea
Arthur Rex by Thomas Berger
The Summer of Me & You by Hachton, Rae
Jennifer Crusie Bundle by Jennifer Crusie
The Spanish Billionaire's Hired Bride by Rachel Lyndhurst
SCROLLS OF THE DEAD-3 Complete Vampire Novels-A Trilogy by Mosiman, Billie Sue
An Improper Wife by Tarah Scott and KyAnn Waters
Foxcatcher: The True Story of My Brother's Murder, John du Pont's Madness, and the Quest for Olympic Gold by Mark Schultz, David Thomas
iPad Pro for Beginners: The Unofficial Guide to Using the iPad Pro by Scott La Counte
The Winter's Tale by William Shakespeare
Our partner