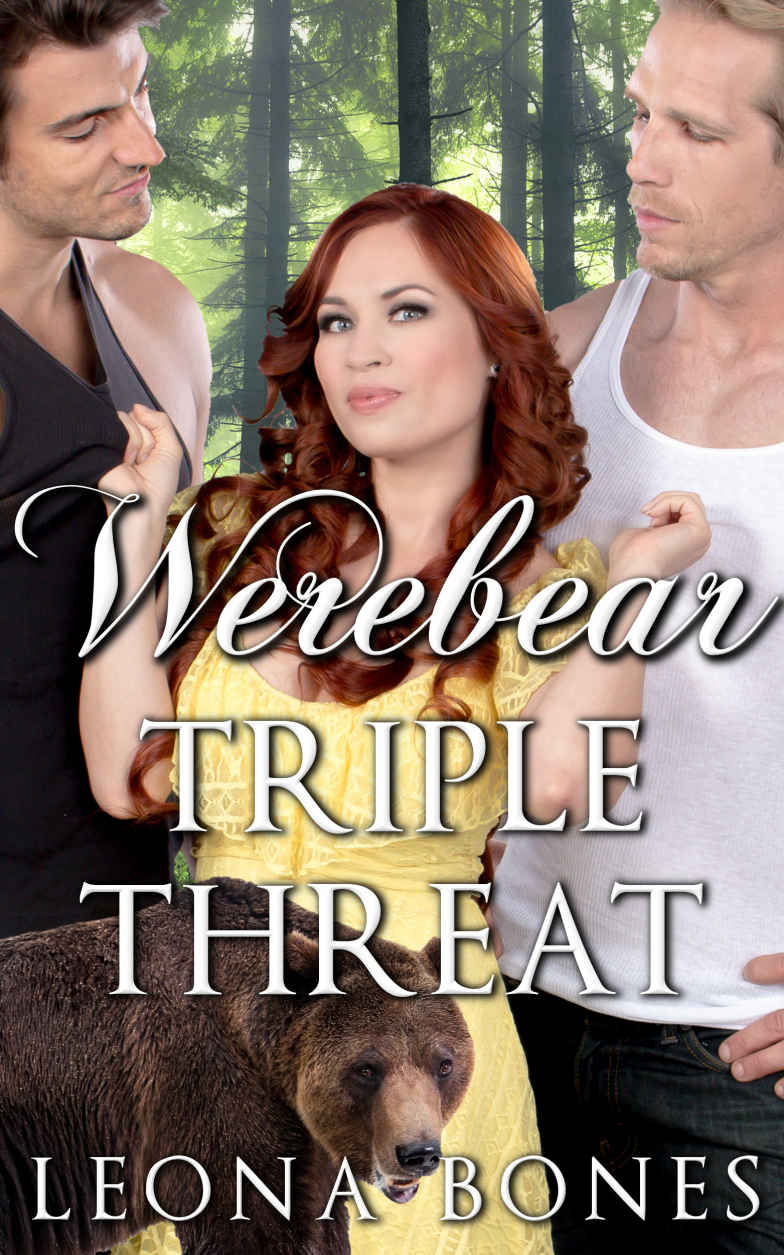 As the moon rose high in the sky and beamed its cool radiance down into the cave, Harper found herself surrounded by not three men, but three bears.

Werebears
, she corrected herself.

They approached her slowly, their warm muzzles rubbing against her goosebumped flesh. She looked into Bran’s eyes, seeing the same conviction, curiosity, and was that even…desire? Harper’s mind reeled as the bears closed in. She should have been scared. She should have been running for her life.

But doing what she was supposed to be damned.

Every cell in her body seemed to sing at the presence of the bears around her, skin pulling and tugging as she felt a gnawing in her chest. Something in there was trying to
get out
. It should have been crazy, and maybe it was, but she felt for the first time something inside of her telling her this was finally where she belonged.

But could these three bears – these three
pack brothers
– ever come to accept her? Even if they said she was one of them, surely there were others as well. Some kind of pack ordering, perhaps. They were being nice in memory of her father, but there was no way they’d actually want to be with her
like that
. Besides, there were three of them, and one of her. It would be unfair to choose…

Harper held the keys in her hand, the metal jingling as it unlocked the old rusty lock. With a slow creak, the door swung open, and there it was. “It’s all yours,” her father’s voice rung in her head, giving her the keys to his old cabin in the woods in the last minutes before he died. She’d hardly known he had a cabin in the woods, much less that he’d give it to her. Sure, he went out on hunting trips sometimes, but hunting had never interested her much, so she stayed at home. Killing animals seemed repulsive, and she’d always had a penchant for animals in other ways.

Now she stood on the threshold of her father’s cabin, and he wasn’t at her side. Harper sighed, stepping into the house.
Always thought he’d be with me if I ever came up here
, she thought, looking around at the house. He hadn’t been here in months, as far as she knew, and yet the house seemed well maintained, as if someone had come through only yesterday.

Leaning back, Harper stared at the ceiling, and then closed her eyes. It had been a long day, and the sun felt really nice…

Suddenly, Harper jolted awake by a knocking at the door. It sounded urgent. She flailed from the chair, rubbing her eyes. One moment she’d been sitting here thinking about her father and the next she’d fallen asleep! Well, that was one thing people had always said about her. She could sleep through anything. Remembering the books before, they struck a memory in her head: “
you sleep like a bear!”
It was all a joke when they’d said it, but with all the books she’d found on the shelf and the strange cabin in the woods, she began to wonder if it meant something else after all.

The knock came again, and Harper got up to answer it.
No idea who it could be at this hour
, she thought, but strode to the door anyway. As far as she knew, no one even knew she was here. But then again, she thought, looking around, maybe someone else had been sharing the house with her father.

There was a completely nude man standing at her doorstep.

Harper shook her head a bit, wondering if she was still dreaming. He looked like the men in her dreams – tall, dark, and handsome. His skin was stretched taut over bulging muscles and the lines of his body were perfectly proportioned, like he was a statue. Given that he was nude, she couldn’t help looking down, and…oh my. This random naked man definitely didn’t disappoint in that department. Harper smiled a little to herself, putting a hand to her head.
Okay, now I’m definitely dreaming
.

If I’m dreaming, though, no shame in fantasizing a little
. She could just imagine those strong arms holding her down, his massive frame hovering over her, his cock spearing her in two…her pussy clenched at the thought, and suddenly she felt too hot all over, the arousal making her flushed and a little breathless.

The smile on her face turned quickly to a gasp when she saw his cock hanging between his thighs twitch in response to her gaze, sending a shock of pleasure straight between her own legs. Bringing her eyes back up to his face with a rush of blood to her cheeks, she noticed the man’s face was stunningly handsome as well. He wore an unreadable expression – something between confusion and amusement. His body was covered in small black curls of hair, and his head was no exception. A bushy beard filled out his face, making him look exceptionally manly. His eyes were searching, hard, and a steely shade of grey. Harper narrowed her eyes, staring into the orbs for a moment. So fast she wasn’t sure if she imagined it, they flashed a brilliant shade of gold for only a second.

“What are you doing here?” The voice brought her out of her fantasies.

“You sure about that?”

“I’m going to have to ask you to leave.”

Harper put her hands on her ample hips, indignant.
Just who did he think he was?
“Excuse me?” She asked, tilting her head in challenge. “As far as I can tell, you’re the intruder here.”

The man looked annoyed, running a hand through his curls. “Ah, woman. You don’t know. You don’t belong here. Now go before I say anything about it to my clan.”

Clan? Dude had a clan? Oh, come on now. What could possibly happen—

Harper stopped in her tracks, fear tracing a web of adrenaline through her cells as she pointed a shaking finger at the bears behind him.
No one had said there’d be bears!
Her heart beat at the prospect, and at how close they were. She’d never known bears would get so close to a human, and if they did…Harper gulped. She was going to get mauled by a bear, wasn’t she?

“B-bear…” she croaked, staring at the two hulking frames behind him.

“That’s right woman, these are my people.”

Bears? Just what was he talking about? Dude had to be crazy
. He was a human, not a bear.

“Just leave me alone!” Harper yelled, backing away slowly. “I own this house now! Take your…bears and go!”

“I can’t do that. This belongs to my people too, you know.”

“My father gave this to me! It’s in his will! Look!” She shoved the paperwork at him frantically. As if showing legal paperwork would sway a man who thought he was a bear.

He took the paper, holding it gingerly in his large hands. Suddenly, something changed. His eyes grew wide, and Harper could almost see a flash of gold within them again. The man spoke slowly, carefully.

“Your father is Evan Stone?”

“Of course he is. Now see, its legal paperwork, and I’m sorry to tell you, but he’s dead now. Saw it myself. He handed this to me as he died, so unless you want to disrespect a dying man’s wishes, go now and leave me be.” Harper felt on the brink of tears. She was trying to deal with the death of her father and this strange new place, and some naked guy had to come and insult her over it? What did it matter if he
was
extremely sexy…

The man looked back to the bears behind him, nodding to them. He exhaled a long breath. “Well, this changes everything. Come along.”

“Come along? Where? I’m staying here, thank you very much.”

“Listen, woman. It may not be…” he looked around warily. “…safe if you’re here alone. And besides, there’s some things you need to know.”

Harper gazed up at him, part of her wishing that he was right. She was curious – she wanted to go with him, but who knew what would happen if she did. Her mind flitted back to the books about bears again.
What if my father had known these…men?

“I knew your father,” said the man in the doorway, almost in response to her thoughts. “He was a good man, and we worked closely with him. It is a tragedy to hear of his death. But I sense, Harper, that there were things he was not telling you. Come with us, and find out.”

Chills like ice water ran down her spine.
I hadn’t told him my name… Was it all really true then? Did he know my father?

“He talked about you a lot, you know. I’m sure he would have wanted you to trust me. Even if you didn’t know about it, we were great friends.”

“Why didn’t he ever tell me about you, then?”

“It’s…complicated, Harper. But please, you have to understand that he wanted nothing more than to protect you.”

“I can protect myself, thank you very much.”

“Listen...do you want to find out the truth, or not? You can stay here if you wish, I won’t make you come along. But know that you made that choice.”

“Good choice,” said the men, smiling broadly. “And by the way, you can call me Bran.”

“Bran,” Harper repeated, tasting the way his name fluttered across her tongue. And with that, he took her hand, and they were off.

Finding June by Caitlin Kerry
Stray by Erin Lark
Since the Layoffs by Iain Levison
Find Me If You Dare (Dreamcatcher Book 2) by Vicki Leigh
The Retribution of Mara Dyer by Michelle Hodkin
Autumn Leaves by Winkes, Barbara
Gunner Kelly by Anthony Price
Trouble in the Town Hall by Jeanne M. Dams
Liberty (Flash Gold, #5) by Lindsay Buroker
Sweet Cravings by Elisabeth Morgan Popolow
Our partner