Read What He Reveals (What He Wants, Book Eight) (An Alpha Billionaire Romance) Online

What He Reveals (What He Wants, Book Eight) (An Alpha Billionaire Romance) 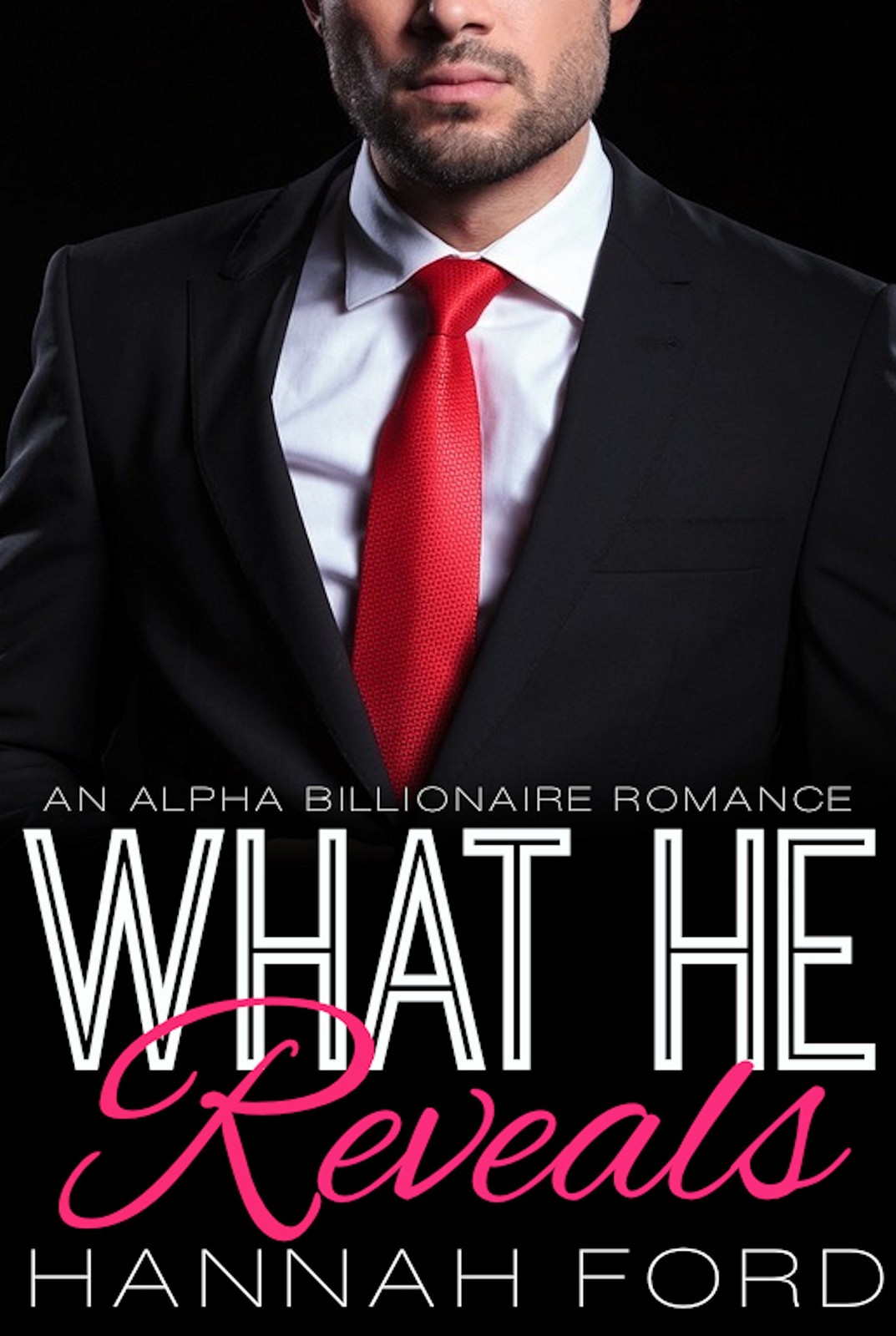 WHAT HE REVEALS (WHAT HE WANTS, BOOK
EIGHT)

This book is a work of
fiction, and any resemblance to any persons, living or dead, is entirely
coincidental.

It pushed forward like a dark wave,
threatening to overtake the carefully constructed wall that surrounded me.

I wanted to take back
ripping our contract up in a fit of anger and hurt that was more befitting of a
wounded boy than a grown man.

But
of course taking it back was impossible.

Regret was not an emotion I was familiar
with -- I’d found it served no purpose. Once something was done, there was nothing
you could do to change it.

Regret
and disappointment did nothing other than make you feel badly about yourself,
make you second guess every choice you’d made, cause you to wonder if perhaps you
were damaged or defective in some way in order to have done whatever the thing
was you regretted.

I had enough self-loathing inside of me
to last a lifetime.

I didn’t need to pile on more.

However, for the briefest of moments
after Charlotte walked away, I allowed myself to
feel
the disappointment that washed over me.

Although perhaps allowed wasn’t the
right word – I was powerless to stop it.

Why had I done that?

Because
you wanted to hurt her.

Why would I want to hurt her?

Because
she hurt you by not trusting you.

It was shameful, to lash out the way I
had, to hurt the woman I was falling in love with.

And when she turned and ran out of the
room, my heart split in two.

It
was a feeling so deep and profound, I’d almost forgotten I could feel anything that
was so immediate, so real.

I called after her.

But she didn’t respond.

She kept moving, out the door and into
the club.

I went after her.

But the slave auction was starting, and
the men in the club were getting riled up, waving money in the air, yelling out
bids.

The music pulsed and the
lights swung over the crowd, flashing rhythmically, making it almost impossible
to see anything.

I caught a glimpse of her long dark hair,
and I called her name again, but either she didn’t hear me or she didn’t
care.

And then she was swallowed
up in the crowd, disappearing into a throng of sweat and masks and desire.

I became almost crazed at the thought of
her being alone in this
place,
this place I’d brought
her even though I knew it wasn’t good for her.

I’d done it just to prove a point, to show her I was in control, that if
she thought she was going to be able to hide something from me, she was wrong.

My pride and my demons had put her at
risk.

If anything were to happen to her, I
would never forgive myself.

I would find her.

I would make sure she was safe and get
her out of here.

And then I would stay away from her.

I was too damaged.

And if she stayed with me, she was going
to get hurt.

My heart ripped again at the thought of
not having her, of not talking to her, holding her, dominating her, loving
her.

But I reached deep into
myself and stitched it back together.

The only thing worse than losing her was
destroying her.

And if I stayed with her, that’s exactly
what I would do.

My screams echoed through the room before
bouncing off the cements walls and coming back to me, almost like a
boomerang.

Through the light that
was filtering through the open door, I could see a dirty light bulb hanging
from the ceiling.

The man who’d opened the door

-- Audi James -- stepped inside and shut
the door behind him.

The room was thrown back into darkness,
and I struggled to my knees, trying to stand up.

It was hard to do while being handcuffed.

The metal bit into my wrists and threw
me off balance, making it impossible to stand.

Not that it really mattered.

I wasn’t sure what I was going to do even if I somehow
could
stand up – I was handcuffed, and
even if I wasn’t, Audi James was twice my size.

I had no weapon, no escape route,
no
way to protect myself.

I had no
idea where my cell phone was – it had been lost somewhere while those men
had been carrying me here.

I
didn’t remember if I’d dropped it, or if they’d taken it from me.

The light clicked on overhead.

“You don’t have to be scared.

This is going to be just as you
imagined it would be.”

I didn’t know what he was talking
about.

He was obviously mad.

I took in a shaking breath and tried to
calm myself.

It was apparent my
screaming wasn’t going to help anything – this place was a complete maze,
and I’d heard people screaming and begging as I’d moved through it.

More screams weren’t going to alert
anyone that I needed help.

No, I
needed to save my strength, and think about what I could do to get out of this
mess.

Audi James crossed the room and placed
the metal thing he’d been holding down on a dirty footstool that was sitting in
the corner.

It was a knife.

In the dim light, it didn’t shine as
brightly as it had in the hallway.

I was far enough away that I couldn’t be sure, but it looked like a
butcher knife.

The blade was sharp
but seemed almost darker than the rest of the knife, like perhaps it had been dulled
and then sharpened recently.

I wracked my brain for anything I could
use from all the case studies I’d read, anything where the victim had gotten
away from a captor.

I remembered a
case from Georgia, where a prisoner had escaped from a courthouse after killing
two police officers and a security guard.

He’d gone on the run, sparking a manhunt that spanned three
counties.

He evaded the police for
a while, then broke into a house and took a woman hostage.

She’d been held captive for five days,
knowing that he’d killed those people, knowing that the police were closing in
on him.

He’d had a gun and he was
desperate.

She’d been able to save
herself and convince him to turn himself in by talking to him, getting to know
him, making him connect with her.

Try
to make Audi see you as human,
I told myself.

“What are you doing?” I asked.

I tried to keep the fear out of my
voice, but it was difficult.

My
voice trembled and my whole body was shaking.

“Getting ready for the experience,” he
said.

He reached up and opened two
tiny trap doors that were built into the ceiling.

Two shackles dropped down, their chains clinking as they
fell.

Audi James turned to look at me, and I
forced myself not to look away.

His eyes seemed to turn to black as they met my gaze.

This
is what evil looks like,
I thought to myself.

“Why are you doing this?” I asked as he
walked over to me, the sound of his heavy work boots echoing off the concrete
floor.

The side of his mouth twitched for a second.

“Are you
gonna
be a screamer, Sweets?” he asked.

“Are you going to scream real loud for Daddy?”

He reached into his pocket and pulled out a piece of gum,
popped it into his mouth and chewed thoughtfully.

His eyes took me in, racking up my body, sizing me up.

“If you killed those girls, you should
turn yourself in.”

“I didn’t kill no girls,” he said, his
voice sharp with anger.

I can help you show everyone you didn’t
do it.

But first you have to let
me go.”

He grinned again,
then
leaned down so that his face was right up against mine.

His breath smelled like strawberry gum,
and even though it wasn’t an unpleasant odor, it made me recoil.

The next thing I knew, he’d picked me up
and slung me over his shoulder,
similar
to the way
those men had carried me through the club and to this room.

“You’re heavy,” Audi said, almost like he
was annoyed.

He set me down and
then pushed me up against the far wall, shoving his body so forcefully against
mine that the pressure was almost unbearable.

I turned my cheek and it pressed into the wall so hard my
teeth mashed against the inside of my cheek.

“They didn’t say you were heavy.”

“The men who brought you here.”

“Why would it matter if I’m heavy?”

I had no idea what he was talking
about.

I couldn’t even decide if
the things he was saying were of any importance, or if they were the mutterings
of a mad man.

“What costs extra?” I asked.

“I’m going to take your handcuffs off
now,” he said.

“I need to so I can
put you in the shackles.

You can
fight me if you want.”

He licked
his lips and leaned in close to me.

If it
turns you on.”

My eyes filled with hot tears.

It was no use.

He was out of his mind.

When I said it, I meant it.

But as soon as he’d taken me out of my
handcuffs, I kneed him right in the groin.

His hands dropped to cover the place between his legs and he
screamed in pain.

I didn’t
hesitate, moving quickly toward the door.

But he reached out and grabbed me.

He was bent over, and his hand tightened
around my ankle, causing me to go sprawling onto the ground.

My chin banged against the floor, and I
bit my tongue hard.

The bitter
taste of blood filled my mouth, and pain radiated through my jaw.

He reached down and picked me up around
the waist, this time not even trying to make sure he had a good hold on
me.

Instead he slammed me up
against the wall and forced my hands into the shackles.

He reached down and picked up his knife,
then began turning a metal crank that was sticking out of the wall.

At first, I wasn’t sure what he was
doing.

And then, very slowly, the
shackles on my arms started pulling me up toward the ceiling. And then I
understood.

He was going to string me up by my
arms.

At first, it would just be
tiring.

But if he kept going,
eventually my shoulders would become dislocated.

The pain would be unbearable.

“Please, you don’t have to do this.

Please, let’s talk about this.”

Red Dog by Jason Miller
Seducing Jordan: A Second Chances Novella by Andrea Dalling
Eleven Eleven by Paul Dowswell
5 Frozen in Crime by Cecilia Peartree
Storm by Danielle Ellison
The Great Fire by Ann Turnbull
The Con (Men Who Thrill Book 4) by Blue, Kaye
Against All Odds by DePrima, Thomas
Hot in Here by Sophie Renwick
UFOs Generals, Pilots, and Government Officials Go on the Record by Leslie Kean
Our partner