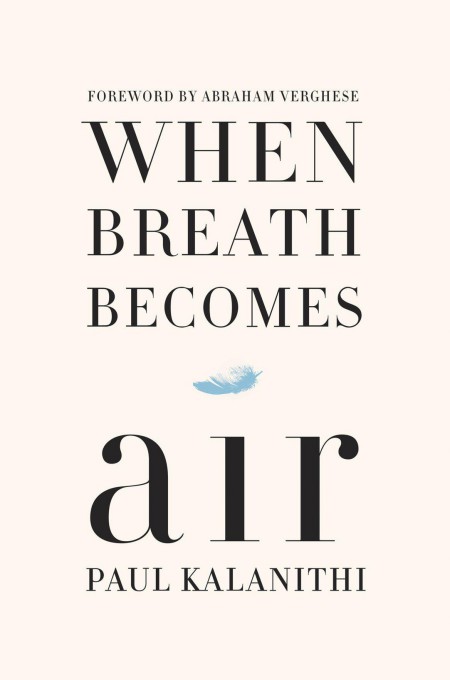 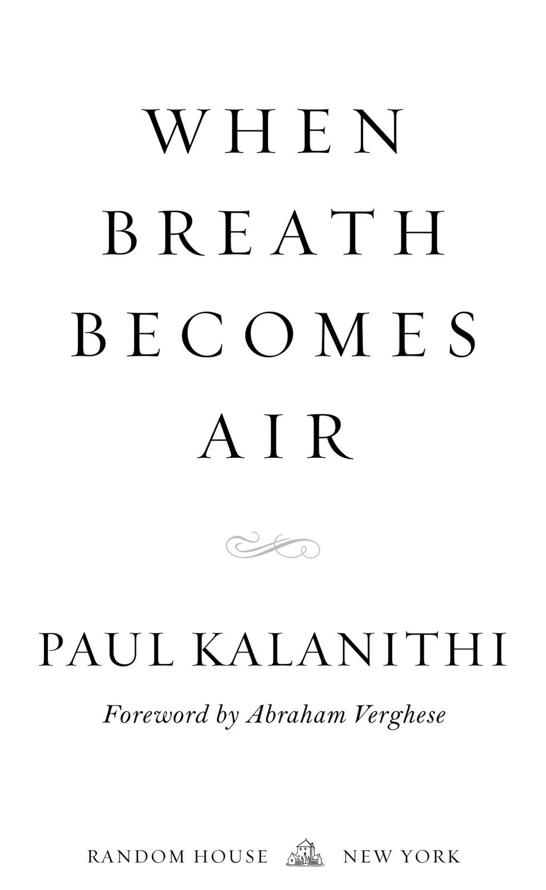 Published in the United States by Random House, an imprint and division of Penguin Random House LLC, New York.

Part I: In Perfect Health I Begin

Part II: Cease Not till Death

E
VENTS DESCRIBED ARE BASED
on Dr. Kalanithi’s memory of real-world situations. However, the names of all patients discussed in this book—if given at all—have been changed. In addition, in each of the medical cases described, identifying details—such as patients’ ages, genders, ethnicities, professions, familial relationships, places of residence, medical histories, and/or diagnoses—have been changed. With one exception, the names of Dr. Kalanithi’s colleagues, friends, and treating physicians have also been changed. Any resemblance to persons living or dead resulting from changes to names or identifying details is entirely coincidental and unintentional.

You that seek what life is in death,

Now find it air that once was breath.

Till time end bodies, but souls none.

Reader! then make time, while you be,

But steps to your eternity.

I
T OCCURS TO ME,
as I write this, that the foreword to this book might be better thought of as an afterword. Because when it comes to Paul Kalanithi, all sense of time is turned on its head. To begin with—or, maybe, to end with—I got to know Paul only after his death. (Bear with me.) I came to know him most intimately when he’d ceased to be.

I met him one memorable afternoon at Stanford in early February 2014. He’d just published an op-ed titled “How Long Have I Got Left?” in
The
New York Times,
an essay that would elicit an overwhelming response, an outpouring from readers. In the ensuing days, it spread exponentially. (I’m an infectious diseases specialist, so please forgive me for not using the word
viral
as a metaphor.) In the aftermath of that, he’d asked to come see me, to chat, to get advice about literary agents, editors, the publishing process—he had a desire to write a book,
this
book, the one you are now holding in your hands. I recall the sun filtering through the magnolia tree outside my office and lighting this scene: Paul seated before me, his beautiful hands exceedingly still, his prophet’s beard full, those dark eyes taking the measure of me. In my memory, the picture has a Vermeer-like quality, a camera obscura sharpness. I remember thinking,
You must remember this,
because what was falling on my retina was precious. And because, in the context of Paul’s diagnosis, I became aware of not just his mortality but my own.

We talked about a lot of things that afternoon. He was a neurosurgical chief resident. We had probably crossed paths at some point, but we hadn’t shared a patient that we could recall. He told me he had been an English and biology major as an undergraduate at Stanford, and then stayed on for a master’s in English literature. We talked about his lifelong love of writing and reading. I was struck by how easily he could have been an English professor—and, indeed, he had seemed to be headed down that path at one point in his life. But then, just like his namesake on the road to Damascus, he felt the calling. He became a physician instead, but one who always dreamed of coming back to literature in some form. A book, perhaps. One day. He thought he had time, and why not? And yet now time was the very thing he had so little of.

I remember his wry, gentle smile, a hint of mischief there, even though his face was gaunt and haggard. He’d been through the wringer with this cancer but a new biological therapy had produced a good response, allowing him to look ahead a bit. He said during medical school he’d assumed that he would become a psychiatrist, only to fall in love with neurosurgery. It was much more than a falling in love with the intricacies of the brain, much more than the satisfaction of training his hands to accomplish amazing feats—it was a love and empathy for those who suffered, for what they endured and what he might bring to bear. I don’t think he told me this as much as I had heard about this quality of his from students of mine who were his acolytes: his fierce belief in the moral dimension of his job. And then we talked about his dying.

After that meeting, we kept in touch by email, but never saw each other again. It was not just that I disappeared into my own world of deadlines and responsibilities but also my strong sense that the burden was on me to be respectful of his time. It was up to Paul if he wanted to see me. I felt that the last thing he needed was the obligation to service a new friendship. I thought about him a lot, though, and about his wife. I wanted to ask him if he was writing. Was he finding the time? For years, as a busy physician, I’d struggled to find the time to write. I wanted to tell him that a famous writer, commiserating about this eternal problem, once said to me, “If I were a neurosurgeon and I announced that I had to leave my guests to go in for an emergency craniotomy, no one would say a word. But if I said I needed to leave the guests in the living room to go upstairs to
write
…” I wondered if Paul would have found this funny. After all,
he
could actually say he was going to do a craniotomy! It was plausible! And then he could go write instead.

While Paul was writing this book, he published a short, remarkable essay in
Stanford Medicine,
in an issue that was devoted to the idea of time. I had an essay in the same issue, my piece juxtaposed to his, though I learned of his contribution only when the magazine was in my hands. In reading his words, I had a second, deeper glimpse of something of which there had been a hint in the
New York Times
essay: Paul’s writing was simply stunning. He could have been writing about anything, and it would have been just as powerful. But he
wasn’t
writing about anything—he was writing about time and what it meant to him now, in the context of his illness. Which made it all so incredibly poignant.

But here’s the thing I must come back to
: the prose was unforgettable.
Out of his pen he was spinning gold.

I reread Paul's piece again and again, trying to understand what he had brought about. First, it was musical. It had echoes of Galway Kinnell, almost a prose poem. (“If one day it happens / you find yourself with someone you love / in a café at one end /of the Pont Mirabeau, at the zinc bar / where wine stands in upward opening glasses…” to quote a Kinnell line, from a poem I once heard him recite in a bookstore in Iowa City, never looking down at the paper.) But it also had a taste of something else, something from an antique land, from a time before zinc bars. It finally came to me a few days later when I picked up his essay yet again: Paul’s writing was reminiscent of Thomas Browne’s. Browne had written
Religio Medici
in the prose of 1642, with all its archaic spellings and speech. As a young physician, I was obsessed with that book, kept at it like a farmer trying to drain a bog that his father before him had failed to drain. It was a futile task, and yet I was desperate to learn its secrets, tossing it aside in frustration, then picking it up again, unsure that it had anything for me but, in sounding the words, sensing that it did. I felt that I lacked some critical receptor for the letters to sing, to impart their meaning. It remained opaque, no matter how hard I tried.

Why, you ask? Why did I persevere? Who cares about
Religio Medici
?

Well, my hero William Osler cared, that’s who. Osler was the father of modern medicine, a man who died in 1919. He had loved the book. He kept it on his nightstand. He’d asked to be buried with a copy of
Religio Medici.
For the life of me, I didn’t get what Osler saw in it. After many tries—and after some decades—the book finally revealed itself to me. (It helped that a newer edition had modern spellings.) The trick, I discovered, was to read it aloud, which made the cadence inescapable: “We carry with us the wonders, we seek without us: There is all Africa, and her prodigies in us; we are that bold and adventurous piece of nature, which he that studies, wisely learns in a compendium, what others labour at in a divided piece and endless volume.” When you come to the last paragraph of Paul’s book, read it aloud and you will hear that same long line, the cadence you think you can tap your feet to…but as with Browne, you will be just off. Paul, it occurred to me, was Browne redux. (Or given that forward time is our illusion, perhaps it’s that Browne was Kalanithi redux. Yes, it’s head-spinning stuff.)

And then Paul died. I attended his memorial in the Stanford church, a gorgeous space where I often go when it is empty to sit and admire the light, the silence, and where I always find renewal. It was packed for the service. I sat off to one side, listening to a series of moving and sometimes raucous stories from his closest friends, his pastor, and his brother. Yes, Paul was gone, but strangely, I felt I was coming to know him, beyond that visit in my office, beyond the few essays he’d written. He was taking form in those tales being told in the Stanford Memorial Church, its soaring cathedral dome a fitting space in which to remember this man whose body was now in the earth but who nevertheless was so palpably
alive
. He took form in the shape of his lovely wife and baby daughter, his grieving parents and siblings, in the faces of the legions of friends, colleagues, and former patients who filled that space; he was there at the reception later, outdoors in a setting where so many came together. I saw faces looking calm, smiling, as if they had witnessed something profoundly beautiful in the church. Perhaps my face was like that, too: we had found meaning in the ritual of a service, in the ritual of eulogizing, in the shared tears. There was further meaning residing in this reception where we slaked our thirst, fed our bodies, and talked with complete strangers to whom we were intimately connected through Paul.

The Bar Mitzvah Murder by Lee Harris
The Natanz Directive by Wayne Simmons
Charles and Emma by Deborah Heiligman
A Game of Murder by Elise M. Stone
Miss Simpkins' School: Lydia by Raven McAllan
Mate of Her Heart by Butler, R. E.
An Inconvenient Friend by Rhonda McKnight
Elemental Reality by Cuono, Cesya
The Boy in the Lot by Ronald Malfi
Dark Homecoming by William Patterson
Our partner