When Patty Went to College 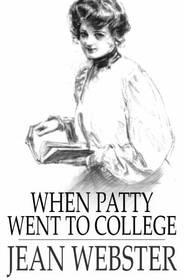 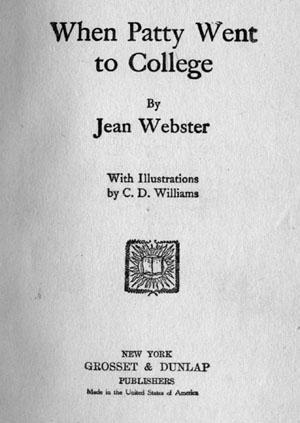 When Patty Went to College, by Jean Webster

The Project Gutenberg EBook of When Patty Went to College, by Jean Webster This eBook is for the use of anyone anywhere at no cost and with almost no restrictions whatsoever. You may copy it, give it away or re-use it under the terms of the Project Gutenberg License included with this eBook or online at www.gutenberg.org

Title: When Patty Went to College

*** START OF THIS PROJECT GUTENBERG EBOOK WHEN PATTY WENT TO COLLEGE ***

Produced by Bruce Albrecht, Emmy and the Online Distributed Proofreading Team at http://www.pgdp.net

When Patty Went to College

With Illustrations by C. D. Williams

TO 234 MAIN AND THE GOOD TIMES WE HAVE HAD THERE

PAGE I PETERS THE SUSCEPTIBLE 1 II AN EARLY FRIGHT 21 III THE IMPRESSIONABLE MR. TODHUNTER 39 IV A QUESTION OF ETHICS 57 V THE ELUSIVE KATE FERRIS 73 VI A STORY WITH FOUR SEQUELS 89 VII IN PURSUIT OF OLD ENGLISH 103 VIII THE DECEASED ROBERT 121 IX PATTY THE COMFORTER 133 X "PER L'ITALIA" 147 XI "LOCAL COLOR" 177 XII THE EXIGENCIES OF ETIQUETTE 203 XIII A CRASH WITHOUT 215 XIV THE MYSTERY OF THE SHADOWED SOPHOMORE 237 XV PATTY AND THE BISHOP 257

Men know such a lot about such things! 18

Mr. Algernon Vivian Todhunter, gingerly sitting on the edge of a chair 54

I have just run away from you, Bishop Copeley 266

"Paper-weights," observed Patty, sucking an injured thumb, "were evidently not made for driving in tacks. I wish I had a hammer."

This remark called forth no response, and Patty peered down from the top of the step-ladder at her room-mate, who was sitting on the floor dragging sofa-pillows and curtains from a dry-goods box.

"Priscilla," she begged, "you aren't doing anything useful. Go down and ask Peters for a hammer."

Priscilla rose reluctantly. "I dare say fifty girls have already been after a hammer."

"Oh, he has a private one in his back pocket. Borrow that. And, Pris,"--Patty called after her over the transom,--"just tell him to send up a man to take that closet door off its hinges."

Patty, in the interval, sat down on the top step and surveyed the chaos beneath her. An Oriental rush chair, very much out at the elbows, several miscellaneous chairs, two desks, a divan, a table, and two dry-goods boxes radiated from the center of the room. The floor, as it showed through the interstices, was covered with a grass-green carpet, while the curtains and hangings were of a not very subdued crimson.

"One would scarcely," Patty remarked to the furniture in general, "call it a symphony in color."

A knock sounded on the door.

A girl in a blue linen sailor-suit reaching to her ankles, and with a braid of hair hanging down her back, appeared in the doorway. Patty examined her in silence. The girl's eyes traveled around the room in some surprise, and finally reached the top of the ladder.

"My dear," murmured Patty, in a deprecatory tone, "I should have taken you for a senior; but"--with a wave of her hand toward the nearest dry-goods box--"come in and sit down. I need your advice. Now, there are shades of green," she went on, as if continuing a conversation, "which are not so bad with red; but I ask you frankly if
that
shade of green would go with anything?"

The freshman looked at Patty, and looked at the carpet, and smiled dubiously. "No," she admitted; "I don't believe it would."

"I knew you would say that!" exclaimed Patty, in a tone of relief. "Now what would you advise us to do with the carpet?"

The freshman looked blank. "I--I don't know, unless you take it up," she stammered.

"The very thing!" said Patty. "I wonder we hadn't thought of it before."

Priscilla reappeared at this point with the announcement, "Peters is the most suspicious man I ever knew!" But she stopped uncertainly as she caught sight of the freshman.

"Priscilla," said Patty, severely, "I
hope
you didn't divulge the fact that we are hanging the walls with tapestry"--this with a wave of her hand toward the printed cotton cloth dangling from the molding.

"I tried not to," said Priscilla, guiltily, "but he read 'tapestry' in my eyes. He had no sooner looked at me than he said, 'See here, miss; you know it's against the rules to hang curtains on the walls, and you mustn't put nails in the plastering, and I don't believe you need a hammer anyway.'"

"But," continued Priscilla, hastily, "I stopped and borrowed Georgie Merriles's hammer on my way back. Oh, I forgot," she added; "he says we can't take the closet door off its hinges--that as soon as we get ours off five hundred other young ladies will be wanting theirs off, and that it would take half a dozen men all summer to put them back again."

A portentous frown was gathering on Patty's brow, and the freshman, wishing to avert a possible domestic tragedy, inquired timidly, "Who is Peters?"

"Peters," said Priscilla, "is a short, bow-legged gentleman with a red Vandyke beard, whose technical title is janitor, but who is really dictator. Every one is afraid of him--even Prexy."

"I'm not," said Patty; "and," she added firmly, "that door is coming down whether he says so or not, so I suppose we shall have to do it ourselves." Her eyes wandered back to the carpet and her face brightened. "Oh, Pris, we've got a beautiful new scheme. My friend here says she doesn't like the carpet at all, and suggests that we take it up, get some black paint, and put it on the floor ourselves. I agree," she added, "that a Flemish oak floor covered with rugs would be a great improvement."

Priscilla glanced uncertainly from the freshman to the floor. "Do you think they'd let us do it?"

"It would never do to ask them," said Patty.

The freshman rose uneasily. "I came," she said hesitatingly, "to find out--that is, I understand that the girls rent their old books, and I thought, if you wouldn't mind--"

"It--it was a Latin dictionary I wanted," said the freshman, "and the girls next door said perhaps you had one."

"A beautiful one," said Patty.

"No," interrupted Priscilla; "hers is lost from O to R, and it's all torn; but mine,"--she dived down into one of the boxes and hauled out a chunky volume without any covers,--"while it is not so beautiful as it was once, it is still as useful."

"Mine's annotated," said Patty, "and illustrated. I'll show you what a superior book it is," and she began descending the ladder; but Priscilla charged upon her and she retreated to the top again. "Why," she wailed to the terrified freshman, "did you not say you wanted a dictionary before she came back? Let me give you some advice at the beginning of your college career," she added warningly. "Never choose a room-mate bigger than yourself. They're dangerous."

The freshman was backing precipitously toward the door, when it opened and revealed an attractive-looking girl with fluffy reddish hair.

"Pris, you wretch, you walked off with my hammer!"

"Oh, Georgie, we need it worse than you do! Come in and help tack."

"Hello, Georgie," called Patty, from the ladder. "Isn't this room going to be beautiful when it's finished?"

Georgie looked about. "You are more sanguine than I should be," she laughed.

"You can't tell yet," Patty returned. "We're going to cover the wall-paper with this red stuff, and paint the floor black, and have dark furniture, and red hangings, and soft lights. It will look just like the Oriental Room in the Waldorf."

"How in the world," Georgie demanded, "do you ever make them let you do all these things? I stuck in three innocent little thumb-tacks to-day, and Peters descended upon me bristling with wrath, and said he'd report me if I didn't pull them out."

"You've got enough to do if you expect to get settled by Monday," Georgie remarked.

"
C'est vrai
," agreed Patty, descending the ladder with a sudden access of energy; "and you've got to stay and help us. We have to get all this furniture moved into the bedrooms and the carpet up before we even
begin
to paint." She regarded the freshman tentatively. "Are you awfully busy?"

"Not very. My room-mate hasn't come yet, so I can't settle."

"That's nice; then you can help us move furniture."

"Patty!" said Priscilla, "I think you are too bad."

"I should really love to stay and help, if you'll let me."

"Certainly," said Patty, obligingly. "I forgot to ask your name," she continued, "and I don't suppose you like to be called 'Freshman'; it's not specific enough."

"My name is Genevieve Ainslee Randolph."

"Genevieve Ains--dear me! I can't remember anything like that. Do you mind if I call you Lady Clara Vere de Vere for short?"

The freshman looked doubtful, and Patty proceeded: "Lady Clara, allow me to present my room-mate Miss Priscilla Pond--no relation to the extract. She's athletic and wins hundred-yard dashes and hurdle races, and gets her name in the paper to a really gratifying extent. And my dear friend Miss Georgie Merriles, one of the oldest families in Dakota. Miss Merriles is very talented--sings in the glee club, plays on the comb--"

"And," interrupted Georgie, "let me present Miss Patty Wyatt, who--"

"Has no specialty," said Patty, modestly, "but is merely good and beautiful and bright."

A knock sounded on the door, which opened without waiting for a response. "Miss Theodora Bartlet," continued Patty, "commonly known as the Twin, Miss Vere de Vere."

The Twin looked dazed, murmured, "Miss Vere de Vere," and dropped down on a dry-goods box.

"The term 'Twin,'" explained Patty, "is used in a merely allegorical sense. There is really only one of her. The title was conferred in her freshman year, and the reason has been lost in the dim dawn of antiquity."

The freshman looked at the Twin and opened her mouth, but shut it again without saying anything.

"My favorite maxim," said Patty, "has always been, 'Silence is golden.' I observe that we are kindred spirits."

"Patty," said Priscilla, "do stop bothering that poor child and get to work."

"Bothering?" said Patty. "I am not bothering her; we are just getting acquainted. However, I dare say it is not the time for hollow civilities. Do you want to borrow anything?" she added, turning to the Twin, "or did you just drop in to pay a social call?"

"Just a social call; but I think I'll come in again when there's no furniture to move."

"You don't happen to be going into town this afternoon?"

"Yes," said the Twin. "But," she added guardedly, "if it's a curtain-pole, I refuse to bring it out. I offered to bring one out for Lucille Carter last night, because she was in a hurry to give a house-warming, and I speared the conductor with it getting into the car; and while I was apologizing to him I knocked Mrs. Prexy's hat off with the other end."

"We have all the curtain-poles we need," said Patty. "It's just some paint--five cans of black paint, and three brushes at the ten-cent store, and thank you very much. Good-by. Now," she continued, "the first thing is to get that door down, and I will wrest a screw-driver from the unwilling Peters while you remove tacks from the carpet."