Read When Work Is a Pleasure Online

When Work Is a Pleasure 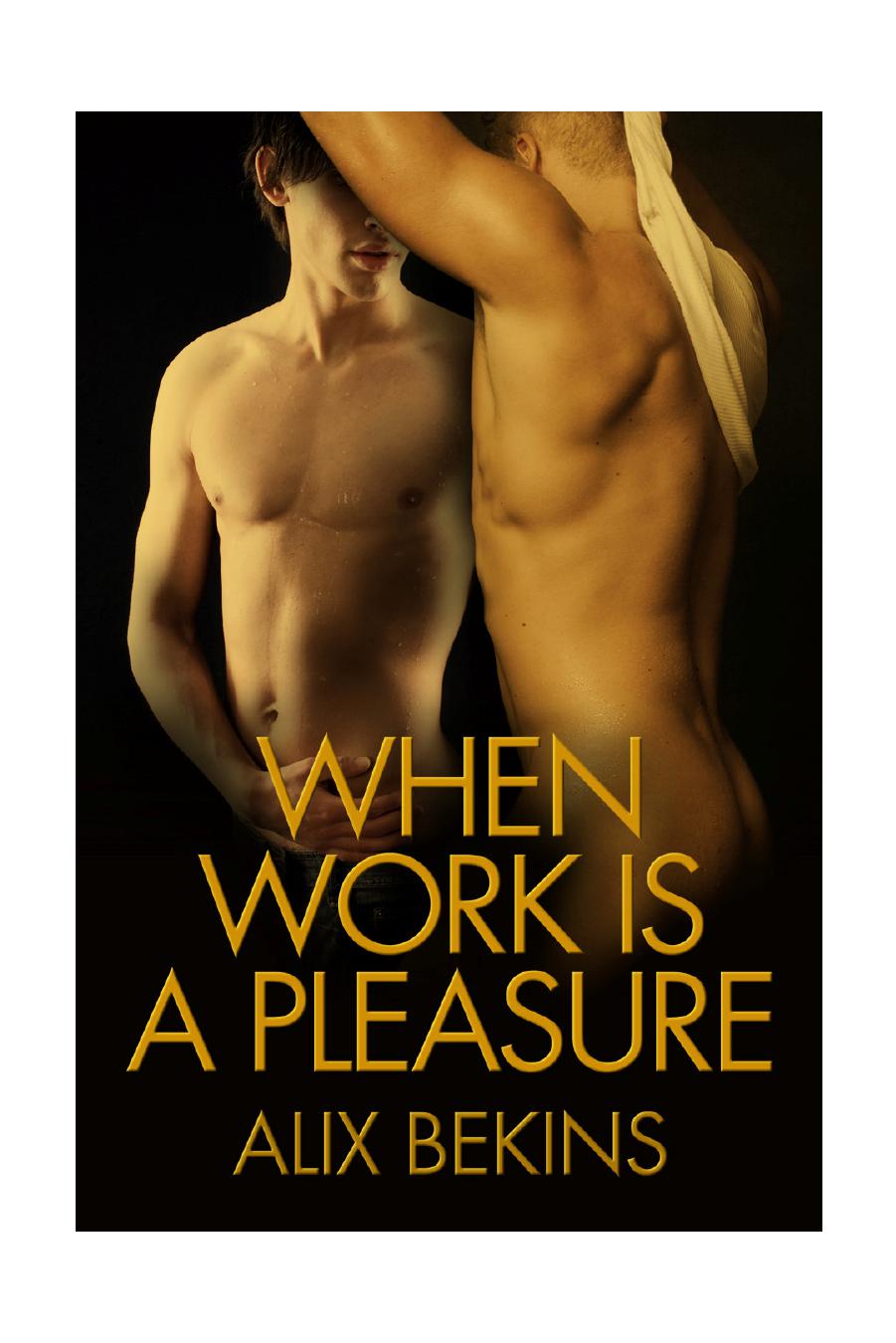 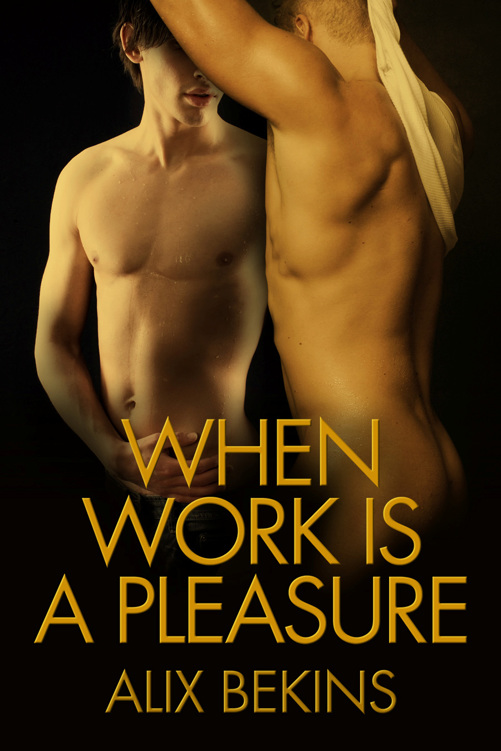 The darker guy looked like he was nearly the same size as Garrett, so it was easy to imagine that those were
his
hands on that tight ass sprinkled with freckles. The gorgeous blond was spread open, two fingers disappearing inside his hole and spreading lube around. Approving noises were muffled by the bald guy’s cock in the blond man’s mouth, but his expressive face clearly communicated his pleasure.

The newcomer shifted back, eager for more, making his When Work Is a Pleasure |
Alix Bekins

benefactor laugh and give his ass a light smack before lining up and sliding his impressive dick inside.

He watched for a while longer, before skipping through a couple of position changes, wanting to come when the blond guy did. He stopped near the end of the video. The blond was back on his knees, being fucked by the darker man from behind. The bald guy was laid out underneath the other two, sixty-nining. Garrett’s hands gripped his cock tighter, building up speed for the grand finale. His own harsh breaths nearly drowned out the other three—especially since two of them had their mouths muffled.

Abruptly the new guy pulled his lips off of the cock he was sucking, long fingers replacing them as his head fell heavily onto a welcoming thigh. He let out a groan that had Garrett squeezing his own cock hard, trying to hold back.

The dark man’s steady fucking never changed pace although his thrusts were visibly harder, deeper, making the blond swear and moan, “Yeah, yeah, now.” He hauled him up by one shoulder, wrapping a muscled arm around the newcomer’s waist to hold him upright. The contrast of the leaner body against the more muscular one made Garrett shiver.

dick and rolled out of the way, still jacking the newcomer off.

Less than a dozen thrusts from the darker guy and Mr.

Beautiful was coming, face twisted in gorgeous ecstasy as he shot all over the bedspread. The camera panned back to capture both rather than just focusing on the come shot like usual, and that did it for Garrett. The head tipped back in rapture emphasized the taut line of his throat, delicious tendons that Garrett wanted nothing in the universe more than to lick and suck and leave his mark on, right fucking
now
.

The darker guy gave another thrust and a final dribble leaked out of the newcomer’s cock at the same time that Garrett climaxed, soaking his hand and chest with a gut-deep groan.

As the sound faded out and credits started to roll, they got up from the bed and left the room, still touching and laughing.

Garrett wiped up with some tissues, put his clothing back to normal, and stopped the video. Eager to find out more about the hot newcomer, he clicked on a few links and settled in to watch the outtakes.

“Alec Greene” was the new guy’s name, and he laughed and kidded around with the other two as they waited, mid-fuck, while the lighting and camera guys moved around them to set up the best shots. The other two men Alec was When Work Is a Pleasure |
Alix Bekins

with were referred to as “Kent” and “Lance” as the unseen director told them to slow down, move a little to the right, lean back so the camera could get a better shot. Unlike most of the outtakes Garrett had watched, these guys were obviously friendly and at ease with each other, giggling like boys when one of them farted.

Kent teased Lance about eating too many beans, and Alec ribbed Kent about being over-eager and having to be told to slow down more than twice. Both teased Alec about being a virgin and having performance anxiety. The director yelled at them to shut up and get back to the action, albeit with humor in his voice.

Not that Garrett meant that in a bad way. Just that the guy liked sex, seemed like he really enjoyed what he was doing, as evidenced from the outtakes. One short moment at the beginning had included a bit of conversation between him and Kent, who was welcoming Alec and saying that he was glad Alec had finally agreed to join him and Lance and give filming a try. Alec had shrugged. “I get to fuck two hot guys I know. You’re both good in bed, and I like being watched. I can’t figure out why it took me so long to let you talk me into this,” he’d said with a grin.

BEHIND schedule for work the next morning, Garrett chugged his coffee in the elevator and rushed to his desk. He was about to be late for the monthly brainstorming session at the San Francisco office of
Queer America
, the magazine he wrote for. He powered up his computer, grabbed the notebook he kept story ideas in, quickly checked his mail to see if there was anything from his boss that he should know about before the meeting, and dashed to the conference room. He sat down on the far side of the table, the third person to arrive, and was coolly flipping through scraps of paper and Post-its when Jeff strolled in the door, closely followed by the other dozen or so editors and writers.

Awesome. No one knew he’d only been at the office for ten minutes instead of an hour.

he said, making a shooing motion with his hands.

Everyone started talking at once and the noise grew to cacophonous levels in moments. Sex, as always, got everyone’s attention.

Ellen said. “I think we should concentrate on that, work When Work Is a Pleasure |
Alix Bekins

different angles. Creation, distribution, consumption, workers. We’ll have to send a contingent down to L.A.”

“Folsom Street’s in three weeks—a lot of them will be up here, working the booths,” an intern pointed out.

Garrett raised an eyebrow; he’d had no idea the kid was even old enough to get past security at the fair. Well then.

Too bad he wasn’t into twinks; the kid was pretty, maybe a bit kinky, but still far too young. At twenty-three, Garrett made it a rule to never sleep with anyone who looked younger than he did.

Inspiration—in the form of a flashback to blond hair and green eyes and lush lips—hit. “I could call up a few of the studios with booths at the fair and ask if we could interview some of the workers and directors and stuff,” Garrett suggested.

Let’s not sugarcoat this, but let’s try to stay on the positive side.”

Back at his desk, he thought of green eyes again, gave his crotch a discreet rub, and picked up the phone.

IT CAME together so easily it almost had Garrett worried. He called his friend and got a list of the porno companies who had paid for booths at the fair. All he had to do in exchange was promise to bring beer and pizza to Chad’s house for the football game on Sunday. He researched the companies, got contact information for all of them, and agreements from all but one to let the magazine interview some of their directors and “boys.” Garrett hadn’t even had to bribe the other writers to let him have Hawk Studios, one of his favorites.

Garrett focused on the ones who had actual content in their blogs and e-mailed a few of them. One—“Carl”—looked to be pursuing a music career in addition to his “day job”

and had sparked some interesting conversation about the lyrics he posted. He certainly seemed like a real person, so Garrett e-mailed the address listed and got a reply back When Work Is a Pleasure |
Alix Bekins

within a couple of hours. Carl said he’d be more than happy to do an interview and even suggested that Garrett contact his friend “Kris,” “who never shuts up; you’ll get so much verbiage you could write a book, never mind a column for your magazine.”

Carl’s next e-mail invited Garrett to a kick-off party co-hosted by the Folsom Street Fair committee and a local safesex organization so he could meet face-to-face with the guys working at the booths and set up some interview times. And of course, he was welcome to hang out and party. Garrett had an idea of what kind of party it would be, and he was a little uncomfortable, but he said yes anyway. He’d been all-work-and-no-play for the last several months, ever since a bad breakup, and it would be good for him to break out of his shell. Maybe some high-spirited, raunchy fun was just what he needed.

(#20) The Clue in the Jewel Box by Carolyn Keene
Cast a Pale Shadow by Scott, Barbara
Also Known as Elvis by James Howe
CRAVED (By the Alpha Billionaire #1) by St. James, Rossi
The Memory Book by Howard Engel
Switched: Brides of the Kindred 17 by Evangeline Anderson
Return To Forever by James Frishkey
Louise Rennison_Georgia Nicolson 06 by Then He Ate My Boy Entrancers
Blood and Salt by Kim Liggett
A Busted Afternoon by Pepper Espinoza
Our partner