Read Where the God of Love Hangs Out: Fiction Online

Where the God of Love Hangs Out: Fiction 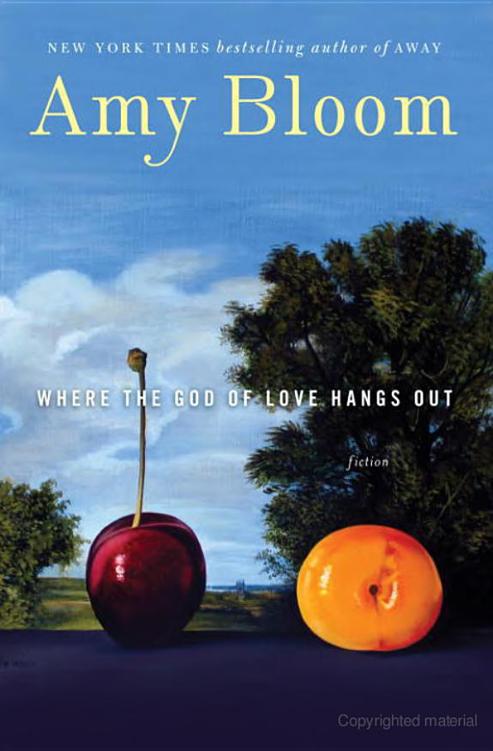 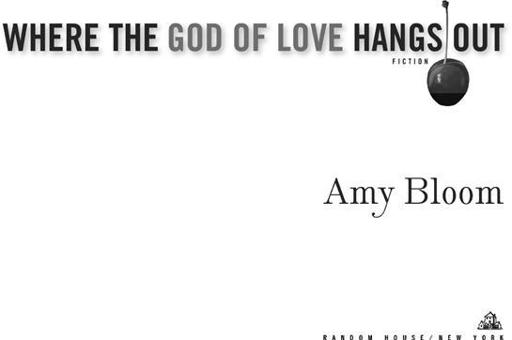 YOUR BORDERS, YOUR RIVERS, YOUR TINY VILLAGES

BETWEEN HERE AND HERE

WHERE THE GOD OF LOVE HANGS OUT

YOUR BORDERS, YOUR RIVERS, YOUR TINY VILLAGES

At two o’clock in the morning, no one is to blame.

We’d been watching CNN, one scene of disaster leading to the next, the reporter in front of what might have been a new anthrax outbreak giving way to the military analyst in the studio with new developments in Kabul, when William put his hand on my breast. My husband was asleep upstairs, dreaming of making the deal that would put us on high ground when the entire economy collapsed, and William’s wife was asleep in the guest room, getting her restorative eight hours. I think of Isabel as forcefully regular and elegant in all of her habits, and I’m sure she thinks of me as a little askew in all of mine.

William’s hand trembled slightly. Our two plain gold wedding bands twinkled in the light of the TV screen. He touched my breast through my bathrobe and my pajamas—I had dressed for watching TV with William as if for bundling—for a very long time. His touch, left forefinger on left nipple, through wool and flannel, should have been numbing in its dreamy repetition, but it was not; it captured my whole body’s attention. We kept our eyes on the TV. Finally, he fumbled under my robe and opened two buttons of my pajama top. His hand moved across my breast, and I sighed. I heard him breathing, hard and damp, and I put my hand on his big belly. It does not seem possible that we are people with three children, two marriages, and a hundred and ten years between us.

The first time I made out in a car, it was with Roger Saleta from Far Rockaway. We were trying to end the war in Vietnam by flooding the local draft board with mail and marching in front of it whenever our class schedules allowed. I had spoken at a big rally, wearing an electric-blue nylon halter top and my tight bell-bottoms with a crucified Jesus painted on the right leg. (I pretended not to know, and it may have been that I actually did not know then, why some people found this offensive. “I’m not mocking Jesus,” I told my mother. “I’m just representing him, on my jeans.”) Roger circled around the parking lot after the rally and offered me a ride in his gold Camaro. We drove to Jones Beach, miles from the protest, miles from social studies and home ec, and we stayed in the car while the waves crashed and we worked at each other. Hands and mouths. Necks and elbows. He licked me through my jeans until they were wet and dark blue from inseam to belt buckle. I wanted to bang my head against the back of the seat from pleasure, and dug my hands into his black curls instead. This boy, not my idea of a lover, not even my idea of a date, had my body humming, dancing its tiny, fierce dance in the backseat. His hands under me and his mouth shamelessly pressed against me, as if the rest of the world could sink into the ocean out there and we would not even blink, or maybe, yes, blink dully, just once, before we returned to the real world of my pussy and his mouth. Later, we went to his prom, and I saw that he couldn’t dance, which I hadn’t known, and that his eyes were much too close together, which I had known and ignored, and I was a big disappointment to him that night.

William whispered something to me, but they were showing night bombing in the north and I couldn’t hear him over the shouting correspondent. “May I?” he said again, and put his mouth over my nipple. William is English, and he has beautiful manners. He has never failed to open the door, to pull out the chair, to slip off the coat, to bring flowers and send thank-you notes. It is not an affectation. Charles, my husband, is the same way, and it’s not an affectation in him, either. They are both sons of determined English mothers and quiet American fathers who let their wives have their way. Charles and William are friends, Isabel and I are friends. It is all just as bad as it sounds. The close friendship has always been between me and William, from the moment we stood snickering together at that first faculty meeting until now. Everybody knows that William and I are, inexplicably but truly, best friends. I think his size and my shyness, and, of course, Isabel’s beauty and Charles’s good looks, gave us permission to love each other and hold hands in public, looking, I’m sure, like a woolly mammoth and a stiff-tailed duck, just that odd and just that ridiculous.

Even when they moved back to Boston after their one year in New Haven, back to his university and her real estate, we stayed friends. Isabel and I have had pedicures together, we’ve dissected our husbands and considered the possibility that a little collagen around the mouth might not be a bad idea. All four of us have sat at our kitchen tables, talking through their daughter’s suicidally bad time in Prague and our son Danny’s near-engagement to an awful girl from Bryn Mawr. I like that William is such a good storyteller; she likes that Charles is so clever with his hands. When we visit, she gives him a “Honey Do” list and he pops around their house with his toolbox all afternoon and Isabel follows behind, handing him nails and a caulk gun, while William and I play Scrabble. She used to asked me for advice on getting William to watch his weight, which I gave, which was useless, and I felt terrible for her. After his first heart attack, she called me in tears, and I thought, Well, of course he has got to exercise and drink less and stop smoking and cut out the bacon and if I were his wife I would have him on egg whites and a thimbleful of sherry, but I’m not. William called me from the hospital and said, “Please eat some butter for me.” We continued to meet at every intriguing restaurant he’d hear about, Abbott’s Lobster in the Rough, Ma Glockner’s for the chicken dinner, and we spent half a day finding a little place in Kent that had outstanding macaroni and cheese.

We’ve come to our quartet already grown up, with our longstanding convictions and habits and odd ways in place, and none of us has changed very much since we met. Isabel is much fitter and William is a little fatter and Charles dropped tennis for golf, coming home flushed and handsome, cursing cheerfully about his handicap and his stroke. Charles and William and Isabel e-mail one another news every day, and when we’re together, Charles and William watch CNN for hours, drinking their Guinness. They talk like they’ve just come from a meeting with the Joint Chiefs of Staff, and Isabel joins in, perching on the end of the sofa near William, clucking her tongue when the scroll at the bottom of the screen says:
AIR STRIKES HIT ALL AL QAEDA TRAINING CAMPS IN AFGHANISTAN … DURING THE RAID ON BEIT JALA, ISRAELI FORCES ARRESTED 10 PALESTINIANS AND KILLED 6
. I don’t know if she is clucking because six isn’t enough or because it is way too much. Isabel reads
The Wall Street Journal
and
The New York Times
every day and I don’t. It’s not as if I waltz around the homestead with a big bow in my blond curls, picking daisies and waiting for the grown-ups to sit down to the nice dinner I’ve made. I teach, I go to the movies, I talk to my grown sons frequently (Adam is a news-watcher, Danny is a news-avoider, and all that matters to me is that they both live in small, safe towns in the Midwest and neither has children). I don’t watch the news with my friends’ avidity; I have not constructed a mental map of Afghanistan so that I can track troops, bombs, and food drops, and I will not even discuss whether or not we should call Bobby Bernstein, Charles’s new golfing partner, and ask him for doxycycline.

“Let’s watch a bit of the news first,” William said. I made popcorn for later. We would sit with my feet in his lap, and he would ask for another beer and more salt, and I would get it. Then William would sigh with pleasure at having everything he wanted, and so would I.

The Appalachian Trail through New Jersey is like the road to hell. My boyfriend Danny and I slogged through swamp and low water, past dozens of orange blazes, which indicated not trail but possible paths through purgatory, until in the dark we found a flat, meadowy place. As soon as we stopped moving, mosquitoes descended upon us, attacking every moist, warm spot. They flew into our eyes, our mouths, our ears, burrowing through our wet, salty hair to our scalps. Trying to be quick in their buzzing black fog, we threw down our tarps and our sleeping bags and dove into them, clothes and boots still on. It was eighty degrees outside and per haps ninety-five in our sleeping bags, but the choice was to be bit ten all night or lie in pools of sweat until dawn. Danny zipped our bags together, and we rolled back to back, rank and itching and, as I recall, furious with each other—me because he had picked the trail into Rattlesnake Swamp, him because I laughed unkindly every time he unfolded our Sierra Club map that afternoon and said, “This looks right.” Just before dawn, the bugs disappeared to digest and rest up to prepare for the second wave. Danny, the gentlest of boys, willowy and devoted, slid on top of me, rolled my underpants down to my ankles with one hand, pushed my legs apart, and came into me like a stranger. We lay there, stuck together from hip to collarbone, faces turned away, until it was light enough to leave.

William said, “Come here, on top of me. Come sit on my lap, darling.” In six years, he has never called me anything but my name. Just one time, when we were chatting on the phone and his other line rang, he said, “Hold on a tick, dear.” I climbed up on him, just as he asked, and draped myself over his stomach, resting my face against his shoulder, kissing it through his shirt. I unbuttoned his collar and ran my fingers around his thick neck, into his hair and down through the gray hairs beneath his undershirt.

Say You Love Her, An L.A. Love Story by Z.L. Arkadie
Diary of Annie's War by Annie Droege
The Great Depression in United States History by David K. Fremon
Seven Dials by Anne Perry
Compliments of a Friend by Susan Isaacs
Soul to Shepherd by Linda Lamberson
Kingdom's Reign by Chuck Black
Forsaken by Kristen Day
One Pink Line by Silver, Dina
Fragrant Harbour by John Lanchester
Our partner