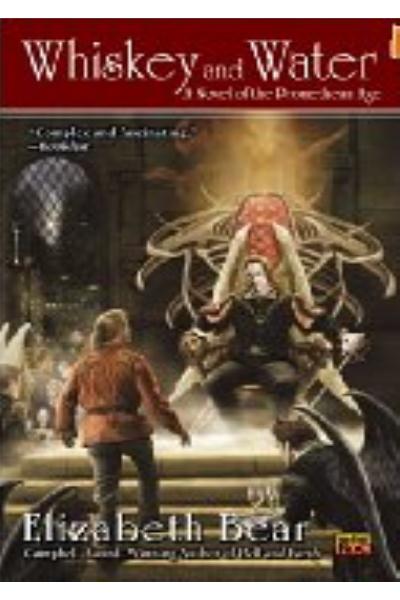 A Novel of the Promethean
Age

This book is for Hannah
Wolf Bowen, Whiskey's wicked stepmother.

I would very much like to
thank everyone who helped out, fielded questions, or listened to me complain
about this book. Especially but not exclusively, thanks go to Karen Junker for
authenticity checks on body modification practices; to Tobias Buckell and
Chantal McGee for assistance with Caribbean dialect; to Sherwood Smith for
master's classes in omniscient POV; to Lt. Ed Finizie, NLVPD, for vetting my
police procedures; to Abigail Ackland, the maintainer
of
www.tam-lin.org
(an invaluable resource for would-be balladeer-deconstructionists); to the
talented answerers-of-silly-questions—Amanda Downum, Hannah Wolf Bowen, Jaime
Voss, Nick Mamatas, Jenni Smith Gaynor, Nalo Hopkinson, Kathryn Allen, Lis
Riba, Chelsea Polk, and Sarah Monette—-who helped keep me looking smarter than
I am; to Kit Kindred and to my agent, Jennifer Jackson, for service above and
beyond the call; to Stella Evans, WD, for helping me manage the massive amounts
of medical background necessary for this narrative; to my copyeditor, Cherilyn
Johnson, for fixing my mistakes; and to my editor, Liz Scheier, the
unflaggingly meticulous —and encouraging.

O
nce upon a time in New York City, there lived a Mage
with a crippled right hand. Once he wore ten iron rings upon his fingers. Once
he had a brother. Once he had a calling. Twice, he touched a unicorn. Once upon
a time.

Streetlights might burn out in Matthew
Szczegielniak's presence, or dim and flutter dark for as long as it took him to
pass. Car alarms and stereos might deploy unexpectedly, computers crash, neon
signs flicker messages they were never meant to spell.

He knew they were trying to say something,
to play the oracle. But he understood only a fragment of what they told: that a
powerful shadow hung over him, that a powerful shadow lay cupped in the scarred
hollow of his claw-hooked hand. Beyond that, the signs were too wild for him to
read as he would have, once. Or to control.

It was a frustration so intense that the
only response he could manage was to kick it away, kick it aside, and carry on
as if nothing was wrong. You could learn to run on an amputated limb. If you
were stubborn enough. Adaptable enough. And didn't mind a little pain.

He wasn't mad, Matthew Szczegielniak. He
had been lucky to venture into Faerie and return sane—more or less—and lacking
only his good right hand. He taught his classes at Hunter College — British
Literature (one section general, one section Elizabethan Drama, one section
Elizabethan Drama and Poetry Other Than Shakespeare)—and he stayed away from
the students' laptops, and he practiced until the chalk and dry-erase scrawls
he wrought with his left hand formed words.

Matthew kept a magnetized iron knife in
his left front pocket and he wore a ring carved of rowan wood on his right
thumb. Ink in dark unsettling labyrinths marked his back and arms, and his
nape under the clean blond ponytail. He wore steel-rimmed spectacles that
twinkled compassionately when he tilted his head. He lived alone in a
half-remodeled apartment; someone else paid his bills.

The someone's name was Jane Andraste. She
was the former lieutenant governor of New York, and the only other Mage
Matthew knew of, anymore. All the rest were dead, and whether that was Matthew's
fault or Jane's, Matthew did not take her calls.

He ran in Central Park like a wild thing
and lifted iron weights as he always had — although it took some cleverness to
lash them into his right hand—but he no longer wore the iron rings on his
fingers and in his ear that once had drawn him to oppose anything Fae that set
foot on Manhattan. Iron and copper and bronze were anathema to Faerie. Matthew
would not permit himself to be enslaved to his tools again.

Once upon a time, he
bad
permitted.
It had cost him his duty, his honor, his brother, his heart's blood, half his
soul, control of his magic, and whatever faith he'd managed to preserve through
thirty-odd years of service. It had cost him the use of his good right hand.

Once upon a time.

Somewhere in Hell, a poet was packing his
bags. He wasn't particularly circumspect about it; the master of the house
would know of his actions, as Lucifer tended to know what concerned him, and so
the poet rehearsed arguments as he folded shirts and found his rapier and a
notebook. He didn't expect to be permitted to leave without some sort of
confrontation.

All the same, he packed only what he'd
need for a day or two. He could send for the rest, once—
if
—he got
settled somewhere. And if the Devil proved recalcitrant, well. It wouldn't be
the first time the poet had lost everything.

Things were only that.

He was pulling the drawstrings of his
rucksack taut when a rustle of feathers by the door caught his attention, as it
was meant to. He swung the bag onto the neatly made bed and turned, flipping
his layered patchwork cloak over his shoulders in a practiced gesture. He
crossed his arms over his chest and set his heels, and said, quietly,
"Morningstar."

Lucifer's beauty was not the sort to which
one could grow accustomed. It was composed of small imperfections—the long
nose, the too-lush mouth—that amounted to a breathtaking gestalt, so every
shift of expression revealed some new facet of the Devil's charm.

He framed himself in the poet's bedroom
doorway as if standing for a portrait. His wheat-colored hair dragged in
disorder over the black velvet shoulders of his jacket, and even in the dim
light of the gas lamps his eyes were sharply blue. His white wings rustled as
he folded them against his back to step into the room, and rustled further when
he let them fan wide. :I wondered when thou wouldst make thy mind up to go.:

"I made my mind up some time
ago," the poet said. "I've no reason to stay, with Murchaud
gone." :Thy old Devil beguiles thee not, Kitten?:

The poet's smile felt tight across his
teeth as he chose not to answer the question. "You know I hate that
nickname."

:Then perhaps thou shouldst have kept
thine own name. What wouldst barter me, to have it back?: The poet picked up
his bag and slung it over one shoulder, and stepped wide around the Devil on
his way to the door.

He was almost there when the flagstones
shuddered under his feet, in time with an enormous hollow thumping. He
sidestepped, almost tripping, and Lucifer steadied him with an outstretched
wing. "Were you expecting a visitor?"

:I know that knock,: Lucifer answered. He
swept the poet forward with the leading edge of his wing, and followed him
through the door.

The poet's footfalls were hushed on long
silk carpets, but the vast emptiness of Hell's corridors gave the sense that
they s
hould
echo. The poet shivered, gathering his cloak tighter in his
left hand, tugging it over the rapier he wore on that hip. You could feel the
loneliness here, the constant awareness of exile. It had the weight of
oppression: whatever was in Hell was forgotten, shunned by the larger world.

"What would bring him here?" the
poet asked, as much to fill up the silence as because he cared to know.

Lucifer's shrug lifted his wings. He
gestured with one long hand as if brushing a curtain aside. :Perhaps he's come
to see thee off. Or to invite me to a ball. It is All Hallow's Eve —:

Someone stepped into the corridor before
them: a big man, bearded, his red hair twisted into a club at the nape of his
neck. The freckles across the bridge of his nose made a striking discontinuity
with his glower. "There's a Devil on your doorstep/' he said.

:Thank you, Keith,: Lucifer said. :I had
noticed. You will accompany me to greet him.:

Keith MacNeill, the Dragon Prince—and so
in a metaphysical manner the heir to Arthur Pendragon and Vlad Dracula—shook
his head. "You can hold me captive by my oath, but I won't be compelled to
fight your wars, Morningstar."

Lucifer smiled through his curls. :Shall
it come to fisticuffs?:

The poet chuckled, but Lucifer took no
notice. Instead, he strode into the lead, leaving Keith and the poet to spin in
his wake, hurrying to keep pace.

The great doors to Lucifer's palace stood
open and unguarded, and beyond them, in the courtyard, waited Satan. Another
poet's Devil, that one, a batwinged horror with his upswept horns and smoke rising
in coils from wings that radiated sooty heat like fire-charred stone. Lucifer
stopped the poet and the Dragon Prince in the doorway with a sweep of his hand,
and stepped outside to meet his brother.

The poet folded his arms again and leaned
against the doorframe to watch. Beside him, Keith stood squarely, frowning,
shoulders tense. They didn't spare each other a word, but Keith did offer the
poet's rucksack a raised eyebrow. The poet answered with a shrug.

In the courtyard, the devils circled like
tomcats. The poet could imagine their mantling wings —Satan's stone-black and
membranous, Lucifer's shining white under the sunless sky—transformed to lashing
tails and flattened ears.

:Satan,: Lucifer said, with all his
exquisite mocking politeness intact. You haven't the look of one who comes
seeking society.:

"I heard a rumor," Satan
answered. His voice sifted dust from the stones, and the poet flinched from it,
covering his ears with his hands. Keith winced, but held his ground. "I
came to find the truth in it." :You presume I know of which rumor you
speak.:

Satan paused. He held out one black,
knobby fist, the talon on his thumb projecting between his fingers. He loosed
them, and a wad of paper slipped free, smoking slightly from his touch.

With a swift, careless gesture, Lucifer
swept it up in the curve of a wing and flicked it into his own hand. He
uncrumpled it, the paper weighty and soft, and smoothed it between his fingers.
After studying whatever was written there for a moment, he looked up, tilting
his head back to meet the other Devil's sullen stare. Satan seemed a monolith
beside him, though Lucifer was both well-made and tall. : It is a letter by my
hand, requesting conversation with Him who exiled us. What of it?:

"Morningstar," Satan said, his
voice low and reasonable, "see you who stands in yonder doorway, watching
you? You have a Dragon Prince, my brother. You hold in your hand a weapon even
God must respect. But wield it, and all the devils in all the Hells will stand
beside you."

SWEET HOME ALLE BAMMA (SOLBIDYUM WARS SAGA) by Musser, Dale
The Origin of Sorrow by Robert Mayer
Experiment In Love by Clay Estrada, Rita
A Prideful Mate by Amber Kell
Greed by Elfriede Jelinek
It Isn't Cheating if He's Dead by Julie Frayn
Boots and Roses by Myla Jackson
The Man Everybody Was Afraid Of by Joseph Hansen
Into the Rift by Cynthia Garner
Elizabeth Powell by The Traitors Daughter
Our partner