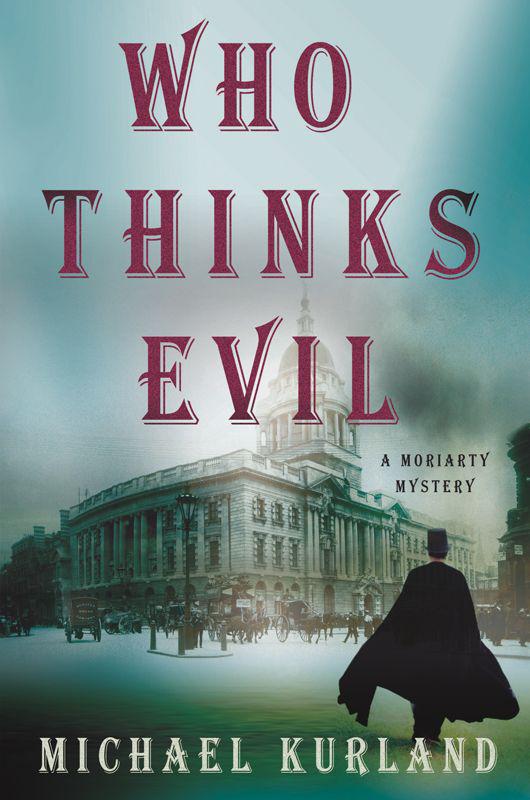 This book is for Sam and Archie, boon companions who are sorely missed.

I would like to thank Ms. Linda Robertson for her unerring eye, and for always telling me what I needed to hear.

Chapter One:
In the Dock

Chapter Five:
One Night’s Play of Fox and Hare

Chapter Fifteen:
The Whichness of What

Chapter Twenty-six:
Do I Hear a Waltz?

Chapter Twenty-seven:
The Prince and the Giggler

Chapter Thirty:
On the Moor

[shame to him who thinks evil]

In some small ways my relating of this history of various events occurring during the later Victorian era may differ from that found in contemporary chronologies, journals, reports, and such. In all such areas of conflict my version is, of course, the correct one. However, all persons appearing in this book shall be regarded as fictional regardless of their resemblance to important historical personages or your Great-Aunt Harriet.

ACTING on information received, detectives of the Criminal Investigation Division of the Metropolitan Police have detained Professor James Moriarty of 64 Russell Square, Camden. Professor Moriarty is being questioned in regard to the attempted robbery on Saturday last at Widdersign-on-Ribble, the country estate of His Lordship Baron Thornton-Hoxbary, located just outside the town of Wedsbridge in Nottinghamshire.

In what has become known as the Widdersign Outrage, six masked men armed with revolvers forced their way into the manor house at or about midnight, after first assaulting and tying up the gatekeeper, two grooms, and the senior coachman. Once inside, they assembled the occupants of the house in the dining room, where one of the villains guarded them while three smashed their way into the small museum where His Lordship keeps a priceless collection of Greek artifacts acquired at the beginning of the century by His Lordship’s grandfather. The other men ransacked bedrooms on the upper floor, gathering up jewelry and other valuables of His Lordship and Lady Hoxbary and their sixteen houseguests.

James Mercer, the chief butler, who had been tied up in the lower pantry along with the cook, an upstairs maid, and a serving girl, as well as a maid and two valets in the service of several of the houseguests, managed to free himself by the expedient of breaking a glass and sawing at his bonds with a sharp shard. Mercer immediately released the two valets, whereupon the three of them repaired to the gun room on the ground floor. Arming himself and the others with three rifles, a shotgun, and a Webley .445 service revolver, Mercer led the way up the servants’ staircase to the upper floor, where he and the other two intrepid servants accosted the robbers.

In the ensuing gun battle two of the robbers were killed and one shot in the leg. The others escaped into the forest, and it is believed that at least one of them was wounded. One of the valets, Andrew Lamphier by name, received a bullet in the shoulder and is now recuperating in Queen Anne’s Hospital and Infirmary in Nottingham.

The robbers fled without any of the items they had attempted to steal, although a small Mycenaean vase dating from the fourth century
B.C.
was found shattered in the grass. The Nottinghamshire police believe that the remaining culprits will shortly be apprehended.

Baron Thornton-Hoxbary declined to release the names of his houseguests, stating he did not wish to add notoriety to injury, but it is believed that among the guests were the Duke and Duchess of Pennaugh and Sir Arthur Sullivan, the noted composer. It is not known in what way, if any, this outrage is related to the series of robberies of great homes that have plagued the countryside around the East Midlands for the past year. Readers of
The Standard
will remember our account of the daring robbery at Cramden Pimms, the Nottinghamshire estate of Lord Chaut, in March of this year, when thieves broke in through a window in the middle of the night and made off with several important jewels including the so-called Bain of Thorncroft, a twenty-carat imperial topaz, believed to be the world’s largest, owned by the Marchioness of Cleves, who was a houseguest of His Lordship at the time.

Professor Moriarty, quondam holder of the Thales Chair of Mathematics at Midlothian University, is well regarded in mathematical and astronomical circles for his monograph
The Dynamics of an Asteroid.
What information he is expected to supply the police in regard to this unfortunate affair is unknown.

Special to The Standard

On Thursday evening at about 8:30
P.M.
an unclad and severely mutilated body was found floating in the Thames River below Blackfriars Bridge. Dr. Phipps, the police surgeon, who was called out to examine the body, declared it to be that of a woman of between 18 and 25 years, who had been in the water for at least three days before she was found. Neither the woman’s identity nor the cause of her death has yet been established.

“If the law supposes that,”

IT SEEMED STIFLING HOT TO BENJAMIN BARNETT,
sitting in the rear of the courtroom, but Mr. Justice Hedge did not seem inclined to have any of the four oversized windows opened. In all the trials he had covered at the Old Bailey, Barnett did not remember ever seeing them opened. Barnett, owner and managing editor of the American News Service, sat in the back pew of the visitors’ gallery with his notebook open on his lap and a carefully sharpened Tiffman’s No. 2 lead pencil in his hand. Professor James Moriarty had just been brought up from the cells and taken his place in the dock. A tall man with a hawklike face and piercing eyes, the professor stood passively, his shoulders slightly hunched in his black frock coat, giving the impression that he was the only adult in a world—or at least a courtroom—of children. His trial as an accessory in the Widdersign murders had gone on for four days before it was given to the jury, and those good gentlemen had now been out for three. Now, at four thirty in the afternoon of the third day of deliberations, the judge had reconvened the court. The bewigged barristers had returned from wherever barristers go while awaiting a verdict, the judge had donned his red robes and assumed the seat of the Queen’s Justice, and the jury was filing in.

Mr. Justice Hedge waited until the last juror had taken his seat and then leaned forward on his elbows and tilted his head, the better to peer over his wire-rim eyeglasses. His gaze focused on the foreman. He frowned. “I received your note,” he said. “It’s been three days.”

“Are you absolutely sure?”

“We are, milord. Absolutely.”

“You can come to no agreement?”

There was a stir in the small audience, which was quelled by a stern glance from the judge. The foreman, a thin, small, nervous greengrocer with a large, red-veined nose that gave character to his otherwise pinched and undistinguished face, nodded vigorously. “Yes, milord. That’s so, milord.” He clenched his hands into fists and thrust them behind his back to keep from fidgeting. “As you say, we’ve been at it for three days, milord, and we don’t seem to be getting nowheres at all.”

“I suppose, then, that giving you a few more hours to consider would be of no help?”

“You understand the charge?”

“You all, singly and collectively, understand and agree,” His Lordship began, pushing his glasses farther up on his nose, “that if the defendant, James Moriarty, has, as charged, been responsible for planning the robbery at Lord Hoxbary’s country manor house known as Widdersign, he is perforce therefore as guilty as any of the felons who were actually present at the scene of the crime?”

“And that, as the robbery resulted in the taking of human life, the defendant would be as guilty of the crime of murder as the one who fired the shot, even though he was not actually present at the time the crime was committed?”

“And even though the victims happened to be two of the criminals?”

“Yes, milord, your lordship has gone over that quite thoroughly. At first some of us had trouble seeing the justice in that, but your argument was quite persuasive. We has no longer any problem with that.”

“Perhaps if I had some of the testimony read back to you?”

The foreman looked horrified and responded quickly, “We don’t have no dispute over the testimony, milord, nor any questions pertaining to it.”

“I see.” Mr. Justice Hedge paused to adjust his wig, which had recently adopted the annoying habit of inching its way forward until his forehead completely disappeared. “Well then,” he said, peering down at the foreman as though the poor man were a hedge flower of some unexpected and particularly undesirable color. “What does seem to be the problem?”

“Well, milord, we can’t agree as to whether or not he did that he is charged with, based on the evidence as we’ve heard it, is what it comes down to, milord. He may have done, but there’s some as thinks he may not have done.”

“By ‘he’ I assume you mean the prisoner at the bar,” the judge specified, glancing down at the court stenographer.

“Yes, milord. The defendant, Professor Moriarty, that’s who we mean.”