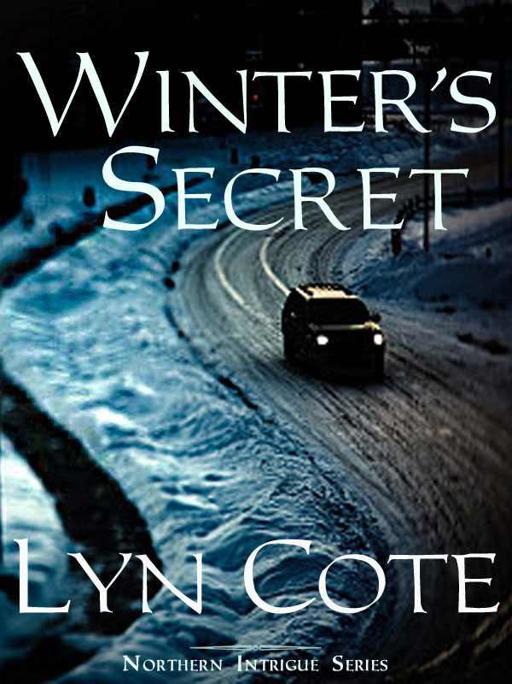 To my great husband for taking me up north.

And to Marilyn LeClere, my critique partner. Thanks for all those phone calls which start      "I've been thinking about your story ..."

Many thanks to Harry Dougherty, chief of police of Marion, Iowa, for his technical help with this book.

Trust in the Lord with all your heart; do not depend on your own understanding.

Standing to the side of the battered door, Sheriff Rodd Durand eased out his gun.

"Police! Come out with your hands up!"

He expected no answer.

Still, he waited. Snow sifted down on him from the ragged edge of the overhanging porch roof. He tugged up his collar against the harsh wind while trying to detect any sound from inside. He nudged open the sagging door and looked in. Then he stepped inside and walked cautiously through the cold house.

This was the second time he'd been called out on a frigid morning to face a wrecked door of a farmhouse burglarized overnight. Fortunately, in both cases the owner had been away for the night, so no one had been hurt. Rodd had been on the job just over a month. This was the second unsolved burglary in three weeks. Two failures. What a way to start out as county sheriff.

Inside, Rodd found what he'd expected—broken knickknacks, slit cushions, dresser drawers dumped onto the floor. Everything about the crime scene shouted, "Careless, clumsy!" The only reason the perpetrator succeeded was that he chose his targets well—isolated, empty houses.

This low-life thief preyed on the most defenseless—the elderly who lived alone out in the country. Leo Schultz had spent last night in Steadfast's clinic-care center. The shock of coming home this morning and finding his home burglarized had taken its toll on Schultz. The old man had looked pale and shaky. So Old Doc Erickson, who lived nearby, had come to take Mr. Schultz back to the county's only clinic.

Righteous anger swept through Rodd like flames. He had a thief, a nasty little weasel to catch.

Fighting the November gloom, Wendy Carey winked at the gray-haired woman who sat beside her in the front seat of Wendy's aged Blazer. "I saw Bruno Havlecek flirting with you—with my own eyes."

"What would I want with that old fool?" Ma Ukkonen snapped.

"I think he's cute, Ma," Wendy teased. Everyone loved this woman and called her "Ma."

As Wendy turned off Highway 27, the Blazer fishtailed. Oh, Lord, keep us safe, she silently prayed. Easing off the accelerator, she hugged the middle of the slick Wisconsin county road. The windshield wipers flicked away tiny snowflakes. She glanced at Ma. Ma's blood pressure had certainly worried her yesterday. That's why she'd taken Ma in for observation at the clinic. Now taking her home, Wendy still worried--Ma still looked worn down. And another dreary, gray morning offered no cheering-up. Wendy decided to go on teasing till Ma smiled and regained her usual good spirits. "And I love those little bow ties he wears."

With a humph, Ma folded her arms over her generous middle, padded by an outmoded wool coat. "If you keep talking like that, I'll paddle you like I did when you was little."

The older woman's blustery answer pleased Wendy. She'd get Ma to laugh before she had to leave her this morning. "You never paddled me. You fed me pancakes and maple syrup!"

Ma chuckled. "You sure could put away my pancakes. Now why are you asking about me and Bruno? I want to know who you're sweet on."

Wendy shook her head, trying to ignore the flicker of irritation this question, a frequent one, always brought. She repeated her routine answer, "Nobody around here to date."

Ma wagged her finger. "If I was twenty-five and as good-looking as you, do you think I'd be wasting my days taking care of a bunch of sick people?"

Wendy picked up the new topic. "Nursing is all I've ever wanted to do."

"I know. When you was little, you read me that book—"

"Nurse Nancy." Wendy grinned with real pleasure at the memory.

"A million times. So now you're all grown up, Nurse Wendy. Time you find you a man."

Wendy shrugged.
I tried romance, Ma. Not a good idea. Why can't everyone just let me be?
But she kept her voice light. "I have plenty of time for that." She turned up Ma's rutted drive. "Now I want you to promise me you'll take your blood pressure medicine every day. High blood pressure is nothing to play around with."

Ahead was Ma's white farmhouse with its large bay window in the front. An image of herself flashed in Wendy's memory—a little towheaded girl looking wistfully out the bay window, waiting for her tardy mother to come and pick her up—long after all the other children had been taken home. Remembering her loneliness jabbed Wendy like a dull needle.

Wendy gave Ma a sly grin. "Jiggs is a sharp old dog. He probably entertained some old hounds he hadn't seen in a while."

Parking the car behind Ma's house, Wendy glanced at the back door and froze. The beaten-in door hung open on one hinge. Another burglary?

Heedless, Ma turned the handle and kicked open the car door. She lurched toward her house over the frozen ground.

"Ma! Wait!" Wendy raced after her. She caught up, took Ma's arm, trying to slow her.

Ma shook her off. "Jiggs! Jiggs!" She shoved against the splintered door.

Wendy crowded close behind her. Just inside on the scuffed linoleum, the black-and-white dog lay motionless, silent.

Wendy threw her arm around the older woman, who slumped weakly against her. Supporting Ma, she guided her through the kitchen into the living room, where she eased her onto the sofa. Wendy didn't need her blood pressure cuff to see that Ma was in bad shape again. Her own heart quickened at the sight of the disarray around her. She took Ma's pulse —one hundred and fifty and threadlike. Worse than yesterday. Ma tried to speak , but her words came out garbled. Suddenly Wendy's fear became reality. Stroke.

Wendy pulled out her cell phone and ordered the ambulance. Then she quickly dialed 911 and tersely told dispatch about this third break-in. A sick feeling settled in her stomach. Finding Jiggs like that had been a shock. After slipping a baby aspirin under ma's tongue, she knelt beside the sofa and chafed the old woman's icy hands. Poor Ma. Poor old Jiggs. Wendy blinked rapidly to ward off tears that wanted to fall. "Don't worry, Ma. We'll get you back to the clinic right away."

The mantel clock ticked loudly in the stillness. Ma moaned on and off.

Praying for the ambulance to hurry, Wendy checked Ma's vitals and tested her limbs for weakness. All the while she tried to avoid looking at the mess that the thief had left behind. She would have gladly strangled the person responsible.

Finally she heard a siren coming up the lane. She rushed to the front door and peered out the frosted window. The sheriff's Jeep Cherokee swerved to a stop, scattering snow-crusted gravel against the steps. What? The sheriff? How did he beat the ambulance here?

As Sheriff Durand bounded up the steps, she threw wide the door. The cold made her gasp. He shouldered his way in, and she slammed the door behind him.

The sheriff's commanding presence drew her like shelter in a blizzard. She stepped near him—her cold hands clenched together.
Where were the EMTs
? "Did you pass the ambulance?"

He glanced around at the disarray, then laid a reassuring hand on her shoulder. "They radioed dispatch. They swerved to miss a buck." His deep voice wrapped itself around her raw nerves. "They slid off the road south of here, but no one was hurt. They're just waiting for the wrecker to pull them out." Nodding toward Ma, he murmured, "What's wrong with your patient?"

"I think she's having a stroke," Wendy whispered. "The shock ..." She collected herself and led him back to Ma. "I just brought her back from spending a night at the clinic."

From the sofa, Ma reared up, her jumbled words sounding her distress. Wendy hurried to her side and put an arm around her. "We've got to get her to the clinic for medication—right away!"

"I'll drive you in." The sheriff bent to lift Ma into his arms. "Get the door, please."

Wendy scrambled ahead of him, opening the front door, then outside, the Jeep door. "I'll get in first. You lift her in and I'll cradle her head in my lap."

A Book of Silence by Sara Maitland
Midlife Irish by Frank Gannon
Andrew's Brain: A Novel by Doctorow, E.L.
Mockingbird by Kathryn Erskine
The Faerion by Jim Greenfield
A Touch of Magick by N. J. Walters
Beijing Coma by Ma Jian
Midnight's Children by Salman Rushdie
The Heart Broke In by James Meek
The Stone Girl by Alyssa B. Sheinmel
Our partner