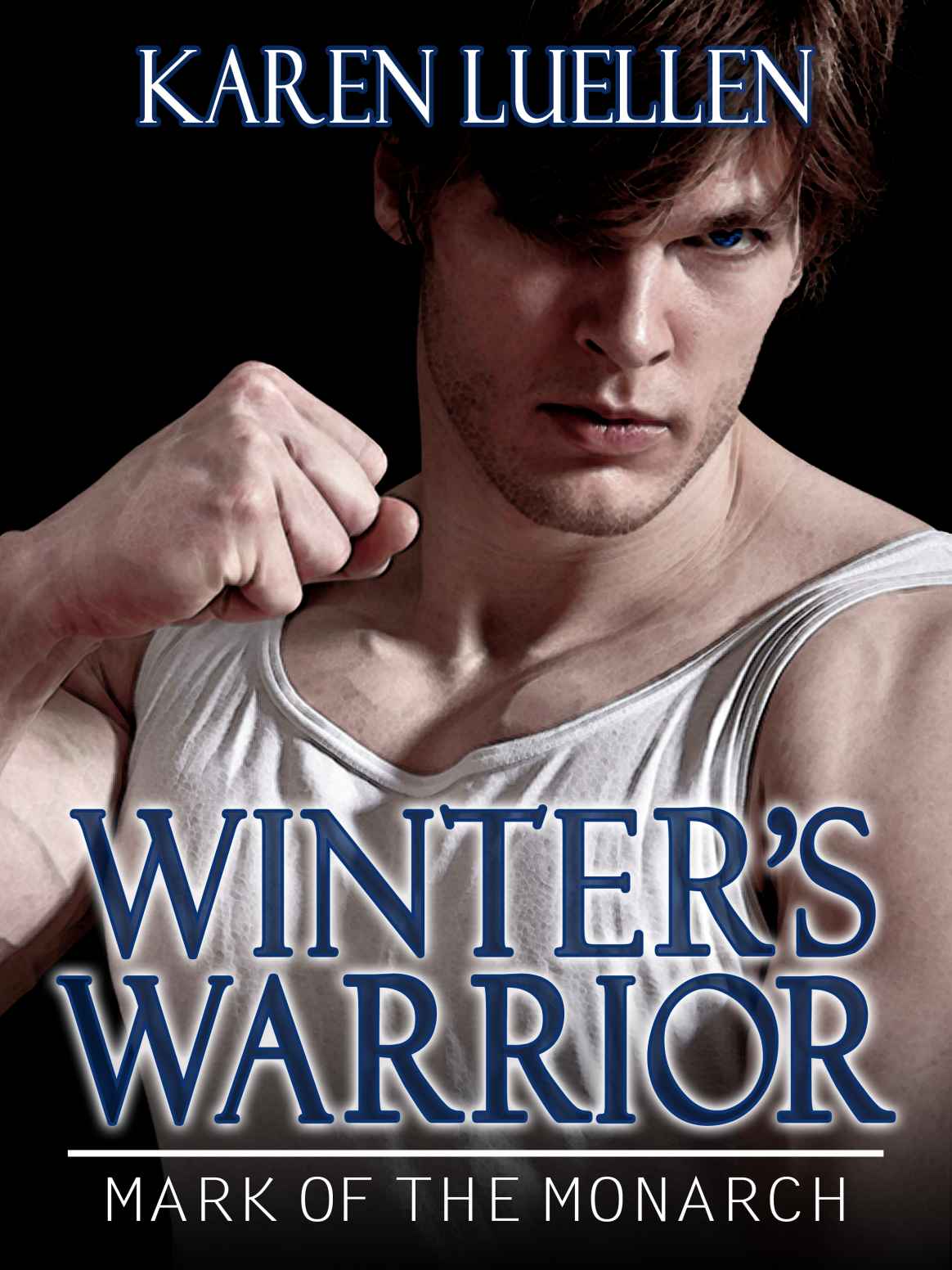 Mark of the Monarch

Winter’s Warrior—Mark of the Monarch

This ebook is licensed for your personal enjoyment only. This ebook may not be re-sold or given away to other people. If you would like to share this book with another person, please purchase an additional copy for each recipient. If you’re reading this book and did not purchase it, or it was not purchased for your use only, then please return to the author and purchase your own copy. Thank you for respecting the hard work of this author.

Your Faith Lifts Me

To everyone who has loved so deeply

That your own breath was only worth taking if

T
hose who mean the world to you

A
re there to breathe life back into you.

My family, my breath.

Special thanks to my beta readers.

(They named themselves “Betaheads.” Ha!)

You wonderful people made the editing process

so much easier with everyone helping me look for errors and disconnects.

Warrior
is a far better book because of you!

I love you all and am very thankful to you for your hours of effort.

You are the best!

Dr. Kenneth Williams wondered if the delicious stench of decomposition was already tickling the senses of the flies that had made their homes in the tall grass surrounding the sickly pond.  He was trying to resist the urge to go back and see for himself.

Had they laid their
eggs in the drifter’s torn flesh?  Were larvae already starting to form, ready to feast on the decayed tissue?  Had anyone found the wretched body?

Absently
, the doctor reached into the deep pocket of his white lab coat and fingered the lumpy spheres he had kept as souvenirs.  They were still mostly frozen.  He was no fool.  He had cleaned them thoroughly and shaped them with his expert scalpel until they were as pristine and perfect as possible.  He rubbed the bulbous lumps with his thumb reverently, as though they could grant wishes if touched in just the right way.

What would I wish fo
r?
Dr. Kenneth Williams thought.  A smirk played at the corners of his lips.

He
pondered all he had already accomplished.  He had a beautiful, well-connected fiancée from an affluent family, a successful start to his medical career and all the respect and prestige that went with it.  He satisfied his primal and scientific urges with the little excursions across the country by luring the homeless and destitute into his rented luxury cars, injecting them with a neuromuscular-blocking agent and playing with them even as they were paralyzed but conscious.

The young doctor cou
ldn’t help but smile at the thought of the numerous subjects he’d savored as he watched death slip across their faces at his hands.

What he would wish f
or, though, was the respect of one very powerful professor: Donovan Arkdone.  Now, that was one man who lived and breathed the kind of science Kenneth Williams craved.  He waited patiently for Professor Arkdone as he rolled the cold eyeballs around in his pocket.

“
Professor Arkdone, so good of you to meet me.  I know you’ve been busy with the upcoming election.”  Williams stood from the leather recliner as he released the eyeballs back into the crisp pocket and reached out with the same hand to greet the professor with a hardy handshake, as was expected between colleagues.

“
Oh, yes, well—once I’m Senator, life will be even busier.  I’m glad to have made time for you.” Arkdone beckoned one of the many waiters over.  “What are you drinking, Williams?”

“Oh, excellent choic
e.”  He turned back to the waiter and said, “I’ll have a twelve-year-old, single malt Scotch.”  He nodded dismissively at the help and turned his attention back to Williams.

“Good idea to meet
at the country club lodge.  It’s better to have our discussion where we can enjoy privacy.”  The waiter came back immediately with a lead crystal tumbler filled halfway with golden liquid on a silver platter.

The attendant waited
patiently as Professor Arkdone slowly rolled the tumbler in his hand, and held the liquid up to the light before bringing it to his aristocratic nose and sniffing deeply.  He brought the edge of the glass to his chiseled lips and sipped just enough to swish around in his mouth.  He nodded once to the help then waved his hand as though shooing a fly.  The waiter got the hint and backed out of the private room the men had reserved, closing the door behind him with a quiet click.

“So, tell me what’s
on your mind, Doctor,” Arkdone asked innocently.

“Sir, I have the utm
ost respect for your work.  I have read every one of your papers on psychological warfare including fear control.  But I’m especially interested in your work with the CIA.”  Kenneth Williams hesitated—completely aware he was walking at the edge of a very dangerous abyss.  His thirst for knowledge overwhelmed his sense of self-preservation and he pressed on.  “Specifically, I am interested in Monarch Programming.”

There, he’d said it.
No backing out now.  He knew he could be killed for even asking this powerful man about his work in the mind-control program, but he was willing to risk it for the chance of collaboration on the most sadistic levels.

Professor Donovan Ar
kdone narrowed his eyes at the young doctor seated across from him.  He leaned back in his black leather seat and tapped his diamond ring on the exquisite crystal tumbler.  “Now why would a simple medical doctor ask about such a topic?”

Realizing he was playing a
deadly game of chess with a brilliant mind, Williams took a deep swallow of his own drink before continuing.  Liquid courage.

“Fascinating,” the p
rofessor drawled, gazing out the window at the fat snowflakes drifting down.

“It
is
fascinating, sir,” Williams scooted his moderately attractive, albeit slender frame to the front edge of his own leather chair.  It squeaked under his movements.  “I have even begun human trials.”

“Oh,” the professor’
s brows lifted in mock surprise, “You got the FDA to approve human trials?”

The professor smirke
d before making a series of tsking sounds with his handsomely formed mouth.  “Now why would you admit that to me, Kenneth?”

“I’m hoping if I tru
st you with the details of my work, you’ll trust me with yours.”

And there it was,
he thought.
I’ve just nailed my own coffin.

He reached
back into the deep pocket of his coat and felt a sense of peace at the cool touch of the pieces of flesh rolling in his hand.

“Tell me more about
your work,” the professor prompted, taking another swig of his Scotch, nearly emptying the glass.

Margo’s white-knuckled grip on the steering wheel of her rental was nothing compared with the white knuckled terror gripping her heart.  Beside her, Maze yawned nervously, whimpering and whining at the tension he felt vibrating off the usually mild-mannered human.  The thick, silver fur on the back of the coyote’s neck stood on end making him look even more intimidating than his fifty-five pounds of pure muscle usually did.  Prancing in the passenger seat, he alternately licked Margo’s tear-drenched face and scratched at the car door, begging to be let out.

Margo pressed the ti
ny glow light on her digital watch for the umpteenth time.  She had given her children twenty minutes.  Twenty minutes was plenty of time to break into the hospital and get back to her.

But no one had come.

Every rustle of
breeze through the thick oak leaves all around had Margo’s anxiety shooting through the roof of the car.  She was sitting on needles, desperate for any sign of her children in every shadow for the last several minutes.

She couldn’t bear it
anymore.

Even Maze knew somet
hing was horribly wrong.  He started yipping and howling in his panic.  Margo peeled one hand off the wheel and absently reached out to rub the devoted coyote’s ears.   He whimpered under her hand, refusing to stay silent.

The children were in
there.

Her reasons for living were captured and back in the evil hands of the monster she’d run from for what felt like forever.

Her precious
soulful baby girl Meg, and her strong and gentle-hearted son, Alik, were already captured.

Margo’s brain just c
ouldn’t wrap itself around what was happening.  And when she heard her youngest, her Evan, so scientific and logical, tell her he loved her and asked for prayers….

Margo swallowed hard
the tears slipping down her throat.

Reaching to the floo
rboard, she retrieved her satchel full of weapons.  She ripped off her long-sleeved shirt, ignoring the buttons as they popped and flew through the cab.  Beneath was her bulletproof black armor.  Over the armor she yanked the black straps of her tactical cross-draw shoulder holster and secured the clips around her slender waist.

The more she forced
her body into action, the clearer her thoughts became.  Margo was slipping into soldier-mode.

From the satchel, sh
e pulled out one Para 9 and one Ruger LCP Pistol.  Her deft movements quickly checked that they were both loaded and ready.  She shoved them into the holsters on either side of her waist.  Next she pulled out a Glock, which she first checked, then shoved into her black boot before reaching back into the bag for more clips.  With her pockets full of ammo the bag was almost empty, but not quiet.  Two things remained.  One was an eight-inch blade she added to her waistband and the other was her Micro Uzi, fully loaded.

Margo
murmured a prayer, as her eyes scanned the scene before her.

She slowed her breat
hing and rolled her head.  “Okay, Maze.  Let’s get Meg and the boys.”

Maze’s yelp evolved
into a growl.  His crisp yellow eyes never left the fifteen-foot wall only interrupted by the ordinarily heavily guarded gate.

Margo could see her
children had been here already.  The cameras were blown out and the black boot of a downed soldier could barely be seen from the binoculars she’d used to study the scene.

Margo’s hand reached
for the door handle and yanked it wide.  Maze spilled out of the car behind her and immediately pawed the ground, desperate for Margo’s permission to run.

The Getaway God by Kadrey, Richard
The Healing (The Things We Can't Change Book 3) by Kassandra Kush
Richard & John: Kings at War by McLynn, Frank
Eloquent Silence by Weise, Margaret
Mortal Engines me-1: Mortal Engines by Phillip Reeve
Basque History of the World by Mark Kurlansky
Night Myst by Yasmine Galenorn
Her Italian Millionaire by Carol Grace
Little Lady Agency and The Prince by Hester Browne
The Last Hour by Charles Sheehan-Miles
Our partner