BOOK: Witch Switch
8.28Mb size Format: txt, pdf, ePub
Read Book Download Book
ads
She grabbed the broom and went out to sweep up some of the dirt in the hallway.
Achoo!
Katie sneezed as dust flew up all around her. “This place is really gross,” she murmured.
She looked up and noticed a cobweb on the ceiling. Katie lifted up the broom and tried to knock the web to the floor. But instead of landing on the floor, the strands of sticky dust landed in Katie's hair.
“Ooh, yuck!” Katie cried out. She reached up and tried to yank it out. But the sticky threads were stuck in her wild gray and black hair.
Katie was very, very upset. She didn't want to be in this creepy old house anymore. She didn't want to have dust up her nose or cobwebs in her hair. And she
certainly
didn't want to be a witch.
Katie sat down on the big green couch and began to cry. This was the worst day ever! The magic wind had switcherooed her into a lot of weird things before, but it had never changed her into anything as horrible as this! 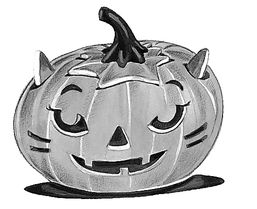 Chapter 12
“Let Katie go!”
“Free our friend, you old witch!”
“Please don't eat Katie!”
Katie heard voices coming from the street outside the house. She peeked outside the window to see where they were coming from.
Wow! George, Kevin, and Benjamin were standing across the street, shouting. They had come back for her!
“There she is!” Kevin shouted nervously. “The witch!”
“Come on, let Katie go,” George shouted to Katie.
“Don't eat our friend,” Kevin added.
“She won't taste very good,” Benjamin said. “She's just a scrawny fourth-grader.”
Hey! Who is he calling scrawny?
Katie thought angrily.
But she didn't stay angry for very long. She was too happy to see her friends again. She was so tired of being all alone in the creepy house.
Katie was so excited to see George, Kevin, and Benjamin that she forgot all about being turned into the Witch of Elm Lane.
She ran out onto the front porch. “It's okay!” she shouted to her pals. “I'm fine. Come on inside.”
But George, Kevin, and Benjamin didn't see a fourth-grade girl on that porch. All they saw was an old lady with dust on her face, cobwebs in her hair, and a broom in her hand.
“AAAAAAHHHHHHHHHHHH! It's the witch!” the boys screamed as they ran off down the block.
Now Katie was all alone again. She sat down on the steps and rested her head in her hands. 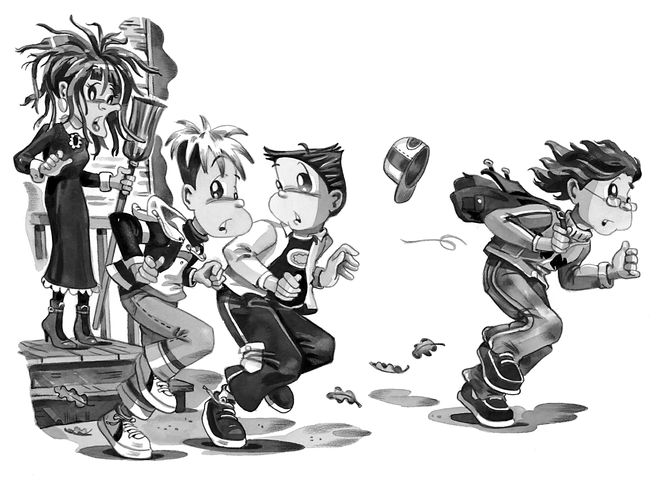 A cool breeze began nipping at the back of Katie's neck. She lifted up her head and looked around. The leaves in the trees were not moving. The spider was calmly spinning its web, and the dead leaves on the lawn were lying still.
The wind was only blowing on Katie. She knew what that meant.
The magic wind was back!
Within seconds, the magic wind began swirling around and around Katie, blowing harder and harder with each spin. Katie held onto the banister beside the stairs to keep from being blown away.
And then it stopped. Just like that.
The magic wind was gone.
Katie Carew was back. And so was the Witch of Elm Lane. In fact, she was sitting on the porch,
right next to Katie
.
This was
so
not good! 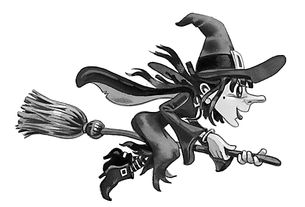 Chapter 13
“AAHHH!” Katie shouted, leaping to her feet.
“AAHHH!” the witch shouted, leaping to
her
feet. “What are you doing here?”
Katie didn't stop to give her an answer. She darted down the stairs. But the witch called after her.
“Stop. Wait. You don't have to go. I didn't mean to scream. I was just surprised to see you,” the Witch of Elm Lane said, apologizing. She looked around. “Come to think of it, I'm kind of surprised to be out here. The last thing I remember, I was inside, carving pumpkins for Halloween.”
Katie stopped. The witch didn't sound so scary after all. She just sounded like a normal old lady. A
very confused
normal old lady.
“I . . . um ... think you came outside when you heard some of my friends shouting,” Katie told her.
“Yes, I remember that. At least I think I do. It's all kind of fuzzy,” the woman told her. “I remember you, though.”
Katie gulped. “You do?”
“Yes. Aren't you the little girl who was here with a cat yesterday afternoon?”
Katie nodded. “It was a stray kitten. I was trying to feed her. But you scared her away.”
“I know,” the woman said. “I didn't want to. It's just that I had put some plant fertilizer around my rosebushes, and I was afraid if the kitten licked it, it might get sick. And the last thing I would want to do is hurt a little kitty.”
“Oh, so you weren't being mean to the cat?” Katie asked, surprised.
“Of course not. Why would I be?” the woman replied. “I love cats. I wish I could have one. But I do a lot of traveling. I love seeing different countries. And a cat needs someone around to keep it company.” 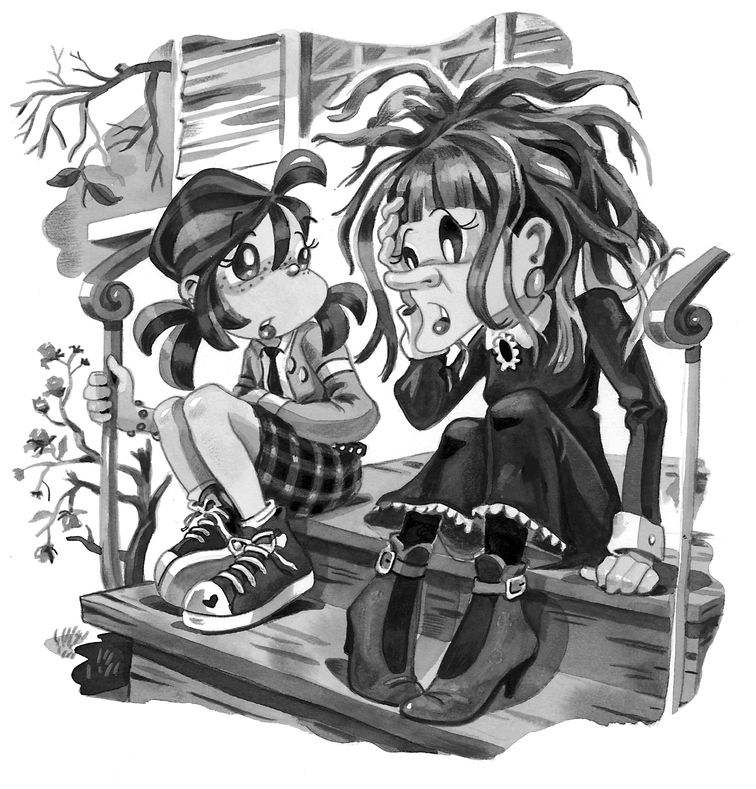 “I
love
to travel,” Katie told her. “During my last vacation I went to England, Spain, France, and Italy. My dog stayed with our next-door neighbors. He missed us a lot, I think.”
“I'm sure he did,” the woman said. “I go on
a lot
of vacations. Imagine how much a cat would miss me if I was gone from home for a long time.”
“Is this your home?” Katie asked. “I didn't think anyone lived here.”
“No one has, not for a long time,” the woman replied. “But the house has been in my family for years. I decided to come and fix the place up and maybe live here, at least for a while.” She stuck out her hand. “So I guess we're neighbors now. My name is Maggie Hamilton.”
“I'm Katie Carew,” Katie told her. “I live a few blocks away.”
“It's very nice to meet you, Katie,” Mrs. Hamilton said. “It's wonderful to have some company. I've been here a month now, and I haven't met anyone. Hardly anyone even walks by.”
“That's because we thought the house was hauntâ” Katie stopped herself before she could finish her sentence. She didn't want to hurt Mrs. Hamilton's feelings. “I mean . . . well, we didn't think anyone lived here. And then when I saw you yell at the cat ...”
Mrs. Hamilton laughed. “I must have looked awful that day. I had dust on my face, and a few cobwebs had fallen on me. You must have thought I was a witch or something.” She laughed again.
Katie blushed but didn't answer.
Mrs. Hamilton grinned. “And I probably don't look much better now. I'm sorry to be so untidy. I've been cleaning all day. You wouldn't believe what a mess it is in there.” She looked down at her dust-covered dress. “Or maybe you would.”
Oh, Katie would believe it. She'd seen the mess, after all. But she couldn't tell Mrs. Hamilton that. Then she'd have to explain all about the magic wind.
“I guess I'll meet most of the local children on Halloween. I plan on buying lots of candy to give out when they come trick-or-treating,” Mrs. Hamilton told Katie. She smiled warmly. “I just love Halloween. My favorite thing to do is carve jack-o'-lanterns. I can carve almost any shape into a pumpkin. I can't wait for you and your friends to see them!”
Katie frowned. She knew none of the kids would be coming to visit Mrs. Hamilton on Halloweenânot since Katie told them that Mrs. Hamilton was a witch.
But Mrs. Hamilton wasn't a witch at all. She was just a nice, lonely old lady who was cleaning up her house.
“Would you like to come inside and see my jack-o'-lanterns now?” Mrs. Hamilton asked her. “I'm working on a special one at the momentâit's going to be a skeleton!”
“Well, I . . .” Katie began. Then suddenly she heard a loud bong and some ringing coming from inside the house. The clocks were chiming. “What time is it?” she asked Mrs. Hamilton.
“It must be four thirty,” Mrs. Hamilton told her. “My clocks all ring once on the half-hour.”
“Four thirty? Oh, no! I'm late for my cooking class!” Katie exclaimed. She couldn't believe she had forgotten that it was Wednesday. She was supposed to have been at the Cherrydale Community Center fifteen minutes ago. “We're making pumpkin pie today.”
“Mmm ... my favorite,” Mrs. Hamilton said. “You'd better get going. It was nice meeting you, Katie. I hope I will see you and your friends on Halloween.”
“You will,” Katie assured her, trying hard to smile. “I'll make sure they're here.”
But as she ran down the path, Katie sighed. She had absolutely no idea how she was going to do that. Convincing the kids at school that there was no Witch of Elm Lane wasn't going to be easy. Not at all. 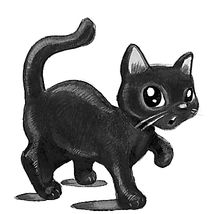 Chapter 14
“Katie Kazoo! Am I glad to see you!” George exclaimed the next morning as Katie walked onto the playground.