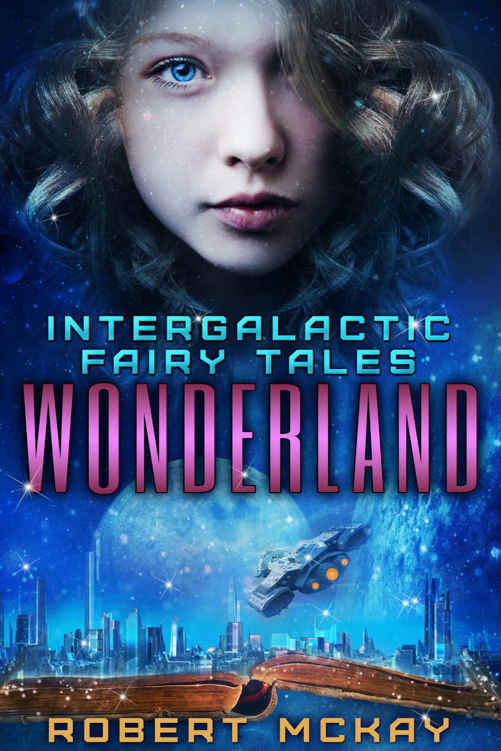 For my wonderful wife, Faith.

My life wouldn’t be possible without you.

Sign up for the McKay Manor New Releases mailing list and get a free copy of the latest novella
Awakened
, an Intergalactic Fairy Tales story exploring the Jabberwock's origins.

“Arrr! Avast you scurvy dogs.” Alice jumped from the forecastle to the main deck, though they resembled a chair and tile floor. “First Mate, Dinah, be that a vessel ripe for plunder off the port bow?”

It wasn’t much of a vessel from what Alice could see. It sat fairly high in the water, so there was probably little in the way of cargo, but there was only one visible crewman. The man on board appeared unaware of their ship being within striking distance, ready to take him down. He was reading on a small electronic device, hardly appropriate for sea travel, and bore a striking resemblance to her father, but Alice wouldn’t be deterred.

“Mew,” replied Dinah, before returning to grooming her paw.

“Then what are you lot standing about for? I want to be painting a new name on that ship’s arse and counting my plunder before sundown. Bring us about!” She waved her sword in the air and pointed it toward the ship.

“Language, Alice,” said the crewman of the soon to be plundered ship, but he was too far away to be heard properly over the roar of the ocean.

After a bit of furniture rearranging, Alice’s ship was brought up alongside the other vessel. “Prepare to board,” called Alice. “If you lot want to eat tonight, make damn sure you don’t set this thing ablaze.”

“Mew,” said Dinah from her seat upon the forecastle chair.

“Excellent, First Mate, Dinah. I’m glad to hear that you want to lead the raiding party!” Alice hefted the black tabby cat into her arms, a mischievous grin on her face. “I can see you’re ready by your determined look. Then off you go!”

The black tabby landed on the end of the couch a couple of feet away with a soft plop, where she looked around in confusion and then tore off at high speed toward Alice’s father. When she hit his lap, she seemed even more confused and bolted out into the open sea. Unfortunately, she took her father’s reading tablet with her.

“Agh!” shouted her father, inspecting his thighs for claw marks.

“Alice,” hissed her mother from the kitchen doorway. “What in the world are you doing?”

Her mother entering straight from the open sea ruined the fantasy. Alice sighed in defeat. “I was just about to commandeer this vessel and rename it, making it mine by pirate law, and force it to join my armada of ships.”

Alice’s father was watching with a slight smile, which died the instant her mother turned her glare on him.

“You are thirteen years old, Alice. You are entirely too old to be playing silly games like this on the living room furniture.” Her mother shooed her off her forecastle chair so that she could put it back in its proper place. “Right, James?”

“Right,” said Alice’s father, sitting up straight in his seat and putting on his stern face. “Pickle, you’re getting older now, it’s time to put away childish games like playing pirate.”

“And no more silly nicknames either,” said her mother, stepping over and taking the stick Alice had been using as her sword. She threw it casually into the lit fireplace. Alice watched it burn forlornly.

“Right, you’ll be an adult soon enough, P—Alice. It’s time to learn how to behave like one.”

Alice scowled at them both. She loved her pirate books like nothing else she owned. They were dog-eared and the bindings were falling apart from the number of times she’d read them. There was nothing in the world she could imagine she wanted to be more than a pirate. It was complete freedom to do what you pleased and take what you wanted from wealthy merchants who would never miss a couple of ships a year. Adventure and danger lurked around every corner. She could never be a teacher like her father, or a doctor like her mother. Not nearly enough excitement. “It’s not a childish game,” she retorted. “I’m practicing for the life I plan to live. I refuse to be just like my parents the way the two of you are like Grandma and Grandpa.”

“You don’t have to be just like us,” responded her mother, sitting on the couch next to her father. “You don’t even have to decide right now. You just have to stop jumping around on the furniture and learn to act like a proper young lady.”

They’d had this conversation before. As reasonable as her mother sounded, she didn’t really care what Alice wanted for herself. She would have a choice of proper professions like scientists, doctor, lawyer, or teacher and she would be groomed to fit in one of those roles, regardless of what she truly wanted. Her cousin Vincent had declared that he didn’t want to be the corporate type after receiving his degree in philosophy. He went out and bought a tiny house in the country and planted a massive vegetable garden and started calling himself a plant wizard. It was the family scandal.

Vincent’s parents had come over to see Alice’s parents one evening to discuss how they could stop their son from leading the life of a dirt-poor farmer. They concocted a plan that involved taking him out for dinner at a fancy restaurant and introducing him to a proper young lady they knew. She was studying business and planned to be a marketing executive.

Alice was dragged along to the stuffy restaurant and sat next to her cousin. He talked the whole time about his meal, marveling at how amazing it was that you could put little seeds in the ground and a few months later, food popped out. He said it was the most amazing magic he could imagine, and Alice finally understood why he called himself a plant wizard. While it was a life she would never choose for herself, she could see why he had chosen it. Apparently, the proper young lady could too, because she ended up leaving school to move out to the country with him.

“I’ve already made my decision, Mother,” said Alice, putting on her most polite smile, the one just like her mother used when she was around company.

“Oh?” said her mother, a hopeful twinkle in her eye. Secretly, Alice knew, she wanted her to be a doctor like she was, though she never said as much out loud. She wanted to give Alice the illusion of no expectations.

“Yes,” said Alice, folding her hands primly in front of her and willing her blue eyes to project seriousness. “I’ve put a lot of thought into it, and without any doubt, I can tell you that I want to be a pirate.”

Her mother’s jaw dropped and then clamped shut with an audible clack. “More games!” she fumed. Her father coughed, though it sounded suspiciously like a laugh, which earned him a wicked glare from her mother. “Up to your room young lady. You can go to bed without dinner tonight. And if I hear you up there tumbling around, you won’t be going to your friend Anna’s house this weekend.”

“Father?” pleaded Alice, knowing that he’d gotten her out of situations like this many times in the past.

He looked over to her mother, words of bargaining on his lips, but they died when he met her whithering glare. “Do as your mother says, Pickle.”

“Sorry, Laura. Do as your mother says, Alice.”

Alice’s lip began to tremble and her eyes welled up with tears. She wanted to stay and argue further, but she wasn’t about to cry in front of anyone. That’s not something a pirate would ever do. If she had to cry, it would be in the privacy of her own cabin so that her crew would keep a healthy fear and respect for her. She stomped off as loudly as she could and ran up the stairs to her room and slammed the door shut behind her.

She continued to stomp around her room with no real intention, other than being loud. She wanted her mother to enact the ban on going to Anna’s house. It hadn’t been much fun going over there the last several months. All Anna wanted to talk about were which boys she thought liked her by the way they pulled her hair and said mean things.