Working on a Full House 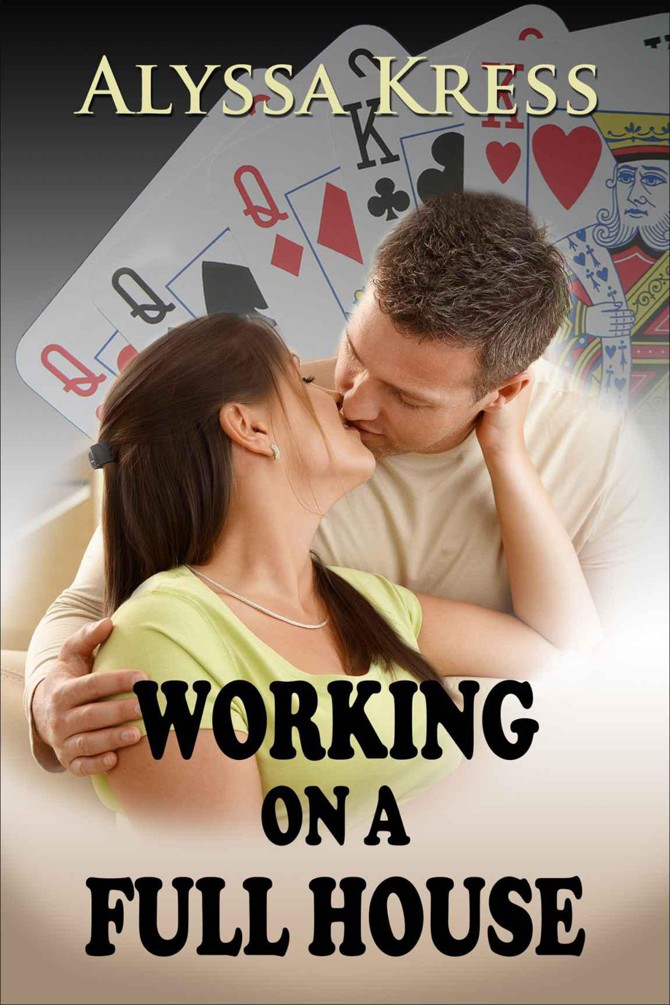 Can 'one night only' become 'until death do us part?'

Sensible pediatrician Valerie Kendrick would never dream of marrying a rootless gambler she meets at a bar in Las Vegas. But spending one night in the arms of this fascinating stranger is a fantasy too tempting to resist. For one night, she can pretend to be a femme fatale.

Professional gambler Roy Beaujovais has made millions of dollars, but never enough to feel complete. He'd hoped the woman with whom he spends one magical night might be the answer, but she deserts him in the morning.

Only after Valerie returns, and reluctantly admits she's pregnant, does Roy know what will finally fill the lonely hole in his life: becoming a father. He'll have to play his best hand ever, though, to get the skittish Valerie to include him in the game.

WORKING ON A FULL HOUSE

Discover these and other titles by Alyssa Kress at her webpage,
http://www.alyssakress.com

Love and the Millionairess

This ebook is licensed for your personal enjoyment only. This ebook may not be re-sold. If you would like to share this book with another person, please purchase an additional copy for each recipient. If you're reading this book and did not purchase it, then please visit
http://www.alyssakress.com
to find licensed retailers from whom you can purchase your own copy. Thank you for respecting the work of this author.

The characters and events in this book are fictitious, even those referring to actual or well-known entities. Any similarity to real persons, living or dead, is coincidental and not intended by the author.

The author would like to thank everyone who has given immense support and help in creating this and other stories: Julie Woolley, Kathy Bennett, Jenna Ives, Leigh Court, Cathy Yardley, Rose Murray, John Lovelady, and to Ruth Barges of blessed memory.

Special thanks to Dr. Jeremy Erdley for his knowledge of all things poker and pediatric. Any mistakes in these areas are my own. Also thanks to David, for entertaining me in Las Vegas on less than two dollars.

Other Books by Alyssa Kress

Preview of Your Scheming Heart

Exactly how did a girl go wild?

Valerie Kendrick sat at a bar overlooking the poker tables at the elegant Mandalay Bay Hotel in Las Vegas, toying with the drink she'd thought she ought to order since she was supposed to be living it up this weekend. It wasn't happening, though. Despite her grand effort to distract herself from all the disappointments back home, she only felt lonelier than ever while wandering the glittering casinos.

Clearly, neither drinking nor gambling were going to make her feel any better. Instead, what she needed was — was —

She had no idea. How did a woman put her self esteem back together?

Swirling her Margarita glass on the bar counter, she gazed down at the poker players half a level below her. All of them, bar one, appeared desperate to get rid of their money. The one, a man with tousled dark hair and a square-cut face, appeared discreetly determined to acquire more of it. He wore a lazy smile and had an arm hooked over the back of his seat, but he couldn't hide his lurking competence.

A wolf in sheep's clothing.

Valerie played with her straw and kept watching. The soft gray cashmere sweater the guy wore only seemed to emphasize the roughness of the man underneath. He had an air of knowing a thing or two. A real card shark.

He was fascinating. Virile, excitingly dangerous, outrageously handsome. He was like a precious gemstone, out of her price range. Still, it was fun to watch him, to fantasize...

Heck, if a man this compelling ever showed interest in her, she could get over Peter for sure.

Laughing silently at herself, Valerie was still watching the man when her cell phone trilled down in the depths of the purse she'd set against her shin.

"No." Valerie wasn't on call this weekend and the answering service wasn't supposed to forward messages. Neither should she feel the slightest obligation to take a call from a patient, even if it were just some sweet, innocent child in need —

"I give up." Valerie was still new enough as a pediatrician to be a sucker, she supposed. Lifting her purse, she dug inside for her phone. "Hello?"

"What are you doing, answering?" demanded the voice on the other end. "Your phone is supposed to be turned off. You're supposed to be too busy having a good time to answer."

Not a patient, after all. "Cherise." Valerie smiled.

"Don't talk to me," ordered Cherise, who seemed to do a lot of ordering, both in and out of her role as nurse practitioner at the clinic where they both worked. "Close your phone and turn it off."

Unwilling to hang up now that she had her best friend on the line, Valerie lied unabashedly. "But then how could I tell you my exciting news?"

Cherise paused. "You have news?"

Valerie's mouth curved at the note of disbelief in Cherise's voice. For all her cheerleading for a new and livelier phase in Valerie's life, Cherise didn't believe it might actually happen.

Her friend's accurate lack of faith in her sparked a devil in Valerie. She found her gaze turning toward the lounging wolf in the cashmere cardigan, recklessness personified. "I am right now looking at the man I'm going to spend the night with," she claimed.

There was a longer pause from Cherise. "Really," she finally said.

"Well," Cherise temporized. "I did think you needed to get away. And I do think it'd be good for you to see there are other fish in the sea, as it were..."

"And isn't the best way to do that by finding some stud muffin to soothe my bruised ego?"

"So. I've looked. And I've found." Indeed, Valerie watched, intrigued, as Cashmere, the wolf in sheep's clothing, threw three chips toward the center of the table. He did it with a casual air of challenge, an air Valerie suspected was intended to provoke the older man seated to his left. It worked. The older man shot Cashmere a sour glance and pushed six chips toward the center of the table.

"Uh huh." Cherise was audibly smirking. "So tell me, what does your stud muffin look like?"

"Let's see..." Valerie enjoyed the view as Cashmere set his own, matching three chips onto the felt. He was calling the older man's bet, the one he'd incited him to make. "He's got hair like a cup of rich coffee. Eyes the color of a stormy sea, and a build like — like — " How to describe the air of carefully leashed strength, the compact reserve of pure masculinity? "He's got a build like a street tough," she finally decided.

"Very yummy." Valerie watched the two men set down their cards. The older man's face turned red. Valerie saw him spew what appeared to be swear words, get up from his seat, and stomp away. Cashmere calmly swept the chips from the center of the table toward himself. "And I think he's a good poker player, too," Valerie mumbled.

"Nothing." The man's poker talent didn't matter. Valerie wasn't actually about to take up with a card shark. Nor was the card shark about to notice her. Not only was he professionally interested in his game, but a man this intriguing probably already had some equally fascinating woman with whom he was involved. Or could get one with a snap of his fingers.

"Well. Fine. You go for it, girl." Cherise's tone indicated she didn't believe for one instant Valerie was going to pick up some stranger she'd met in a casino in Las Vegas.

The little devil inside Valerie made one more enthusiastic jump, then hung her face sheepishly. Cherise was exactly right. Valerie didn't do things like that.

Instead of the sort of woman a man rejected in order to take up with, and soon get engaged to, somebody else.

"I'll be waiting for all the details on Monday," Cherise told Valerie.

Valerie sighed and set her elbow on the bar. With her cheek in her palm, she let her eyes rest on the wolf in sheep's clothing. Throwing three more chips onto the felt, he said something that made the other players at the table laugh.

Valerie smiled. All right, so watching wasn't very wild, but maybe it was just what she needed. Fortunately, a wolf like he would never notice a little sparrow like herself. That was the advantage of being a sparrow. He'd never notice. She could watch as long as she liked.

Roy noticed her the minute she sat down at the bar. She had dark, glossy hair, the face of a pure-hearted angel, and a tantalizing hint of feminine curves beneath the clinging sweater she wore.

Understated and classy, she clashed mightily with the glitz of the flashing slot machines on the betting floor.

It was funny what caught a fellow's attention when he'd achieved his life goal the week before. He was sitting here at a low stakes hold 'em table because he'd thought it would be more fun — more fun! — than entering one of the games where he won hundreds of thousands of dollars on a regular basis. And now he was getting distracted by a girl-next-door kind of woman who was sipping a Margarita at a speed that could not possibly induce intoxication.

Oddly enough, the nice girl had commenced staring at him. He could see it out of the corner of his eye. He could
feel
it, like a pair of fingertips, delicately touching here, and then there.

Frenchie, a dealer Roy knew well, was raising an eyebrow at him. It was rare Roy had to be told the action was on him.

Drawing in a breath, Roy slid his cards toward the muck. It was only after he'd completed the action that he realized the cards he'd just folded. Ace-king suited.

He experienced a moment's shock he'd thrown away such a hand, then leaned back in his seat. No doubt about it, he really
was
distracted. A week ago, this wouldn't have happened. No mere woman would have been able to slip through his concentration. The Queen of England wouldn't have been able to slip through. A week ago, he'd still been focused. He'd known exactly what he'd wanted — and had gotten it. He'd hit the magic number of dollars in the bank, precisely what he'd told his father all those years ago he was going to earn by the time he turned thirty-five.