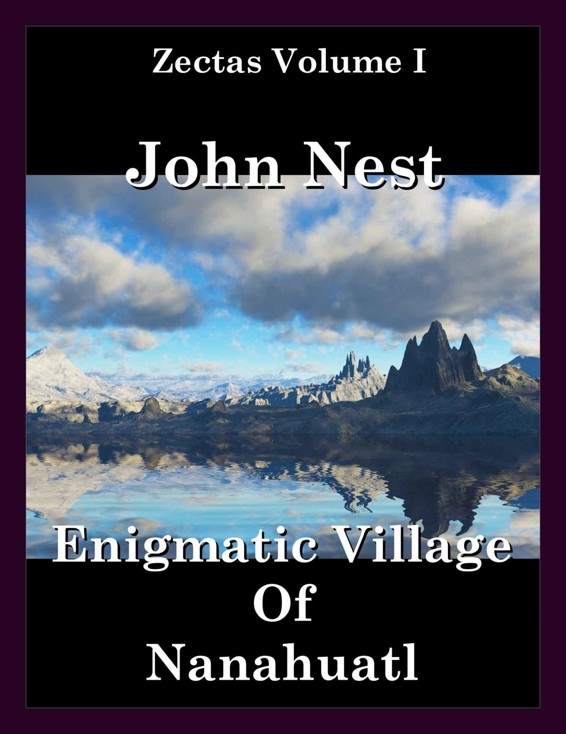 ZECTAS VOLUME ONE
The enigmatic village of Nanahuatl
This book is dedicated to my wife and three sons.
A special thanks to Vaanouney, ExperimentBL626, Fireutsie,
and you, for enjoying Zectas.
Table of Contents

Chapter 03 - Agriculture is a dangerous field.

Chapter 09 - It started at the Diner.

A world made for me.

Skyscrapers are truly a marvel of the modern age. With its majestic height towering over the land. From on top of such a high place you can almost feel like you're a God.

On an unfinished skyscraper approximately 800 meters from the ground stood a young man on top of a hanging metal beam that is still to be connected to the main structure.

"This is really exhilarating! The work is really difficult and dangerous but still with a view like this, it feels like I should be paying them rather than getting paid myself."

Nash Smoak is illegally employed at the construction site and as such the other workers take advantage of his unfortunate circumstance. They gave him the dangerous tasks of attaching unstable beams at the top most part of the skyscraper.

Nash is forced to take on this harsh schedule in order to support his 2 brothers and his sick Grandma who took them in after the accident...

When Nash was still 12 years old, their parents went out to celebrate their wedding anniversary. On the way to the restaurant a 16 wheeler truck lost control and swerved right into their car. Killing both of their parents instantly. It was an unfortunate accident. No one was to blame.

Nash's grandmother took all 3 of the brothers in. She was nearing the retirement age so supporting 3 growing boys would be really difficult. Nash was aware of his situation. Even though he was currently hurting inside he knew that he has to be strong for his family.

He didn't want to be a burden to anyone. He wanted to help out as much as he could. So he studied hard to become a scholar at school easing the expenses even if a little.

He started doing odd jobs here and there. Any job that a 12 year old could get he would do them. From newspaper routes to dog walking to cleaning gardens. Of course most of these jobs were given to him because the people in his neighborhood wanted to help him given his situation and all.

Unfortunately his Grandma got sick and the insurance wouldn't cover her illness. She's retired now so there is no longer any stable source of income except for her pension that could barely cover the rent and food expenses.

Nash wants his 2 brothers to go to college although they are still aged 13 and 10. He wants to prepare the needed funds so that no matter what course they plan to take he can afford them. Even at the expense of him stopping school and having to manage 3 jobs.

Working the 3 jobs is really draining and having no outlet for relaxation is dangerous even for those who have the kindest of hearts. The manager of the arcade grow fond of Nash and knew why he was working so hard. He asked Nash to come to his office.

"Nash, I've noticed that you've grown a little bit weary lately. That's why I've decided to lay you off from this job."

"But sir?! I need this job to support my family. Did I do something wrong? Whatever I did I'm sure I could learn from my mistake and avoid doing it again."

"Nash, you truly are an honest and kind hearted young man. But I'm afraid that taking on 3 jobs is too much even, for you. You need to find some form of relaxation and some sort of hobby that will help you deal with the stress."

"Have you heard about 'Zectas'?"

"Yes Sir. Of course I have, I mean who hasn't? That's what's been on the news for the past few months. It's the cutting edge VRMMORPG."

"Well I've received one pod and I'd like you to play it. That's why I'm firing you from being our arcade attendant and hiring you as our blogger for Zectas. You can just post your experiences inside Zectas via the video feed feature within the game."

Nash couldn't believe what he just heard. He also longed to try playing out ZECTAS as well. With all the hype and all, who wouldn't want to play the game. However there was no way he could afford such an expensive game.

There was also the mystery why there was a specific age restriction for the game. Wouldn't the company making the game lose a lot of potential players, missing out the younger kids and those older kids at heart?

The manager had the pod delivered to Nash's home. The ZECTAS installers have already done the initial set up and all that was needed was for Nash to use the pod.

This is Nash's first time playing a VRMMORPG he hasn't even played an MMORPG on a desktop before. He wanted to do some research first before jumping into the game.

Nash found out the basic things about the game. There are attributes that would determine your performance on different actions.

Those are the basic attributes that everyone in the game started out with. There was also talk about other hidden attributes that you may get as you fulfill certain game requirements.

Nash continued reading on other basic information about Zectas.

The explored lands of Zectas was that of only 30% of the Zectas world and this was all in the central continent.

Nash also found out about jobs, races, alignments. There are so many choices that he wondered how long it would've taken to create such as a complex game like this.

Nash only wanted to find out about the absolute basic things in the game. He wanted to try discovering the many features this rich VRMMORPG has to offer.

After reading about the basics of the game Nash finally decided to step into the pod. He lied down attached the head visor and he closed the pod with excitement.

Nash was enveloped in a bright light. He saw his body from the outside. It was like an out of body experience. He then suddenly heard a voice.

"What is the race that you have chosen?"

Immediately his skin took on a dark purple color. His ears started to sharpen. And his clothing was changed into a ragged shirt and ragged shorts.

"What is your desired user name?"

"I'm sorry but that user name is already taken."

"Hmm... then how about Smoke then please."

"The city of Tezca in Thayotl Kingdom (East Kingdom) please."

"You have been registered as Smoke. Please remember that you can only have one account in ZECTAS"

Smoke then awoke besides a fountain that appears to be the center of a small village. He thought that with all the hype about how the big the world of Zectas is that a city would be bigger than this small hamlet.

An elderly old man took noticed of Smoke and approached him.

"Good day, Young dark elf. It is rare to see some one of your kind in our humble village."

"Good day to you as well sir. Is this the city of Tezca?"

"No no no. This is the humble village of Nanahuatl. We are but a small mining village. The great city of Tezca lies far east of here. In the Kingdom of Thayotl across the great lake of Orshere. Our village belongs to the Kingdom of Chayotl (West Kingdom). The nearest city would be the city of Coatl."

"If you're brave enough to face the forest and the mountains it may take you only 60 days. I know of a safe route that uses the plains and fields towards the city of Coatl. Let me indicate it on your Map. If you travel by foot it would take you around 100 days."

After receiving the system notification the Village of Nanahuatl was indicated on Smoke's map. He then found out just how far he is from the city of Coatl. Smoke was glad that at least he had a path to follow to avoid any dangerous monsters.

"Is it safe to travel towards that City of Coatl?"

"Well there are extremely strong monsters inside the forest and on top of the mountains that are really dangerous but if you stay on the route I indicated in your map you should be relatively safe. There are only horned rabbits, armored armadillos and some stray dire foxes on the fields and plains. But I warn you don't even try taking on a dire fox. Those things are 10x stronger than horned rabbits."