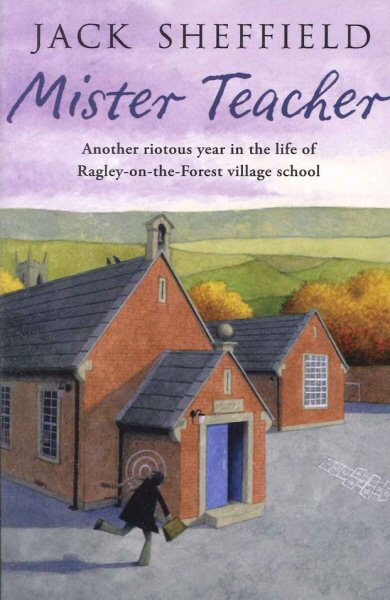 It’s 1978, and Jack Sheffield is beginning his second year as headmaster of a small village school in North Yorkshire. There are three letters on his desk – one makes him smile, one makes him sad and one is destined to change his life forever. This is from nine-year-old Sebastian, suffering from leukaemia in the local hospital, who writes a heartbreaking letter addressed to ‘Mister Teacher’. So begins a journey through the seasons of Yorkshire life in which the school is the natural centre of the community.

Vera, the school secretary who worships Margaret Thatcher; Ruby, the twenty-stone caretaker who sings like Julie Andrews; Dorothy, the coffee shop assistant who is desperate to be Wonder Woman; all these, and many more colourful characters, accompany Jack through the ups and downs of the school year. Most of all, there is the lovely Beth Henderson, a teacher from a nearby school, who with her sister Laura presents Jack with an unexpected dilemma.

1. Nits and the New Starters

2. The Sound of Ruby

5. Whistling John and the Dawn Chorus

7. A Gift for Jeremy

10. The Plumbers of Penzance

11. The Winter of Discontent

13. Mr Dibble and the Rubik Cube

19. Englebert and the Pet Show

I am deeply indebted to my editor, Linda Evans, and all at Transworld for their support, especially Stina Smemo, Katie Espiner and Sophie Holmes. Also, thanks go to my agent, the indefatigable Philip Patterson of Marjacq Scripts, for his hard work, good humour and deep appreciation of Yorkshire cricket.

There were three letters on my desk: one made me smile, another made me sad and the third was destined to change my life.

It was Friday, 1 September 1978, and I was alone in the school office. My second year as headmaster of Ragley-on-the-Forest Church of England Primary School in North Yorkshire was about to begin.

I picked up a brass letter-opener and looked at the first envelope. The flowing, expansive handwriting was distinctive and the Northallerton postmark confirmed it could only be from the formidable Chair of the Education Committee, Miss Barrington-Huntley. I unfolded the thick cream writing paper and underneath the impressive coat of arms her busy script raced powerfully across the page.

I do hope you have had a restful summer break. Congratulations on your successful first year in headship
.

I shall be visiting your school to make an assessment of your premises on Monday, 9 October at 9.00 a.m
.

(Chair of the Education Committee)

PS On this occasion I shall not be wearing a hat!

On that occasion, she had been accompanied by Beth Henderson, a local deputy headmistress who had been seconded for one year to support English and Physical Education in primary schools. After a whirlwind romance at the end of the summer term, Beth and I had driven off into the sunset in my Morris Minor Traveller for a holiday in France. Two carefree weeks later, I had left her at her parents’ house in Hampshire, where Beth had decided to spend the end of the school holiday, and I had returned to Yorkshire.

To my surprise the second letter was from her. It was written on floral-patterned, lilac-coloured paper.

I’m sorry to be writing instead of phoning, but I wanted you to have time to think this through before I return to Yorkshire
.

As you know, my next career move is to look out for headships of small village schools. There’s a lovely school down here in Hampshire in need of a headteacher and I’ve decided to apply!

Looking forward to telling you all about it!

With a tinge of sadness in my heart I sighed and stared at the address. Hampshire seemed such a long way off. I suddenly realized that Beth had become an important part of my life. She was different from any other woman I had known: dynamic and exciting. With my mind elsewhere, I picked up the third envelope.

It had a York postmark and felt bulky. Inside was a handwritten letter on crisp white hospital letterhead. It read:

Following the success of last year’s pen-friend project
with
the local special school, I wondered if we could arrange something similar with the Children’s Ward in York Hospital. We have a small number of children with very serious illnesses who would benefit from contact with children of their own age. If you can help, please let me know and I’ll call into school to arrange the details
.

I also enclose a letter from a wonderfully creative little boy called Sebastian, age 9, who has leukaemia
.

With best wishes for the new school year
,

Sue Phillips was a very active member of our Parent Teacher Association and, in between shifts at the hospital, she was also our school nurse.

I looked inside the package and took out a small bright-yellow envelope on which the words ‘MISTER TEACHER’ were scrawled in thick pencil.

It was a letter I would keep throughout my career. It read:

My name is Seb. I am nine years old. I am in hospital. There is something wrong with my blood. I have no hair and I feel poorly
.

I have three wishes. The first is to be an artist. The second is to make a snowman. The third is to go on a magical journey with a special friend
.

Mrs Phillips says I should write to you
.

I stared at the letter for a long time, folded it carefully and replaced it in the envelope. Then I unlocked the bottom drawer of my desk, put the envelope there for safekeeping, and took out the large, leather-bound school logbook. I opened it to the next clean page, filled my fountain pen with black Quink ink, wrote the date, and stared at the empty page. The record of another school year was about to begin.

A year ago, the retiring headmaster, John Pruett, had told me how to fill in the official school logbook. ‘Just keep it simple,’ he said. ‘Whatever you do, don’t say what really happens, because no one will believe you!’

So the real stories were written in my ‘Alternative School Logbook’. And this is
it!

Nits and the New Starters

86 children were registered on roll on the first day of the school year. The school nurse completed a head-lice inspection. Skateboards were banned following a directive from County Hall
.

Mrs Brown was our least favourite parent and had the build and manner of a raging buffalo. It didn’t seem to be the right moment to correct her use of a double negative.

‘What seems to be the problem, Mrs Brown?’ I removed my Buddy Holly spectacles and polished the lenses in an attempt to look composed.

She advanced through the office doorway, dragging four-year-old Damian with her. Clutching a Curlywurly bar, he was cheerfully oblivious of the chocolate and sticky toffee smeared across his face.

‘Them little buggers are everywhere. My Eddie says a midget bit ’im last night in t’back seat of ’is car. So ah want summat done!’

I took a deep breath and tried to remain calm. ‘We’ve heard about the outbreak of head lice in the village, Mrs Brown, and the school nurse will be in this afternoon to do a check on all the children.’

‘Well, she better do it reight!’ yelled Mrs Brown. She yanked little Damian’s arm, causing his Curlywurly bar to leave a chocolate skid mark on my office wall, and rumbled out into the entrance hall. As I closed the door I heard her final tirade: ‘We never ’ad no nits when Mr Pruett was ’eadmaster.’

I glanced up at the clock on the office wall. It was exactly 8.45 a.m. on Tuesday, 5 September 1978, and my second year as headmaster of Ragley Church of England Primary School in North Yorkshire had begun.

Back in the sanctuary of the staff-room, Ragley’s other three teachers were collecting their new class registers from Vera, the secretary.

Anne, a slim, attractive brunette in her mid-forties, was a superb deputy headmistress. She taught the youngest children in school in Class 1 and Damian Brown was one
of
six four-year-olds about to start full-time education in her class.

‘Yes, and she’s just about blamed me for the arrival of head lice in the village.’ I picked up my old herringbone sports jacket from the back of a chair, frowned at the worn state of the leather patches on the sleeves, and straightened my brand-new tie.

Sally Pringle passed me a mug of coffee. ‘Nice tie, Jack,’ she said, nodding towards my fashionable flower-power tie sporting a bright pattern of yellow daisies.

Sally, the lower junior class teacher, was a tall, curly-haired thirty-something who clung to the last vestiges of her rebellious hippie days. She took her hands out of the pockets of her purple tie-dyed apron, which clashed violently with her frilly lime-green blouse and buttercup-yellow waistcoat, and grinned at Vera.

‘What do you think, Vera?’ asked Sally.

Vera Evans, a spinster in her mid-fifties, had been the school secretary for over twenty years and her opinion was always important.

Vera pressed the creases from the skirt of her immaculate Marks & Spencer’s two-piece navy suit, and distributed the new registers.