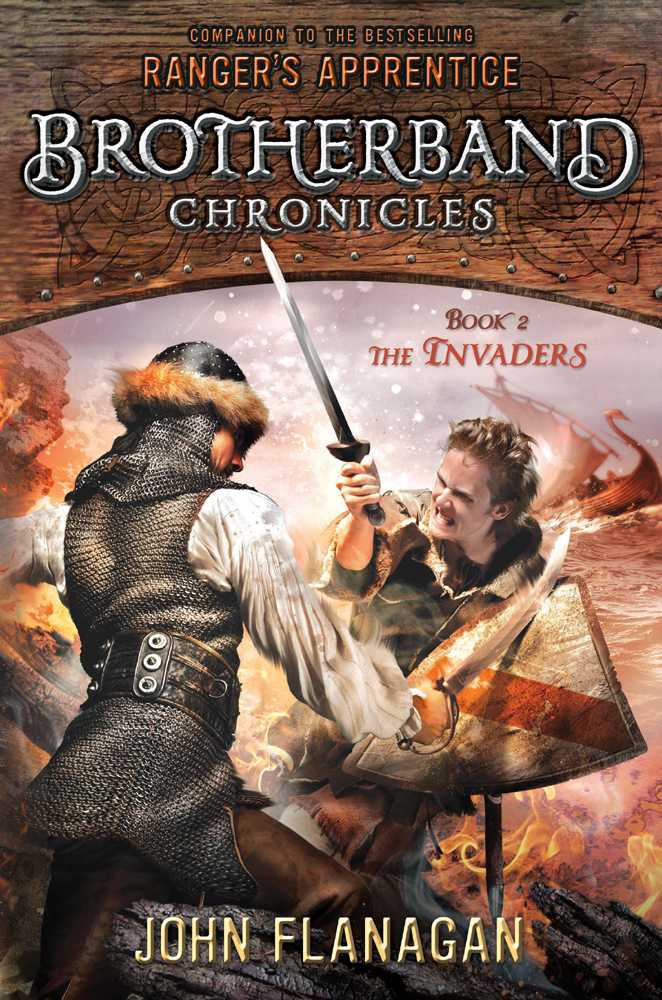 The adventure continues in the Ranger's Apprentice companion trilogy!

Hal and the Herons have done the impossible. This group of outsiders has beaten out the strongest, most skilled young warriors in all of Skandia to win the Brotherband competition. But their celebration comes to an abrupt end when the Skandians' most sacred artifact, the Andomal, is stolen--and the Herons are to blame.

To find redemption they must track down the thief Zavac and recover the Andomal. But that means traversing stormy seas, surviving a bitter winter, and battling a group of deadly pirates willing to protect their prize at all costs. Even Brotherband training and the help of Skandia's greatest warrior may not be enough to ensure that Hal and his friends return home with the Andomal--or their lives.

A division of Penguin Young Readers Group. Published by The Penguin Group.

Copyright © 2012 by John Flanagan. Illustration copyright © 2011 by David Elliot. Published in Australia by Random House Australia Children’s Books in 2012. First American edition published in 2012 by Philomel Books. All rights reserved. This book, or parts thereof, may not be reproduced in any form without permission in writing from the publisher, Philomel Books, a division of Penguin Young Readers Group, 345 Hudson Street, New York, NY 10014. Philomel Books, Reg. U.S. Pat. & Tm. Off. The scanning, uploading and distribution of this book via the Internet or via any other means without the permission of the publisher is illegal and punishable by law. Please purchase only authorized electronic editions, and do not participate in or encourage electronic piracy of copyrighted materials. Your support of the author’s rights is appreciated. The publisher does not have any control over and does not assume any responsibility for author or third-party websites or their content.

Published simultaneously in Canada. Printed in the United States of America.

COMPANION TO THE BESTSELLING 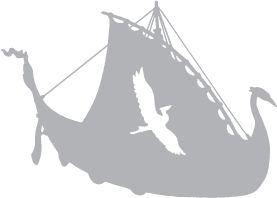 Book 1: The Ruins of Gorlan

Book 4: The Battle for Skandia

Book 5: The Sorcerer of the North

Book 6: The Siege of Macindaw

Book 8: The Kings of Clonmel

Book 10: The Emperor of Nihon-Ja

To my brother Pete, who made the 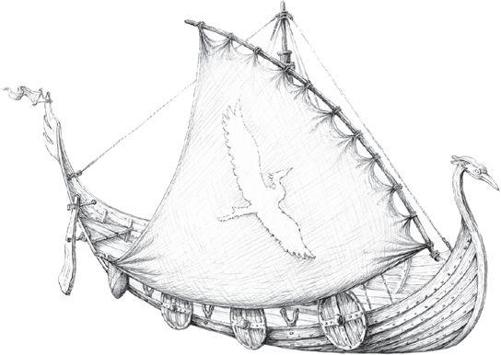 B
ecause this book involves sailing ships, I thought it might be useful to explain a few of the nautical terms found in the story.

Be reassured that I haven’t gone overboard (to keep up the nautical allusion) with technical details in the book, and even if you’re not familiar with sailing, I’m sure you’ll understand what’s going on. But a certain amount of sailing terminology is necessary for the story to feel realistic.

So, here we go, in no particular order:

Bow:
The front of the ship, also called the prow.

Stern:
The rear of the ship.

Port and starboard:
The left and the right side of the ship, as you’re facing the bow. In fact, I’m probably incorrect in using the term
port
. The early term for port was
larboard
, but I thought we’d all get confused if I used that.

Starboard
is a corruption of “steering board” (or steering side). The steering oar was always placed on the right-hand side of the ship at the stern.

Consequently, when a ship came into port it would moor with the left side against the jetty, to avoid damage to the steering oar.
One theory says the word derived from the ship’s being in port—left side to the jetty. I suspect, however, that it might have come from the fact that the entry port, by which crew and passengers boarded, was also always on the left side.

How do you remember which side is which? Easy.
Port
and
left
both have four letters.

Forward:
Toward the bow.

Aft:
Toward the stern.

Fore-and-aft rig:
A sail plan in which the sail is in line with the hull of the ship.

Hull:
The body of the ship.

Keel:
The spine of the ship.

Steering oar:
The blade used to control the ship’s direction, mounted on the starboard side of the ship, at the stern.

Tiller:
The handle for the steering oar.

Yardarm, or yard:
A spar (wooden pole) that is hoisted up the mast, carrying the sail.

Masthead:
The top of the mast.

Bulwark:
The part of the ship’s side above the deck.

Oarlock, or rowlock:
Pegs set on either side of an oar to keep it in place while rowing.

Telltale:
A pennant that indicates the wind’s direction.

Tacking:
To tack is to change direction from one side to the other, passing through the eye of the wind.

If the wind is from the north and you want to sail northeast, you would perform one tack so that you are heading northeast, and you would continue to sail on that tack for as long as you need.

However, if the wind is from the north and you want to sail due north, you would have to do so in a series of short tacks, going back and forth on a zigzag course, crossing through the wind each time, and slowly making ground to the north. This is a process known as
beating
into the wind.

Wearing:
When a ship tacks, it turns
into
the wind to change direction. When it wears, it turns
away
from the wind, traveling in a much larger arc, with the wind in the sail, driving the ship around throughout the maneuver. Wearing was a safer way of changing direction for wolfships than beating into the wind.

Running:
When the wind is from the stern, the ship is running. (So would you if the wind was strong enough at your back.)

Reef:
To gather in part of the sail and bundle it against the yardarm to reduce the sail area. This is done in high winds to protect the sail and the mast.

Trim:
To adjust the sail to the most efficient angle.

Halyard:
A rope used to haul the yard up the mast. (Haul-yard, get it?)

Stay:
A heavy rope that supports the mast. The
backstay
and the
forestay
are heavy ropes running from the top of the mast to the stern and the bow (it’s pretty obvious which is which).

Sheets and shrouds:
Many people think these are sails, which is a logical assumption. But in fact, they’re ropes. Shrouds are thick ropes that run from the top of the mast to the side of the ship, supporting the mast. Sheets are the ropes used to control, or trim, the sail—to haul it in and out according to the wind strength and direction. In an emergency, the order might be given to “let fly the sheets!” The sheets would be released, letting the sail loose and bringing the ship to a halt. (If
you
were to let fly the sheets, you’d probably fall out of bed.)

Way:
The motion of the ship. If a ship is under way, it is moving according to its course. If it is making leeway, the ship is moving downwind so it loses ground or goes off course.

Back water:
To row a reverse stroke.

The Paid Companion by Amanda Quick
The Outworlder by S.K. Valenzuela
THE SAGA OF THE DEAD SILENCER Book 1: Bleeding Kansas: A Novel Of The Zombie Apocalypse by AIKEN, L.ROY
Wind-Scarred (The Will of the Elements, Book 1) by Sky Corbelli
The Culture Code by Rapaille, Clotaire
Kissing Brendan Callahan by Susan Amesse
This One Is Mine: A Novel by Maria Semple
Circles the Trilogy (Secrets and Lies) by Buchanan, Carla
Blightcross: A Novel by C.A. Lang
Bound (Bound Hearts #1) by S. N. Garza
Our partner