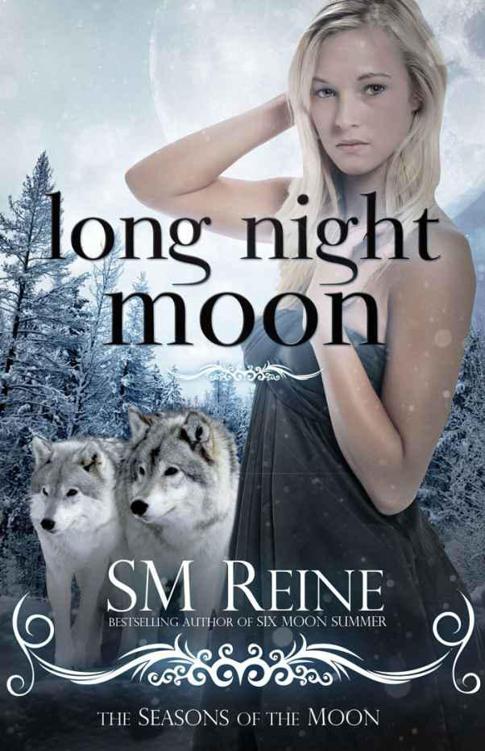 Gwyneth had run too long. She couldn’t do it anymore.

Her feet slipped on the snow, and she shrieked as she tumbled down the hill. Rocks and branches battered her body. Her hands scrabbled for purchase and found nothing. She bounced over a boulder and hit the bottom in a snowdrift.

Something approached her. The heavy thump of footfalls were like nails in the lid of a coffin, and Gwyn raised her head to stare her hunter in the face.

The wolf circled. Its hackles lifted into thick spikes, and every huffing breath fogged the frigid air. Chunks of ice stuck to its lower legs and between its paw pads, and blood matted its face.

“Please… don’t do this.” Gwyn’s voice shook with cold and fear. A low rumble rose in the wolf’s throat, lips peeling back as it stepped closer.

Gwyn hadn’t believed. She had denied everything her niece said. It was impossible—full moons and werewolves and monsters. She lived in a rational world. A world of ranching. Herding, hard work. There was no such thing as magic.

With a growl, the wolf leaped.

Seth knew it would be a long day when he found blood in the fields.

Blood was never a good sign, since it often meant Rylie had gotten into the pastures again and eaten something she would regret. He could already hear her long speech about the innocence of cows again. It had been kind of cute… the first three times.

But this was different. He had never found so much blood after a moon. It was splattered over the frozen surface of the duck pond with a dark cherry sheen, like hard candy, and he didn’t think it belonged to a cow.

He glared at his cell phone. When human bodies became involved, he had to call the police. Cops would mean an investigation, and if they saw him with a gun, he would have to answer a lot of questions.

It would be a long day. Seth hated long days.

He trudged around the duck pond in calf-deep snow, keeping the blood in his periphery. There weren’t any paw prints around the pond, nor were there the other normal signs of a werewolf attack. There should have been claw marks on everything. Frenzied werewolves liked to leave marks.

Plus, there was no body. If a human died, it wasn’t Rylie’s fault, and that was almost worse. It meant his werewolf girlfriend wasn’t the only dangerous thing in the night.

“This won’t be good,” he muttered.

He tracked the blood away from the pond, across the pastures, and into the fields of a neighboring farm. He picked the trail of blood up a few yards down, where it smeared for a few feet.

He didn’t have to go far to find the source. Seth crossed the field and entered the thicket at its edge. Naked trees made skeleton shadows on the ground, and the fingers of the branches all pointed at one thing—the body of a farmer, half-buried in snow with his throat torn out.

Yeah. It was
definitely
going to be a long day.

Rylie would never get used to waking up outside.

She stretched out in a snowdrift, reaching her hands high over her head and flexing her toes so every muscle went taut. She felt like she had been beaten up. Her skin was battered and sore, but unmarked.

Sitting up, she peered around the fields in the light of early dawn. Snow stuck to her hair. Rylie recognized the ridge to the south, but all her normal landmarks were masked in a thick layer of snow. She had no idea whose property she was on.

And where was Seth? He usually tracked her all night so he could be close when she woke up, but there was no sign of him this time. The only footprints nearby were in the shape of wolf paws.

She got up and brushed the snow off her skin. Even though she was wet and her hair had frozen, she wasn’t cold yet. The change kept her warm.

Tilting her head into the still air, she took several short sniffs. The colors of winter splashed through her mind: the chill of ice, rabbits warm in their dens, and the flowery smell of cheap perfume.

But there was another scent, too. It was the kind of smell that caught the attention of the wolf inside her, even though it should have been sleeping after a new moon.

Blood. Lots of it.

She was torn. Rylie needed her clothing before she got cold—or worse, before someone saw her streaking through the snow—but the blood smelled sticky-sweet and delicious, and she was so hungry.

Rylie jogged across the hills. Steam drifted off her skin and plumed around her mouth. Even though she was sleepy and sore, the call of blood made her push on.

More than a mile away, the smell became much stronger. It came from a large grove of trees.

And people were waiting on the east end.

Rylie hesitated before plunging inside. She ducked behind a thicket to keep herself hidden. Trucks with the sheriff’s logo were parked nearby, as well as an ambulance, and some other vehicles with government plates.

She sniffed again.
So much blood
.

Ignoring her better instincts, Rylie crouch-walked through the grove and followed her nose.

A man in a uniform appeared on the other side of a tree.

His back was turned, so he didn’t see her. “Jesus H. Christ, what a mess,” he muttered. “You ever seen something like this before, Mary?”

“What a mess,” echoed a woman that Rylie couldn’t see. She was blocked by a bush.

The officer moved, letting Rylie see around his legs.

At first, all she saw was meat, raw and dripping. It was laying there on the snow, waiting for someone to take it. Still fresh. Still warm. Her stomach growled so loudly that she was afraid the deputies might hear.

After a moment, her human mind kicked in.

The man shifted again, blocking Rylie’s view, but the corpse was branded into her mind. Her stomach lurched. Rylie clamped both hands over her mouth to keep from vomiting. Her shoulders heaved, and bile rose in the back of her throat. She couldn’t make a noise. She couldn’t get caught.

“Think it was a coyote?” Mary asked.

“Hard to say. I’ve never seen a coyote that vicious.”

Rylie slipped out of the trees again. She felt dizzy.

Motion on the hill overlooking the grove caught her eye. A dark figure at the top waved his hand, silhouetted by the rising sun. Even though he was too far away to smell, she recognized Seth, and he disappeared as soon as she waved back.

His message was clear. Rylie had to get away from the sheriffs.

She kept low as she followed the smell of her own perfume to the clothing she had hidden between rocks a half mile away. It was far enough behind the hill that the investigators couldn’t see, but she had to hurry. Finding a body meant they would probably sweep the whole area to find what killed him.

By the time she reached the rocks, her temperature started to drop, and the chill seeped into her bones. Her feet burned with cold. Her fingers became stiff and unresponsive. She hurried to pull the jeans over her legs, and they felt strange scraping over numb skin.

She had to blow on her hands until her fingers would bend before she could manage the socks and boots. Rylie skipped the shirt to put on the fur-lined jacket. She had initially refused to wear it, since she used to be a vegetarian and still hated animal products, but she was grateful for its warmth that morning.

“Sorry,” she muttered through chattering teeth, trying not to imagine any poor dead bunnies.

Rylie jerked the hood over her head, stuffed the shirt into her pocket, and trudged toward the road where Seth parked the truck. They reached it at the same time.

The windows were iced over, and its hood was covered in an inch of snow. He tossed his rifle inside.

“What happened?” she asked.

He grinned when he saw her buried deep in the oversized jacket. His slanted smile made her heart stop beating for a second. Seth was wearing all black as usual, and his freshly-trimmed hair accentuated the hard lines of his cheekbones and jaw. “You’re not cold, are you?”

“I’d like to see you spend all night naked one of these moons. Then we’ll see who’s cold.”

Rylie had to move Seth’s school books to get in the truck. He must have spent the night glued to his books. He was serious about semester finals, and determined to get all A’s on his report card, so he didn’t do much other than study.

He got in the driver’s seat. She pushed back her hood.

“You saw the body. What do you think happened? Someone got killed.”

“I got a good look before I tipped off the sheriff. His throat had been torn out, but it was too neat to be a werewolf. They’re savage when they attack,” Seth said.

“You mean,
I’m
savage when I attack.”

“It wasn’t you. I tracked you for half the night, and you stayed out in federal lands.” He didn’t look at her. “And none of him had been eaten. Like I said, you’re innocent.”

Rylie stared at her boots. “Oh.” He was right. She had gotten a few animals before, and she never left much behind. “Who died?”

Her hands flew to her mouth. “My neighbor? Oh God! That’s so close to my house! What if my aunt had been outside? What if—?”

Seth grabbed her hand. His touch spread warmth through her body.

“It wasn’t Gwyneth, so don’t worry about something that didn’t happen. There’s lots else to worry about anyway. If it wasn’t a werewolf that tore open Branson’s throat, then what was it?”

Rylie couldn’t answer that. She wasn’t sure she even wanted to know.

They rode back to the ranch without talking. Once the adrenaline faded, she was comfortable. A little too comfortable to stay awake, in fact. Rylie’s eyes soon fell shut and she slid onto Seth’s shoulder, dozing under the rumbling engine sounds.

She couldn’t fall completely asleep despite her exhaustion. The memory of smells and sensations from her night as a wolf flitted through her mind. Rylie never remembered anything of the change. The more she tried to recall details, the more they slipped away. But it haunted her like a nightmare she couldn’t escape.

Seth parked by Gwyn’s barn and let the truck idle. “Wait here for a few minutes.”

He got out. Rylie tried to relax while he did a couple chores around the ranch. Gwyn would already be awake, so she would assume an empty house meant they were out working, and she would be suspicious if they went to breakfast with nothing done.

As light crept over the fields and burned away the haze of early morning, she could make out Isaiah Branson’s fence. Rylie didn’t want to think of what would happen to his farm now that he was dead.

Seth fed the animals and shoveled the paths. Once he was done, he came back to the truck. “Let’s go inside, Rylie. I can smell breakfast.”

He half-carried her up the hill to her aunt’s house. After a long night running on all fours, her muscles felt like jelly. But that wasn’t really why she hung off him. She could have lived her entire life with his arm around her body. Seth was all leather and gunpowder, but he spent enough time around the ranch to pick up its familiar scents, and pressing her face into his shoulder was like smelling home.