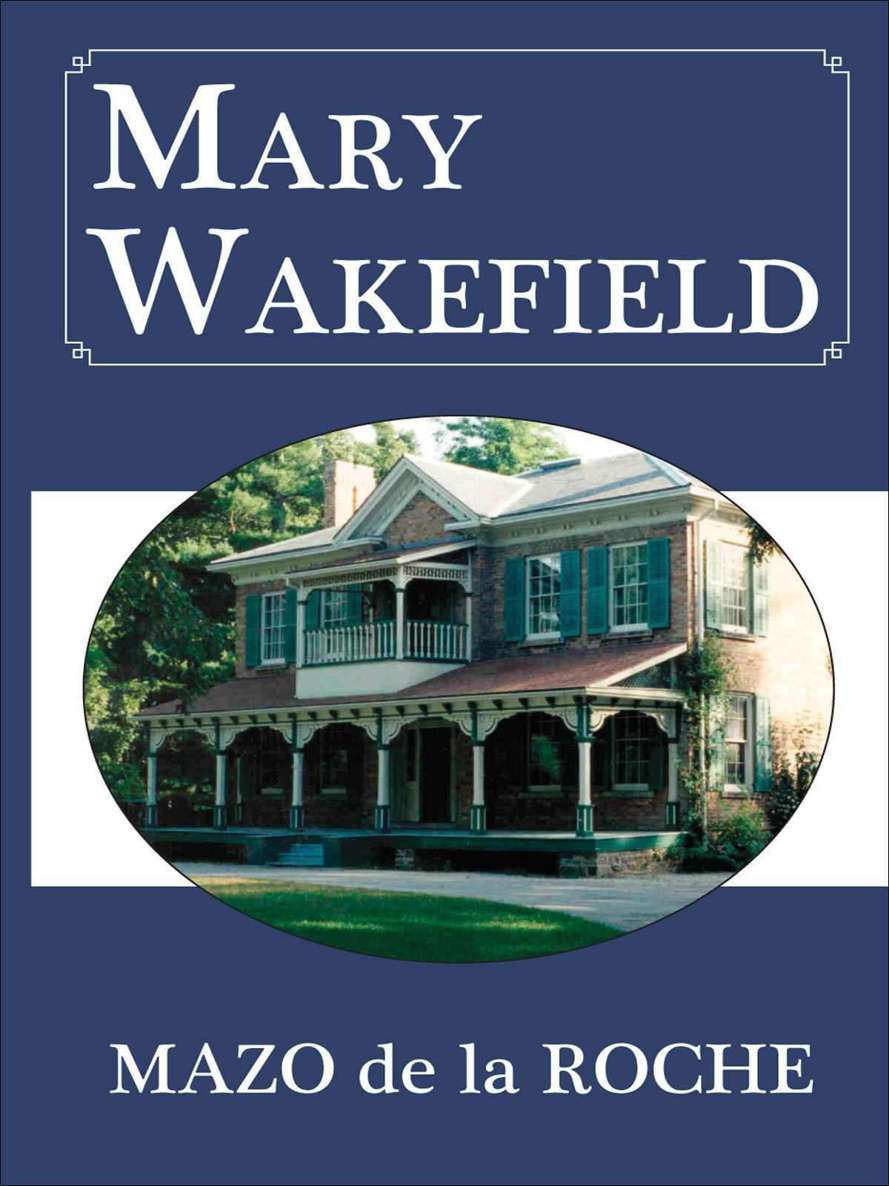 First published in Canada by Macmillan Company of Canada in 1949.

This 2009 edition of Mary Wakefield is published in a new trade paperback format.

We acknowledge the support of
The Canada Council for the Arts
and the
Ontario Arts Council
for our publishing program. We also acknowledge the financial support of the
Government of Canada
through the
Book Publishing Industry Development Program
and
The Association for the Export of Canadian Books
, and the
Government of Ontario
through the
Ontario Book Publishers Tax Credit
program, and the
Ontario Media Development Corporation
.

Printed and bound in Canada.
Printed on recycled paper.
www.dundurn.com

To Walter Allward
in friendship and homage

I
T
HE
G
OVERNESS

T
HIS WAS LIKE
no awakening she had ever had. She was in a strange house, among strange people, in a strange land. Her few belongings she had unpacked that lay scattered about the room, made it look all the stranger. Yet the day would come when all this would be familiar, when her belongings there would not look so alien, so pathetic; not that it was a grand room. It was just a comfortably furnished, moderately-sized room with a mahogany dressing-table and washing-stand with basin and ewer ornamented with red roses, a heavy white counterpane, an engraving of the Bridge of Sighs and another of Queen Victoria and Prince Albert with their young family about them. A Virginia creeper which she had noticed last night massed over the front of the house and enveloping the porch, had even extended its growth to this side and was spreading a few vigorous shoots across the window. From it the early morning sunlight took a greenish tinge.

Mary was glad she had waked early. She wanted time to lie still and collect her thoughts. Her mind appeared to her as a kaleidoscope that had been so shaken it could not regain its original pattern. The theme of that pattern had been her life in London with her brilliant but unstable father, a journalist who was always startling
editors either by his good or his bad writing. He seemed unable to do anything moderately well. He was always startling Mary by his high spirits or his deep melancholy. Her mother had died when she was a child so there had been no influence in her life to counteract these vicissitudes. She had come to wear rather a startled look when her eyes were not dreaming. Her eyes were grey, her fair hair so fine that it slipped from under hairpins in a disconcerting way but luckily had a natural wave in it. Her father had been proud of her beauty, so proud of it that the thought of her doing anything to earn her living had been abhorrent to him. Possibly pride in himself had had as much to do with it. Neither of them had been clearly conscious of the way he was going down hill physically till it was too late to save him. Then he was gone from her.

Now lying in this strange bed between the smooth linen sheets Mary rolled her head on the pillow at the anguished recollection of those terrible months of early spring. His bank account had seen him through his illness, little more. Mary remembered how he had thrown money about. But at the last he had spent it on little but drink. Events, struggling to be remembered, hammered at the door of her mind but she would not let them in. Now, on this June morning, she must be self-controlled, firm in the beginning of this new life. It lay spread before her like an unknown sea, upon which she, chartless, had embarked, no past experience to help her.

She had not wanted to be a governess. If she could have thought of any other way of earning her living she would have turned to it, but there were few openings for women in the nineties. The only work she felt capable of attempting, considering her ignorance and lack of experience, was teaching the young. The fact that she had had little to do with children did not trouble her. She thought of them as innocent little pitchers which she would fill with knowledge gained from text-books and coloured maps. She would set them to memorizing poems, lists of foreign countries, their capitals, rivers, capes, mountains and products. The important thing had been to get the situation. Once secured she felt equal to coping with it. In truth she had to find work or starve.

She had answered a number of advertisements and indeed had obtained interviews with several of the advertisers but they all had come to nothing. She had not the sort of looks, of manner, of voice, that made people want to have her as a governess for their children. In looks she was quite lovely, very tall and slender and very fair, with a skin so delicate that it seemed never to have been roughened by cold winds or to have lost its first beauty by exposure to the heat of the sun. But it was her smile that did the most harm. It lighted her face in the most extraordinary manner and then her mouth which had been wistful and almost melancholy, became alluring, gay and even provocative. She looked a dangerous creature to bring into the house where there was a grown-up son or even a husband.

If only she had known she could have subdued this smile and substituted an appropriately prim one for it but there was no one to warn her and before each interview was over she had given herself away — damned her chances. She had not the sort of face ladies looked for in governesses, in the last decade of the nineteenth century.

Her lack of proper references had been a handicap almost as great as her too charming looks. Her only reference had been from the editor of a newspaper for which her father had sometimes written. The reference had been based on the fact that Mary had once lived in his house for a month as companion to his docile little daughter while the child’s mother was ill. The editor had been very kind to Mary and when she required a reference, had made much of her stay in his house, her efficiency and her excellent way with children.

In reading over this reference Mary had not considered it as exaggerated. There was a spaciousness in her nature which made her feel capable of all that was written there. She found it no more than truth. Only after many rebuffs had her courage failed her and she had opened her newspaper and turned to the advertisements with less and less hope.

Now, with the sheet cool against her chin, she looked at the bunches of lilac on the wall-paper, held together by streamers of rose-coloured ribbon and remembered the morning in London,
less than a month ago, when she had been engaged to come to this house in Canada. Then too the air had been bright with sunshine. The sound of horses’ hoofs which marked the rhythm of the life of London had seemed to have a new vitality. Drays, drawn by heavy horses, rattled over the cobbles, buses and four-wheelers and hansoms, drawn by well-fed, well-groomed horses, made the streets lively, giving an air of temperate activity and prosperity. The very breeze coming in at the open window had fresh life in it and a tremor of new hope ran through Mary’s nerves as she scanned the advertisements.

Almost at once her eyes were caught and held. She read:

“Wanted a capable governess to go to Canada and take complete charge of two children. Passage and all expenses paid. Only a woman of firm character need apply. Call at Brown’s Hotel, asking for Mr. Ernest Whiteoak.”