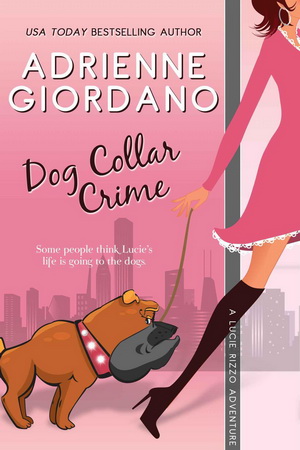 Out of work and down on her luck, Lucie Rizzo is forced to do the one thing she’s long avoided—move home to her nutty, mob-infested family. A move that brings her back into the tempting arms of Frankie Falcone, the ex that never fails to make her heart sit up and beg.

When Lucie parlays her temporary dog-walking gig into a career making fancy dog accessories, Frankie becomes her number one supporter. Life starts to look like a walk in the park…until three of her bling-wearing clients are dogjacked.

Despite help from the on-again, off-again Mr. Fix-It in her life, Lucie is thrown into an investigation that’s more
Goodfellas
than good doggie. One that could shatter her new life and her second chance at love.

On a lovely March day—if such a thing existed in Chicago—Lucia Rizzo led Miss Elizabeth, a Yorkie possessing the confidence of a runway model with a good boob job, across State Street’s lunchtime traffic and was nearly pancaked.

“Slow down!” she hollered at the errant driver.

A terrified Miss Elizabeth cowered on the sidewalk and Lucie scooped her up for a nuzzle. “Poor baby. I’m so sorry.”

Maybe this dog walking thing wasn’t so bad. Heaven knew the investment bankers in Lucie’s old office never got their faces licked during the workday. And if they had, surely a sexual harassment suit would follow.

Speaking of investment banking
… “Okay, girl, playtime is over. You need to poop so I can get home and look for a job.”

She glanced at her watch. No time for delays in an already packed schedule.

The sound of heavy breathing pelted Lucie’s ears and she glanced over her shoulder to see a man on her heels. Some people had no respect for personal space. She gave him the Lucie Rizzo version of the narrow-eyed back-off-bub look. When the man didn’t respond to her obvious warning, she darted ahead, but Miss Elizabeth flopped to the ground with an effort that sent her sequined barrette dancing in the sunlight. Fabulous.

Lucie stared at the dog. “Get moving, girl.”

The dog could have been a statue.

A man wearing a red warm-up jacket strode toward them, his eyes focused on Miss Elizabeth in a way that caused a prickle of unease to snake up Lucie’s spine. Another space invader?

She reached for the dog, but hands clamped on her shoulders from behind and shoved her sideways. Her heart jackhammered, and the shove carried her step by step by step until the side of a red Camry loomed in her vision.
Uh-oh. Incoming
. With the force of a line drive hitting a windshield, Lucie plowed headfirst into the parked car.

Pain slammed into her as she landed on all fours, her right knee taking the blow from the pavement before she rolled to her back. Swirling white birds flapped above. She blinked, realizing they weren’t birds but white spots from the whack to her head.

Had she been mugged? Couldn’t be. She didn’t have a purse.

Panic forced the hour-old kraut dog to lurch up her throat. She shifted to her knees, propped her hands under her and waited for the evacuation of her lunch. She let out a slow breath and stared at her hands.

She turned her head to where Miss Elizabeth should have been. Nothing. Could the dog have been under her when she fell? She hadn’t felt anything or heard a yelp.
Please don’t let me have fallen on her
. Lucie might be petite, but her hundred and ten pounds could still take out a three-pound dog. An image of the beloved Yorkie—lifeless—gripped her mind.

The sounds of traffic and car horns nearly blew Lucie’s aching head apart, but she peeked all around. No dog. At least she wouldn’t have to live with knowing she’d crushed Miss Elizabeth. A moment of relief sparked and disappeared.

The jerk that knocked her over had vanished and sent poor Miss Elizabeth into hiding. She couldn’t have gotten far. Her legs didn’t move that fast. Lucie dropped to the ground and checked under the cars. Nothing.

She ran to the corner, where a dark-haired man wearing a red jacket bolted through heavy traffic on State Street. She squinted hard and focused on a flash of glitter in the man’s arms. Miss Elizabeth’s sequined barrette.

“Help!” Lucie’s voice carried the high-pitched panic storming her body. “Stop him. He stole my dog.”

She stepped off the curb, but a middle-aged man in a business suit heaved her backward before a speeding cab tattooed her to the pavement. “Are you okay?”

“He stole my dog! That guy.”
Dammit
. The thief had turned the corner.

“What guy?” the man asked in a this-chick-is-nuts tone.

For a change, she didn’t care what anyone thought of her. All she cared about was losing Miss Elizabeth. “The one that’s gone.”

Fifteen minutes later, Lucie sat on a broken curb while the biting edge of anger and guilt morphed into emotional sludge.

Yes, at certain times in her life, she needed to maintain absolute emotional control.

This was not one of those times.

She drew a deep breath of Chicago’s eau de diesel fumes as a fresh line of cars turned off State Street. The rubberneckers, apparently fascinated by flashing lights on a police car, slowed to barely moving. Lucie dropped her head into her hands. Hiding would be the best way to limit eye contact with the gawkers.

The cop finished his conversation with dispatch and came around the back of the car.

Lucie’s gaze drifted to the name on the uniform that had seen one too many washings. The broken-in look suited the man—this Officer Lindstrom—who kept his dusty blond hair buzzed into a crew cut that accentuated his thick neck and linebacker build. A big boy.

The man’s blue eyes drilled into her. She recognized the narrow-eyed fascination that came with wondering if she was Joe Rizzo’s daughter.

Her father, being the accused in a long string of criminal trials, left the distinction of ‘mob princess’ sitting on her like an overweight elephant. This cop was probably judging her as a lowlife. She should be used to it by now, the presumptions about her heritage and character made by people who knew nothing of her work ethic. All because of her last name. All because of her father. The jailbird. Regardless, she was a citizen who had been wronged and deserved respect.

With that, Lucie snorted a half sob, half giggle.
What a lovely sound
. “You have no idea.”

“I’m sure. Anyway, we put out a BOLO. It’s still early so we might get a quick response.”

Lucie glanced up and squinted against the bright sun. “What’s a BOLO?”

“Be on the lookout. The BOLO is for a Yorkie wearing a rhinestone barrette.”

At least he didn’t laugh when he said it. Lucie closed her eyes, felt the swell of bubbling tears and let them fire down her cheeks. Crying. Just great.

With a vicious swipe, she swatted her cheeks and saw his face soften in a way that offered understanding.
He must be a dog owner
.

“I don’t know how it happened. We were walking along and—
bam
—I was on the ground and some goon was taking off with her.”

The panic rushed back, clawed at her for being so irresponsible that she’d lose a dog belonging to her most high-strung client. Well, she hadn’t actually
lost
the dog, but Lucie took the safety of her charges seriously, and this would certainly be her fault. What if the thieves hurt Miss Elizabeth? Lucie rubbed at a fresh batch of tears.
Idiot
.

Officer Lindstrom went back to his notes. “Ms. Rizzo, your dog’s name is Miss Elizabeth?”

“Call me Lucie. And she’s not my dog. I’m the walker. Tom Darcy is the owner.”

Lucie, awed by the fact that he appreciated
Pride and Prejudice
, glanced up. “You’re a Jane Austen fan?”

He winced. “Not me. My wife. I’ve seen that damned movie six times.”

His wife.
He’s married
. Not that Lucie was looking, considering she had Frankie, but—
wow
—a guy who’d sit through
Pride and Prejudice
six times. “It’s still impressive.”

He shrugged, tapped his pen on his notepad. “Is Miss Elizabeth a show dog?”

“There’s a dog theft ring operating in the city. They steal show dogs for ransom.”

Lindstrom’s radio crackled and he spoke into the microphone on his shoulder. He finished the radio call, pulled a card from his pocket and wrote something on it. “I need to run, but here’s my card and your case number. If this is tied to the theft ring, the case will go to a detective. If not, it’ll come back to me. Either way, someone will follow up.”

Lucie took the card. “Thank you. I appreciate your help.”

He jerked his head, started for his car, but turned back to her. “Is there someone you can call for a ride?”

A nice guy. Her father would never believe it of a cop. “That’s okay. I have my scooter at Mr. Lutz’s place.”

Lucie nodded. “I use a scooter to get around the city faster. My old boss lets me store it in his garage.”

“He’s trying to help. I was laid off six months ago. The dog walking helps pay the bills while I’m job hunting.”

Which was the reason she was sitting on this blasted curb wanting to skewer the bastard who stole Miss Elizabeth. Lucie mentally settled the queasies plaguing her belly. Maybe the whack on the head was messing with her stomach.

Lindstrom’s feet shifted in front of her. “You sure you don’t want to go to the hospital?”

As if this wasn’t embarrassing enough. “No. Thanks.”

“You should get that head checked out. At least go to your regular doctor.”

Lucie watched him jump into the car, flip on the lights and drive off. Part of her wished she could join him, because she now had to inform Tom Darcy his beloved pet had been snatched.

She slid her phone from her pocket. What would she even say?
Gee, Mr. Darcy, you still have a slew of
Pride and Prejudice
characters to choose from for the name of your next dog
.

With that, she ran to the garbage can on the corner and lost the kraut dog.

Lucie stepped through the front door of her parents’ Franklin, Illinois home and dropped her duffel at the base of the stairs. The entryway of the shoebox-sized living room closed in, the nearness suffocating her, while the pungent aroma of her mother’s garlic-infused roast beef filled the air. Lucie’s tender stomach seized.
Oi.

Most of her twenty-six years had been spent trying to escape this place, but six months ago, she had moved back.
How did I get here
?

Voices from the kitchen sparked a memory. The Falcone’s were here for dinner. Her mother had mentioned it that morning. Terrific.

She shifted to see Joey, her ape of a brother, sprawled across the sofa watching a March Madness basketball game. Frankie, her currently off-again-in-limbo-fiancé-slash-boyfriend—heck, she didn’t know what he was anymore, sat in the green wingback chair next to the sofa. For weeks, she’d managed to avoid him. Now, seeing him in his favorite chair, so comfortable in her mother’s home, the ache from missing him, the one she had learned to compartmentalize, broke free and cut off her air. “Hey,” she said.

All of the Lights by K. Ryan
Judith Krantz by Dazzle
Improbable Cause by J. A. Jance
Old Tin Sorrows by Glen Cook
33 Snowfish by Adam Rapp
Her Selkie Secret by Flora Dare
Silver Wedding by Maeve Binchy
Unstoppable Force (Force of Nature Series) by Barton, Kathi S.
The Calling by Deborah A Hodge
Denying Mr. Parks (The Parks #1) by Lilly James
Our partner