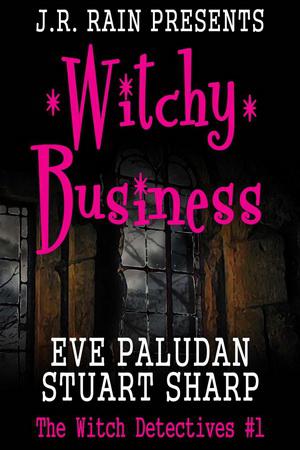 This ebook is licensed for your personal enjoyment only. This ebook may not be re-sold. Thank you for respecting the hard work of this author. All rights reserved.

My heartfelt thanks go to J.R. Rain for your energetic inspiration, encouragement and enthusiasm.

Stuart Sharp, thank you for your hard work as creator of the first book in The Witch Detectives series. I had so much fun with this collaboration. It is my honor and privilege to work with an author of your talent, caliber, credentials, and work ethic. — Eve Paludan

Creative license was taken with the subplot about a certain artwork by a famous artist. I don’t know where the real artwork is and my explanation is fiction. So, please suspend your disbelief and just imagine…
what if
. — Eve Paludan

-
Other Books by Eve Paludan

-
Other Books by Stuart Sharp

“What does your heart tell you?”

“You look like something the werewolf dragged in,” said Rebecca.

“Very funny!” I replied, brushing off clumps of bloody wolf hair from my filthy jeans and quilted bush jacket.

Rebecca was my liaison with the coven who kept me supplied with investigation jobs that utilized my unique talents. She leaned in and plucked a dead leaf from my hair then tossed it in the wastebasket by her desk. “It looks like you had quite the night camping out in the Highlands.”

“It was a dirty job, but someone had to do it.”

“I’m very impressed that you solved the case of the missing werewolf and got the ball rolling on an agreement to settle.”

“It’s all taken care of, Rebecca. I got Ferguson Black’s statement and gave the edited version of it to the insurers. I got the victim’s statement, too. It’s dealt with.”

“This was your first case involving a werewolf. Did Ferguson Black try to put the bite on you?”

I laughed. “Absolutely not.” Mostly because I’d used my talents to ensure that he didn’t. “By the time I finally found poor Fergie, he was lying in a ditch, covered in blood.”

“
His
blood?” The note of suspicion in Rebecca’s voice was typical. Part of her job was keeping an eye out for those supernatural beings who were potentially dangerous.

“Of course it was his blood. He’d just been in a car accident.” Actually, Fergie had been so relieved to see me that—even stuck in his wolf form—he’d just wagged his tail and whined. I’d told him who I was and that I was there to help. After he’d finished licking my hands, I’d called in the Highland rescue service.

“You still haven’t said how you ended up looking like…that,” Rebecca said with obvious distaste.

“Because the weather was so bad last night, the rescue chopper couldn’t come right away, and I didn’t want them there before I could help Fergie to transform, anyway. We had to hunker down while the sky drizzled on us for the night.”

“That explains the bad hair day and your wet doggy odor.”

“
Mea culpa.
So, what did you do with him all that time?” That question came with a smirk. Since when did Rebecca have a mischievous edge?

“He was too big for me to carry out of there and his leg was badly broken, so I just worked on keeping him calm until after the moon set and he could transform again. As you may imagine, that was where the conversation paused for a bit.”

That was mostly because werewolves’ clothes didn’t transform with them as they changed, leaving me to spend the night in a ditch with a naked Scotsman.

“I can imagine,” Rebecca said.

“I got to watch him transform, though.”

I shrugged. “You could put it like that. I didn’t know if I should run away or get out my iPad.”

Rebecca leaned forward. “
Did
you get any photos?”

“No! I was just kidding about getting out my iPad. That would have been…rude. I mean, yes, I’d saved him, but to video him?”

“I was thinking it might tell us more about the process,” Rebecca said. “How it works, what happens to the clothes. There’s too much we don’t know.”

That was the other part of Rebecca’s job, scouring my reports for details to take back to the coven. I wasn’t sure but the odds were that either Fergie’s clothes hadn’t survived the transformation, or he’d torn them off afterward. I did know that things had been pretty embarrassing for a moment or two when the rescue chopper came.

“So, you spent the night next to a naked man,” Rebecca said. “Did anything happen I should know about?”

“Hardly.” I shook my head. Mostly Fergie and I had just talked. About what he was doing out there, about his work as a solicitor up in Thurso. I guessed that another woman might have been tempted by him. I’d just lent him my jacket to keep off the cold. “He was kind of sweet.”

“He was an idiot, going out driving when he knew the moon was rising. What did he think would happen?”

“His elderly mother had phoned, saying she had fallen and couldn’t get up. What was he supposed to do?” I countered. “He was trying to race to her house before the moon rose. He just didn’t quite make it.”

Rebecca sighed. “Causing a pile-up in the process. We’re just lucky you were there to contain it.”

“And that he wasn’t more seriously hurt. He could have been killed.”

“But, Elle, werewolves don’t die, except from silver. And all that running about in the wilds…honestly, there are days when I wish supernatural creatures would
think
more.”

Surviving The Evacuation (Book 1): London by Tayell, Frank
The Preacher's Son #2: Unleashed by Jasinda Wilder
Relic of Time by Ralph McInerny
Another Dawn by Deb Stover
The Child Inside by Suzanne Bugler
Companions by Susan Sizemore
Ascent of the Unwanted (The Chronicle of Unfortunate Heroes Book 1) by Nathan T. Boyce
Contract to Kill by Andrew Peterson
Hopper by Tom Folsom
Bearly Ever: An Alpha Werebear Shifter Paranormal Romance (Arcadia Knights Book 1) by Olivia Gayle
Our partner