Miss Quinn, who cherishes her privacy, intends to spend Christmas on her own as she likes it. But before the holiday, her borther telephones to tell her that his wife has been rushed to the hospital, and would Miss Quinn come and stay with the children? Miss Quinn's unexpectedly hectic Christmas has a significant effect upon her life.

No Holly for Miss Quinn 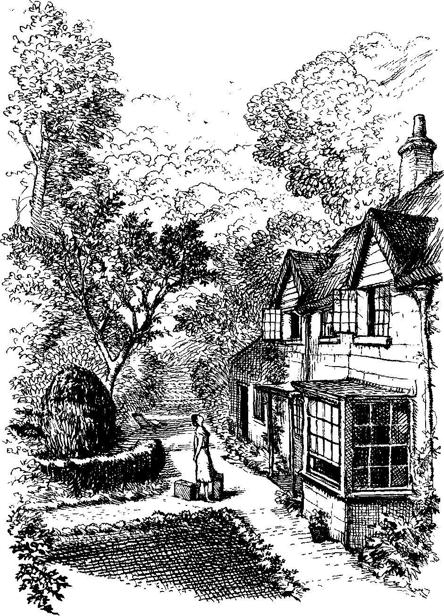 With Drawings by J. S. Goodall

All rights reserved. No part of this work may be re-
produced or transmitted in any form by any means,
electronic or mechanical, including photocopying and
recording, or by any information storage or retrieval
system, without permission in writing from the
publisher.

TO
Betty and Alan
WITH LOVE

I
F YOU TAKE
the road from the downland village of Fairacre to Beech Green, you will notice three things.

First, it is extremely pretty, with flower-studded banks or wide grass verges, clumps of trees, and a goodly amount of hawthorn hedging.

Second, it runs steadily downhill, which is not surprising as the valley of the river Cax lies about six miles southward.

Third, it loops and curls upon itself in the most snake-like manner, so that if you are driving it is necessary to negotiate the bends prudently, in third gear, and with all senses alert.

Because of the nature of the road, then, a certain attractive house, set back behind a high holly hedge, escapes the attention of the passer-by.

Holly Lodge began modestly enough as a small cottage belonging to a farming family at Beech Green. No one knows the name of the builder, but it would have been some local man who used the materials to hand, the flints from the earth, the oak from the woods, and straw from the harvest fields, to fashion walls, beams, and thatched roof. When the work was done, he chipped the date "1773" on the king beam, collected his dues, and went on to the next job.

It is interesting to note that the first occupant of the cottage when preparing for Christmas in that year would be unaware of the exciting events happening on the other side of the Atlantic, which would have such influence upon the lives of his children, and those who would follow them, as tenants of the farmer. The Boston Tea Party would mean nothing to him, as he brought in his Christmas logs for the hearth. But a hundred and seventy years later, Americans would live under that thatched roof, in time of war, and be welcomed by the villagers of Fairacre.

By that time, the modest two-up-and-two-down cottage had been enlarged so that there were three bedrooms and a bathroom upstairs, and a large kitchen below. The lean-to of earlier days, which had housed the washtub, the strings of onions, and the dried bunches of herbs for winter seasoning, had vanished. Despite war-time stringencies, the house was cared for and the garden trim, and the owner, John Phipps, serving with his regiment, longed for the day of his return.

It never came. He was killed in the Normandy landings on D-day, and the house was sold. It changed hands several times, and, partly because of this and partly because of its retired position, about a mile from the center of Fairacre, Holly Lodge always seemed secret and aloof. The people who took it were always "outsiders," retired worthies from Caxley in the main, with grown-up families and a desire for a quiet life in a house small enough to be manageable without domestic help.

The last couple to arrive, some two hundred years after the builder had carved his date on the king beam, were named Benson. Ambrose Benson was a retired bank manager from Caxley and his wife Joan, once a school mistress, was a bustling sixty-year-old. Their only son was up at Cambridge, their only daughter married with three children.

Fairacre, as always, was interested to see the preparations being made before the couple moved in. The holly hedge, unfortunately, screened much activity, and the fact that Holly Lodge was some distance from the village itself dampened the usual ardor of the gossip hunters. Nevertheless, it was soon learned that an annex was being built at one end of the house, comprising a sitting room, bedroom, bathroom, and kitchen, which would be occupied by Mrs. Benson's elderly mother.

Mr. Willet, caretaker at Fairacre School, sexton of St. Patrick's, and general handyman to the whole village, was the main source of such snippets of news about Holly Lodge as were available. The builder of the annex, although a Caxley man, was a distant cousin of Mrs. Willet's, and asked if her husband could give a hand laying a brick path round the new addition. 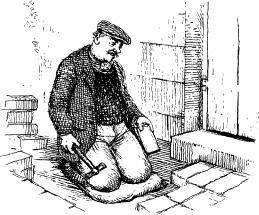 It was a job after Mr. Willet's heart. He enjoyed handling the old rosy bricks, matching them for color, aligning them squarely, and making a lasting object of beauty and use. All his spare time, in the month before the Bensons were due to take over, he spent in their garden at his task, humming to himself as he worked.

His happiness was marred only by his impatience with the dilatory and slapdash ways of the builders.

"To see them sittin' on their haunches suppin' tea," said Mr. Willet to his friend Mr. Lamb, the postmaster at Fairacre, "fair makes my blood boil. And that fathead of a plumber has left the new bath standing in the middle of the lawn so that there's a great yellow mark where the grass has been killed."

"Not the way those chaps are carrying on," snorted Mr. Willet. "Be lucky to get in by Christmas, if you ask me."

Mr. Willet's contribution to the amenities of Holly Lodge was finished before the end of August. The Bensons had hoped to be in residence by then but, as Mr. Willet had forecast, they had to await the departure of the plasterer, the painters, and the plumber.

At last, on a mercifully fine October day, the removal vans rolled up, and Fairacre had the pleasure of knowing that the newcomers had really arrived.

Joan Benson was soon studied, discussed, and finally approved by the village. She was a plump bird-like little woman, quick in speech and movement, given to wearing pastel colors and rather more jewelry than Fairacre was used to. Nevertheless, she was outstandingly friendly. She joined the Women's Institute and made a good impression by offering to help with the washing up, a task which the local gentry tended to ignore.

Even Mrs. Pringle, the village's arch-moaner, had to admit that "she'd settled in quite nice for a town woman," but could not resist adding that Time-Alone-Would-Tell. Ambrose Benson was not much seen in the village, but it was observed that the garden at Holly Lodge was being put into good shape after the ravages of the builders' sojourn, and that he seemed to be enjoying his retirement in the new home.

Mr. Partridge, the vicar of Fairacre, had called upon his new parishioners and had high hopes of persuading Ambrose Benson to take part in the numerous village activities which needed just such a person as a retired bank manager to see to them. How Fairacre had managed to muddle along before his arrival, Ambrose began to wonder, as he listened to the good vicar's account of the pressing needs of various committees, but, naturally, he kept this thought to himself.

"A charming fellow," Gerald Partridge told his wife. "I'm sure he will be a great asset to Fairacre."

The third member of the household was rarely seen. Joan's mother was eighty-seven, smitten with arthritis, and had difficulty in getting about. But the villagers agreed that she did the most beautiful knitting, despite her swollen fingers, and smiled very sweetly from the car when her daughter took her for a drive.

When the Bensons' first Christmas at Holly Lodge arrived, it was generally agreed in Fairacre that the vicar might be right.

Ambrose Benson, his wife, and mother-in-law could well prove to be an asset to the village.

The winter was long and hard. It was not surprising that little was seen of the newcomers. Holly Lodge, snug behind the high hedge which gave it its name, seemed to be in a state of hibernation. Joan Benson was seen occasionally in the Post Office or village shop, but Ambrose, it seemed, tended to have bronchial trouble and did not venture far in icy weather. As for old Mrs. Penwood, her arthritis made it difficult to get from one room to the other, and she spent more and more time in the relative comfort of a warm bed.

"I shall be extra glad to see the spring," admitted Joan to Mr. Lamb, as she posted a parcel to her daughter. "My husband and mother are virtually housebound in this bitter weather. I long to get out into the garden, and I know they do too."