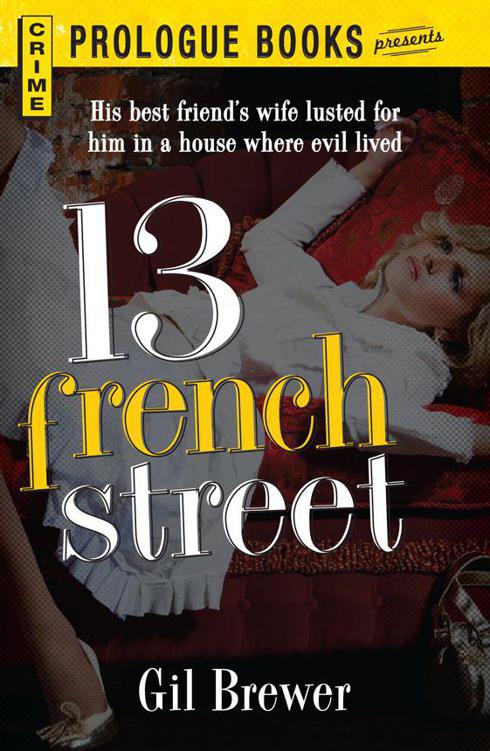 I held her against the tree. Her mouth slid away from mine along my cheek as she pushed away from me, her hands pushing against my chest, and she moaned.

I stepped back. “Petra!”

She watched me, leaning back against the trunk of the tree. Her lips were parted as she breathed, her eyes heavy-lidded. Her hands lay on either side of her against the tree trunk, trembling. “It’s as I thought,” she said. “Just as I thought. As I knew it would be.”

a division of F+W Media, Inc.

P
ETRA
’
S LETTERS
should have warned me. Those secret, smiling letters written in an overbold hand with violet ink on pale green perfumed paper, sealed in green envelopes. They should have been warning enough for anyone. And the house should have warned me. The minute I stepped through the doorway at 13 French Street, I sensed something wrong—something I couldn’t nail down. But she closed the door before I had a chance to run. So, you see, it was already too late. Only I should have run anyway….

I nodded but I didn’t speak. She leaned back against the door, one hand resting on the doorknob, the other fussing with the long V neckline of her black dress.

The long, broad hallway was deeply shadowed, though some of the early-autumn twilight filtered into the house. I could still hear the lazy rattle of leaves outside against the porch. The bite of burning leaves had entered the door with me. I remembered the red winking of the taxi’s taillight as it rounded a far corner, left me standing on the flagstone walk before the large, square, red brick house. Verne Lawrence’s home, 13 French Street.

Yes. Already I sensed the beginnings of panic. The first hint of futility and hopeless outrage.

“What do you think?” She smiled. I knew her lips were very red, but they looked black, there in that hallway. Her right hand left the doorknob, and I took it. It wasn’t shaking hands. It was holding hands. No, it was even more than that. Communication, from Petra to me.

She ignored it. She let go of my hand, stepped closer. The perfume she wore was faint, elusive. I remembered the letters. It was the same stuff. I’d smelled that perfume on her letters at least once a week for three years.

“It’s queer,” she said. “Never having seen you. Only the snapshot of you and Verne in uniform. The one you had taken in Paris. Your face was all in shadow, you know, so I thought you had dark hair. But you’re a regular tow-head. And those gray eyes—” She paused and shook her head slightly. “You’re a bigger man now, too. I’ll bet … Well, never mind. Anyway, Alex, you look like I expected—only better.” She smiled. “Well, let me take your coat, Alex.”

She helped me with my coat, held it in her hands a moment, then dropped it in a heap on a chair. I hadn’t moved from beside my two bags. I could feel the leather of one of them against my leg. It felt substantial, like the beach does after you’ve been swimming for a mile or so.

We looked at each other some more. I guess we had that much coming. That much of it wasn’t wrong.

She was tall, slimly provocative. All in black. Black hair, worn long, tumbling around her shoulders. Black eyes, all pupil, or all iris. Her skin was very white. Her black eyebrows arched slightly, making her eyes seem bolder than ever, and her smile had shock value. Long-legged, full-breasted, and the neckline of her dress reached down.
Down
. She was a bold, beautiful woman.

I didn’t tell her I had expected a white house with a white picket fence. I didn’t explain that I had always visualized her in a light cotton dress, maybe watering the flowers. Hell, there weren’t any flowers.

“He outdid himself. Where is Verne?”

She’d been speaking quietly, the tone of her voice soft, warm, full. Now it lost the softness, the warmth. “Oh, yes, Verne. Upstairs. He’ll be down. You didn’t tell us you
were
coming, you know. We’d have met you at the station.”

Somebody walked softly across the hall at the far end. I turned and saw a staircase leading upward and what looked like a while shawl vanishing through a doorway at the foot of the stairs.

Petra’s eyes had gone metallic. Then they were molten again. “Mother,” she said.

I wondered how much longer this was going to continue. I didn’t sense that something was wrong any more. I knew it for sure. But what?

“How long can you stay?”

She smiled. Every time she’d smiled at me it had been like the silent communication of her hand. She was saying, “That’s all you know about it.” She knew I knew what she meant. But I wasn’t bothered too much. Yet.

She acted all wrong. I mean, I figured Verne would be there, pounding me on the back, cracking out a bottle, with Petra saying, “Oh” and “Ah.”

“Alex, I feel I know you terribly well.”

So that’s the way it was. When she said something, you never knew what was going to come out. You never knew.

… and Verne would so much like to see you. It’s been five years now and he still talks of the good old times. He seldom writes anyone, Alex, so he’s left it up to me to keep at you until you visit us. He said you always did work too hard and that your fault is you’re too honest. Verne says a man can’t get ahead anyplace nowadays if he’s like that. You’re too serious. I know you don’t think I’m too forward in saying these things, Alex. But, Alex—let that museum go hang. You need a good vacation. Please come, Alex. We’ll have a grand time. I feel I know you so well, now. We’ve been writing each other for three years, Alex….

Pages. Page after page, every time. As if all she had to do in the world was write to me. An archaeologist with no place to dig and with no one to give a damn if he did dig—but with a dream. And a philanthropic gentleman in Chicago had the foresight and interest to help me realize this dream. A museum for the future to end all museums. It would take years, probably my whole lifetime, but it was what I wanted now.

… so I keep asking you, for Verne, to come and spend some time with us here in Allayne. We have a fine home, just outside of town—nearly a mile—lots of freedom. Alex, really. I simply won’t give up, Alex!

It sounded good. But there was the museum, and there was Madge, too. We weren’t engaged, but marriage wasn’t far off, either. Sure, I wanted that vacation. What the hell? So I finally decided to surprise them. I didn’t let them know I was coming till I called from the station. Here I was. Great.

Verne Lawrence hadn’t been out of the Army a week before he was married. I’d heard from him occasionally and we’d planned to get together after I finished some digging in Yucatan. But he never said much about his new wife, beyond the fact that she was beautiful and they were happy. After about two years he ceased writing, and Petra took over. I returned to Chicago and my dream.

I wanted to see Verne. He’d been a close friend and a good man—a good soldier, too. He was ten years older than I, making him about forty now. I wondered if he had changed.

I figured to spend a week with them. Verne and I would loaf and talk, while Petra mixed cocktails or opened beer cans. The hell with the museum, for the time being—the hell with everything. And Madge said, “Why, certainly, Alex. I agree. You should do something like that. You’ve been working much too hard. Then, when you come back, maybe …”

I turned toward the stairs again. I felt her hand on my arm and the fingers closed just once, not tentatively, but certain. Then her hand went away. I watched my old war buddy come toward us down the hall.

He looked as if somebody had machine-gunned his soul.

He ignored her, didn’t even glance her way. “Yes, by God! Sorry I kept you waiting, old man. Damned headache. Trying to—Well, say! You haven’t changed.”

The handshake. Flat out, once up, once down, release. He slapped me on the back. I don’t know how I sounded; I’ll never know. Verne Lawrence looked like hell. He was an old man, trying to suck in his guts and stick out his chest; trying to smile a smile that wasn’t there. Obviously.

I grinned. “Lucky fellow. She’s everything I—”

I was sick of it. I wanted to get out of there.

His eyes were haunted. Once he’d had blond hair; now it was a dirty, streaked gray. His face was lined, his mouth pulled down at the corners no matter how hard he tried to pull it up. His neck was wrinkled and his shirt collar didn’t fit. He was wearing a tweed suit and it hung over his frame like burlap over a broomstick; like those scarecrows you see in winter-blasted cornfields.

And Verne Lawrence had once been a big man with broad shoulders, a barrel chest, and a face like a slab of beef. Now his face was like breast of chicken, dried in a very hot sun.

All of this in five years….

“Should’ve let me come down and pick you up at the depot.”

“Already had the cab.”

“How long you here for?”

“What the hell kind of vacation is that?”

She was behind him, staring at me over his shoulder now. She dampened her lips with her tongue and her gaze was steady, patient.

“Five years,” he said. “Five years.” He shook his head, jammed his hands into his jacket pockets. Then he took one hand out and pulled at his lower lip. “You’re tired,” he said. “Jenny’s got your room ready.”

I started to tell him I wasn’t tired. But I knew he was. He was tired of having me here already. As tired as I was of being here.

“It would be best,” Petra said. She smiled at me over his shoulder.

The room was all right. Better than that. It was a corner room, on the left front. Big windows, with the late twilight of autumn blowing in. The breeze was balmy, and I suspected there’d be some warm weather coming. Not like Chicago.

So this was how you met the guys you knew during the war. This was what happened to them.